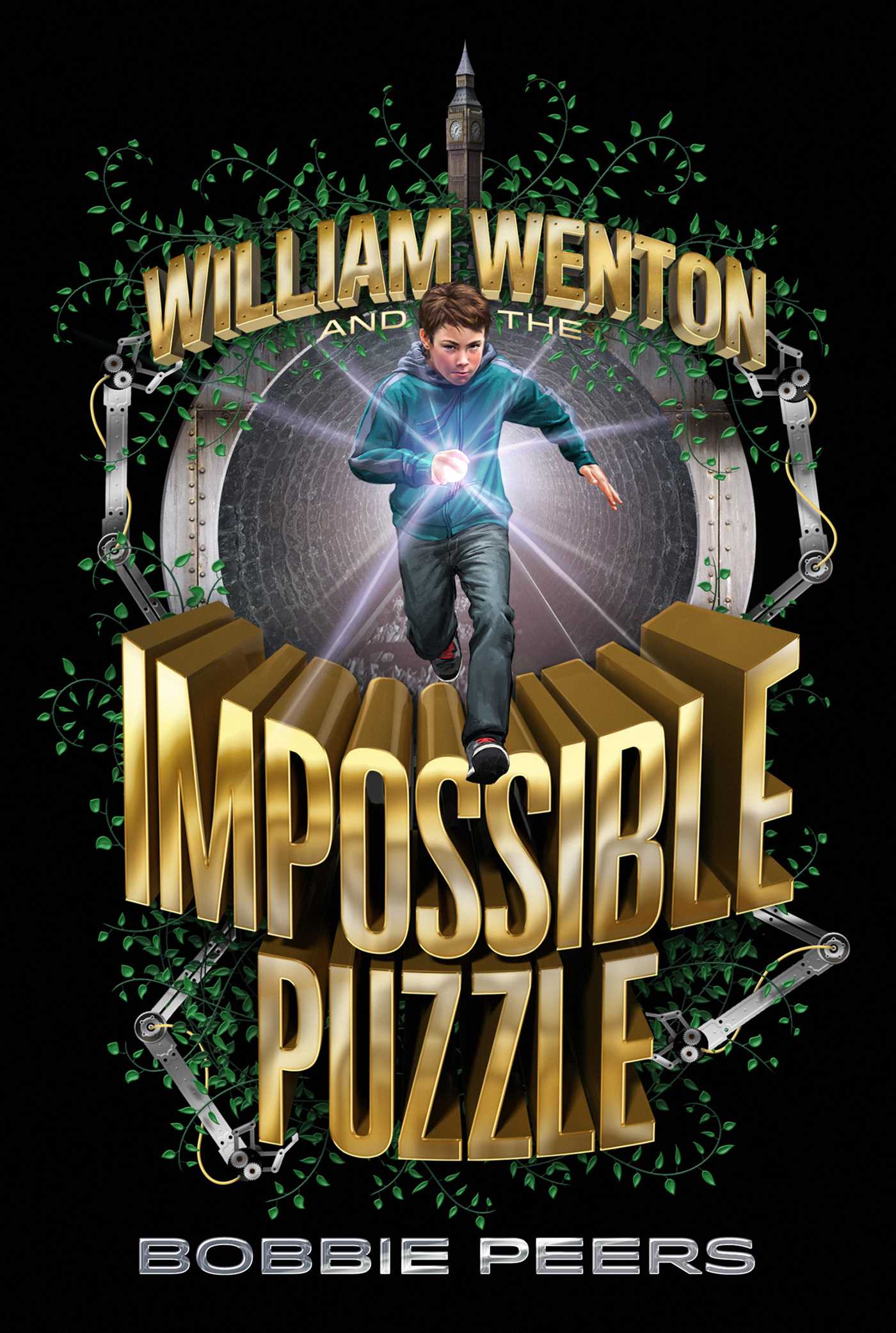 William Wenton and the Impossible Puzzle

“Part ‘Alex Rider,’ part ‘Artemis Fowl,’ part The Da Vinci Code” (School Library Journal), this award-winning novel tells the tale of a puzzle-solving genius who is forced to use his skills to face a danger that has been lurking in the background for years.

Twelve-year-old William Wenton is a puzzle-solving genius. He lives with his family in a quiet Norwegian town. They used to live in England, but eight years ago his family suddenly packed up, moved away, and even changed their last name! Neither of his parents will offer an explanation or tell William why he has to keep his talent for solving codes and puzzles a secret. But then a special exhibit comes to the local museum: the Impossible Puzzle. The experts say it is unsolvable, but William’s sure that he can crack it if he gets a chance.

However, when he does, everything begins to go wrong. Suddenly William is whisked off to a strange school filled with robots and kids whose skills are almost as good as his own. But what’s really going on? And what’s the secret involving William’s grandfather? And is there anyone he can trust?

AT A SECRET ADDRESS

William was so engrossed in what he was doing that he didn’t hear his mother calling him. He sat hunched over a massive desk. With a steady hand he tightened the final screw into a metal cylinder the size of an empty toilet paper roll. The cylinder was divided into several sections that were engraved with various symbols and inscriptions.

William held the cylinder up to the light and studied it with satisfaction. He picked up a newspaper clipping with a picture of a cylinder that looked like the one he was holding in his hand. It said THE IMPOSSIBLE PUZZLE: THE WORLD’S MOST DIFFICULT CODE IS COMING TO NORWAY. CAN YOU BREAK IT?

Even though William had already read the article hundreds of times, he read it again now. He glanced at the picture of the enigmatic metal cylinder. A group of the world’s best cryptographers had spent more than three years creating it. And now it was on its introductory tour with the tagline “world’s most difficult code.” It had the reputation of being impossible to crack. Some of the world’s smartest people had already tried—and failed. And now it had finally come to Norway, but after tomorrow night the exhibit would be moving on to Finland, so it was now or never.

“DINNER!” his mother yelled from the kitchen.

William didn’t react. In his defense, sound did not travel particularly well in this house. The walls of every room were covered in bookshelves that were jam-packed with books that had been inherited from his grandfather, along with strict instructions never to get rid of them. The books had been hauled over from England in seven big containers. William had read them all. At least twice.

His mother didn’t let up. William heard her now. She had said Olsen, William Olsen. He was just never going to get used to that name. He longed for the day when he could tell everyone his actual name: William Wenton.

He’d given up asking what really happened back in London eight years earlier. About why they were named Olsen now and had learned Norwegian. About why they lived here, of all places, and about what had happened to Grandfather. His parents had decided not to talk about it. As if all the secrets were better than the truth.

He didn’t know much about what had happened, but he did know that it had something to do with a car accident. The same car accident that had left his father paralyzed.

But there was more. Something so serious that their family had to disappear, and a thin little country that almost no one in the rest of the world could find on a map had been the perfect place to disappear to—for as long as it lasted.

“I just have to fix one little thing first . . . ,” William mumbled to himself.

Then it was his father’s turn to holler from the distance. “WILLIAM . . . IT’S TIME FOR DINNER!”

William delicately rotated the metal cylinder, feeling how the small pieces rested perfectly in his hands as if they understood him. He jumped when the door to his room suddenly flew open, hitting a tall stack of books and knocking them over. One of the books hit the cylinder, which slipped out of his hands, landed on the floor with a clank and started rolling. William was leaning down to pick it up when his father drove over the threshold in his electric wheelchair, on a collision course with the cylinder. William watched in dismay. A metallic crunch was the only sound as the full weight of one wheel drove over it. His father braked abruptly. The ruined electronics sparked, and a little cloud of smoke rose from the wreckage under the wheel. His father glanced down at his chair in irritation and wrinkled his nose.

“Is it playing up again? I just took it in to get it serviced,” he muttered to himself, and then turned his stern eyes to William, who moved his hand to cover the newspaper clipping on the desk.

“It’s time for dinner . . . NOW!” said his father before putting his chair in reverse, bumping into another stack of books, and then driving back out of the room.

William waited until the hum of his father’s stair lift faded before he stood up. He took a breath. That was close. But his father hadn’t seen anything, had he? William was quite sure that he’d managed to hide the newspaper clipping before his father noticed it. He walked over to the cylinder and picked it up. One side was crumpled in. He shook it a little.

“Really?” he said to himself, irritated, and glanced at a thick chain lock on the inside of his door. How had he forgotten to lock it? He always locked his door when he was working on code breaking.

William turned and walked back over to the desk. He opened one of the drawers and put the newspaper clipping and what was left of the cylinder into it. He stood there for a bit, staring at the other things in the big drawer: a mechanical hand he’d built himself; a 3-D metal puzzle; a completely normal Rubik’s Cube; and a shoebox that contained a soldering iron, some small screwdrivers, and a pair of pliers.

He closed the drawer and locked it with a key he hid in a crack between two floorboards. He gave the room a last once-over to make sure he’d stowed everything away.

For some reason or other his father hated cryptography. He’d forbidden any form of code-breaking activity. He wanted William to do the stuff normal children did: soccer, band practice, whatever. It was almost as if his father was afraid of codes and afraid that William would be interested in them. And it was just getting worse. Now his dad had started cutting the crossword puzzles out of the newspapers and burning them in the fireplace. That’s why William had started locking his bedroom door. So his father wouldn’t discover all the stuff he had hidden in his room.

If his father only knew how William felt some days. Sometimes all he could see around him were codes. Anything could actually be a code: a yard, a house, a car, everything he saw on TV or read in a book. They were all puzzles, and his brain took over. It could happen when he looked at a tree or the pattern in some wallpaper. Sometimes it was like things dissolved right before his eyes so that he saw each individual component and where it fit in. He’d been this way for as long as he could remember, and he often got in trouble because of it. That’s why he was happiest on his own. Preferably in his room, with the door locked, where he was in full control.

William stood there looking at the big desk, his grandfather’s desk. The desktop was made of dark ebony, one of the hardest woods in the world. In each corner there were carvings of demonlike faces, grimacing and sticking out their tongues.

William had been scared of the desk when he was little. But gradually as he got older, he became curious. The whole desktop was covered with strange symbols. William imagined that they were secret messages from his grandfather, who was one of the best cryptologists in the world. But William hadn’t managed to decipher the symbols yet. He hoped that someday he would understand them, that he would understand what his grandfather had written, and why.

“I’m coming!” William replied. And in two easy steps he was out of the room. 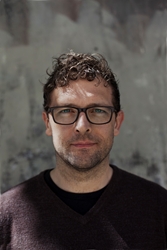 Bobbie Peers graduated from the London Film School in 1999 (known as the London International Film School at the time), and has since worked as a director, writer, and illustrator. His first short film, Sniffer, received the Palme d’Or for Best Short Film in Cannes 2006. In 2014, he made his feature film debut with The Disappearing Illusionist. He is the author of the William Wenton series.

" . . . this series opener is a gripping story from early on, and the wonky twists and turns ramp up the excitement as readers learn more about William’s family and this crazy metal at the core of the drama. . . .  " -

"Peers’ first novel follows the pattern of many such school and adventure stories—think Hogwarts with robots and carnivorous robotic plants—but there are plenty of twists to keep readers guessing. "

William Wenton and the Impossible Puzzle