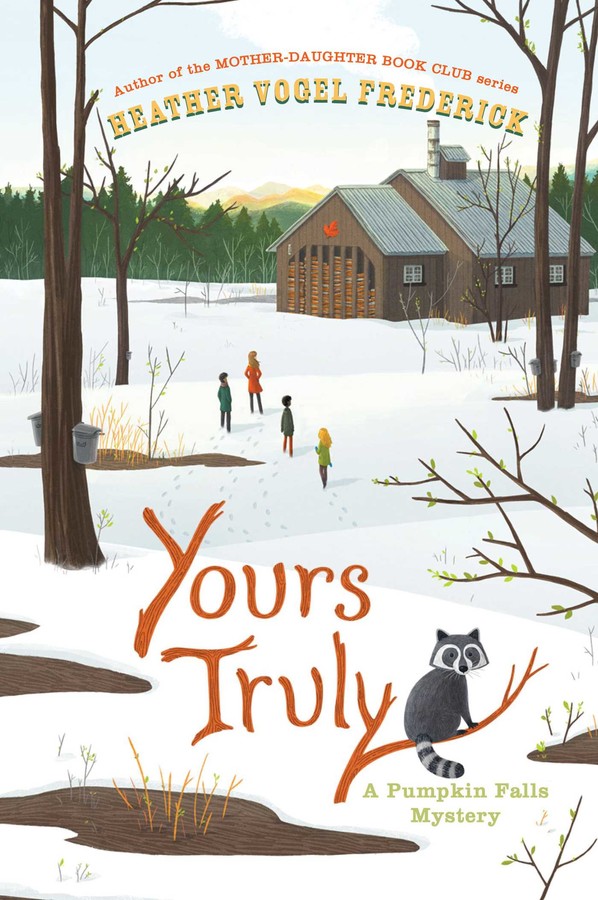 Another wild mystery needs to be solved and it’s up to the Pumpkin Falls Private Eyes to solve it in this hilarious follow up to the heartwarming middle grade mystery, Absolutely Truly.

Even Truly Lovejoy has to admit that teeny-tiny Pumpkin Falls, New Hampshire, has its charms—like the annual maple festival, where tourists flock from all over to sample the local maple syrup, maple candy, maple coffee, and even maple soap! But when someone tries to sabotage the maple trees on her friend Franklin’s family farm, Truly has to rally the Pumpkin Falls Private Eyes to investigate.

Meanwhile, she uncovers another, more personal mystery under the floorboards of her very own home—a diary written centuries ago by her namesake, the original Truly Lovejoy…and it might just prove her family’s ties to Pumpkin Falls run deeper than anyone ever could have imagined.

CHAPTER 1
“Knock it off, Lauren!” I stuffed my pillow over my head, trying to block out the noise on the other side of my bedroom door.

Sunday was just about my only day to sleep in, thanks to swim team. I was usually up and in the pool by zero dark thirty. Which was fine—no complaints. The pool had always been my happy place. But ever since my younger sister discovered a box of our aunt’s old Nancy Drew books up in the attic and started reading The Hidden Staircase, she’d been wandering around the house at odd hours tapping hopefully on the walls.

It was driving us all crazy.

“Lauren!” I hollered again, and this time the racket finally stopped.

Burrowing down under the covers, I squeezed my eyes shut and willed myself to go back to sleep. It seemed like I was tired all the time these days. My mother said it was a symptom of impending teenage-hood. Maybe she was right, because my older brothers would sleep all day if she and my father let them. And I was turning thirteen soon.

My eyes flew open. I sat bolt upright, flinging my pillow aside. How could I have forgotten? My birthday was today, not soon!

I swung my legs over the edge of the bed, toes scrabbling for the slippers that waited on the hardwood floor. Reaching for my bathrobe, I slipped it on and sniffed the air expectantly. Lovejoy family birthdays always started with one of Dad’s special breakfasts: scrambled eggs, bacon, and homemade sourdough waffles with real maple syrup. I’d been looking forward to it all week.

I shuffled across the room and out into the hall. There was no sign of Lauren, except for the fact that Miss Marple was sitting by my door, wearing a University of Texas T-shirt. Miss Marple is my grandparents’ golden retriever. We were taking care of her while my grandparents were in Africa.

“Hey, girl,” I said, and leaned down to give her a pat. She looked up at me and whined. Lauren loved dressing her up, but Miss Marple was not a fan.

I extricated her from the T-shirt, and she wagged her tail gratefully and followed me across the hall into my bathroom.

I still wasn’t used to having one of my very own. It was pretty sweet, especially after having to share one with my brothers and sisters for so many years. Two older brothers—Hatcher and Danny—and two younger sisters—Lauren and Pippa, to be exact, putting me smack-dab in the middle. My dad was retired military, and for as long as I could remember we’d lived in base housing—Alabama, Colorado, Germany, Texas. Now, though, we were living in my grandparents’ house, the one my dad grew up in. How we ended up here was kind of complicated, but the short version was, my father lost an arm in the war in Afghanistan, and because of that he lost his chance to be a commercial airline pilot, and partly because of that and partly because they wanted to, Gramps and Lola joined the Peace Corps and moved to Namibia so my dad could have a job running the family bookstore with his sister, and we traded our home in Austin for living here in their house. Complicated, right?

As Miss Marple settled happily onto the rug by the radiator, I got in the shower, humming the “Happy Birthday” song to myself and wondering if my parents had gotten me any presents. My cousin and best friend, Mackenzie, was my main gift—she was flying in from Texas tonight to spend Spring Break with me—but I’d spotted my mother sneaking a big bag inside the house yesterday, and I was pretty sure there was something for me inside.

Hopefully, it was the new feeder I’d been eyeing in one of my grandfather’s birding catalogs. I’d placed the catalog strategically on the kitchen table a couple of weeks ago, open to the page in question. There was no way my parents could have missed it.

I was planning to put it outside one of the windows in my room. I figured it would be almost like having pet birds.

A person couldn’t have enough bird feeders. Especially when that person was as crazy about birds as I was.

The house was still quiet when Miss Marple and I emerged from the bathroom.

“They’re probably in the kitchen already, waiting to surprise me,” I whispered to the dog as I got dressed and then tiptoed downstairs. Correction: I tiptoed; Miss Marple galumphed. She wasn’t exactly the daintiest of dogs.

Disappointed, I glanced out the window. The driveway was empty too. Was there a wrestling tournament today that my parents and sisters had taken my brothers to? I’d almost forgotten my own birthday; maybe I’d forgotten about one of Hatcher’s and Danny’s wrestling matches as well.

Just then I heard the door to the garage open, and a moment later my father walked in.

“Why are you dressed like that?” He eyed me, frowning.

“Um . . . ,” I replied, looking down at my clothes. I’d made an effort for once—I was always getting scolded for not dressing up enough for church—and picked out what I thought was a pretty nice outfit.

“Go get changed, Truly!” My father sounded impatient. “We haven’t got all day.”

I looked at him, bewildered. “Aren’t we going to church?”

“Not this morning. We’re needed at Freeman Farm.”

My mother came into the kitchen behind him. “They have a syrup emergency,” she said, like that explained everything. “We just dropped your brothers and Lauren off to help, and Pippa is waiting in the car. You were in the shower when we left—didn’t you get our note?”

I turned around and looked to where she was pointing. Sure enough, right there in plain sight leaning against the salt and pepper shakers was a tented piece of paper with TRULY written on it.

“Don’t worry, honey, we haven’t forgotten you,” my mother promised. “We’ll have your special birthday breakfast tomorrow, after Mackenzie gets here.”

Tears sprang to my eyes. We weren’t going to celebrate my birthday until tomorrow?

Seeing the expression on my face, my mother bit her lip. “It’s the right thing to do, Truly. The Freemans are swamped, what with the Maple Madness rush.”

Maple Madness! I was sick of hearing about stupid Maple Madness. Our whole town had gone maple syrup crazy. The minute the weather conditions cooperated, all the farms and small backyard operations around town had begun scrambling to harvest the sap from the trees and turn it into liquid gold. And now, with April just around the corner, all anyone could talk about was Maple Madness.

Every autumn New Hampshire flung its doors open wide for the leaf peepers—tourists obsessed with fall foliage—and every spring they did the same for the maple maniacs. All over the state there were special events and tours and other celebrations during “sugaring off” season, including Pumpkin Falls’ own week-long Maple Madness.

And this year my birthday had the misfortune of falling right in the middle of the kickoff weekend.

“But Mom, it’s my birthday,” I said, trying not to whine. An extra-special one, I wanted to add. The one I’d been waiting for forever, because today I was finally a teenager, which was practically a grown-up.

“Truly.” My father’s voice had the warning note in it that meant business.

My mother stretched up on her tiptoes and gave me a quick kiss on the cheek. At six feet tall, I towered over her. In fact, I pretty much towered over everybody in my family, except for my aunt.

“Thanks, sweetheart,” my mother said. “And don’t worry—we’ll make it up to you tomorrow.”

Fat lot of good that does me today, I thought bitterly, and went upstairs to change my clothes. 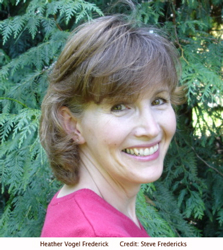 Heather Vogel Frederick is the award-winning author of the Mother-Daughter Book Club series, the Pumpkin Falls Mystery series, the Patience Goodspeed books, the Spy Mice series, and Once Upon a Toad. An avid fan of small towns like Pumpkin Falls, Heather and her husband live in New England, close to where Heather grew up. You can learn more about the author and her books at HeatherVogelFrederick.com.

"Historical subtext about the Underground Railroad and the New Hampshire setting add special dimensions to this rural mystery. Truly's fans cheer the return of the likable sleuth in this family-oriented mystery in which past and present collide."

"Fans of cozy mysteries, get your blankets and  hot cocoa ready!"

More books in this series: A Pumpkin Falls Mystery