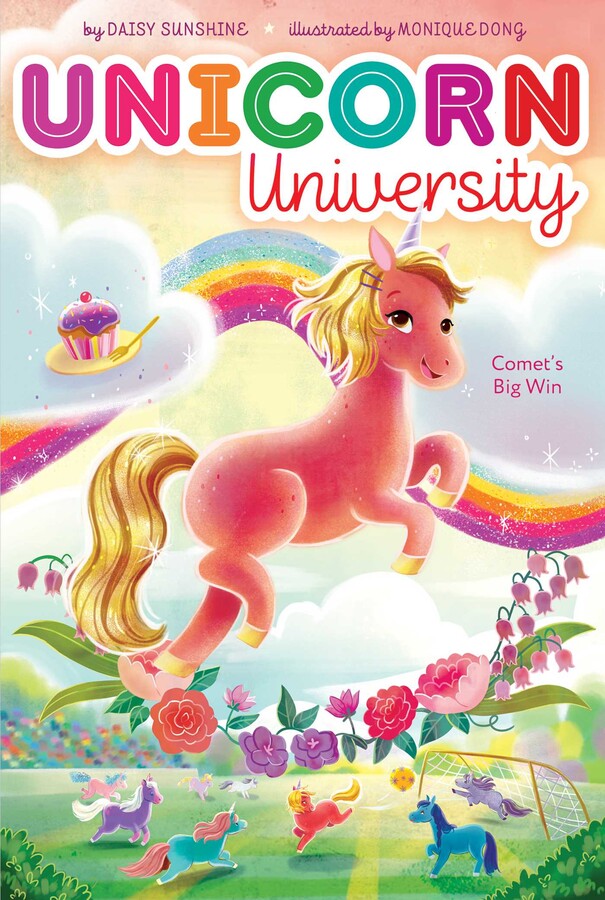 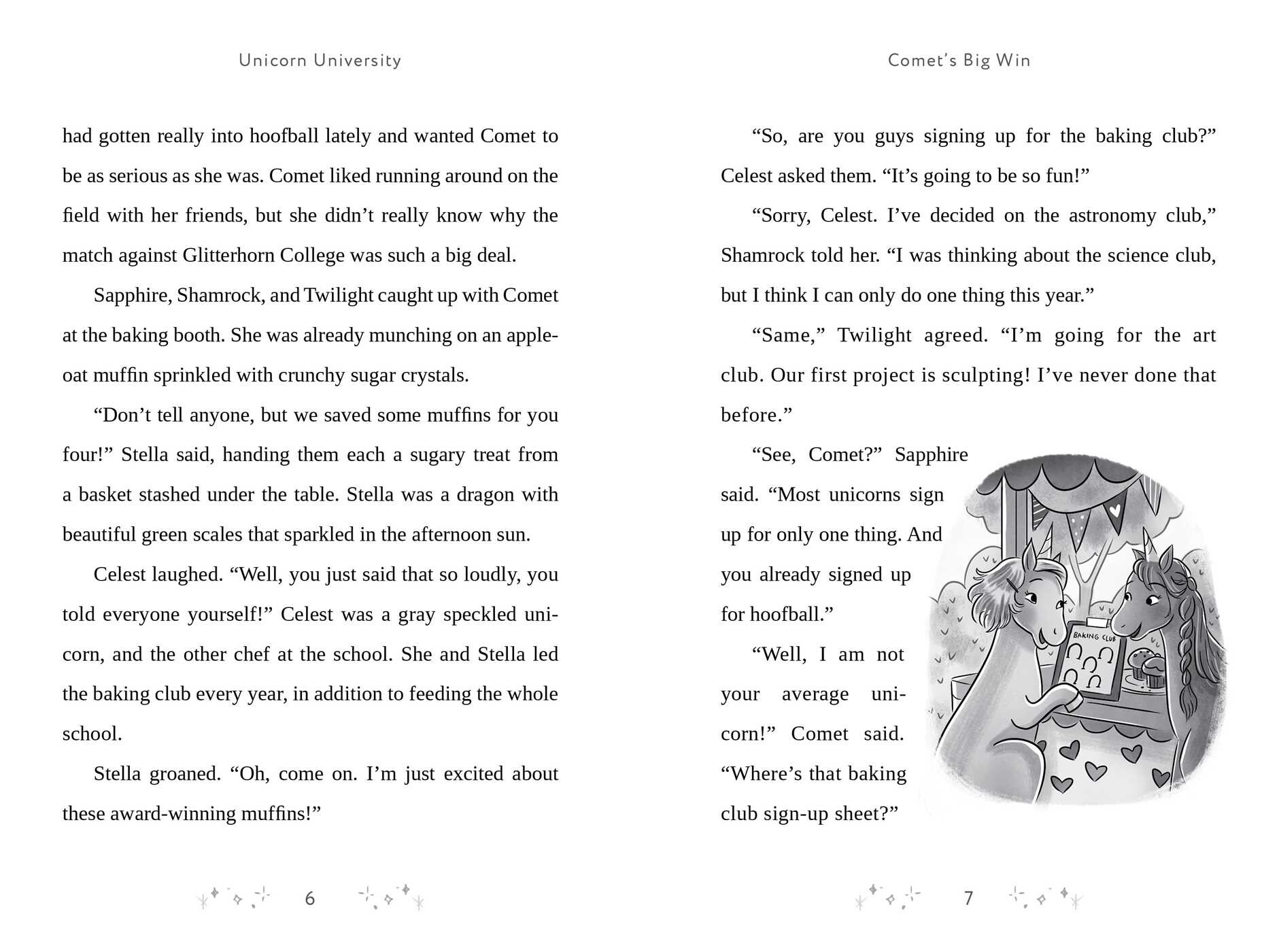 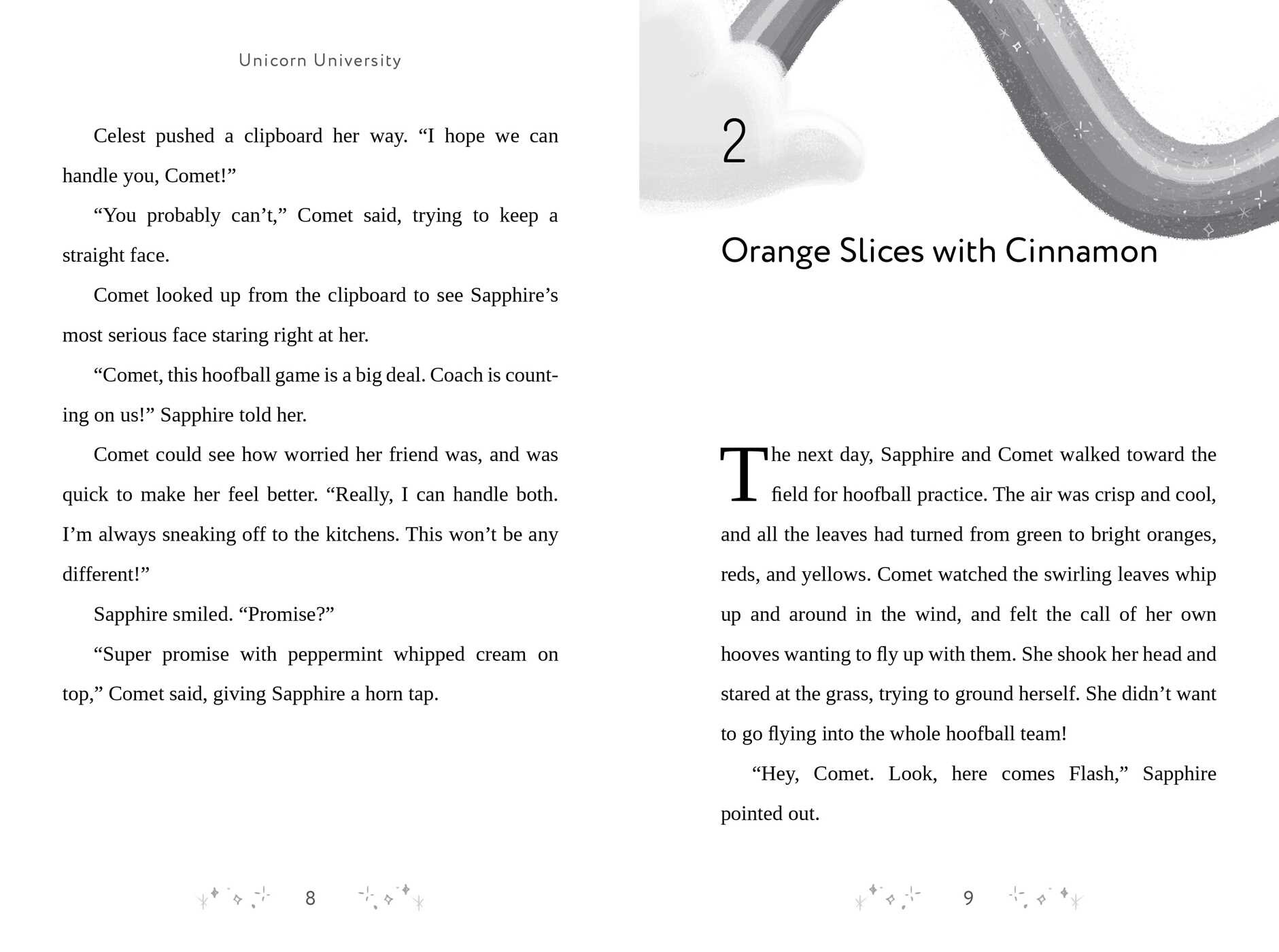 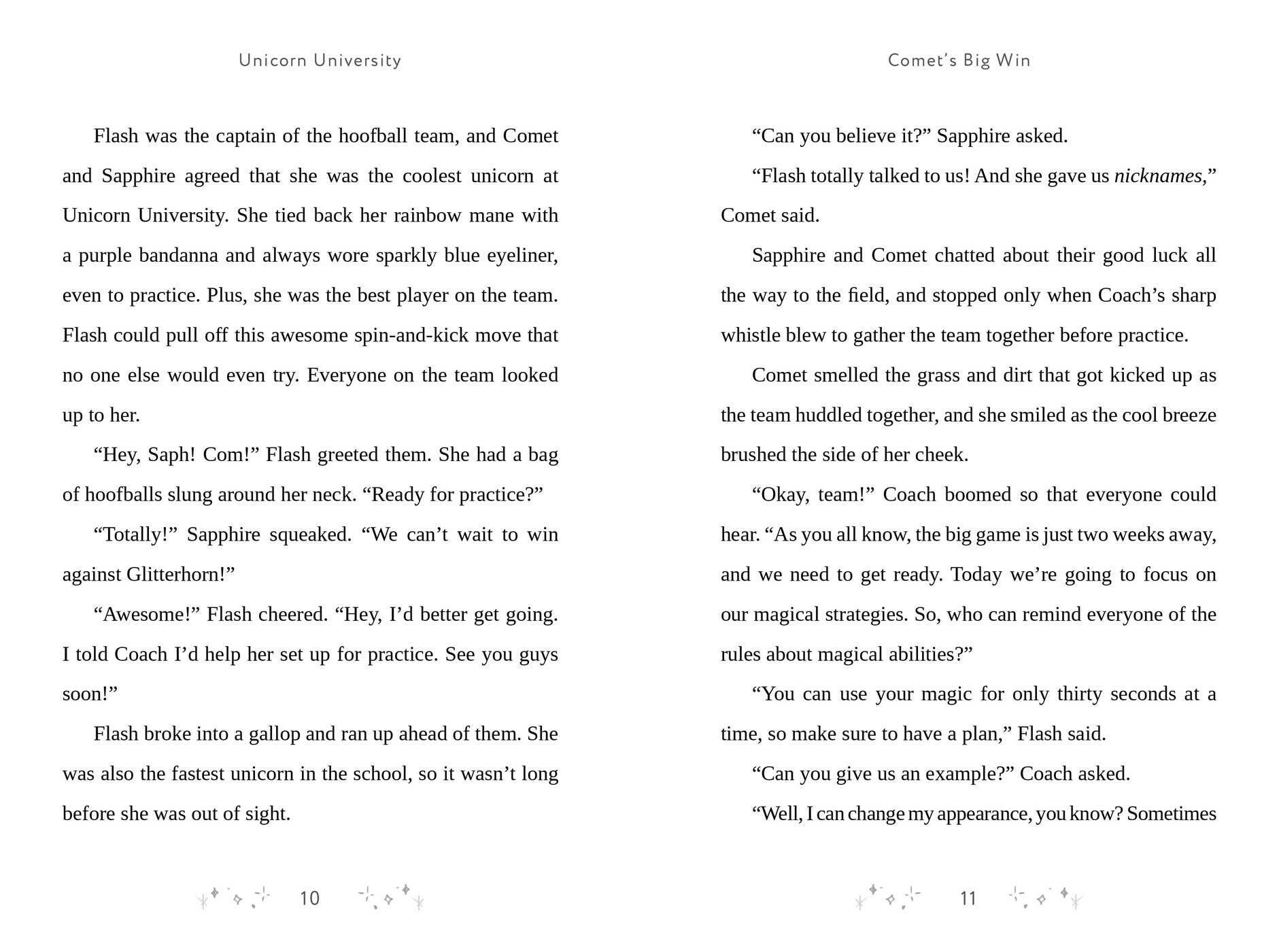 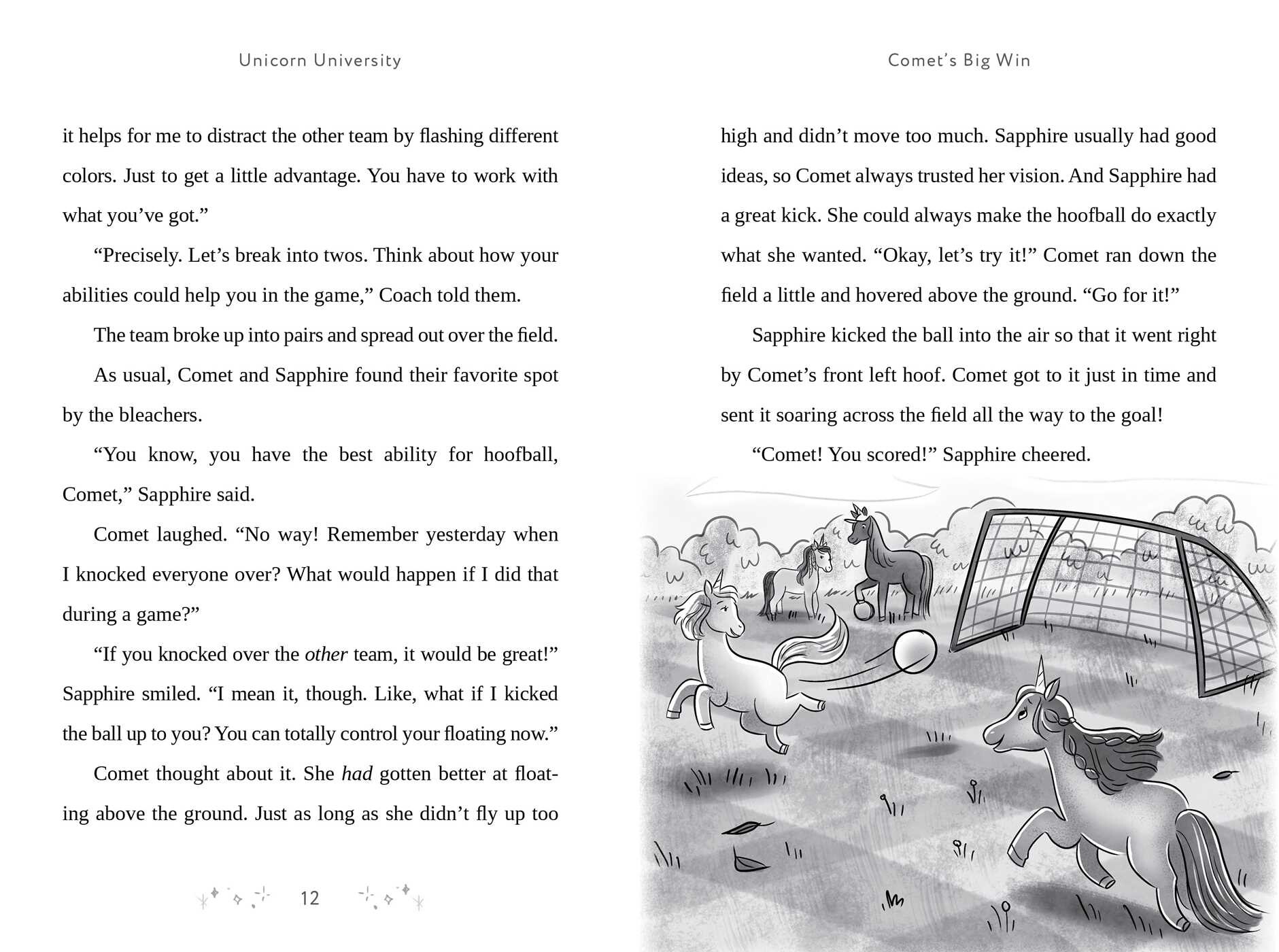 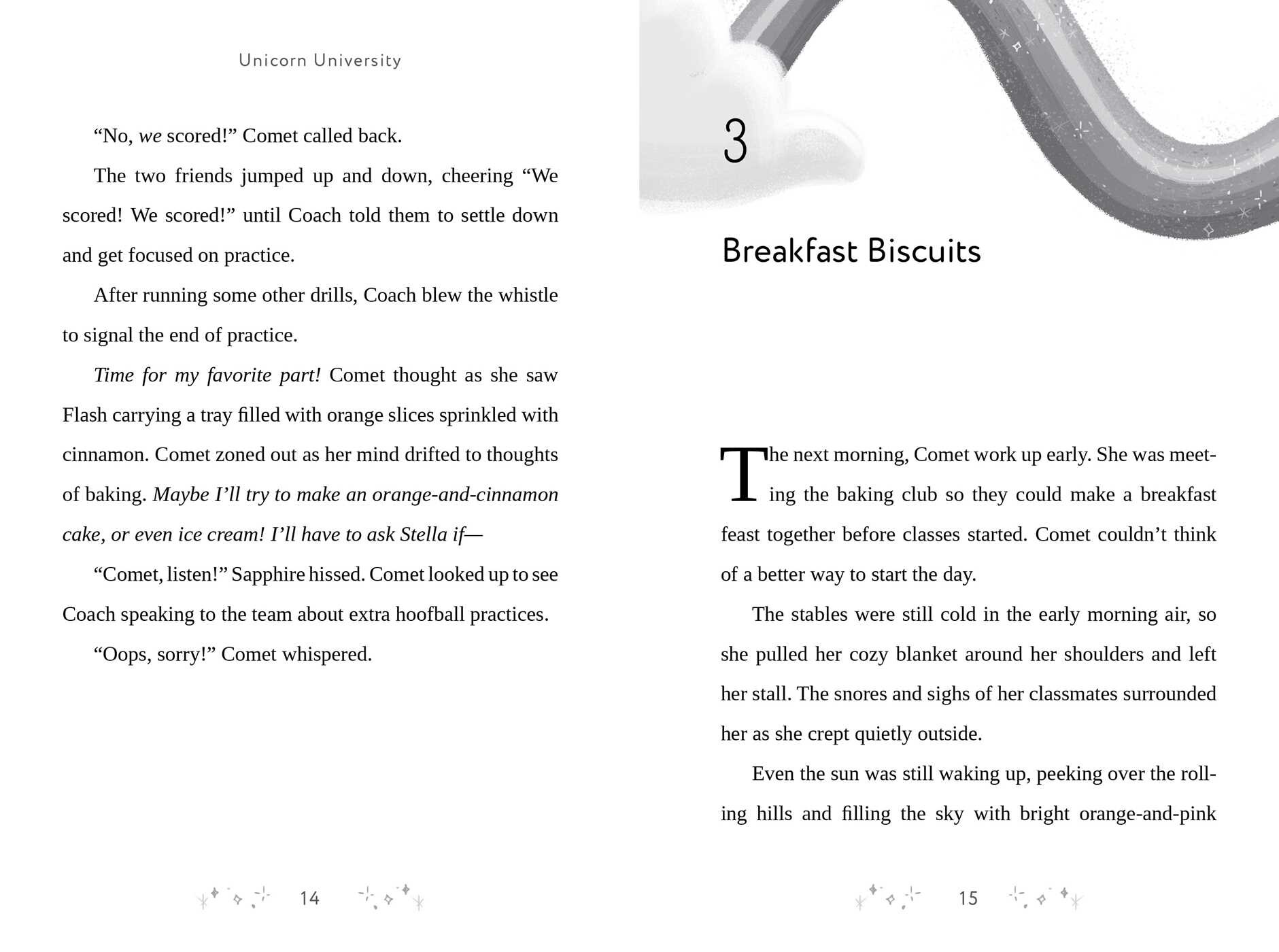 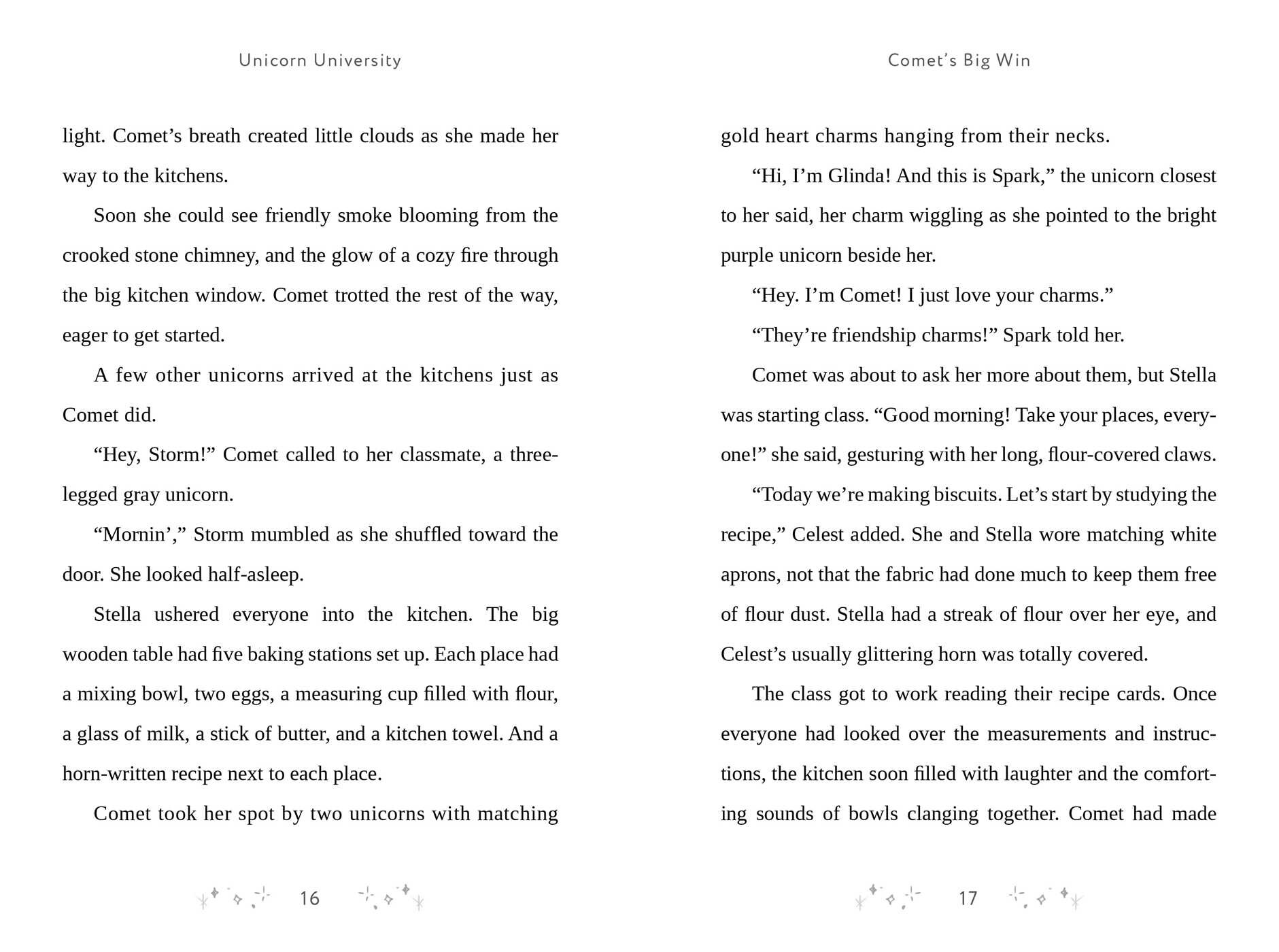 Comet has a tough choice to make in the fourth book of this sparkly chapter book series that follows the trials and triumphs of young foals attending Unicorn University—perfect for those who love magic, happiness, and My Little Pony!

It’s another day at Unicorn University, and Comet is in a pickle. She doesn’t want to let her team down at the big Hoofball game against their fiercest rivals, but she entered the baking competition that falls on the same day—and she’s dying to see if her kitchen creation can win first prize. Can Comet bake her cake and eat it, too? Or will the whole day be one big missed shot?

Today was the school’s club fair, and there were tents with waving flags, horns trumpeting joyful music, and cheerful chatter all around her. It looked like a carnival she’d gone to when she was little, but instead of circus performers there were students everywhere. The dance club was performing onstage. The science club was bubbling up purple slime at a booth. There was even a juggling club balancing plates on their horns. All the activity made Comet smile. Growing up in a large family, Comet had always felt more at home in big, noisy crowds. She felt like she could wander around all day.

Comet soon spotted her three very best friends huddled together over by the gardening club’s table. Plants of every color and shape were piled so high, you could hardly see the unicorns in the booth behind them. Shamrock, a mint-colored unicorn with huge, black-rimmed glasses, seemed to be studying a large piece of paper. Twilight, who stood out with her jet-black coat and brightly painted hooves, was looking all around her, clearly distracted by everything that was going on. And Sapphire, a blue unicorn with long braids, was pointing to something on Shamrock’s paper with her horn. Comet was sure they were deciding which booth to check out next.

I have to tell them about the baking booth! she remembered. The school’s chefs, Stella and Celest, had told her a secret: the first students to get to the baking club booth would get a special treat! And no one made treats like Stella and Celest. The fair was already in full swing, and Comet knew that she and her friends had to get to the baking booth fast. She started running over, but—oh no!—she got a little too excited and her special flying power kicked in. Soon Comet was a rose-colored blur speeding right toward her friends, and with a crash, she knocked them over like bowling pins.

Comet untangled herself from the group while shouting funny apologies. A couple of other unicorns grumbled about the mess, but most unicorns were used to Comet’s dramatic entrances. She was still adjusting to her magical ability and was always flying into things or accidently floating away.

Comet and her friends got to their hooves, laughing as the dust settled.

“We were actually just looking for you, Comet,” said Twilight.

“Yeah, we were trying to figure out which booth we should check out,” Shamrock told her. His glasses had gone crooked in the fall, so he shook his head to straighten them.

“But don’t worry, Comet. I already told them you couldn’t join any clubs during hoofball season,” Sapphire added. She said it matter-of-factly, as if she and Comet had already discussed it.

Comet felt like she had fallen down all over again. No clubs?! “What do you mean?” she asked.

“Comet!” Sapphire blew out her lips, giving her friend a look. “Coach told us last week! Everyone on the hoofball team has to be ready for the big game against Glitterhorn College. Which of course means focusing on practice. And nothing else!”

Comet laughed, tossing her bangs out of her eyes. “Oh, come on, Sapphire! We are never going to play in that game. We’ll just be there in case, like, all the other players get hurt. We’re only first years!”

Sapphire shook her head and looked determined. “No way! Coach said we could play if we worked really hard.”

Comet just shrugged. They didn’t have time to get into this when they really needed to score one of Stella and Celest’s surprise treats. “We’re wasting time, guys! We have to make it to the baking booth!” Comet broke into a brisk trot before there could be anymore hoofball talk. Sapphire had gotten really into hoofball lately and wanted Comet to be as serious as she was. Comet liked running around on the field with her friends, but she didn’t really know why the match against Glitterhorn College was such a big deal.

Sapphire, Shamrock, and Twilight caught up with Comet at the baking booth. She was already munching on an apple-oat muffin sprinkled with crunchy sugar crystals.

“Don’t tell anyone, but we saved some muffins for you four!” Stella said, handing them each a sugary treat from a basket stashed under the table. Stella was a dragon with beautiful green scales that sparkled in the afternoon sun.

Celest laughed. “Well, you just said that so loudly, you told everyone yourself!” Celest was a gray speckled unicorn, and the other chef at the school. She and Stella led the baking club every year, in addition to feeding the whole school.

“So, are you guys signing up for the baking club?” Celest asked them. “It’s going to be so fun!”

“Sorry, Celest. I’ve decided on the astronomy club,” Shamrock told her. “I was thinking about the science club, but I think I can only do one thing this year.”

“Same,” Twilight agreed. “I’m going for the art club. Our first project is sculpting! I’ve never done that before.”

“See, Comet?” Sapphire said. “Most unicorns sign up for only one thing. And you already signed up for hoofball.”

“Well, I am not your average unicorn!” Comet said. “Where’s that baking club sign-up sheet?”

Celest pushed a clipboard her way. “I hope we can handle you, Comet!”

Comet looked up from the clipboard to see Sapphire’s most serious face staring right at her.

“Comet, this hoofball game is a big deal. Coach is counting on us!” Sapphire told her.

Comet could see how worried her friend was, and was quick to make her feel better. “Really, I can handle both. I’m always sneaking off to the kitchens. This won’t be any different!”

Daisy Sunshine writes books and dreams of unicorns by the sea in Santa Cruz, California.