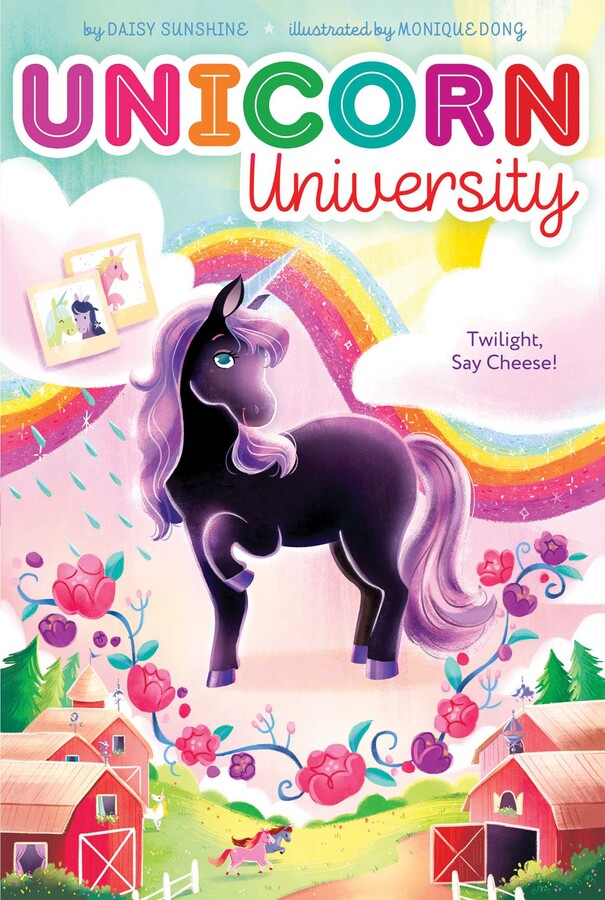 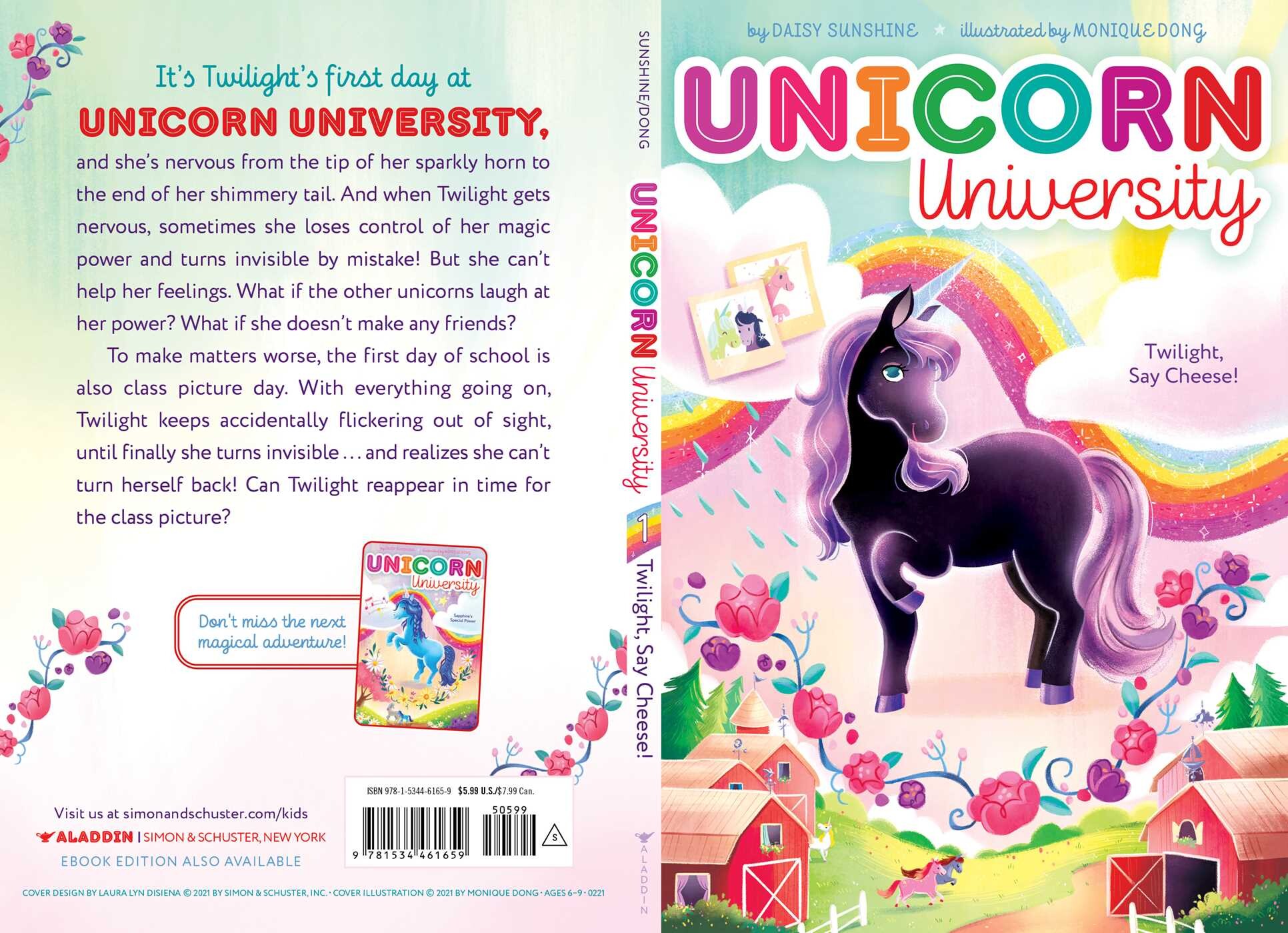 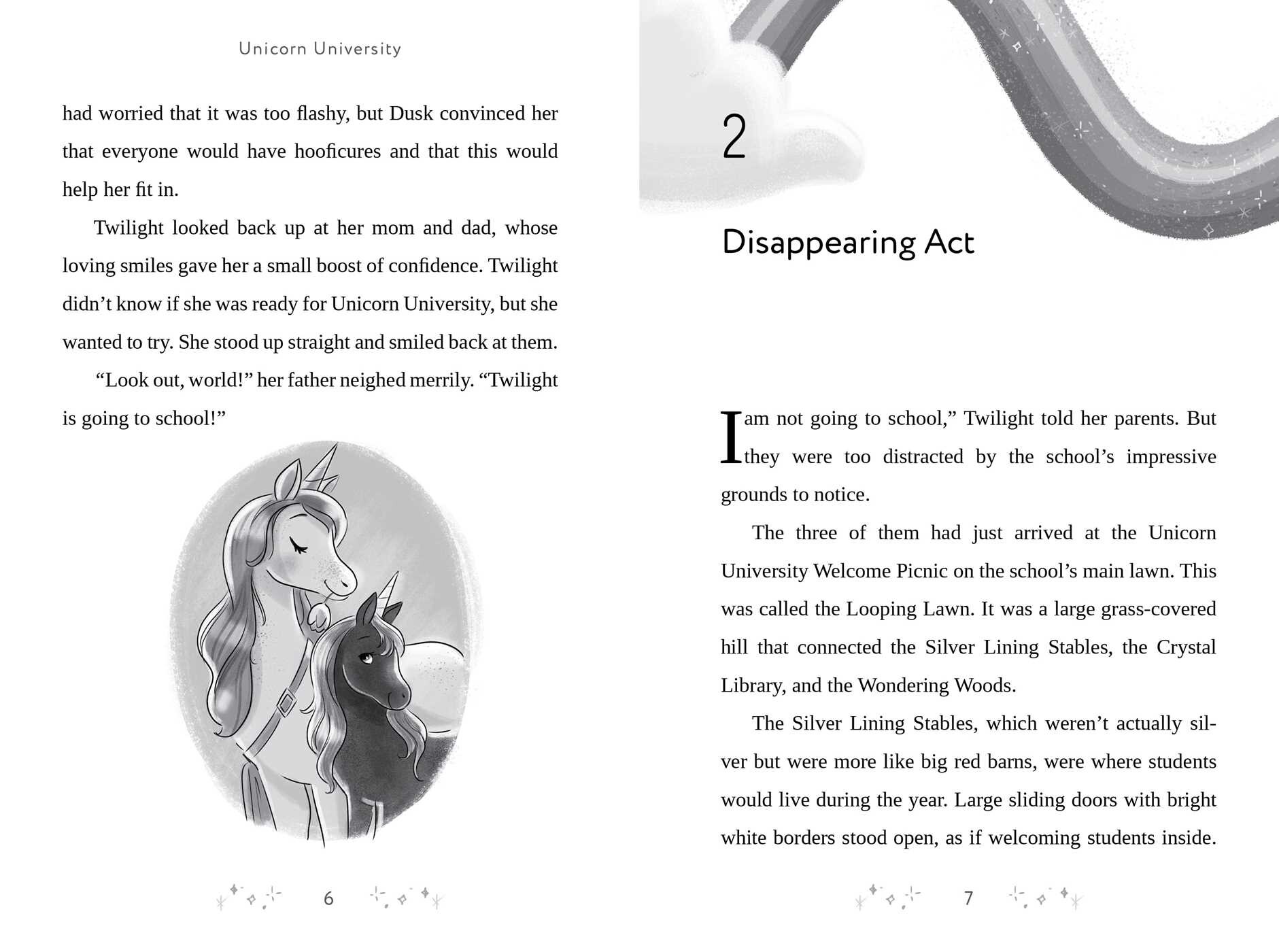 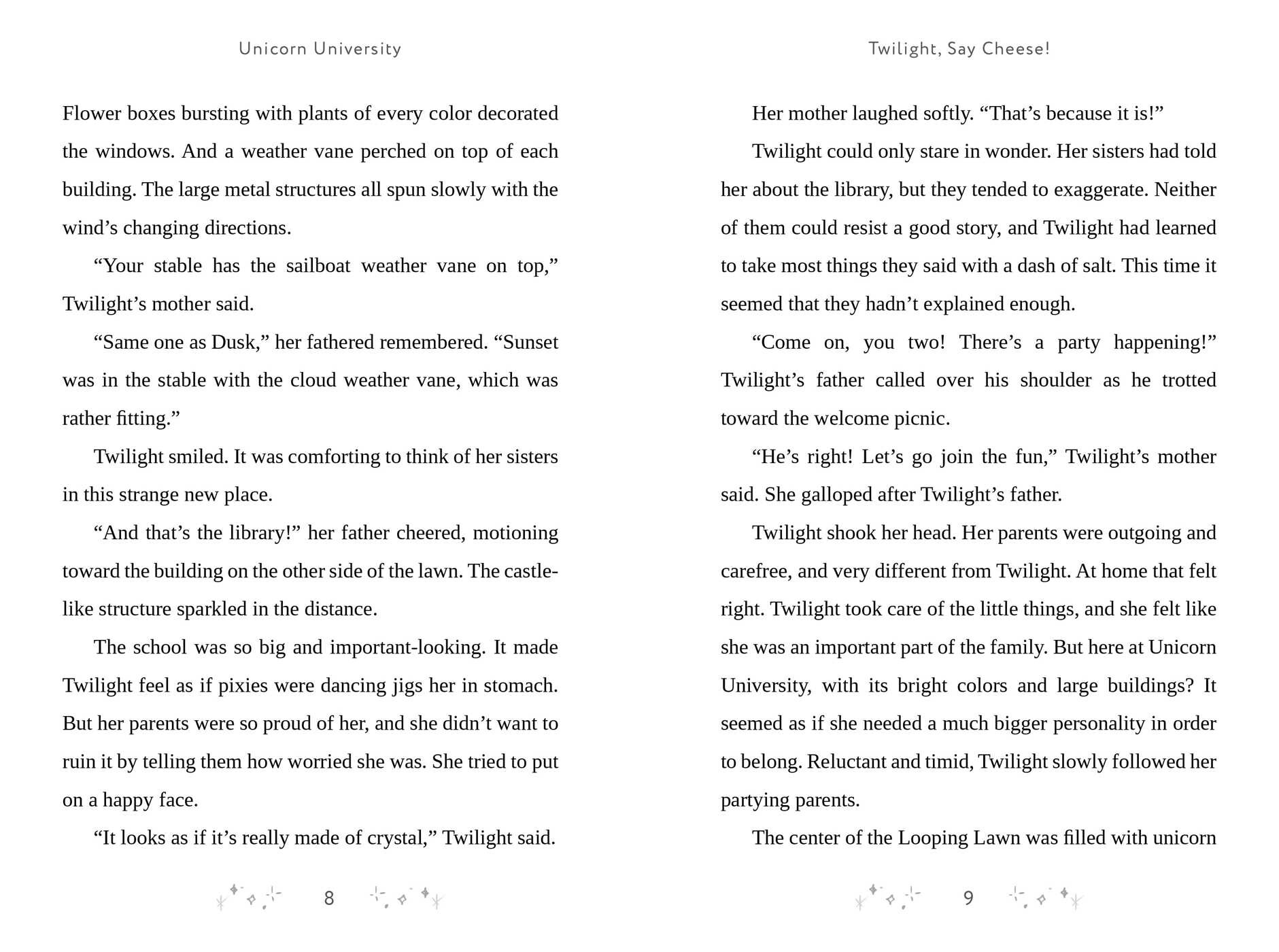 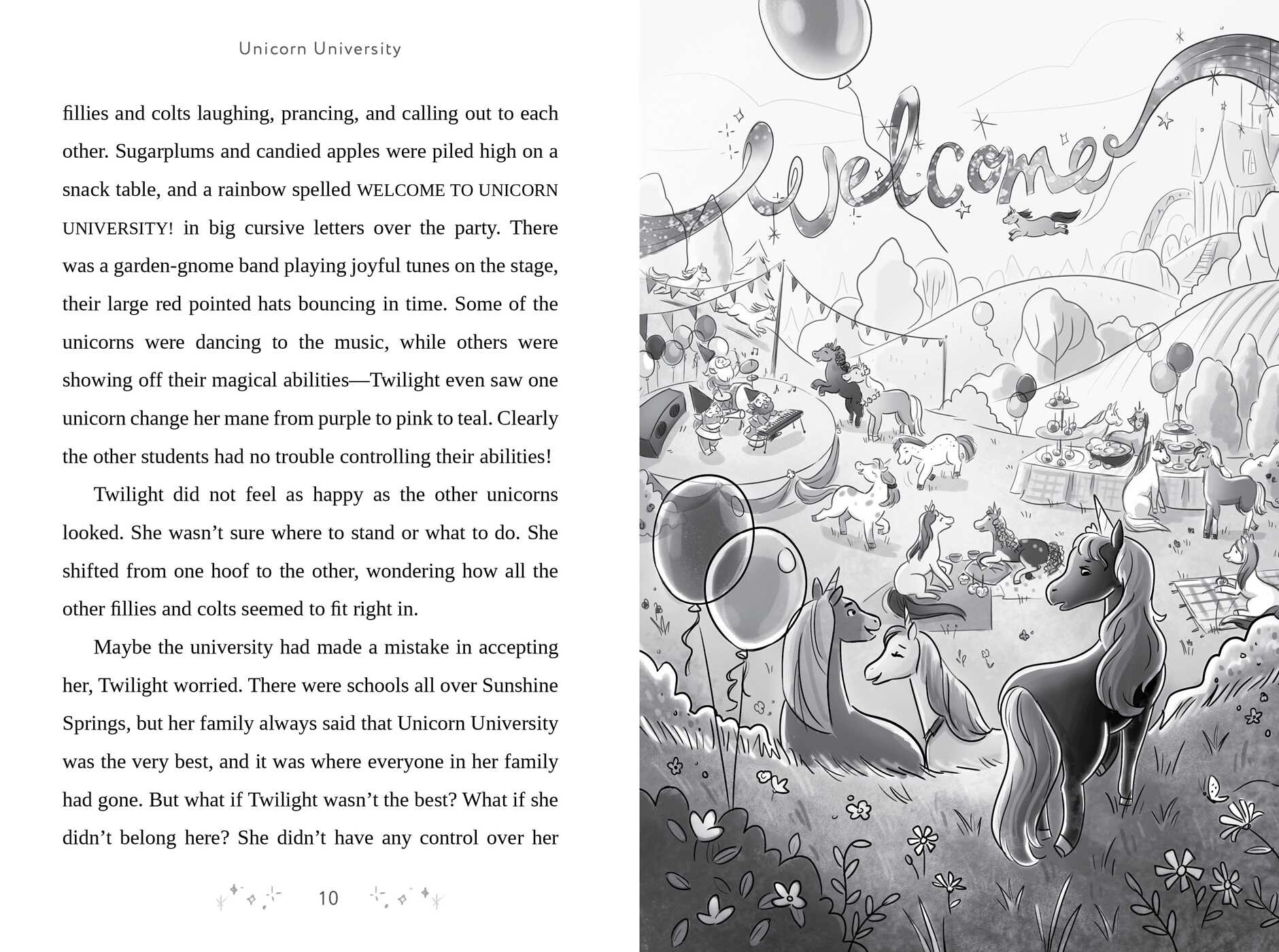 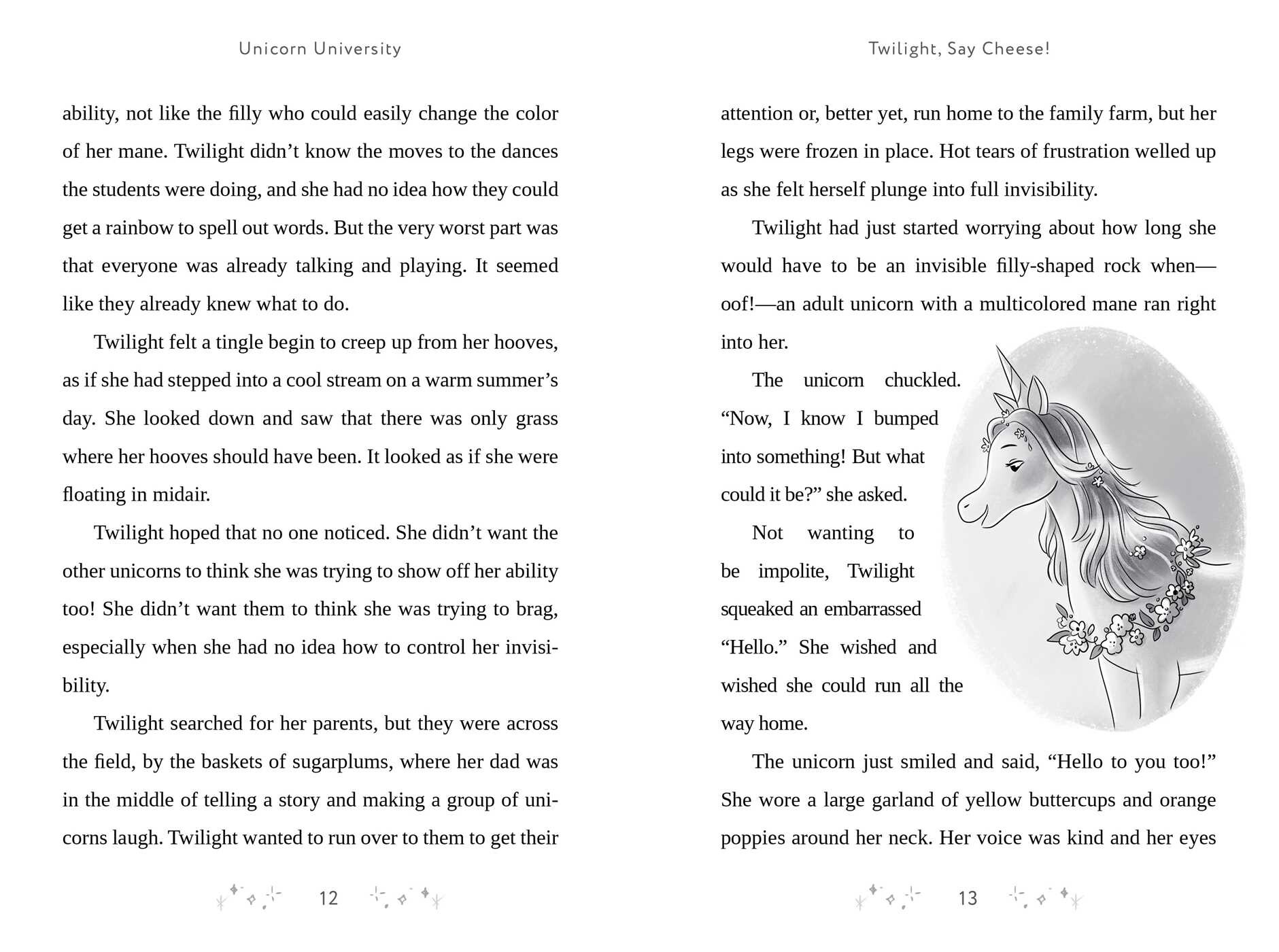 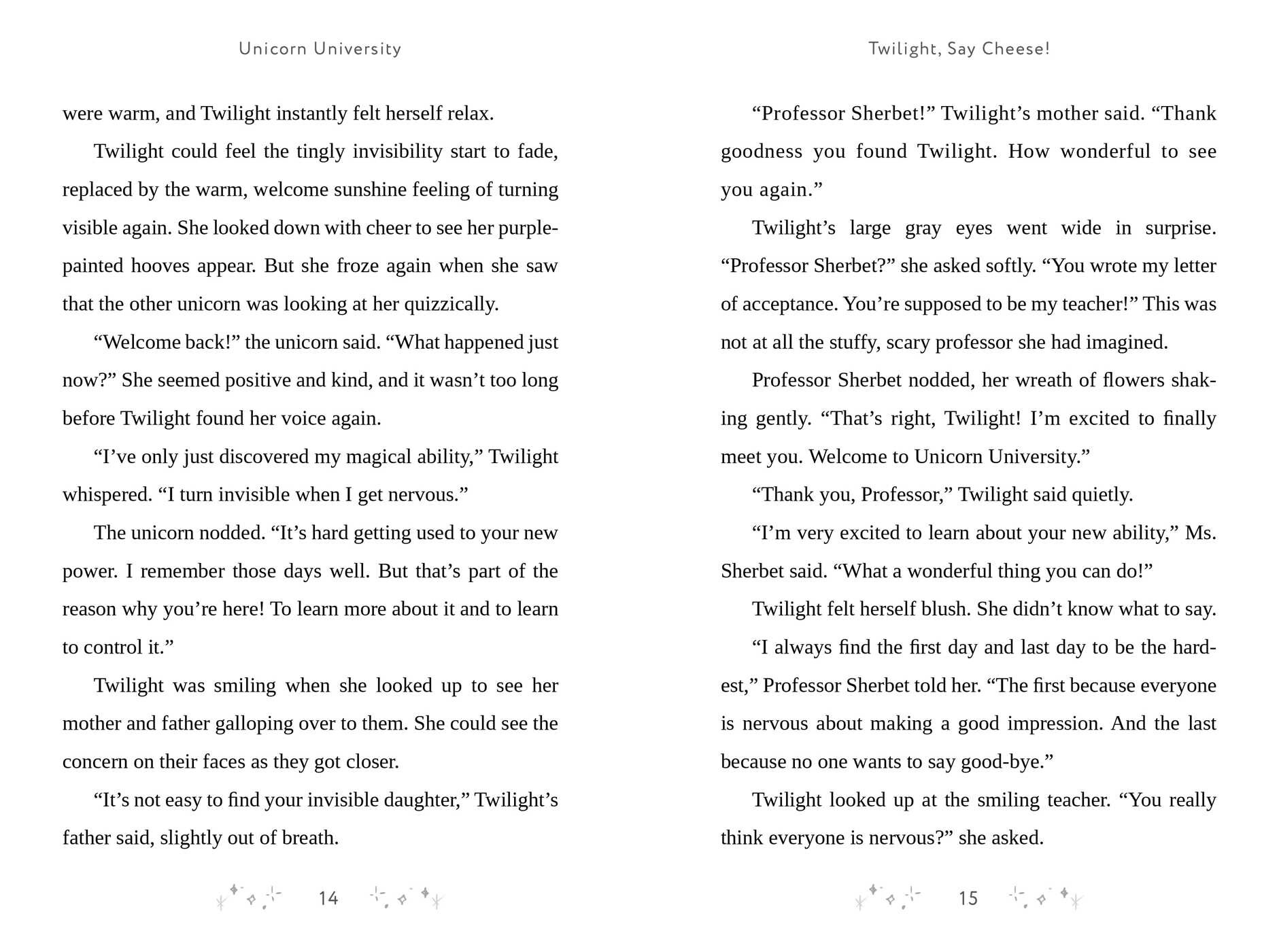 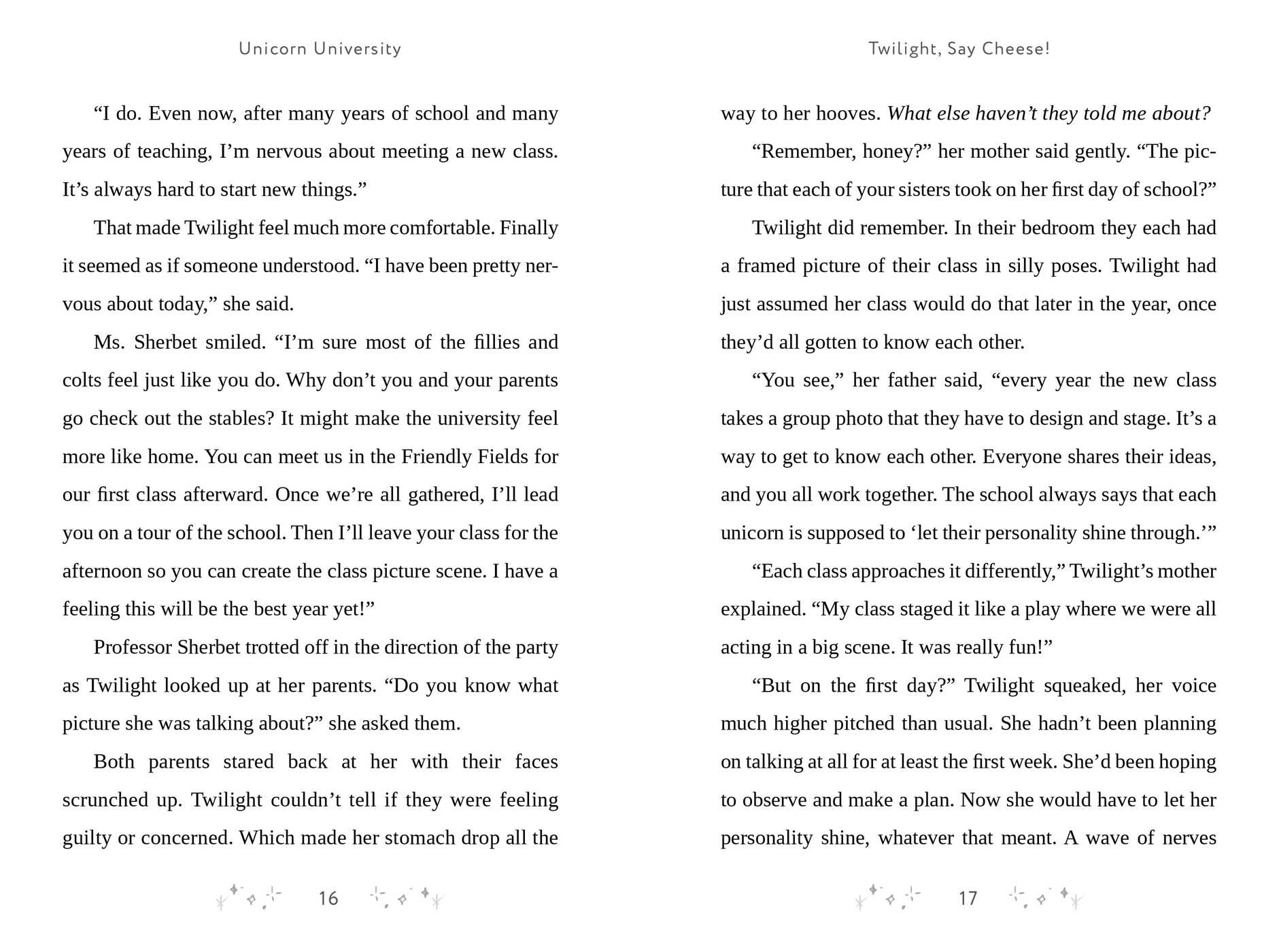 Twilight struggles with first day of school jitters in the first book of this sparkly new chapter book series that follows the trials and triumphs of young foals attending Unicorn University—perfect for those who love magic, happiness, and My Little Pony!

It’s Twilight’s first day at Unicorn University, and she’s nervous from the tip of her sparkly horn to the end of her shimmery tail. And when Twilight gets nervous, sometimes she loses control of her magic power, and turns invisible by mistake! But she can’t help her feelings. What if the other unicorns laugh at her power? What if she doesn’t make any friends?

To make matters worse, the first day of school is also class picture day. With everything going on, Twilight keeps accidentally flickering out of sight, until finally she turns invisible…and realizes she can’t turn herself back! Can Twilight reappear in time for the class picture?

1 Ruby-Red Barns
Twilight was having an almost perfect day. The sun was shining, and the yellow buttercups of Sunshine Springs were in full bloom. Her mother had even surprised her with her very favorite breakfast, apple oat muffins with cinnamon sugar. It was a long trip from their farm to Unicorn University, but Twilight’s father made it a great adventure and told funny stories and ideas the whole way.

The day was only almost perfect because Twilight could not stop thinking about how nervous she was to start school. She worried that she wouldn’t know the right things to say or do. Outside her family, she had never spent much time with other unicorns. Her sister Sunset was outgoing, and her sister Dusk was funny. But Twilight had always been shy. How was she going to make friends?

Twilight looked up to where her mother’s golden horn was pointing. She could see a cluster of big ruby-red barns standing atop the grassy hill in the distance.

Twilight felt her stomach drop. Her nervousness might have just been in the back of her mind on the way there, but now the situation felt very, very real. She felt positively sick. Twilight thought about telling her parents that she was actually too sick to go to school, but she had decided to make her family proud, swallow her fears, and go. Even if it did make her stomach flip and flop.

“Sugarplum for your thoughts?” Twilight’s father asked. He nudged her cheek with his long, gray nose.

Twilight’s father neighed knowingly. “Of course you are, honey. Everyone is, on their first day, and your sisters were too. But Sunset and Dusk did wonderfully at Unicorn U. You are sure to follow in their hoofprints.”

Twilight nodded, though his words didn’t actually make her feel any better. When Sunset had been at Unicorn U, she’d been the star of the school hoofball team. Her magical ability let her fly with just a run and a jump, and now she worked with dragons in Cloud Kingdom. Dusk had had the best grades in school and could make flowers grow just by breathing on them. Since graduating, she’d been developing a brand-new apple tree that could grow in any of the five kingdoms.

It was a lot to live up to.

Unlike her sisters, Twilight didn’t like to stand out from the crowd. She preferred quiet activities, like reading and painting. Painting was the perfect way to record all her wild daydreams, and books had all the company she could need.

When Twilight had been little, she’d loved reading about magical creatures, especially lions and mice. Lions reminded her of her sisters—always stomping in after practice or conducting experiments. Mice reminded her of herself—quiet and observant. Twilight never minded being the quiet one. She liked watching the goings-on of her house from her favorite spot by the window. It just felt like her role in the family.

That was, until her magical ability had appeared.

She’d discovered it when Dusk had come home one afternoon and jumped from behind a haystack while Twilight had been out in the field, painting and lost in thought. Twilight didn’t even realize she had become invisible until Dusk started panicking and yelling for her. Twilight quickly appeared again, just in time to comfort her sister.

Ever since that day, Twilight’s invisibility had come and gone unexpectedly. She usually became invisible when she was embarrassed or nervous, but she would always reappear again once her family noticed that she had disappeared, which usually meant she had to whinny or stomp to get their attention. Her parents called her invisibility a magical gift, but Twilight thought of it as a curse. Having to make a spectacle to get a unicorn’s attention? That was decidedly too lionlike.

What if I fade out in front of everyone at school? Twilight worried, shuddering at the thought. The last thing she wanted was to be forced to make a scene in front of her classmates.

Twilight’s mother trotted over, her well-worn leather satchel swinging gently from her neck. She carried a large pink tulip in her mouth. Carefully she tucked the flower behind Twilight’s ear. “You just be yourself, honey,” she said.

Twilight let out a soft thank-you neigh, and this time she did feel a little better. She looked down at the ground, and smiled at how her bright purple hooves stood out against her jet-black coat. Dusk had given her a hooficure the night before, to celebrate her first day of school. At first Twilight had worried that it was too flashy, but Dusk convinced her that everyone would have hooficures and that this would help her fit in.

Twilight looked back up at her mom and dad, whose loving smiles gave her a small boost of confidence. Twilight didn’t know if she was ready for Unicorn University, but she wanted to try. She stood up straight and smiled back at them.

“Look out, world!” her father neighed merrily. “Twilight is going to school!”

Daisy Sunshine writes books and dreams of unicorns by the sea in Santa Cruz, California.