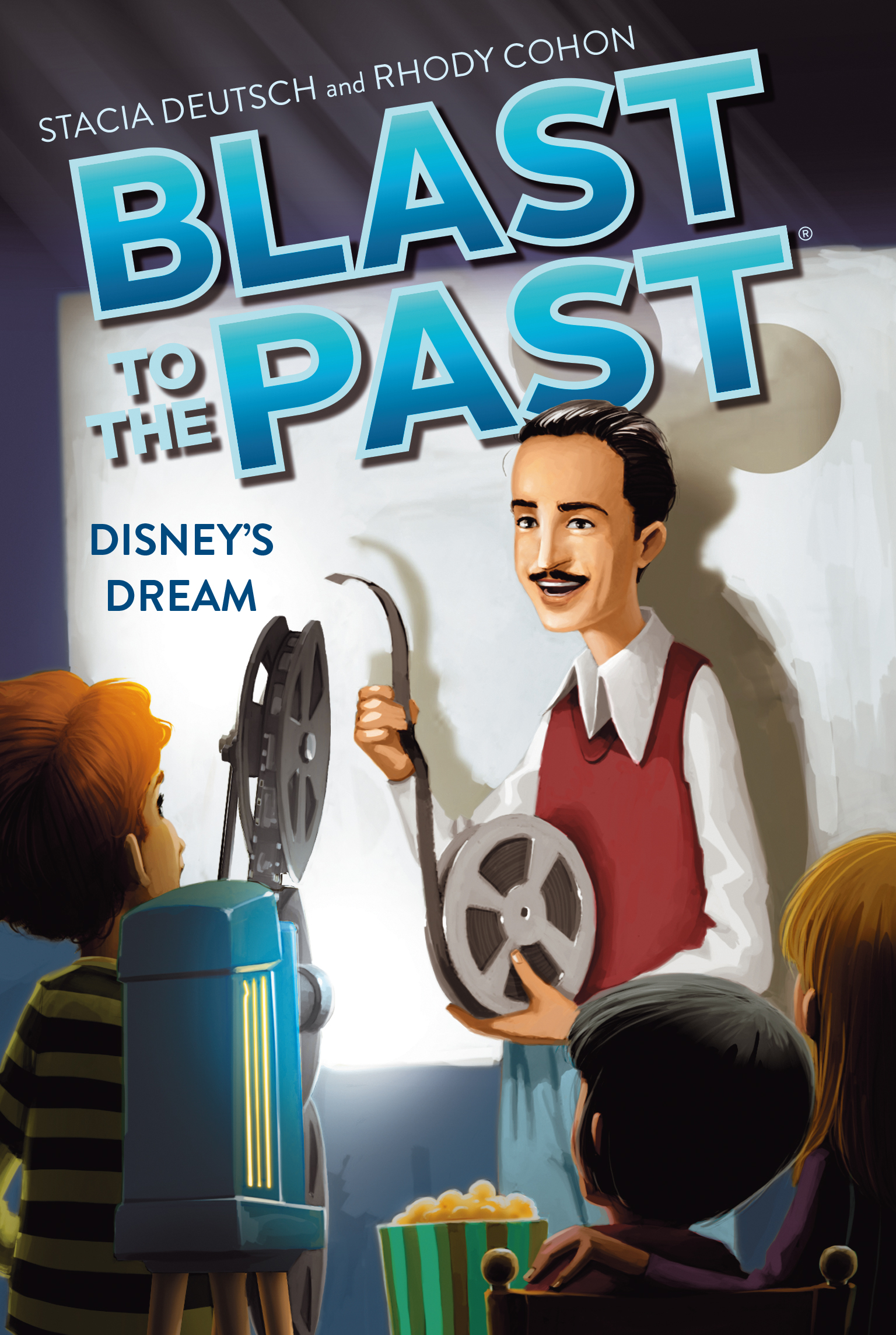 The kids in Mr. Caruthers’s class don’t want a world without cartoons. Can they persuade Walt Disney to pursue his passion? Book two in an action-packed time-travel series.

“What if Walt Disney quit and never made Steamboat Willie?” That’s the question Mr. Caruthers poses to his third grade class on Monday morning. Abigail, Jacob, Zack, and Bo are excited to travel back in time and meet Walt Disney, and they’re determined to convince Mr. Disney not give up making the first animated movie with sound. After all, what would their world be like without modern cartoons? Not to mention no Mickey Mouse, no Disneyland, and no Disney Channel! But will the kids be able to help Mr. Disney follow his dream before time runs out?

Blast to the Past

Monday Morning
The car screeched to a stop in front of West Hudson Elementary School.

“Hurry up, Abigail,” my sister commanded. “You’re going to be late to meet your teacher.”

I checked the dashboard clock. I had plenty of time. CeCe just wanted to get rid of me.

I leaned over to tie my shoe. Not because it needed to be tied, but just to bug her.

I peeked in my backpack to make sure that the time-travel computer was hidden safely inside. I looked inside my homework folder. Then, I took out my coin purse and counted my money. I put the coin purse back and finally zipped up my backpack. After all that, I slowly opened the car door and stepped out onto the sidewalk.

The instant I closed the door, CeCe sped off, leaving a cloud of dust behind her.

I was brushing off my pants when my friend Bo came up beside me.

“Hey, Abigail!” Bo pointed at the car. We heard the tires squeal as CeCe left the parking lot. “What’s your sister’s rush?”

“CeCe got her driver’s license this year,” I answered. “Mom lets her drive the car because she works at a movie theater after school.” I slung my backpack over one shoulder.

“Oh, yeah. I see her there all the time. The Happy Times Movie Theater,” Bo said, tipping his own backpack onto its wheels. “I like that place. On Mondays, they charge nineteen-twenties prices.”

“Yeah. Well, Mom said since CeCe has the car today, she had to drop me off early this morning. There is nothing CeCe hates more than driving me places.”

“Does she always zoom off like that?” Bo asked. He was talking pretty loudly—for Bo. He used to be so shy and quiet that I could barely hear him. But ever since we’d time-traveled together, he’d gotten a little louder. Or else I’d developed supersonic hearing.

“Yep. She wants to get away from me as fast as she can.” I thought about all the other times she’d rushed me out of the car. “We don’t get along. In fact, she tattles on me all the time. She’s always trying to get me in trouble.” Sometimes I think Bo is really lucky to be an only child.

“I work extra hard to make her crazy. I tell on her too. We’re in a big war.” I smiled mischievously. “I can be really annoying when I want to be.”

“You definitely annoyed her today,” Bo said, and laughed a little laugh. Then he said, “Don’t you think it’s weird that Mr. C wants us to meet him in the gym before school? I mean, I’m never up this early.”

Mr. Caruthers is our third-grade social studies teacher. He’s so cool, we call him “Mr. C.”

“Yeah,” I agreed. “It’s weird. I thought I was in trouble when he called me at home yesterday. Then I found out he called the twins, too.”

We headed around the back of the school building.

“Mr. C told my mom we were going to have a special History Club meeting this morning,” Bo said with a wink.

We knew what “History Club” meant. It’s what we like to call our time-traveling adventures.

Of course, we’d only had one History Club meeting so far.

I patted the outside of my backpack, thinking about the time-travel computer inside.

Last Monday, Mr. C had given us the computer. When we put a special cartridge into its back, a glowing green hole opened up in the floor. We jumped in. And that’s how we traveled through time. Taking the cartridge out brought us home again.

When he first handed us the computer and cartridge, Mr. C explained that, for some reason, famous Americans from the past were giving up their dreams. They weren’t inventing, speaking out, or fighting for what was right. They were quitting!

A sticker on each cartridge showed us who we were going to visit. Our mission was to make sure that the person didn’t quit! The tricky part was that we only had two hours to get the job done.

Our first mission had been a total success. We visited Abraham Lincoln in 1862 and convinced him to issue the Emancipation Proclamation, which he did—on September 22, 1862.

I pulled my backpack closer and made a wish: “I hope this History Club meeting means we get to time-travel again today,” I whispered so softly, no one could hear me.

Then, in my normal voice, I asked Bo, “Where do you think the twins are?” Jacob and Zack were in our class and lived next door to me.

Someone had propped the gym door open. We let ourselves in.

Jacob and Zack were waiting for us by the basketball hoop. When I saw them, I started to giggle. Soon, I was laughing so hard that my eyes filled with tears.

Jacob and Zack were wearing red-and-purple-striped sweatpants with matching hooded jackets. I see Jacob and Zack every day at school and on weekends, too. The twins hadn’t dressed alike since kindergarten. They looked ridiculous.

Jacob gave me a mean look. “Stop it!” he demanded. “Grandma sent us new clothes.” He sighed a big sigh. It was the kind of sigh you make when you really have no choice.

“Mom said we had to wear them,” Zack added, tugging at the zipper on his jacket. It was jammed. “I think I’m going be stuck wearing this forever,” he moaned.

At that moment, Mr. Caruthers walked into the gym.

Mr. C was wearing a suit and a bow tie. His hair was neatly combed. His shirt was tucked into his pants. Even his glasses were sitting nicely on his nose.
Stacia Deutsch

Stacia Deutsch is the author of more than fifty children’s books, including the eight-book, award-winning chapter book series Blast to the Past. She has also written the tween novel Mean Ghouls as well as books for the Nancy Drew and the Clue Crew and The Boxcar Children series. Stacia has been on the New York Times bestseller list for the novelizations of the Cloudy with a Chance of Meatballs and The Smurfs movies. For new releases and school visit information, visit StaciaDeutsch.com.

Rhody Cohon does all the research and editing for the Blast to the Past series. She has a master’s degree in computer engineering. Rhody lives with her family in Tuscon, Arizona.

David Thorn Wenzel has been part of the fantasy art movement since the 1970s when Middle Earth: The World of Tolkien Illustrated was released. He has continued to work on fantasy projects in the children’s book, trade book, and graphic novel markets throughout his career.  Illustrations from his 1980s book, Kingdom of the Dwarfs as well as the cover art of The Hobbit, are in the permanent collection of the New Britain Museum of American Art. Wenzel began his career working for Marvel and DC comics, working on The Avengers and Savage Sword of Conan. Other notable titles include the graphic novel of The Hobbit and The Wizard’s Tale. Over the course of his career, he has also illustrated numerous children’s books including Rudolph the Red-Nosed Reindeer, The Book of Kringle: Legend of the North Pole, and The King of Little Things. David lives in Connecticut where his studio overlooks a picturesque landscape of green farm fields and a winding brook. His entire family is involved in the arts. His wife Janice is an artist and teacher, and their two sons, Brendan (They All Saw A Cat, Hello Hello, A Stone Sat Still) and Christopher, are both visual artists. Greg Wenzel, David’s brother, is an author and illustrator (Giant Dinosaurs of the Jurassic).