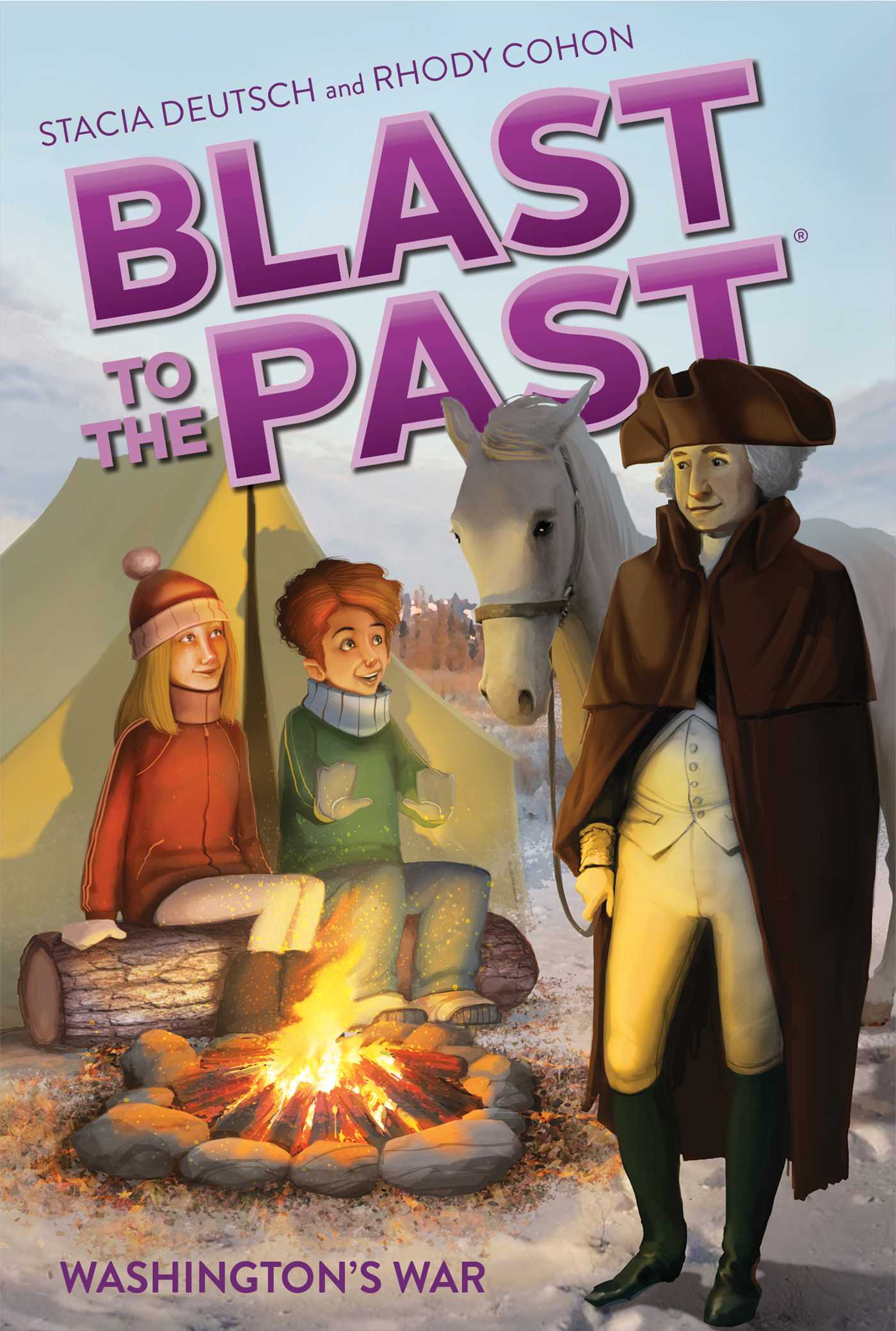 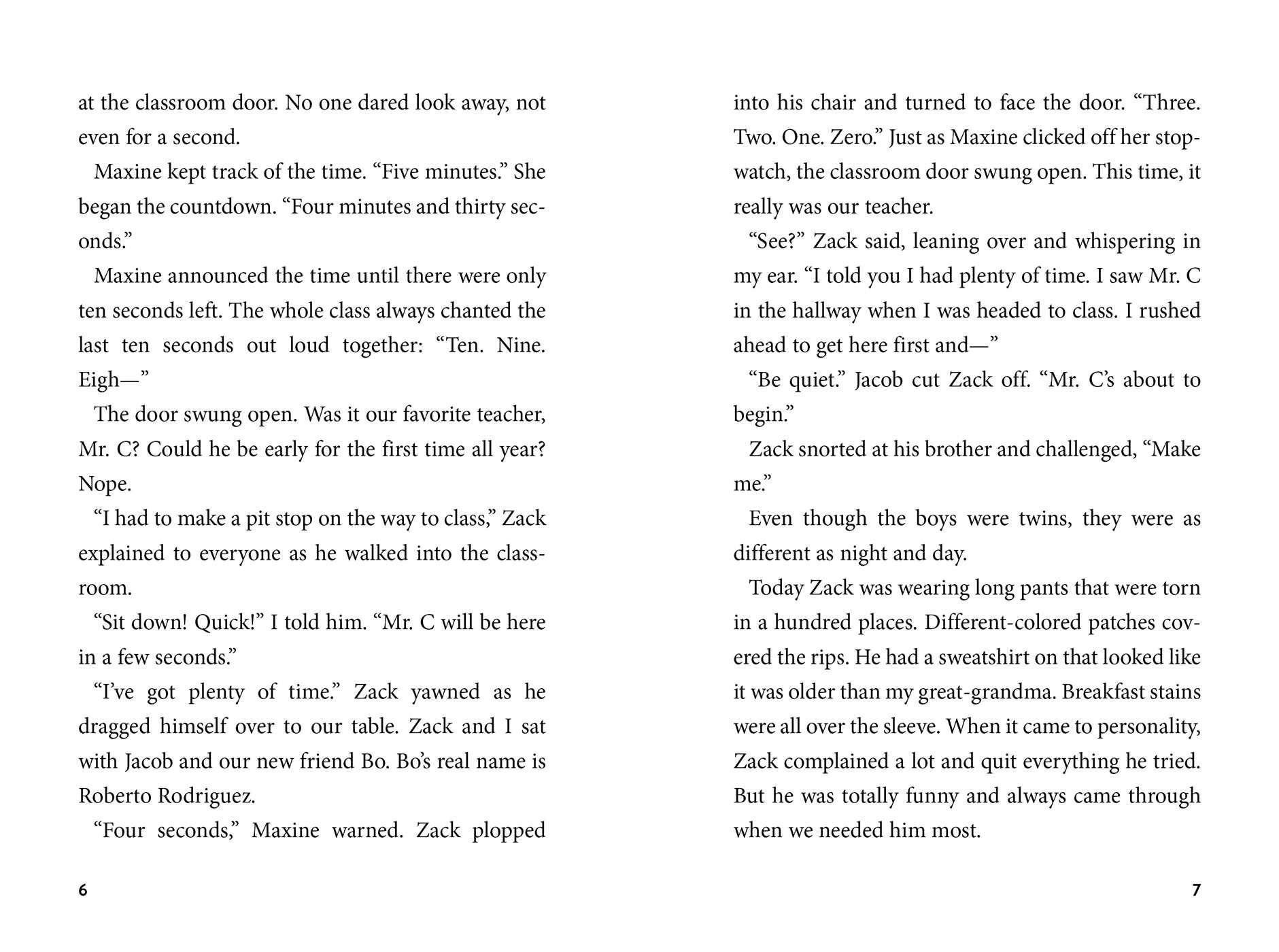 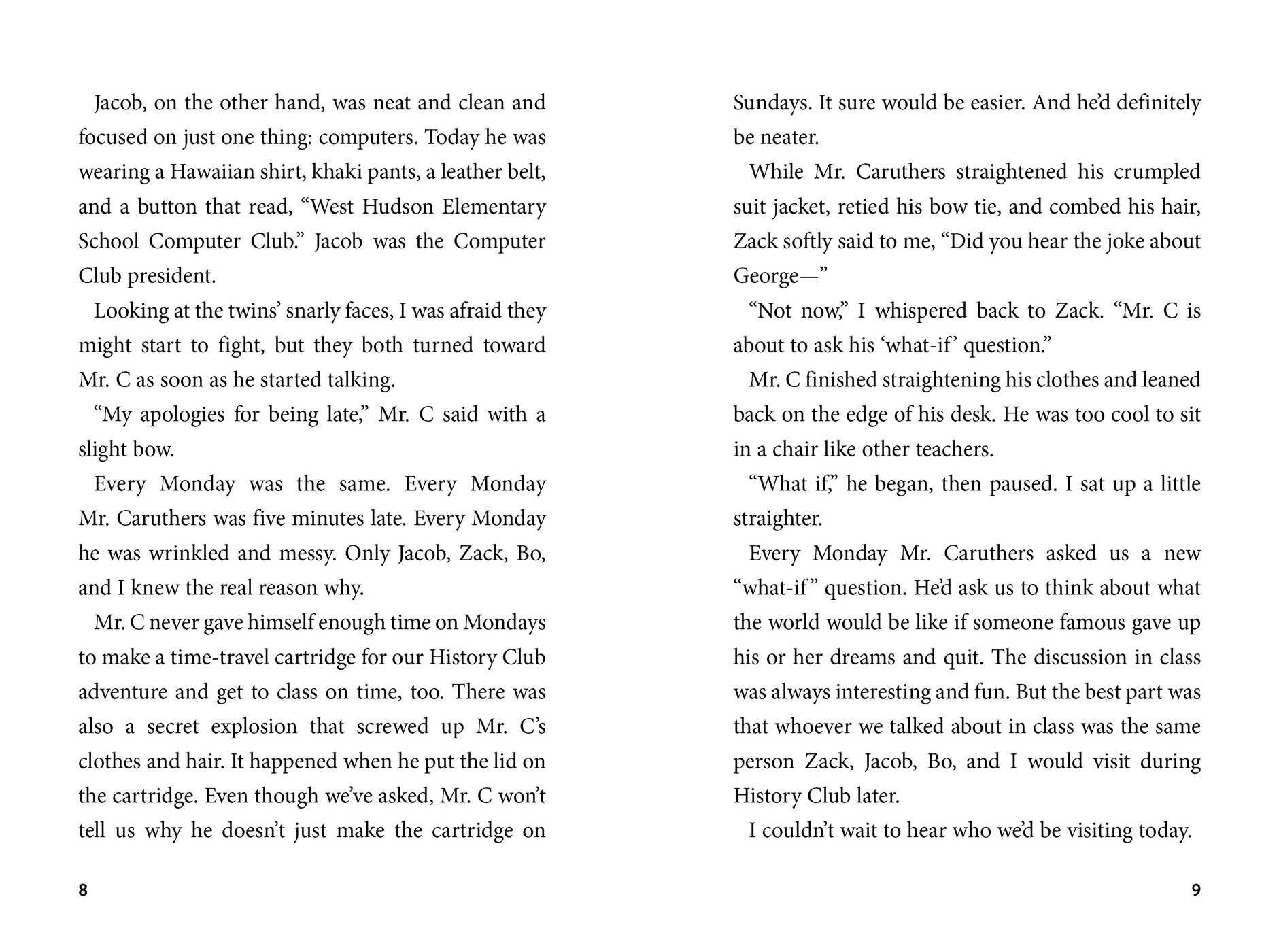 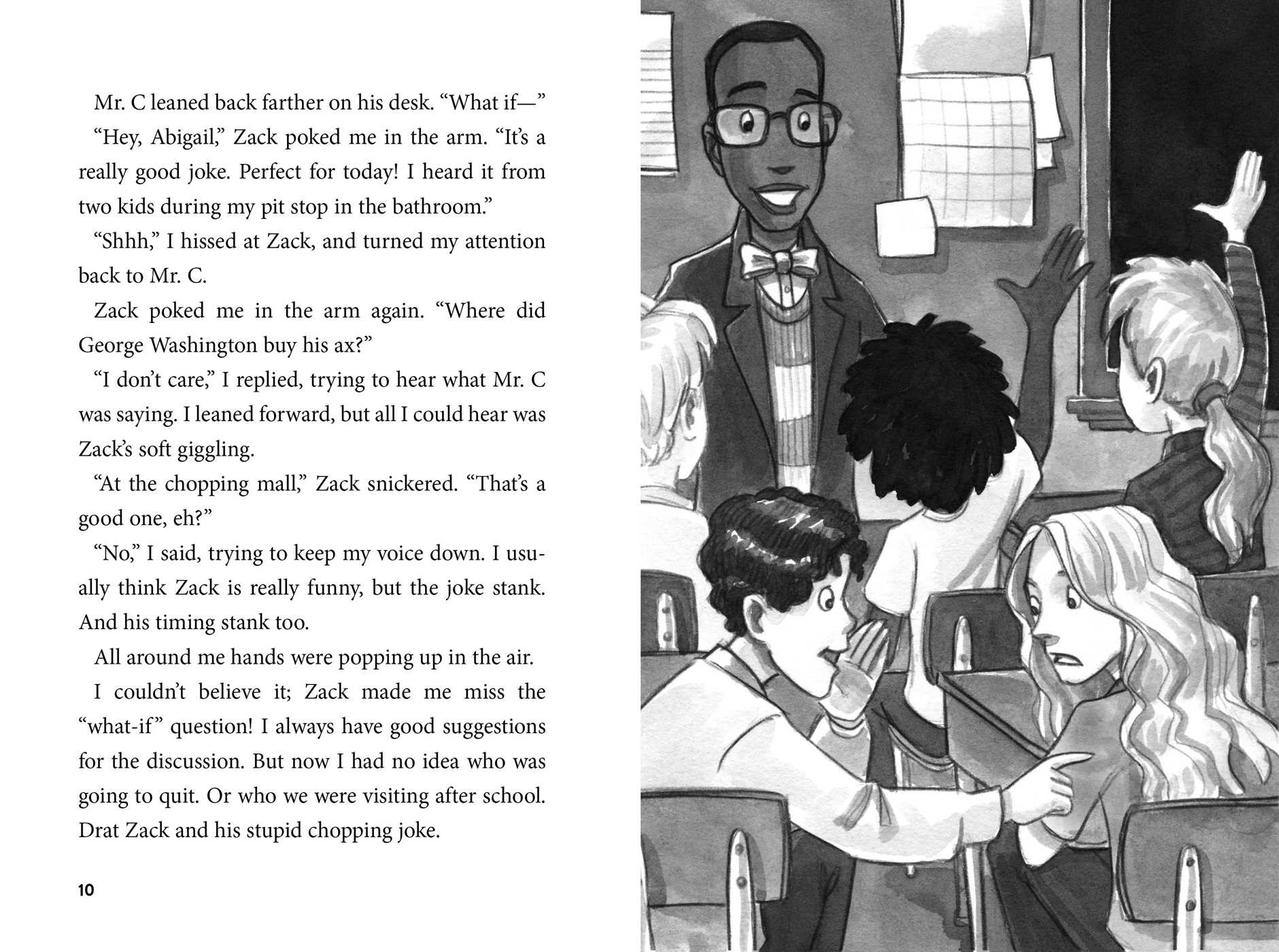 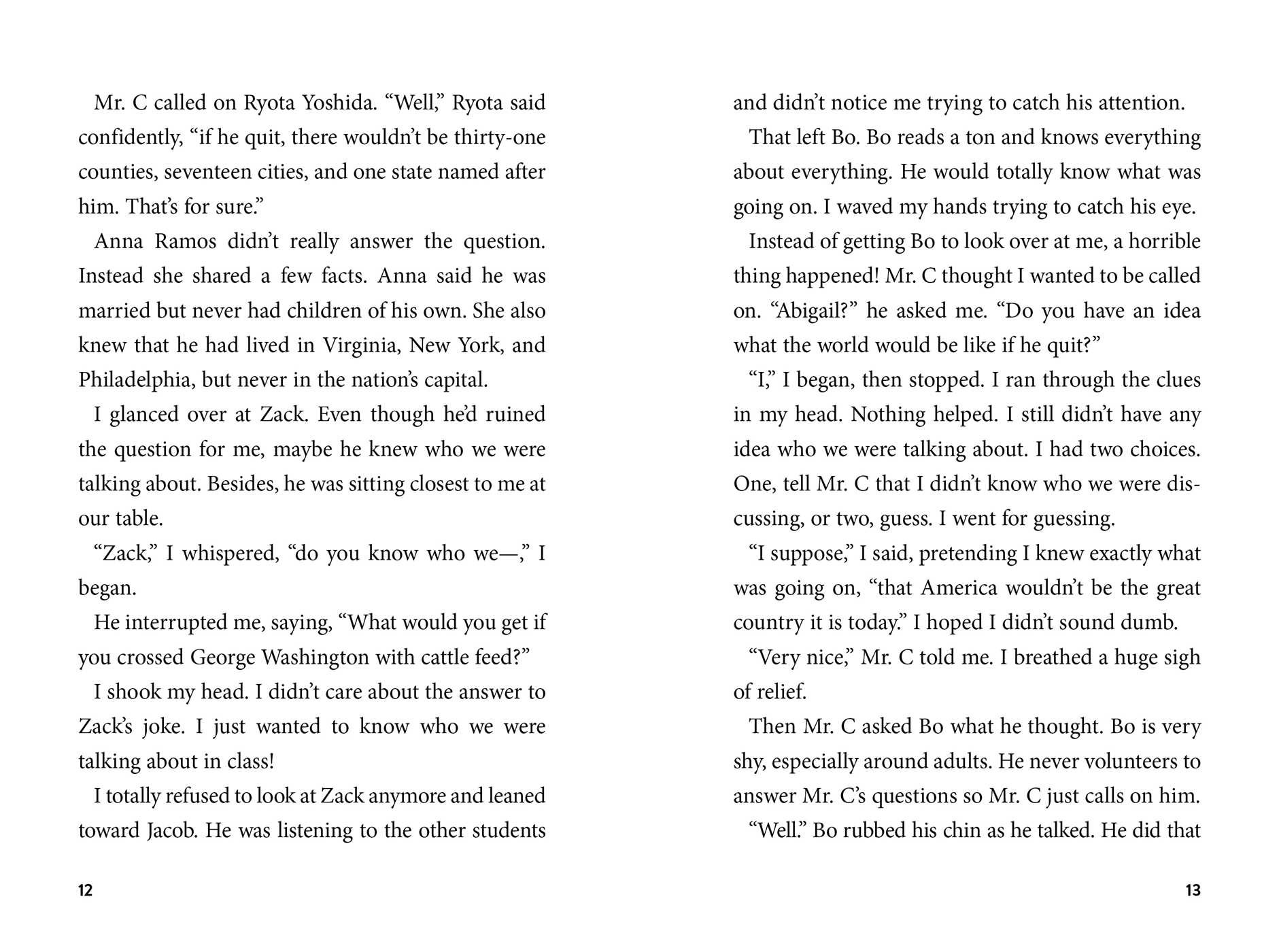 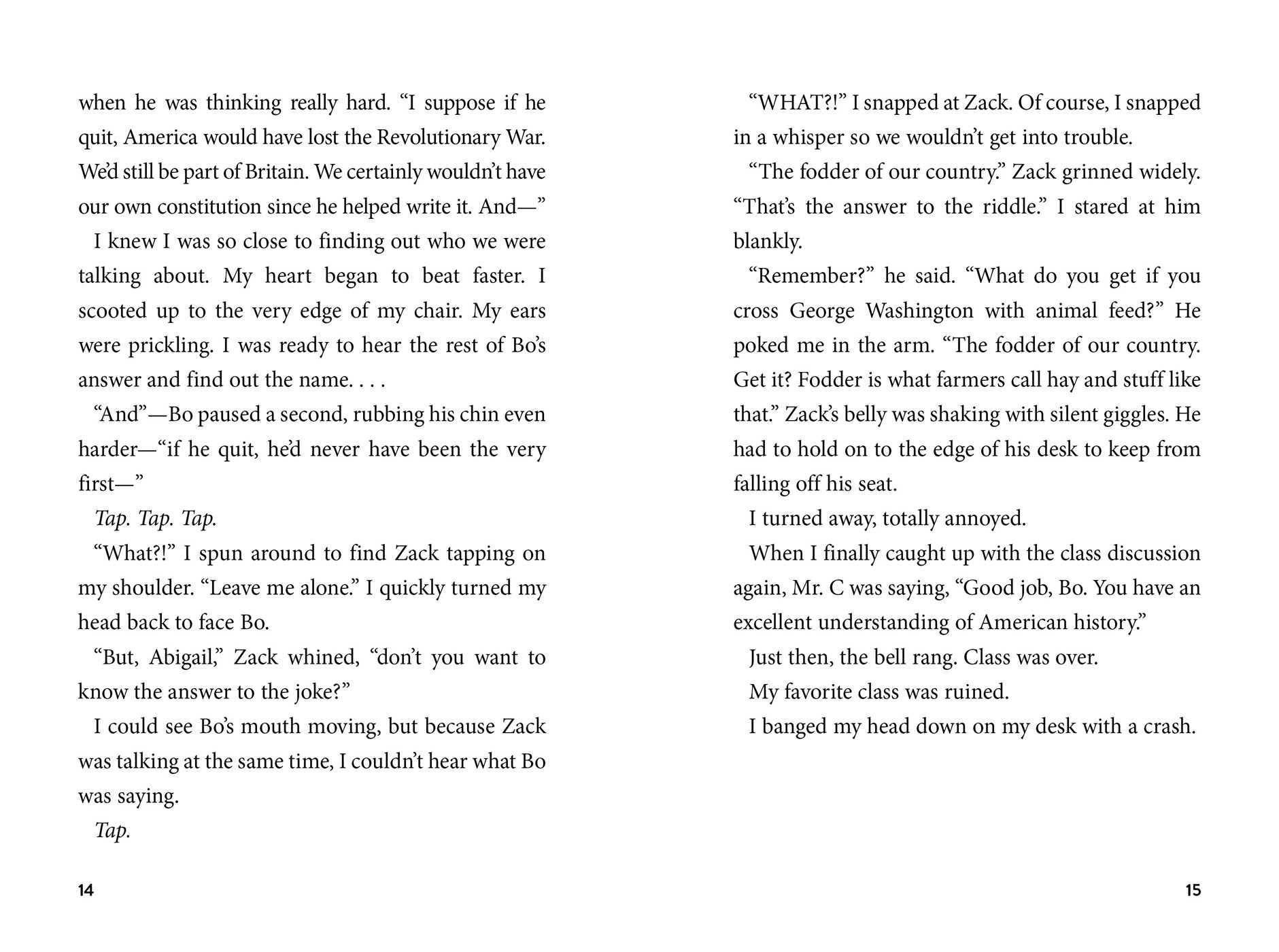 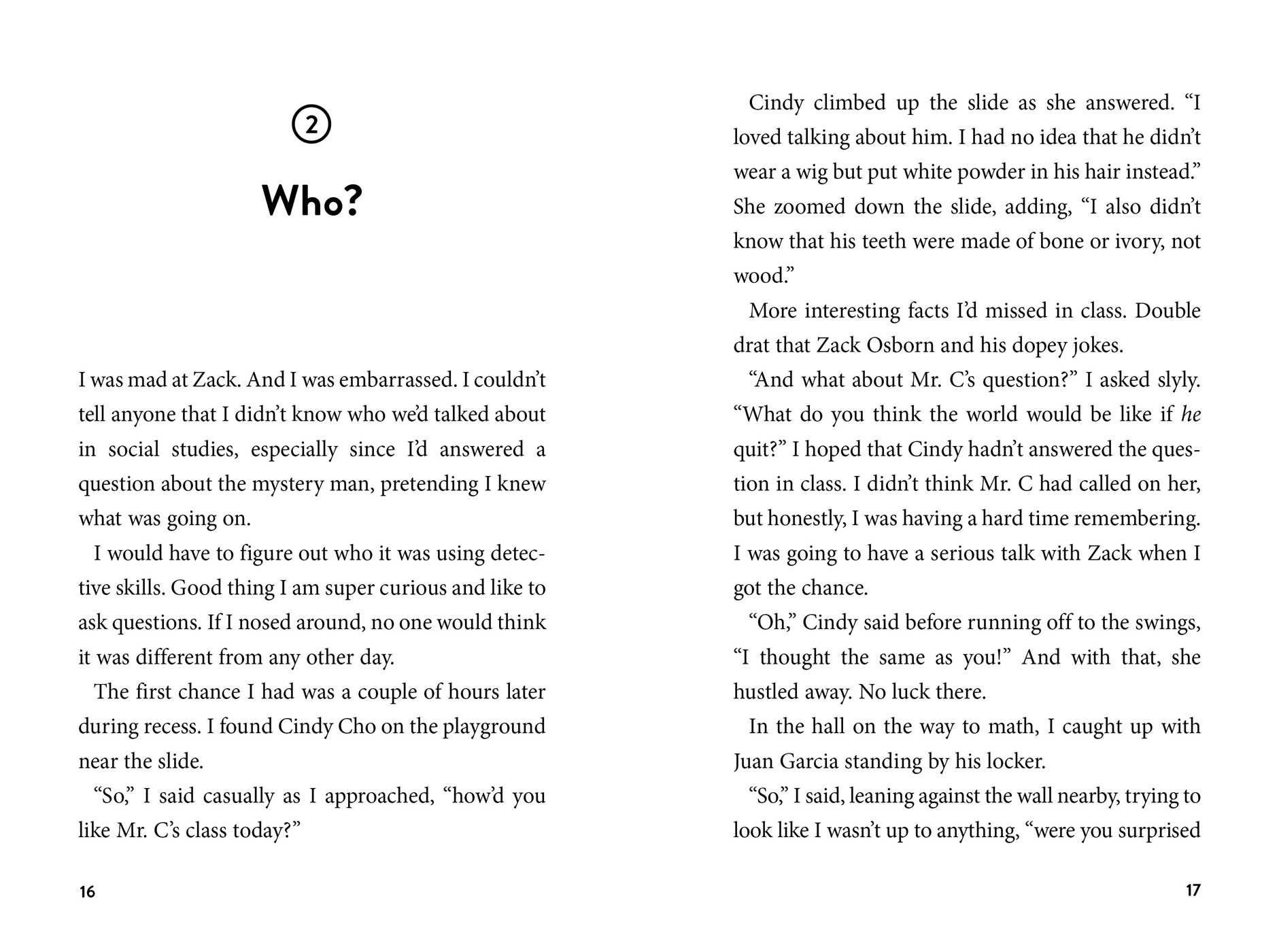 The Blast to the Past friends must convince George Washington to keep fighting the Revolutionary War—because the future of America depends on the decision of this very important founding father!

Abigail and her friends have an important job today: They must convince George Washington to stay in Valley Forge and continue to fight the Revolutionary War. The future of America depends on him!

Turns out, General Washington is extremely stubborn. No matter what the kids say, or where they take him, they can’t get him to change his mind. Will Abigail and the boys succeed, or will the father of the United States become just a blip in history?

Washington’s War Monday
When I entered the classroom, Maxine Wilson was already sitting at her table.

“Hey, Abigail,” she greeted me, like always. I’ve been friends with Maxine since kindergarten. She’s an awesome person and she has a really awesome stopwatch.

“Ready, Freddy,” Maxine replied. She held up her stopwatch and winked at me.

The school bell was the signal.

Maxine pressed the little black button on her watch. We all rushed to our seats and turned to stare at the classroom door. No one dared look away, not even for a second.

Maxine announced the time until there were only ten seconds left. The whole class always chanted the last ten seconds out loud together: “Ten. Nine. Eigh—”

The door swung open. Was it our favorite teacher, Mr. C? Could he be early for the first time all year? Nope.

“I had to make a pit stop on the way to class,” Zack explained to everyone as he walked into the classroom.

“I’ve got plenty of time.” Zack yawned as he dragged himself over to our table. Zack and I sat with Jacob and our new friend Bo. Bo’s real name is Roberto Rodriguez.

“Four seconds,” Maxine warned. Zack plopped into his chair and turned to face the door. “Three. Two. One. Zero.” Just as Maxine clicked off her stopwatch, the classroom door swung open. This time, it really was our teacher.

“See?” Zack said, leaning over and whispering in my ear. “I told you I had plenty of time. I saw Mr. C in the hallway when I was headed to class. I rushed ahead to get here first and—”

Zack snorted at his brother and challenged, “Make me.”

Even though the boys were twins, they were as different as night and day.

Today Zack was wearing long pants that were torn in a hundred places. Different-colored patches covered the rips. He had a sweatshirt on that looked like it was older than my great-grandma. Breakfast stains were all over the sleeve. When it came to personality, Zack complained a lot and quit everything he tried. But he was totally funny and always came through when we needed him most.

Jacob, on the other hand, was neat and clean and focused on just one thing: computers. Today he was wearing a Hawaiian shirt, khaki pants, a leather belt, and a button that read, “West Hudson Elementary School Computer Club.” Jacob was the Computer Club president.

Looking at the twins’ snarly faces, I was afraid they might start to fight, but they both turned toward Mr. C as soon as he started talking.

“My apologies for being late,” Mr. C said with a slight bow.

Mr. C never gave himself enough time on Mondays to make a time-travel cartridge for our History Club adventure and get to class on time, too. There was also a secret explosion that screwed up Mr. C’s clothes and hair. It happened when he put the lid on the cartridge. Even though we’ve asked, Mr. C won’t tell us why he doesn’t just make the cartridge on Sundays. It sure would be easier. And he’d definitely be neater.

While Mr. Caruthers straightened his crumpled suit jacket, retied his bow tie, and combed his hair, Zack softly said to me, “Did you hear the joke about George—”

Mr. C finished straightening his clothes and leaned back on the edge of his desk. He was too cool to sit in a chair like other teachers.

“What if,” he began, then paused. I sat up a little straighter.

Every Monday Mr. Caruthers asked us a new “what-if” question. He’d ask us to think about what the world would be like if someone famous gave up his or her dreams and quit. The discussion in class was always interesting and fun. But the best part was that whoever we talked about in class was the same person Zack, Jacob, Bo, and I would visit during History Club later.

I couldn’t wait to hear who we’d be visiting today.

Mr. C leaned back farther on his desk. “What if—”

“Hey, Abigail,” Zack poked me in the arm. “It’s a really good joke. Perfect for today! I heard it from two kids during my pit stop in the bathroom.”

“Shhh,” I hissed at Zack, and turned my attention back to Mr. C.

Zack poked me in the arm again. “Where did George Washington buy his ax?”

“I don’t care,” I replied, trying to hear what Mr. C was saying. I leaned forward, but all I could hear was Zack’s soft giggling.

“At the chopping mall,” Zack snickered. “That’s a good one, eh?”

“No,” I said, trying to keep my voice down. I usually think Zack is really funny, but the joke stank. And his timing stank too.

All around me hands were popping up in the air.

I couldn’t believe it; Zack made me miss the “what-if” question! I always have good suggestions for the discussion. But now I had no idea who was going to quit. Or who we were visiting after school. Drat Zack and his stupid chopping joke.

Stacia Deutsch is the author of more than fifty children’s books, including the eight-book, award-winning chapter book series Blast to the Past. She has also written the tween novel Mean Ghouls as well as books for the Nancy Drew and the Clue Crew and The Boxcar Children series. Stacia has been on the New York Times bestseller list for the novelizations of the Cloudy with a Chance of Meatballs and The Smurfs movies. For new releases and school visit information visit StaciaDeutsch.com.

Rhody Cohon does all the research and editing for the Blast to the Past series. She has a master’s degree in computer engineering. Rhody lives with her family in Tuscon, Arizona.