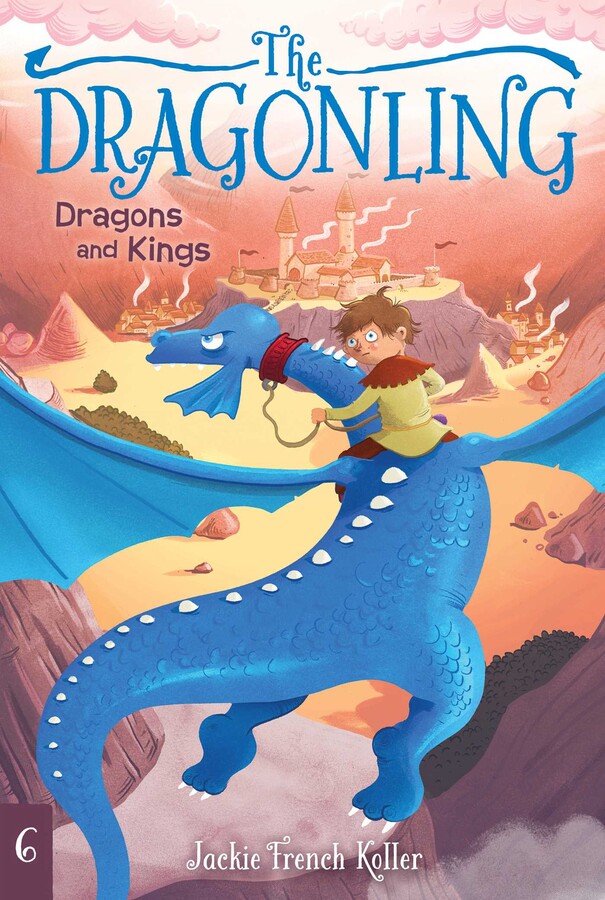 Darek, Zantor, and their friends must save their village in this sixth and final book in the fantastical Dragonling chapter book series!

Darek and his beloved dragonling, Zantor, return triumphant to their village from the Mountains of Krad. But when they arrive, they learn things have taken a turn for the worse and their village is now ruled by a ruthless tyrant. To save their home, Darek and Zantor must team up with their friends and family in a fantastical struggle to defend their home—that may just change the world as they know it.

1
SOMETHING BUMPED DAREK’S BACK, and he shot up in bed, wide awake, heart pounding. A forked tongue flicked out and kissed him on the cheek. Darek smiled and gave a sigh of relief.

“Oh, it’s you, Zantor,” he said. “Sorry I’m so jumpy. I didn’t sleep much last night, worrying about the trial.”

Darek rubbed the gentle dragon’s nose. Zantor was fully grown now, too big to fit in the house anymore. Instead he camped under Darek’s window at night and awakened Darek each morning by pushing his great head in through the window. His voice had changed too. His baby distress cry of “Rrrronk” had become a full-throated “Grrrawwk,” and his joyful “thrummm”s were so loud now, they shook the house.

Zantor nudged him again, as if to say, Let’s go.

“I’m not in the mood for a ride this morning, Zantor,” Darek said quietly. “Today the verdicts will be announced.”

“Grrrawwk,” said Zantor, hanging his head. He looked so sad that Darek relented.

“Shussh.” Darek couldn’t help giggling as his bed started to vibrate across the floor. “You’ll bounce Mother right out of bed.” He slipped into his breeches, then threw his arms around Zantor’s neck.

Zantor ducked out of the window, then unfurled his silver wings. With one spring of his great legs they were airborne. Up, up they rose, until Darek’s house looked like a little toy. Zoriak’s violet sun was warm on Darek’s back. Clean, fresh air filled his lungs and whipped at his hair. It was so good to be home, free from the gray, smoky skies of Krad. They circled the barnyard and struck off across the valley. In the morning stillness of a pond below, Darek caught sight of Zantor’s reflection. He was magnificent! Darek couldn’t help smiling as he recalled the day he had given the tiny, trembling dragonling his name. I’ll give you a strong name, he remembered saying, a powerful name. I will call you Zantor, King of the Dragons. It had seemed back then that the name would never fit. Now it fit perfectly. Zantor was everything a king should be. He was powerful and strong, but he was good, too. Not like Zarnak, who was trying to steal the throne from Rowena’s father. Or Zahr, the terrible king of Krad.

Darek shivered, recalling his prison days in Krad. His heart grew heavy at the thought of the other prisoners he had left behind. They still labored day and night for the cruel Zahr.

“If only Azzon were king again,” Darek said half aloud. “Azzon would set them free.” Azzon had once been king of all Krad. He had been cruel then too—so cruel that he’d raised his sons, Zahr and Rebbe, like beasts. When they grew older, they had turned on each other, then on him, and Azzon had fled into the Black Mountains. He would have died there in the poisonous mists, but the gentle Zynots who lived in the mountains had saved him. Their kindness had changed Azzon into a good and gentle man. Now Zahr ruled Krad in the north and Rebbe ruled it in the south, not knowing or caring that their father still lived in hiding beneath the Black Mountains.

Someday, Darek promised himself, he would go back and help his prison friends in Krad. But now he had more pressing worries. His father and brother were on trial, along with Pola’s father and Rowena’s. If found guilty, they could be put to death, and the verdict would be decided this very day.

Jackie French Koller has been a storyteller since the sixth grade, when she amused her friends by spinning tales on the playground. She has also edited a children’s newspaper, taught writing in public schools, and studied art. Ms. Koller lives in Groton, Massachusetts, with her husband.

More books in this series: The Dragonling