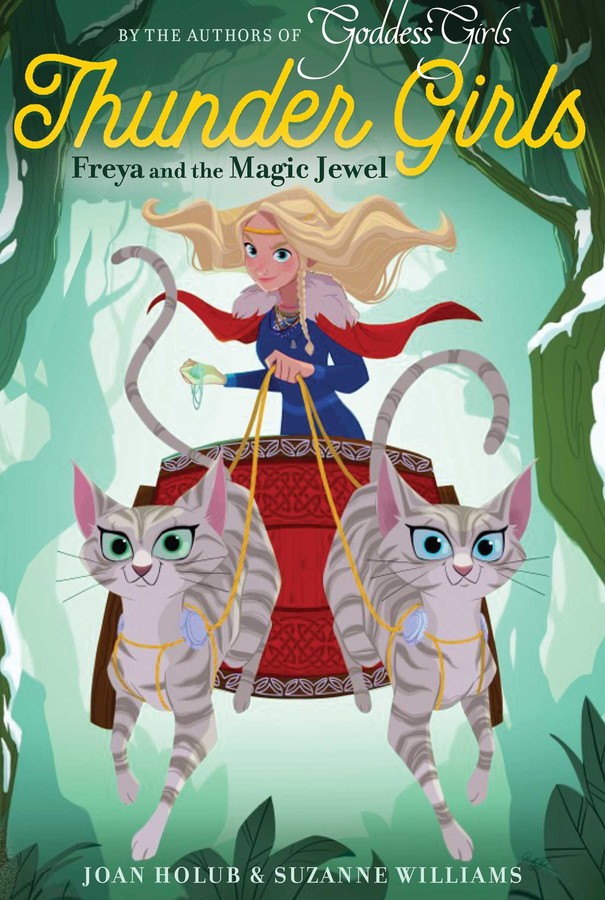 From the authors of the Goddess Girls series comes the first book in a brand-new series steeped in Norse mythology, magic, adventure, and friendship.

“Gold and Gullveig I cannot see. But here is a vision that comes to me; Adventure for you is about to start. Near Asgard you must find the heart. A Secret world there hides away, which holds the power to stop doomsday!”

When eleven-year-old Freya hears that prophecy from her magical jewel, she isn’t sure what to make of it. Doomsday? She will find the key? Mere seconds after that prediction, she receives a mysterious invitation to Asgard Academy from the powerful Odin, who commands her to “bring her magic” to Asgard.

With encouragement from her twin, Frey, Freya reluctantly heads out on their new adventure. And Freya’s first challenge begins before she even steps foot in Asgard. While trying to navigate the treacherous Bifrost Bridge, she drops her magical jewel off the bridge, and a sneaky pair of dwarves take her jewel down to the world of Midgard!

Without that jewel, Freya thinks she is powerless. But with the help of her pod-mates at Asgard, Freya discovers a world that is bigger and more mysterious that she ever imagined! There, she learns the true terror that Ragnarok—the doomsday her jewel warned her about—could mean for Asgard Academy if she and her new friends, the Thunder Girls, don’t stop it!

“Fly, kitty, kitty!” the girlgoddess Freya called to her magical gray tabby cats. Her long pale-blond hair fanned out behind her as she urged them onward. The red cart they pulled soared a half-dozen feet above the snowy ground, around tree trunks and under branches, sometimes barely missing big, mossy boulders. It wasn’t easy to get this pair of pony-size cats to fly the cart in the direction she wanted them to go!

Upon reaching a familiar forest path lined with ferns, she called out, “Whoa, kitty, kitty!” To her relief, the cats obeyed and set down in the snow. “Good job, silfrkatter,” she said, using the Norse word that meant “silver cats.” “Our first trip together. And we made it!” She leaned forward to pat the cats’ soft fur, and they purred happily.

Remembering why she’d come all this way, Freya jumped from the cart and commanded, “Catnap!”

Plink! If anyone had been watching at that moment, the cats and cart would’ve seemed to instantly disappear. However, in reality, they had only shrunk down to a single cat’s-eye marble. Freya’s twin brother, the boygod Frey, had given her the colorful marble as a gift only yesterday, on her twelfth birthday.

She snatched the marble from the air before it could fall to the snowy ground. Then she slipped it into one of several fist-size pouches that dangled from the nine necklaces of beads, seeds, or metal chain that she wore. Each necklace held one or more items, such as keys, small tools, or special keepsakes.

Nine was a lucky, super-special number. Because as everyone knew, there were nine worlds altogether in the Norse universe. All were located on three enormous, ring-shaped levels stacked one above the other. Vanaheim, the world where Freya lived, was only one of those worlds!

Freya’s breath made quick fog-puffs in the cold air as she crossed the path and stepped into a small hut. It was the home of the old sorceress Gullveig, who she and her brother called amma. That meant “grandmother,” though Gullveig was really their nanny, not a relative. Once inside, Freya saw that the hut was still as empty as it had been for the last five months. Her shoulders slumped in disappointment.

She pulled a walnut-size jewel shaped like a teardrop from another necklace pouch and stared at it. It was pale orange now, which meant it felt unsettled, like she did. While in her possession, it changed colors according to her mood!

“Tell me, jewel Brising, where is Gullveig?” she asked it. “Did she find the gold she was looking for in Asgard?”

Her jewel’s voice came as a low, magical humming sound that only she could hear and understand:

“Gold and Gullveig I cannot see.

But here is the vision that comes to me:

Adventure for you is about to start.

In Asgard you must find the heart.

A secret world there hides away

That holds the power to stop doomsday!”

Startled, Freya stared at the teardrop jewel. “Secret world? Doomsday? I’m not going to Asgard. I’m not! What are you talking about, Brising?” She brought the jewel so close to her nose that her blue eyes almost crossed, wanting it to take back what it had said. It didn’t. Although it had the power to show Freya the future, sometimes it only revealed bits of information. It didn’t always answer her questions, either, so she could never be sure what it did or didn’t know. This time, though, she was positive it was wrong, wrong, wrong. Why would she ever leave Vanaheim? She loved it here!

As Freya stepped out of the hut into the cold air, Brising spoke up again, though she had asked it nothing more. This time it said:

“Five months ago a war began.

Five days ago that fight did end.

Five hours ago your fate was sealed—