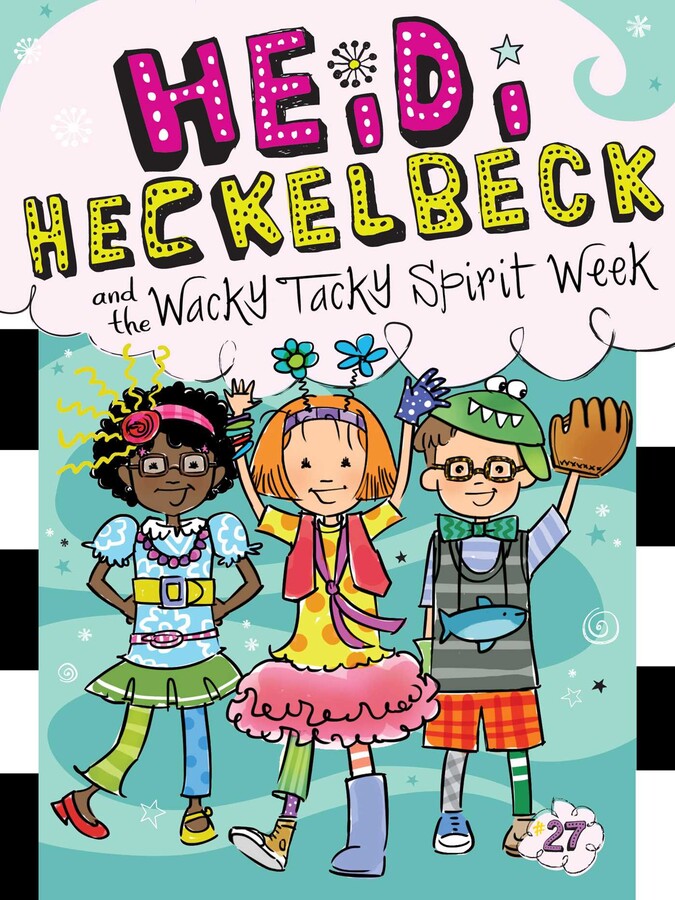 Heidi’s school is having a school spirit week in the twenty-seventh Heidi Heckelbeck adventure!

It’s Spirit Week at Brewster Elementary and everyone is excited! From Crazy Hair Monday to Wacky Tacky Wednesday to Superhero Thursday, students are invited to be as creative and zany as possible. Heidi and her friends can’t wait to dress up. But when Melanie Maplethorpe brags about being the most spirited student ever, Heidi decides to become the wackiest witch of all!

THING-A-MA-BOBS
Heidi Heckelbeck handed a brown paper bag to her little brother. She had written his name, Henry Heckelbeck, on it.

Henry wrinkled his brow. “Okay. But I have one question. What’s a THINK-a-ma-bob?”

Heidi sighed loudly. “The word is ‘THING-A-MA-BOB.’ They are like doohickeys and random stuff we may need for this week. Do you understand?”

Heidi looked at the clock. “Ready? On your mark. Get set. GO!”

Then Heidi and Henry took off on a wild thing-a-ma-bob hunt.

Henry ran to the desk in the kitchen and yanked open the top drawer. He stuck two rubber bands and a plastic spider in his bag.

Heidi found the leftover party favor drawer and pulled out a purple tiara. There were also silver-and-pink beaded necklaces. Then she searched all the cupboards in the family room.

“Score!” she cried, holding up a can of unopened neon-green Silly String. She plopped it into her bag.

Her next stop was the art supply cabinet. Heidi grabbed a tube of sequins, a handful of pom-poms, and a fistful of pipe cleaners. She had no clue how she was going to use all this stuff, but she would worry about that later.

Down the hall, Henry was busy checking the bathroom drawers. He crammed dental floss and cotton balls into his bag.

Meanwhile, Heidi headed all the way up to the attic. She opened a tub of Christmas decorations. There have to be good thing-a-ma-bobs in here, she thought.

Heidi pulled out a tinsel garland and wound it around her neck like a sparkly boa. Then she thumpity-thumped downstairs to the kitchen.

Henry had jammed an empty box of Chocolate Oaty-O’s on his head.

“What do you think of my hat?” he asked.

Heidi giggled. “I think it’s CRUMBY. Get it? Cereal? Crumbs?”

Henry rolled his eyes. “I’m supposed to be a cereal BOX-er.”

He punched the air with his fists.

“I get it!” Dad said, air-boxing as he walked into the room with Mom.

Heidi and Henry looked at their mom like this was the silliest question on the planet.

“You mean you don’t KNOW about this week?” Heidi asked.

Her parents shook their heads.

“Spirit Week starts tomorrow!” Heidi explained. “Each day we have to show our school spirit in different ways. It starts with Crazy Hair Day!”

Henry pranced in front of Heidi with the cereal box still on his head. “Tuesday is Silly Hat Day!”

Then Heidi bumped her brother to the side and fluffed up her boa. “Wednesday is Wacky Tacky Day!”

Across the room, Henry climbed onto a chair and struck a pose with his fists on his hips. “Can you guess what THURSDAY is?” he asked his parents.

Dad snapped his fingers. “Is it Crazy Kids Standing on the Furniture Day?”

“Nope! It’s SUPERHERO Day!” Henry cheered. Then he jumped off the chair and pretended to fly.

Heidi shook her head. “Friday is the FUND RUN! Students run as many laps around the track as they can, and their friends and family donate money to the school for each lap.”

Dad put his arm around Mom. “Well, is there anything we can do to help?”

Heidi and Henry shot each other a look.

“YES!” Heidi cried. “Can you help us DYE our hair?”
Wanda Coven