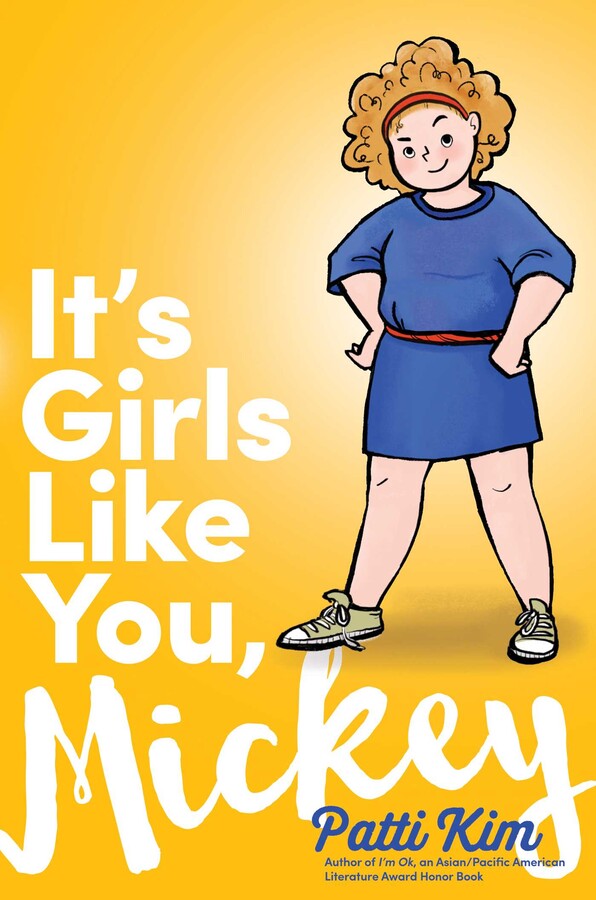 Mickey navigates the pitfalls, heartbreaks, and triumphs of seventh grade in this uplifting companion to I’m Ok, which award-winning author Gene Luen Yang praised as “funny and heartfelt.”

For the first time in her confident, bold life, Mickey McDonald is nervous about starting school. Her best friend, Ok, has moved away; her father has probably left town for good; and she can’t afford to go back-to-school shopping. But she’s going to make the most of things because that’s the kind of person Mickey is. Nothing’s going to stand in her way or get her down.

Still, the first few days of school are rough, until she becomes friends with Sun Joo, who has just moved to town. Their connection is instant and strong. But things get complicated when Sydney, the popular (and mean) girl in Mickey’s class, also takes a shine to Sun Joo. Suddenly Mickey is facing her first ever friend breakup, and it’s getting harder and harder to keep her chin up. Luckily, Mickey’s made of tough stuff.

Chapter One one
It ain’t normal for me to feel nervous about nothing, but I got knots this morning. It’s the first day of seventh grade. I’m feeling shy. I’m a lot of things, but shy’s not one of them, so I don’t know what’s wrong with me.

I went through, like, umpteen million outfits before I settled on this one. A pair of old pink tights I turned into leggings by cutting open the feet ’cause they’re too short for me. My daddy’s faded old T-shirt with KEEP ON TRUCKIN’ across the front. It was one of his favorites, but he left it behind. Finders keepers. Losers weepers. I hope he’s weeping, ’cause I’m done with weeping. I belted the shirt with twine I braided. Dangling off the two ends are clusters of paper clips in rainbow colors.

Didn’t get to go back-to-school shopping. After we got home from Ocean City, my ma was sore in ways I can’t even start to describe, and that made her good and fed up with Benny and me. Daddy didn’t come back home with us. I should’ve held my tongue, but I brought up how we needed school supplies and new shoes and clothes, especially Benny ’cause he’d get plastered showing up first day of third grade in my old flip-flops. Ma lost it. She lit a cigarette, inhaled big like she was fueling up to smoke me alive, evil-eyed me, crossed her legs, and shook her foot like it was revving up to kick me across the living room.

Then our yellow Lab, Charlie, sat next to her on the couch. Ma rested her hand on his head and said, “Well, then, I guess Charlie’s gotta go.”

“I got an idea. You could quit them cigarettes,” I said.

Benny started whimpering and hugging all over Charlie, and I could feel my heart cracking into a million pieces.

“In your dreams, Mick. You could quit eating,” she said, and blew out a long stream of smoke.

I was going to slap her with “What kind of mother are you?” but I held back. Her foot was twitching so mad that her slipper flung off. And she wasn’t bothering with no ashtray. Her trigger-happy thumb flicked ash everywhere, burning tiny black holes on the carpet and the couch. She didn’t snap back at me like she normally does with some whip sting of a comeback. She just fidgeted all nervous, looking like she was at a loss. Then her lips trembled like she was about to cry.

Ma is country strong. Daddy used to say she’s built Ford tough. She grew up on a farm in Ohio, tending to horses, cows, chickens, and pigs. She killed chickens with her bare hands. She got no mind for fairy tales and beauty pageants and princess tears. She hated me being in all them pageants. Didn’t make no bit of sense to her.

When I saw Ma’s eyes filling with tears, I knew we were in a bad way. A weight of worry came knocking at my gut. I felt sorry, so I folded and said, “Never mind. We’ll make do.”

So this here outfit’s how I’m making do. At least I’m having a good hair day. I fashioned myself a nice thick headband using Daddy’s one and only necktie, teased the top of my hair poofy and flipped up the ends so I look like Frances “Gidget” Lawrence. Yeah, Gidget from that old TV show nobody but me watches. I’m not one to get easily roped in by sap and circumstance, but that girl makes me happy. That last snapshot in the intro of her being kissed on the cheek by Don Porter, who plays her dad, always makes me sigh.

I sigh, checking myself out one last time in the mirror.

Stuck on the frame of the mirror is my friend Ok’s postcard. I miss him. He was my one and only buddy at school last year. I kind of forced him to be my friend, but there weren’t no way we would’ve ended up friends if I hadn’t. I taught him how to roller-skate. We did the talent show together. He braided my hair. A whole big thing went down with him running away from home, which ended up happily ever after, thanks to yours truly, you’re welcome. I practically saved his life. I wish he hadn’t moved.

First day of seventh grade would be a slice of key lime pie if I knew Ok was going to be on that bus saving me a seat. Or in that cafeteria eating his Korean food, waiting for me to sit next to him.

Instead, I’m going to be all by my lonesome again. Worst thing about not having a friend is there ain’t no Teflon. There ain’t no home base. There ain’t no one to stand next to and feel like weirdos together. By myself, I’m an open target. It don’t help none that I’m so proud. It’s the pride that brings on the attacks. They see me like I’m some poor fat lazy white trailer trash who shouldn’t dare express herself, let alone be proud. Who does she think she is?

I wish I didn’t care about the teasing, but I do. I put on a good show and act like it don’t bother me none, but it does.

Where’s Ok Lee when I need him? He’s way in another county, that’s where. I’ll bet he’s a bundle of nerves too, ’cause he’s starting a brand-new school. And I know for a fact he did not grow one inch over the summer or don’t look any less Chinese. That’s how they teased him, no matter how many times I told them he ain’t Chinese—he’s Korean. Fat poor white girl and skinny little Chinese boy with porcupine hair. Together, we were a team of Teflon.

I miss him. We’re pen pals now. He sent me a postcard cut out of a Life cereal box. L-I-F-E in rainbow colors. “Who’s there?” was written on the back. The only reason he did that was ’cause I sent him a postcard I cut out from a mac and cheese box with “Knock! Knock!” written on the back. I guess it’s my turn now to answer who’s doing the knocking.

“Michaela Shannon McDonald,” I say to my reflection with my back straight and fists on hips. “Get out there and be your absolute ultimate.” 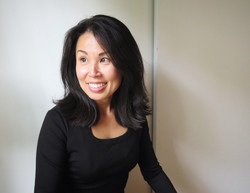 Born in Busan, South Korea, Patti Kim immigrated to the United States on Christmas, 1974. Convinced at the age of five that she was a writer, she scribbled gibberish all over the pages of her mother’s Korean-English dictionary and got in big trouble for it. But that didn’t stop her from writing. The author of I’m Ok; It’s Girls Like You, Mickey; A Cab Called Reliable; and Here I Am, Patti lives in University Park, Maryland, with her husband, two daughters, and a ferocious terrier. Visit her online at PattiKimWrites.com.

"Despite money stress at home, Mickey stays upbeat and inventive, as when she creatively repurposes a pillowcase into a skirt, and models both empathy and compassion while confidently standing up to the school’s mean girl. Along with her desire to help others, Mickey’s unfiltered commentary, for example about her first period and her mother’s smoking habit, make her an inimitable protagonist worth rooting for."

"In her follow-up to I’m Ok (2018), Patti Kim has crafted a story that anyone who is, or has been, in middle school can relate to. Readers will be cheering for Mickey’s pluck and perseverance to the last page."