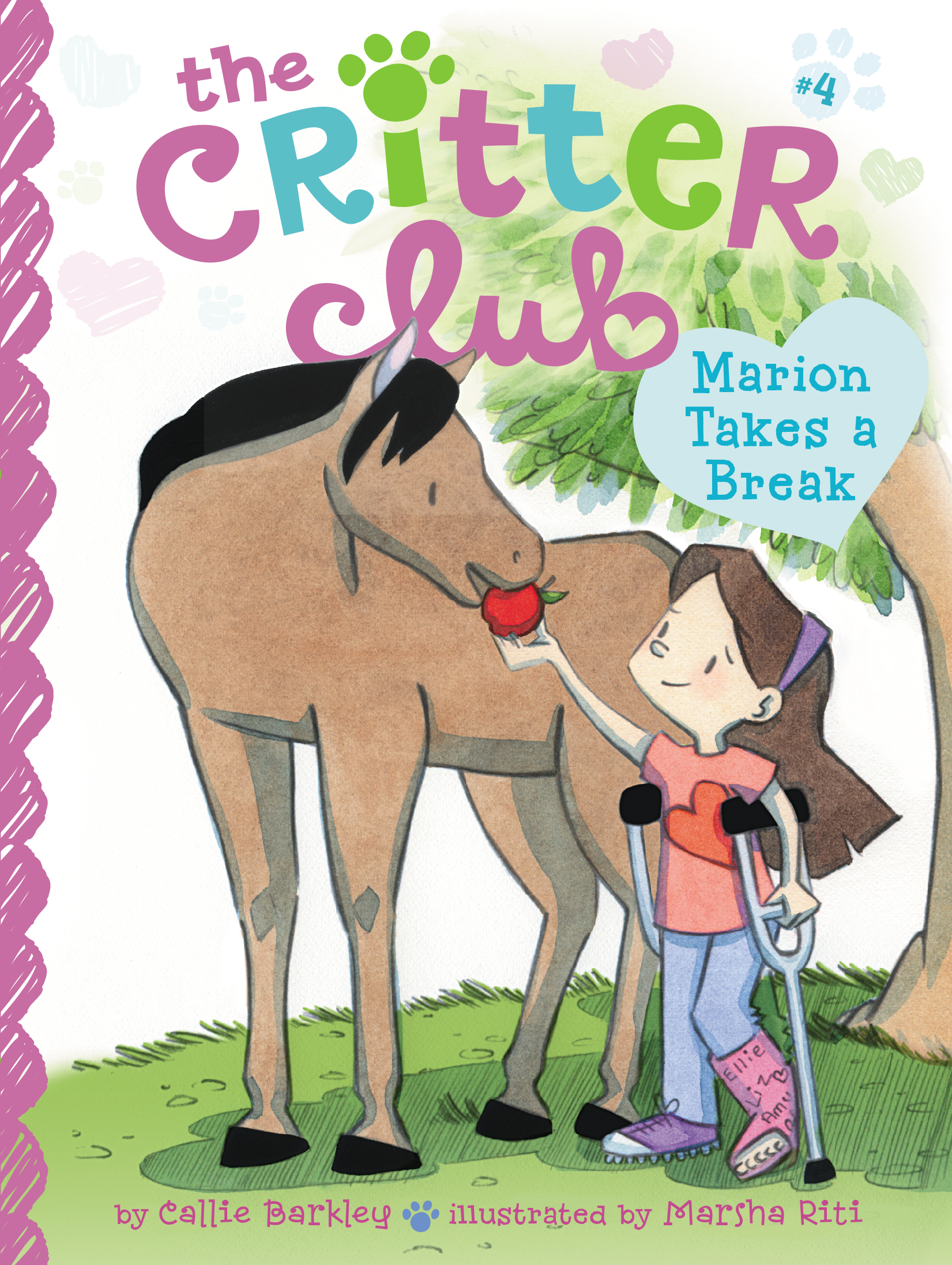 When an injury slows her down, Marion counts on The Critter Club to help her realize what’s most important.

From violin lessons to training for an upcoming horse competition, Marion is scheduled to the max. Even though she always makes time for her duties at The Critter Club, she is beginning to feel overwhelmed. But when an accident forces Marion to slow down, Marion relies on her friends (the two- and four-legged ones) to cheer her up! As Marion’s ankle heals, she discovers a new talent—and realizes that winning isn’t everything.

With easy-to-read language and illustrations on almost every page, The Critter Club chapter books are perfect for beginning readers.

Too Much to Do
In the school cafeteria Marion saw Amy, Ellie, and Liz sitting near the window. Marion hurried over. She hoped she would have time to eat her lunch. The recess bell was going to ring in just ten minutes!

“What took you so long?” Amy asked. She scooted down the bench to make space for Marion.

“I couldn’t find my lunch!” Marion said, sitting down. “I thought it was in my cubby, but it was actually in my backpack under my ballet shoes and leotard.”

I’ve got to get organized! Marion thought as she started to eat. Better add that to my to-do list!

Marion was good at making lists. It helped to keep her busy life in order. Now that it was fall, Marion was busier than ever! She worked very hard in school and always got perfect grades. She also had piano lessons and ballet class every week.

Then there was her horse, Coco. Marion went to the stables at least three times a week. Having a horse was a lot of work, but Marion loved every bit of it.

“So what were you talking about?” Marion asked. She took a big bite of her sandwich.

“The kittens!” Ellie exclaimed. There was a new litter of kittens at The Critter Club, the animal shelter that the four girls helped run in their friend Ms. Sullivan’s barn. The girls had met Ms. Sullivan when they found her lost puppy, Rufus.

After that, Ms. Sullivan decided the town needed an animal shelter. She had an empty barn; Amy’s mom, Dr. Purvis, had a lot of advice to offer since she was a veterinarian; and the girls had lots of energy—plus a love of animals.

So The Critter Club began! Since then the girls had helped bunnies and a turtle. They had even done pet sitting over the summer. Now it was up to them to find homes for an entire litter of kittens!

The kittens’ mother was a stray cat. When a teacher found them all behind the school, she brought them to the vet clinic. Dr. Purvis had suggested that the five healthy kittens stay at The Critter Club, and the girls were very excited to help take care of them!

“The mother cat and one kitten are still at the clinic,” Amy told her friends. “My mom said that the mama cat needs more rest. And even though the tabby kitten’s injured paw is getting better, he still needs to heal for a while longer too.”

The girls took turns helping out at The Critter Club after school and on weekends. “Liz and I had such a great time at the club yesterday afternoon. Those kittens are just so cute!” Ellie squealed.

“That’s the thing,” Amy said, “it should be easy to find homes for them. I was thinking . . . what if we have a big party at The Critter Club? People could come meet the kittens!”

Marion, Ellie, and Liz all nodded. “That’s a great idea!” said Liz. “Everyone would see how cute they are!”
Callie Barkley

Marsha Riti illustrated the picture book The Picky Little Witch by Elizabeth Brokamp and The Critter Club series by Callie Barkley. She lives in Austin, Texas, where she likes to take long walks, stopping frequently to pet neighborhood kitties.