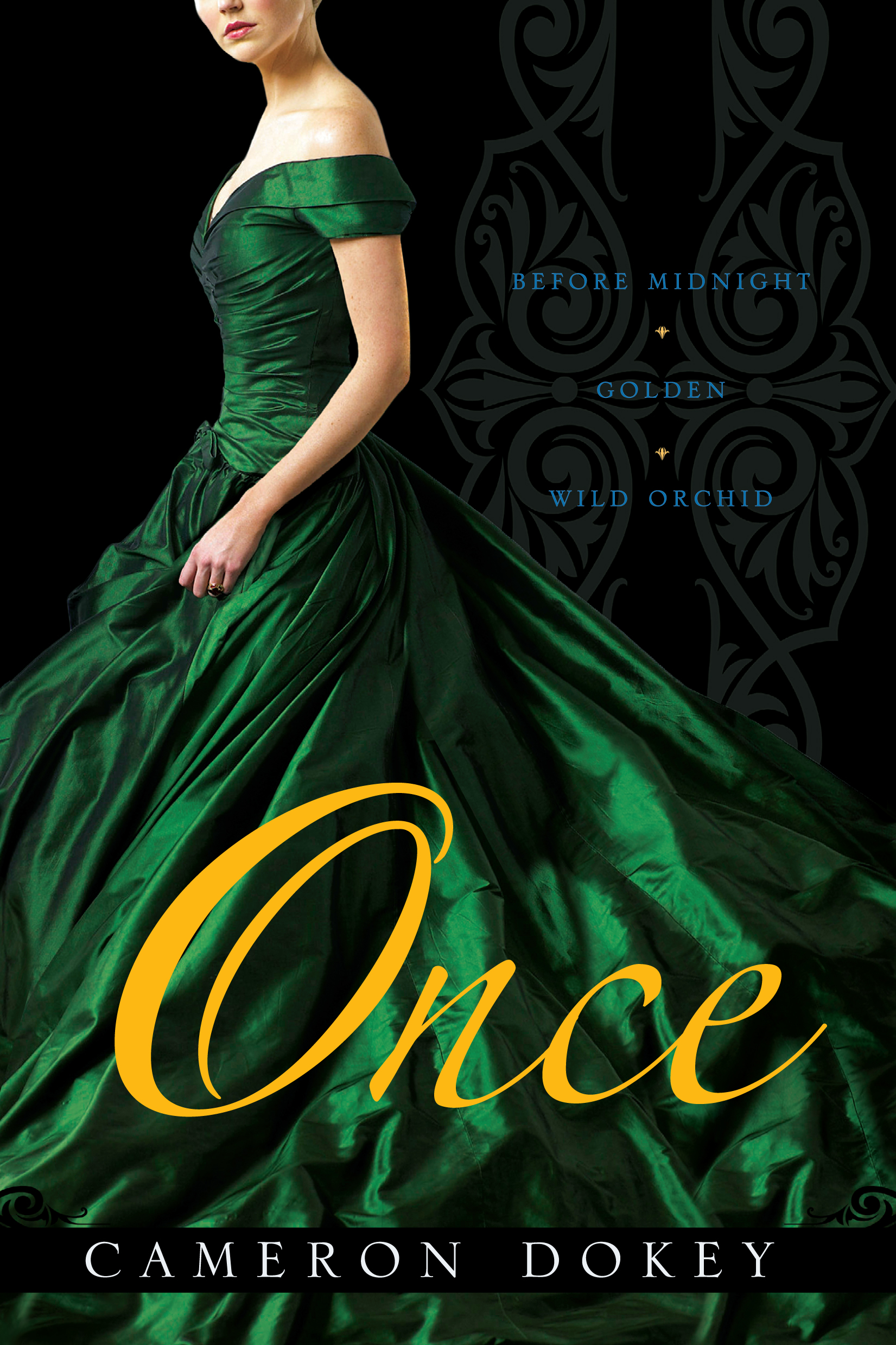 By Cameron Dokey
PRICE MAY VARY BY RETAILER

Read “happily ever after” with this magical repackage that includes three enchanting, retold fairy tales.

In this value-priced bind-up of three beloved retellings, readers will journey to faraway fairy tale lands. Before Midnight revisits Cinderella’s story in France, Golden puts a new spin on Rapunzel’s romance, and Wild Orchid reimagines the Chinese tale of Mulan. With so much real-life drama in today’s busy world, Once allows readers to escape into whimsical realms where every story has a happily ever after.


WHAT DO YOU KNOW ABOUT YOURSELF? WHAT ARE YOUR stories? The ones you tell yourself, and the ones told by others. All of us begin somewhere. Though I suppose the truth is that we begin more than once; we begin many times. Over and over, we start our own tales, compose our own stories, whether our lives are short or long. Until at last all our beginnings come down to just one end, and the tale of who we are is done.

This is the first story I ever heard about myself: that I came into this world before my time. And that my coming was so sudden, hot, and swift, it carried everything before it away, including my mother’s life.

Full of confusion was the day of my birth, of portents, and of omens. Just at daybreak, a flock of white birds flew across the face of the sun. Its rising light stained their wings bloodred. This was an omen of life taking flight.

At full noon, every single tree in every single orchard on my father’s estate burst into bloom at once, in spite of the fact that it was October. This was an omen of life’s arrival.

At dusk, a great storm arose, catching everyone by surprise. My mother was in her garden, the one she planted and tended with her own two hands, when two claps of thunder, one from the east and the other from the west, met above her head in a great collision of sound. The earth shook beneath her feet. Crying out, my mother tumbled to the ground. What this portended nobody ever did decide, because it was at precisely this moment that I declared my intention to be born.

Fortunately for my mother, she was not alone. The healer, Old Mathilde, was with her, as she often was when my father was away from home. Just how old Old Mathilde is, no one really knows. But no matter what her years, she was strong and hale enough to lift my mother up and carry her indoors—through the gate in the garden wall and around the side of the house, up the steps to the front door, and across the great hall. Then, finally, up a wide set of stairs from the great hall to the second floor. By the time Old Mathilde reached my mother’s chamber, it was storming in earnest, and she, herself, was breathing hard. The wind wailed like a banshee. Hailstones clattered against the roof with a sound like military drums.

Old Mathilde set my mother gently on the bed, paused to catch her breath. Then she summoned Susanne, who worked in the kitchen, instructing her to bring hot water and soft towels. But when Mathilde went to stir up the coals, the wind got there first, screaming down the chimney, putting out the fire. Not content to do this in my mother’s room alone, the wind then extinguished every other fire throughout my father’s great stone house by the sea, until not so much as a candle remained lit. All the servants quaked in fear. The women buried their heads beneath their aprons, and the men behind their arms, for nobody could remember such an event ever occurring before.

And so it was first in shadow, and then in darkness, that Old Mathilde and my mother strove to bring me into the world. Just before midnight, I arrived. At my coming, the storm ceased as suddenly as it had begun. A great silence filled the great stone house. Into it came the loud voice of the sea, and then my mother’s quiet voice, asking Old Mathilde to place me in her waiting arms. She asked this just as the clocks throughout the house began to strike midnight: the only hour in all the world that begins in one day and ends in another. This was the moment I knew my mother’s touch for the first and only time.

And this is the story Old Mathilde has told me each and every time I asked her to: that, with my green eyes, I gazed up, and with her green eyes, my mother gazed back down. She ran one hand across my head, her fingers lingering on my bright red hair, for this, too, was the exact same shade as her own. Then she bent her head and pressed a kiss upon my brow. I carry the mark of it to this day, the faintest smudge of rose just at my hairline.

“Mathilde,” my mother said then, and with the sounding of her own name, Old Mathilde understood what my coming into the world before my time would cost. For she recognized the sound my mother’s voice made—a sound that was both less and more than it had ever been before.

No one is better at understanding the world than Old Mathilde, at being able to see things for what they truly are. This is what makes her such a good healer, I suppose. For how can you mend a thing, any thing, if you cannot truly see what is wrong? Some things, of course, cannot be healed, no matter how much you want them to be, no matter how hard you try. Old Mathilde was not a magician. She was simply very good at helping wishes come true.

“Will you hear a wish?” my mother asked now.

Just for an instant, Old Mathilde closed her eyes, as if summoning the strength to hear what would come. For my mother was asking to bestow the most powerful wish there is, one that is a birth and death wish, all at the same time. Then Old Mathilde opened her eyes and gave the only answer she could, also the one that was in her heart.

“I will grant whatever you wish that lies within my power, Constanze, my child.”

Constanze d’Este. That was my mother’s name.

“I wish for you to be my daughter’s godmother,” Constanze d’Este replied. “Love her for me, care for her when I am gone, for I fear her father will do neither one. When he looks at her, he will not find joy in the color of her hair and eyes. He will not see the way that I live on. Instead, he will see only that she came too soon, and that her arrival carried me out of this life.

“Besides, he is a man and a great lord. He wished for his first child to be a boy.”

“What you wish for is easily granted,” Old Mathilde said. “For I have loved this child with all my heart since she was no more than a dream in yours. As for Etienne . . .” Etienne de Brabant. That is my father’s name. “I suppose a man may be a great lord and a great fool all at once. What shall I call her, while I’m loving her so much?”

At this point in the story, Old Mathilde always does the same thing: She smiles. Not because the circumstances she’s relating are particularly happy, but because smiling is what my mother did.

“Call her by whatever name you think best,” she replied. “For you will raise her, not I.”

“Then I will give her your name,” Old Mathilde said. “For she should have more of her mother than just the color of her hair and eyes, and a memory she is too young to know how to hold.”

And so I was named Constanze, after my mother. And no sooner had this been decided, than my mother died. Old Mathilde sat beside the bed, her eyes seeing the two of us together even in the dark, until my mother’s lips turned pale, her arms grew cold, and the clouds outside the window parted to reveal a spangle of high night stars. Not once in all that time, so Old Mathilde has always claimed, did I so much as stir or cry.

When the slim and curving sickle of the moon had reached the top of the window, then begun its slide back down the sky, Old Mathilde got up from her chair and lifted me gently from my mother’s arms. She carried me downstairs to the great open fireplace in the kitchen. Holding me in the crook of one arm, she took the longest poker she could find and stirred up the coals.

Not even such a storm as had descended upon us that night could altogether put out the kitchen fire—the fire that is the heart of any house. Once the coals were glowing as they should, Old Mathilde wrapped me in a towel of red flannel, took the largest of our soup kettles down from its peg, tucked me inside it, and nestled the pot among the embers so that I might grow warm once more.

As she did, I began to cry for the very first time. And at this, as if the sound of my voice startled them back into existence, all the other fires throughout the great stone house came back to life. Flurries of sparks shot straight up every chimney, scattering into the air like red-hot fireflies.

In this way, I earned a second name that night, the one that people use and remember, in spite of the fact that the name Constanze is a perfectly fine one. Nobody has ever called me that, not even Old Mathilde. Instead, she calls me by the name I was given for the coals that kept me warm, for the fires I brought back to life with the sound of my own voice. 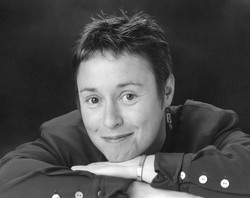 Cameron Dokey is the author of nearly thirty young adult novels. Her other fairy tales include, The Storyteller’s Daughter, Sunlight and Shadow, and Golden. She has also written the #1 bestselling How Not to Spend Your Senior Year. She lives in Seattle, Washington, with her husband and four cats.

By Cameron Dokey
PRICE MAY VARY BY RETAILER

SEE ALL
See more by Cameron Dokey
Thank you for signing up, fellow book lover!