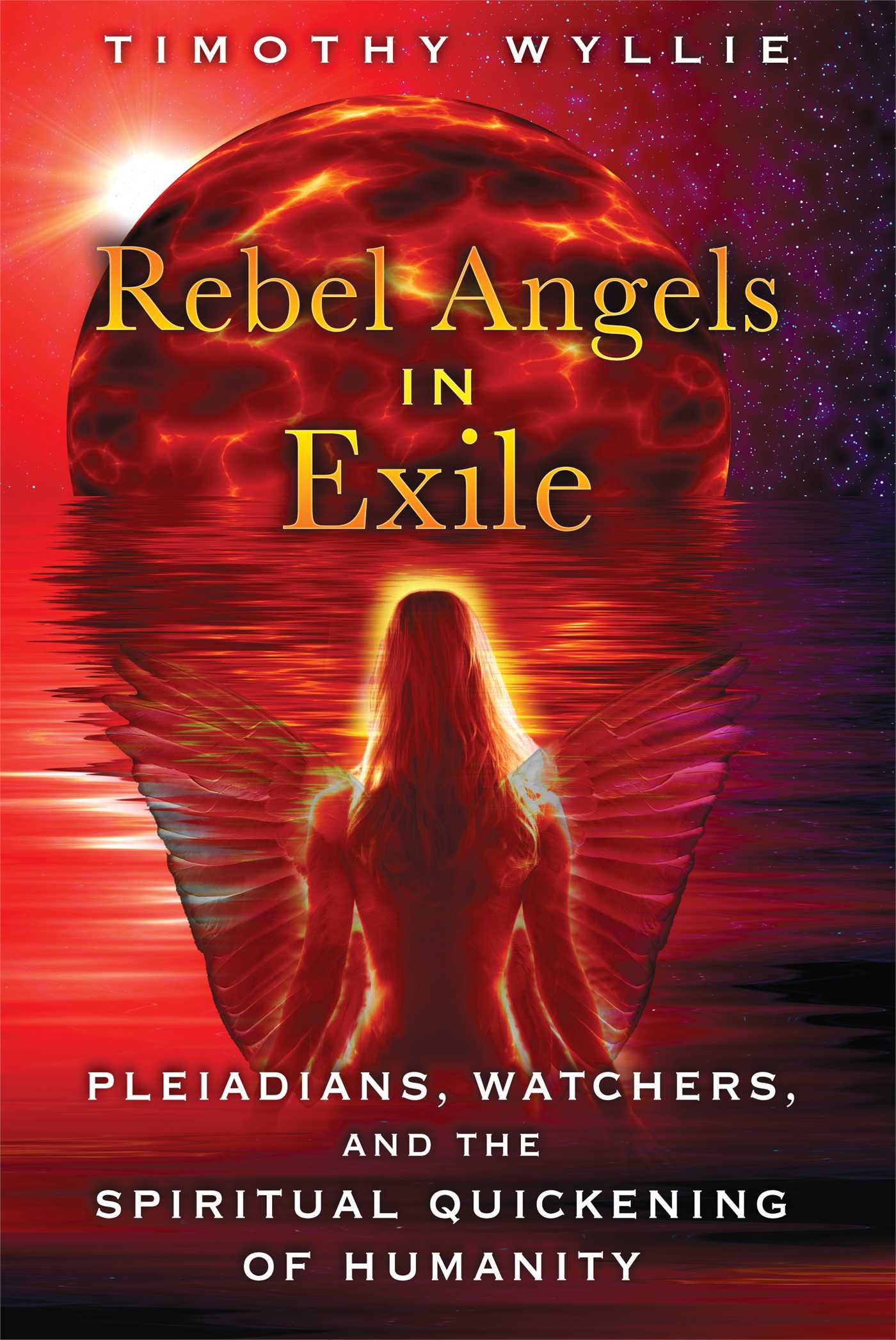 Pleiadians, Watchers, and the Spiritual Quickening of Humanity

A rebel angel’s revelations on the angelic quarantine after the Lucifer Rebellion 203,000 years ago

• Explores many mythic events in Earth’s ancient history, such as visits from the Nephilim and the Pleiadians and the growth and destruction of Lemuria

• Interwoven with angelic observations about Timothy Wyllie’s current and previous lives, such as his long involvement in the still controversial Process Church

After the angelic rebellion 203,000 years ago, Earth and 36 other planets were quarantined from the larger Multiverse. Despite aligning with Lucifer and the rebel angels, Georgia--an angel of Seraphic status--was permitted to remain on Earth and continue her role as a Watcher. In this book, Georgia, writing together with Timothy Wyllie, shares her personal account of half a million years on this planet.

Focusing this volume 38,000 years after the angelic rebellion, Georgia shares her experiences being present for key decisions taken by the rebel angel leadership, witnessing firsthand Earth’s steady descent into darkness, ignorance, and confusion. Georgia explores mythic events in Earth’s ancient history, such as visits from the Nephilim and the Pleiadians and the destruction of Lemuria, and reveals information about angelic influence, their ability to affect whales and dolphins, and the presence of illicit alien colonies in remote areas of Earth. Interweaving her own story with observations about Timothy Wyllie’s current and previous lives, such as his long involvement with the Process Church, she explores the supreme significance of the Earth as a world on which the rebel angels have been accorded the privilege of mortal incarnation and as an arena for accelerating spiritual growth.

Georgia shares her words, in part, to awaken some of the over 100 million rebel angels currently living out their human lives, most unaware of their angelic heritage and struggling with their sense of being so different from other people. She shows that a mortal incarnation for a rebel angel is an opportunity to personally redeem their past and help prepare the way for the imminent transformation of global consciousness as the Earth is welcomed back into the Multiverse.

Chapter 6
Lemurian Technology
Pleiadean Visitors, Christ and Satan, and a Warning from the Star People

The sunset meditations were over when Vanu and Amadon left the Temple and made their way toward the great central plaza. Word of the upcoming formal meeting with the Star People had got around, and other Lemurians were streaming into the square to behold this legendary event.

Beneath me I could see the platforms had filled up. A quiet buzz of anticipation rose from the crowd. Vanu and Amadon had almost reached the top platform when a unified gasp rippled up from the people as heads turned to watch a small silvery craft wafting down in a series of gentle loops out of the night sky.

As if supported by a great invisible hand, the craft settled down gingerly so as to hover beside the platform and a few feet above it. It bobbed gently on a cushion of electromagnetism for a few minutes before an opening manifested in its smooth side and a ramp unfurled, its end flopping down onto the platform’s edge. With an animal-like motion, the ramp seemed to shrug before straightening itself out and settling into place just as Vanu, with Amadon right behind him, stepped up onto the platform.

A sudden silence fell over the crowd as their two god-kings stood side by side, tall and magnificent, beloved of their people, waiting for the Star People to emerge. The columns of light were dimming around the perimeter of the plaza and were now being replaced by a gentle glow emanating from the craft.

The glow grew brighter, as if the craft itself was made of light. Out of this radiance stepped two humanoid forms, a male and a female. Their silvery one-piece suits reflected the light. They wore no helmets.

The female extraterrestrial stepped forward, and moments later Vanu separated from Amadon and moved forward to where he stood facing her. The silence was deafening. She appeared astonishingly small opposite Vanu’s tall, spare form, although she was probably a little over five feet tall. Her silver-blond hair was short and tucked into the back of her tunic. It framed a broad unlined face, which was recognizably human, with large blue eyes and a small narrow nose above a remarkably generous mouth.

It was only the quality of her skin that might have distinguished her from being obviously human. The skin on her face and hands was translucent without being transparent--that’s the only way I can describe it. She seemed to exude a gentle light.

Vanu and the extraterrestrial stood facing one another and spoke telepathically in silence, a slight smile of amusement flickering over the alien’s open face. Vanu’s face I couldn’t see, but I imagined he’d be overjoyed to see her. I watched the colors swirling with delight in his emotional and spiritual subtle bodies.

The meeting was not a long one, and I got the impression that the female extraterrestrial was rapidly losing her energy. Her smile was becoming more fixed, and I sensed she was starting to feel some pain. As the Prince’s staff discovered in their turn, the emotional density of a world such as this can be extremely disturbing for a more finely tuned and sensitive species.

Amadon stepped forward at that point and both he and Vanu bowed their heads to the woman. The female inclined her head slightly to Vanu and Amadon and then turned to the crowds and spread her arms out wide, delivering a blessing to the four directions in ringing telepathic tones that would have touched every mind on the Islands of Mu.

The extraterrestrial couple turned back to their craft, the ramp curled up behind them, and the opening in the side of the craft rearranged itself closed. The craft appeared to hang there, bobbing slightly, while its glow dimmed and different colors started whirling around its outside rim. Then, soundlessly, it took off straight upward.

It was sometime after the Star People left and the people of Mu had settled back into their regular lives when I chanced to overhear Vanu and Amadon discussing the extraterrestrial visit and what it might hold for the future.

“Why just now?” I heard Amadon asking. “After all that time, why did they come back now?”

There was a long pause before Vanu responded. I realized they hadn’t talked yet about the ETs. Since Amadon hadn’t been included in the telepathic interaction with the alien, he had taken the hint and refrained from pestering Vanu for more details.

“It is startling information, Amadon. You will understand if I’ve had to consider it closely in my mind before coming to rest with what to do about it.”

“Ever since you met with the Star People, Vanu,” Amadon finally stammered out, “you have drawn away from all of us.”

“I know, I know, Amadon. Have patience. When I tell you what I learned, you too will be silent.” I could hear the exhaustion in Vanu’s voice. “You asked why, after all that time away, would they come back now?” Another long pause followed while he must have been wondering how to share the news with Amadon. Then he leaned forward, speaking quietly.

“There are some terrible times ahead. It will seem like the world is ending; not once, nor twice, but three times. Our land will disappear, say the Star People; it will be swallowed up by the ocean.” He stopped on seeing Amadon’s happy smile freeze in shock.

“They said the world will end?” Amadon finally squeezed out, his voice rising in suppressed panic.

“No, no, not really the world. That’ll go on. No, they meant our world will end.”

“Our world . . . the islands, Lemuria. All we’ve built. Everything we’ve worked for. All this will disappear. That’s what the Star woman showed me. She said fire will come from the sky and tear our islands apart.”

“Timothy Wyllie’s multivolume narrative, of which Rebel Angels in Exile is part, is a masterpiece of writing. It is essential reading for any who would explore the cosmic dimension of mercy suggested in the parable of the prodigal son and the role of those often known as Starseeds in its manifestation upon this and many other worlds.”

“If it is true that the Urantia Revelation accurately depicts our prehistory, then this new volume--like the previous two in the series--is an astonishing revelation in its own right. The high drama and vivid characters he depicts riveted my attention from beginning to the end.”

– Byron Belitsos, coauthor of The Adventure of Being Human

“Timothy has done us all an important favor by sharing his well-developed, extensive, and carefully considered personal cosmology in his many books. Based in part on the Urantia framework, he has taken its concepts and made them relevant and accessible for us all. His personal stories illustrate esoteric concepts in remarkable ways. The power of the elegant artistry in his words is reflected in the memes he has created that have become part of our current culture. Timothy Wyllie is an important and underappreciated elder who has much to offer anyone who takes the time to read his works.”

– Scott Taylor, author of Souls of the Sea

Pleiadians, Watchers, and the Spiritual Quickening of Humanity