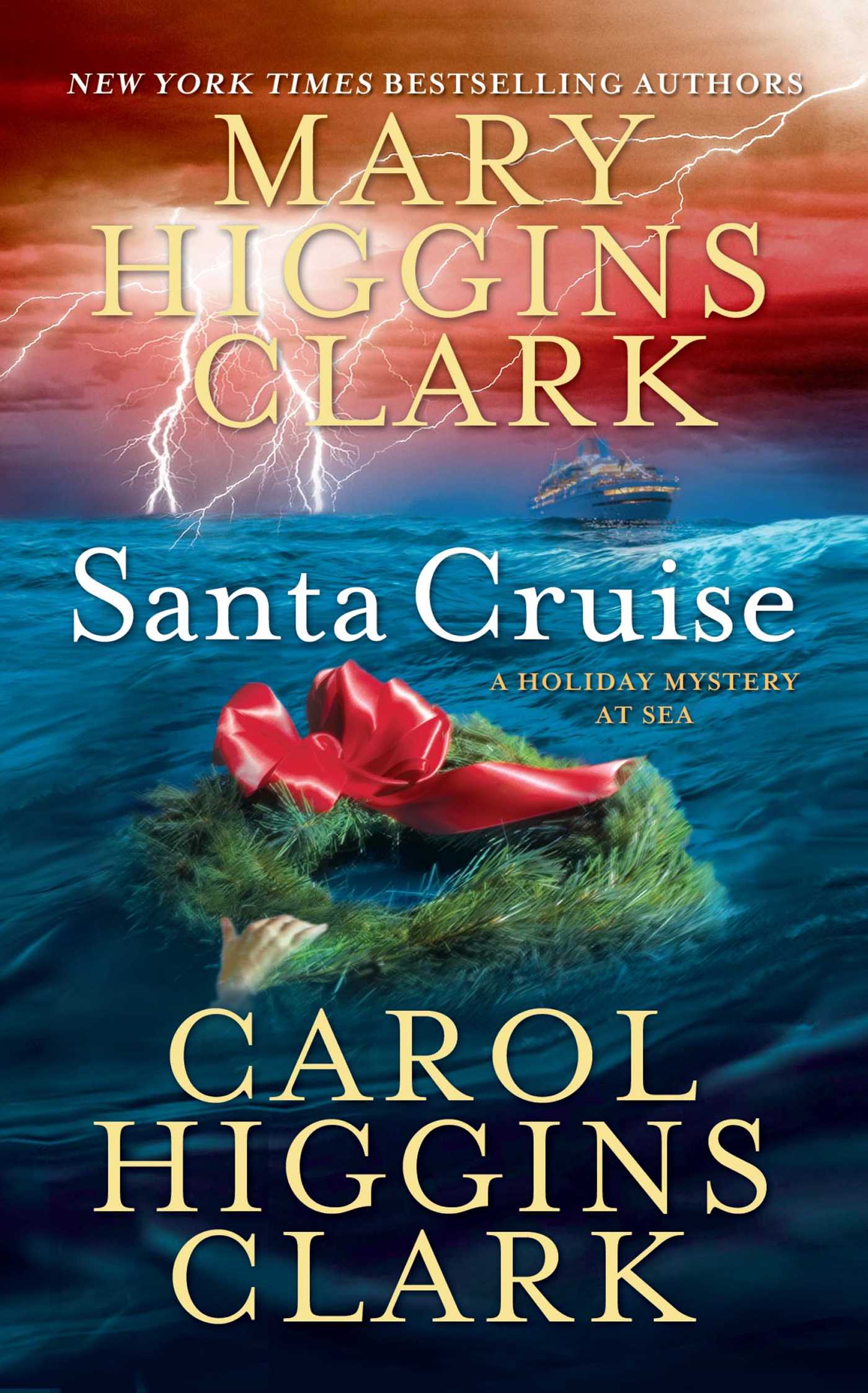 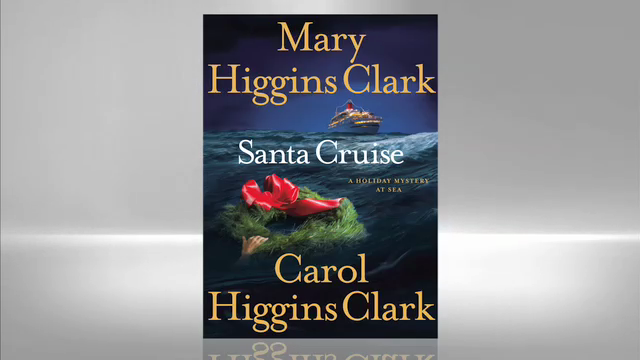 A Holiday Mystery at Sea

America’s Queen of Suspense—Mary Higgins Clark—joins forces with her daughter Carol—bestselling author of the Regan Reilly mysteries—in this fast-paced novel set on a special holiday cruise that sets sail from Miami the day after Christmas.

Alvirah Meehan, lottery winner turned amateur sleuth, and private investigator Regan Reilly are guests, along with their spouses, on the “Santa Cruise.” The cruise is a gift from Commodore Randolph Weed to a select group that “has made the world a better place.” His largesse is prompted by the desire to create a buzz about his new cruise ship, the Royal Mermaid, as she sets out on her maiden voyage.

Alvirah, Regan, and her new husband Jack—head of the NYPD Major Case Squad—are joined as guests on the cruise by a mystery fan convention, celebrating “a ghost of honor,” as well as ten men who donated time playing Santa Claus, now hoping for a restful post-season. That tranquility vanishes when two Santa suits disappear from a locked room, a storm develops, and an attempt is made on a passenger’s life. As the Royal Mermaid sails through troubled waters, Alvirah, Regan, and Jack uncover clues that lead them to dangerous criminals not on the original guest list…

Santa Cruise 1 Monday, December 19th
Randolph Weed, self-styled commodore, stood on the deck of his pride and joy, the Royal Mermaid, an old ship he had bought and paid a fortune to refurbish and on which he intended to spend the rest of his life playing host to both friends and paying guests. Docked in the Port of Miami, the ship was being readied for its maiden voyage, the “Santa Cruise,” a four-day trip in the Caribbean with one stop at Fishbowl Island.

Dudley Loomis, his forty-year-old PR man, who would also serve as cruise director, joined Randolph on the deck. He took a deep breath of the refreshing breeze blowing off the Atlantic Ocean and sighed happily. “Commodore, I have e-mailed all the major news organizations once again to let them know about this unique and wonderful maiden voyage. I began the release, ‘On December 26th, Santa is turning in his sleigh, giving Rudolph and the other reindeer some time off, and taking a cruise. It’s the Santa Cruise—Commodore Randolph Weed’s gift to a select group of people who have in their own unique way made the world a better place this past year.’ “

“I’ve always liked giving gifts,” the Commodore said, a smile on his weathered but still handsome sixty-three-year-old face. “But people didn’t always appreciate it. My three ex-wives never understood what a deep and caring man I am. For goodness’ sake, I gave my last wife my Google stock before it went public.”

“I don’t begrudge her the money. I’ve made and lost fortunes. Now I want to give back to others. As you know, this Santa Cruise was created to raise money for charity, and celebrate those who have given of themselves.”

“It was my idea,” Dudley reminded him.

“True. But the money to pay for this cruise is coming out of my pocket. I spent considerably more than I expected in order to make the Royal Mermaid the beautiful ship she has become. But she’s worth every penny.” He paused. “At least I hope she is.”

Dudley Loomis held his tongue. Everyone had warned the Commodore that he’d be better off having a new ship built than dumping a fortune into this old tub, but I do admit it cleaned up rather well, Dudley told himself. He had been cruise director on mammoth vessels where he had to worry about several thousand guests, many of whom he found intensely irritating. He would now deal with only four hundred passengers, most of whom would probably be happy to sit on deck and read instead of having entertainment shoved down their throats twenty-four hours a day. Dudley had come up with the idea of the Santa Cruise when reservations for passage on the Royal Mermaid were almost nil. He was a PR man right down to the rubber soles of his yachting shoes.

“We should have a free cruise the day after Christmas to get the kinks out of the ship before any paying passengers, or reviewers, come on board,” he had told his boss. “You’ll donate passage to charities and do-gooders. It’ll only be a few days, and in the long run it will pay for itself with the good publicity I’ll get for you. By the time our official maiden voyage rolls around on January 20th, we’ll be turning people away. You wait and see.”

The Commodore had needed a few minutes to think about it. “A totally free cruise?”

“Free!” Dudley had insisted. “Everything for free!”

The Commodore had winced. “The bar, too?”

“Everything! From soup to nuts!”

Eventually, the Commodore agreed. The special Santa Cruise would set sail in one week, the day after Christmas, and return to Miami four days later.

Now, as the two men walked along the freshly scrubbed deck, they went over the final details. “I’m still hoping for one of the television stations to at least attend the pre-sailing cocktail party on the deck,” Dudley said. “I’ve sent word to the ten Santa Clauses you are treating to get here early so they can try on the lightweight Santa Claus outfits that you had made for them. They should be ready to mingle with everyone at our evening cocktail party.

“It turned out to be a blessing in disguise when I had that fender bender with that Santa Claus from Tallahassee last month. While we were exchanging insurance papers, he got weepy and confided how exhausting it was to listen to children all day long, have pictures taken with them, and, worse yet, be sneezed on. By the time Christmas Day rolled around, he’d be exhausted and unemployed again. That’s when the light went on in my head to include ten Santas among the guests . . .”

“You’re always thinking,” the Commodore agreed. “I just hope we get enough paying passengers in the next few months to keep this ship afloat.”

“It’ll all be fine, Commodore,” Dudley said in his most cheery cruise-director voice.

“You said we hadn’t heard from all the people who won this trip at charity auctions. What’s the status on that?”

“Everyone is coming—we’re just waiting to hear from one passenger. She was by far the highest bidder at an auction for this cruise. I sent her a letter by FedEx, and as an enticement offered her the remaining two staterooms so she could bring friends. She’s a good person for us to have on board. She won forty million dollars in a lottery, appears on television regularly, and is a contributing columnist to a large newspaper.” He did not add that he had lost the name and address of this winner—who had attended his friend Cal Sweeney’s auction—and had just followed up on it. He almost fainted when he realized Alvirah Meehan was not only a celebrity, but a columnist.

“Splendid, Dudley, splendid. I wouldn’t mind winning the lottery myself! In fact, I may need to—”

They had not heard the Commodore’s nephew, Eric, come up behind them.

Sneaky as always, Dudley thought as he turned to greet the newcomer. I swear he could make his living as a mugger.

“Good morning, my boy,” the Commodore said heartily, beaming at his kinsman.

The warm smile on thirty-two-year-old Eric Manchester’s face was the expression he reserved for the Commodore and other important people, Dudley observed. With his perfect tan, sun-streaked hair, and muscled body, Eric had obviously divided his time between the beach and the gym. He was wearing a Tommy Bahama floral shirt, khaki shorts, and Docksiders. The sight of him made Dudley ill. He knew that when the passengers came on board Eric would be outfitted as an officer of the ship, although God knows what office he was supposed to hold.

How come I wasn’t born good-looking, with a rich uncle? Dudley wondered wistfully.

“I’ll let you two chat,” Dudley said, anxious to get away from the farce of watching Eric pretend he was of any use to the Commodore, the Royal Mermaid, or the upcoming Santa Cruise. Eric had wormed his way onto the payroll immediately after his uncle bought the ship.

The Commodore smiled at his sister’s son. “Don’t need a thing I don’t already have,” he said heartily. “Have fun at the party you went to last night?”

Eric thought of the wad of cash he’d been given at that party, the down payment on what would make the Santa Cruise a risky and dangerous trip—and profitable for him . . . “It was lots of fun, Uncle Randolph,” Eric said. “I was bragging to everyone about our upcoming Santa Cruise and how generous you are helping to raise money for charities. Everyone there wished they were coming with us.”

The Commodore slapped him on the back. “Good work, Eric. Get people interested in us. Get people to sign up for one of our voyages.”

I did, Eric thought, but you won’t know about them . . . He shivered slightly, yet he couldn’t help but smile at the irony.

Eric’s guests would be the only two paying passengers on the Santa Cruise.

A Holiday Mystery at Sea