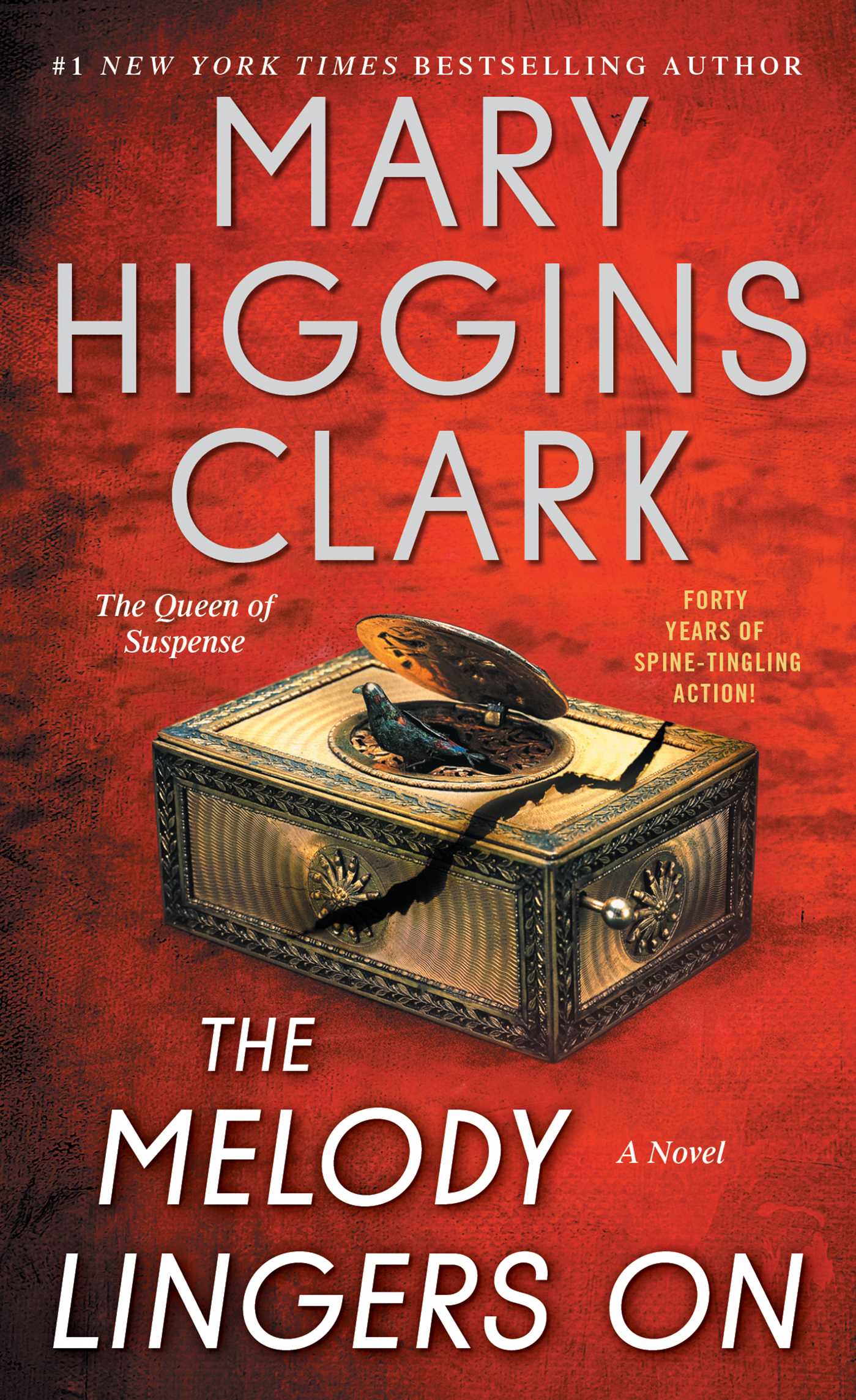 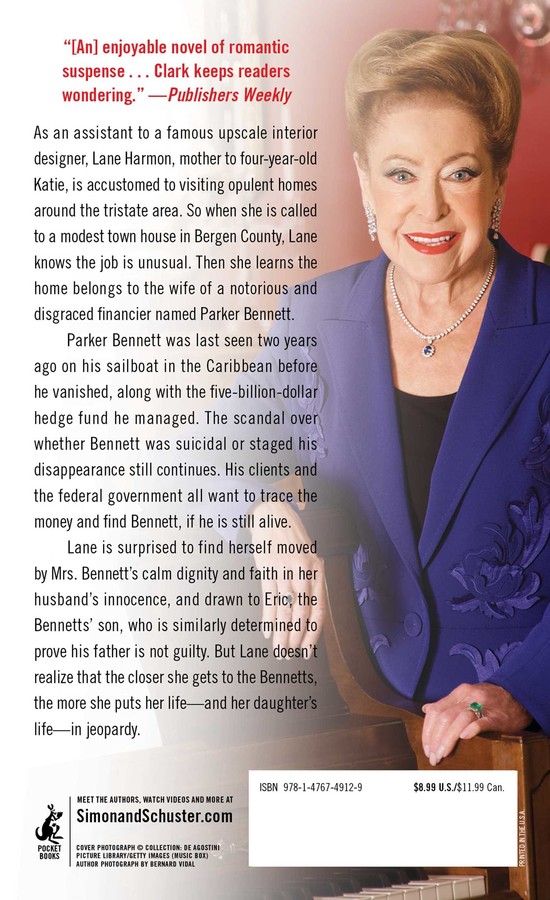 The Melody Lingers On

As the sole assistant to a famous upscale interior designer, Lane Harmon is accustomed to visiting opulent homes. So her latest job at a modest New Jersey townhouse is unusual. Then she learns the home belongs to the wife of disgraced finance magnate Parker Bennett, who vanished two years earlier, along with the five billion dollar hedge fund he managed.

The debate over whether Bennett was suicidal or staged his disappearance still continues. Both his clients and the federal government want to trace the money and find him. But Lane is surprisingly moved by Mrs. Bennett’s steadfast faith in her husband’s innocence. Gradually, Lane is also drawn to the Bennetts’ son, Mark, who is equally determined to prove his father is not guilty. What she doesn’t realize is the closer she gets to the notorious family, the more her life—and that of her five-year-old daughter—is in jeopardy.

The Melody Lingers On 1


Thirty-year-old Elaine Marsha Harmon walked briskly from her apartment on East Thirty-Second Street in Manhattan to her job as an assistant interior decorator fifteen blocks away in the Flatiron Building at Twenty-Third Street and Fifth Avenue in Manhattan. Her coat was warm but she had not worn gloves. There was a distinct chill this early November morning.

She had twisted her long auburn hair and fastened it at the back of her head. Now only wisps of it blew around her face. Tall, like her father, and slender, like her mother, she had realized after graduating from college that the life of a teacher was not the way for her to go. Instead, she enrolled in the Fashion Institute of Technology and after receiving a degree had been hired by Glady Harper, the doyenne of interior decorating among the wealthy and the socially ambitious.

Elaine always joked that she had been named after her paternal great-aunt, a childless widow who was considered extremely well-to-do. The problem was that Auntie Elaine Marsha, an animal lover, had left most of her money to various animal shelters and very little to her relatives.

As Lane explained it, “Elaine is a very nice name and so is Marsha, but I never felt like Elaine Marsha.” As a child she had unintentionally solved that problem by mispronouncing her name as “Lane,” and it had stuck.

For some reason she was thinking about that as she walked from Second Avenue to Fifth and then down to Twenty-Third Street. I feel good, she thought. I love being here, right now, at this moment, in this place. I love New York. I don’t think I could ever live anyplace else. At least I wouldn’t want to. But she probably would decide to move to the suburbs soon. Katie would start kindergarten next September, and the private schools in Manhattan were too pricey for her.

That reflection brought a familiar stab of pain. Oh, Ken, she thought. If only you had lived. Pushing back the memory, she opened the door of the Flatiron Building and took the elevator to the fourth floor.

Although it was only twenty of nine, Glady Harper was already there, as she had expected. The other employees, the receptionist and the bookkeeper, usually arrived by two minutes of nine. Glady did not forgive lateness.

Glady looked up. As usual her steel-gray hair looked as though she had not taken the trouble to brush it. Her wiry figure was clothed in a black sweater and slacks. Lane knew that Glady had a closet full of exactly the same outfits and that her passion for color and texture and design was reserved exclusively for the interiors of homes and offices. Sixty years old, divorced for twenty years, she was called “Glady” by her friends and employees. One of her fabric suppliers had joked “glad-she’s-not” would have been a more appropriate nickname, a remark that cost him a lucrative contract.

Glady did not waste time on greeting her. “Come in, Lane,” she said. “I want to talk something over with you.”

What did I do wrong? Lane asked herself as, following the command, she walked into the office and settled in one of the antique Windsor chairs in front of Glady’s desk.

“I’ve had a request from a new client, or maybe I should say an old client, and I’m not sure if I want to get involved.”

Lane raised her eyebrows. “Glady, you always say that if you sense a client is going to be difficult, the job isn’t worth it.” Not that you’re not difficult, she added silently. The first thing Glady did when she took on a client was to go through the home with a cart and ruthlessly get rid of any object she considered to be junk.

“This one is different,” Glady said, troubled. “Ten years ago, I did the interior design on a mansion in Greenwich when Parker Bennett bought it.”

“Parker Bennett!” Lane thought of the headlines about the fund manager who had cheated his clients out of billions of dollars. He had disappeared from his sailboat just before the theft was discovered. It was believed he had committed suicide, even though his body had never been found.

“Well, it’s not quite him I’m talking about,” Glady said. “The Bennetts’ son, Eric, called me. The government has clawed back every penny it can from whatever Parker Bennett had. Now the house is being sold. What’s left in there has no real value and they’re going to let Bennett’s wife, Anne, take out enough to furnish a condominium. Eric said his mother is absolutely indifferent to everything and he’d like me to do it for him.”

“Can he afford to pay you?”

“He was very up-front. He said he had read that the biggest commission I ever received was from his father’s ‘spare no expense’ instructions to me. He’s asking me to do it gratis.”

Lane hesitated, then decided not to be ambivalent. “I’ve seen pictures of that poor woman, Anne Bennett. She looks at least twenty years older than she did in the society columns before the fraud was discovered. If I were you, I’d do it.”

Harper pressed her lips together and looked up at the ceiling. It was a typical reaction when she was concentrating, whether it was over the exact shade of the fringe on a drapery or a decision like this. “I think you’re right,” she said. “And it certainly won’t take too long to put together enough furniture for a condominium. I understand that it’s in a town house development in Montclair, New Jersey. That’s not that far from the George Washington Bridge, maybe forty minutes in all. At least there won’t be too much travel time.”

She ripped off a page from the pad and pushed it across the desk to Lane. “Here is Eric Bennett’s phone number. I gather some small investment adviser gave him a behind-the-scenes job. He had been doing very well at Morgan Stanley, but he resigned after they found out what Daddy Dearest had been up to. Make an appointment with him.”

Lane carried the page to her own office, sat behind her desk, and began to dial the number on it. A firm, modulated voice answered on the first ring.

The Melody Lingers On