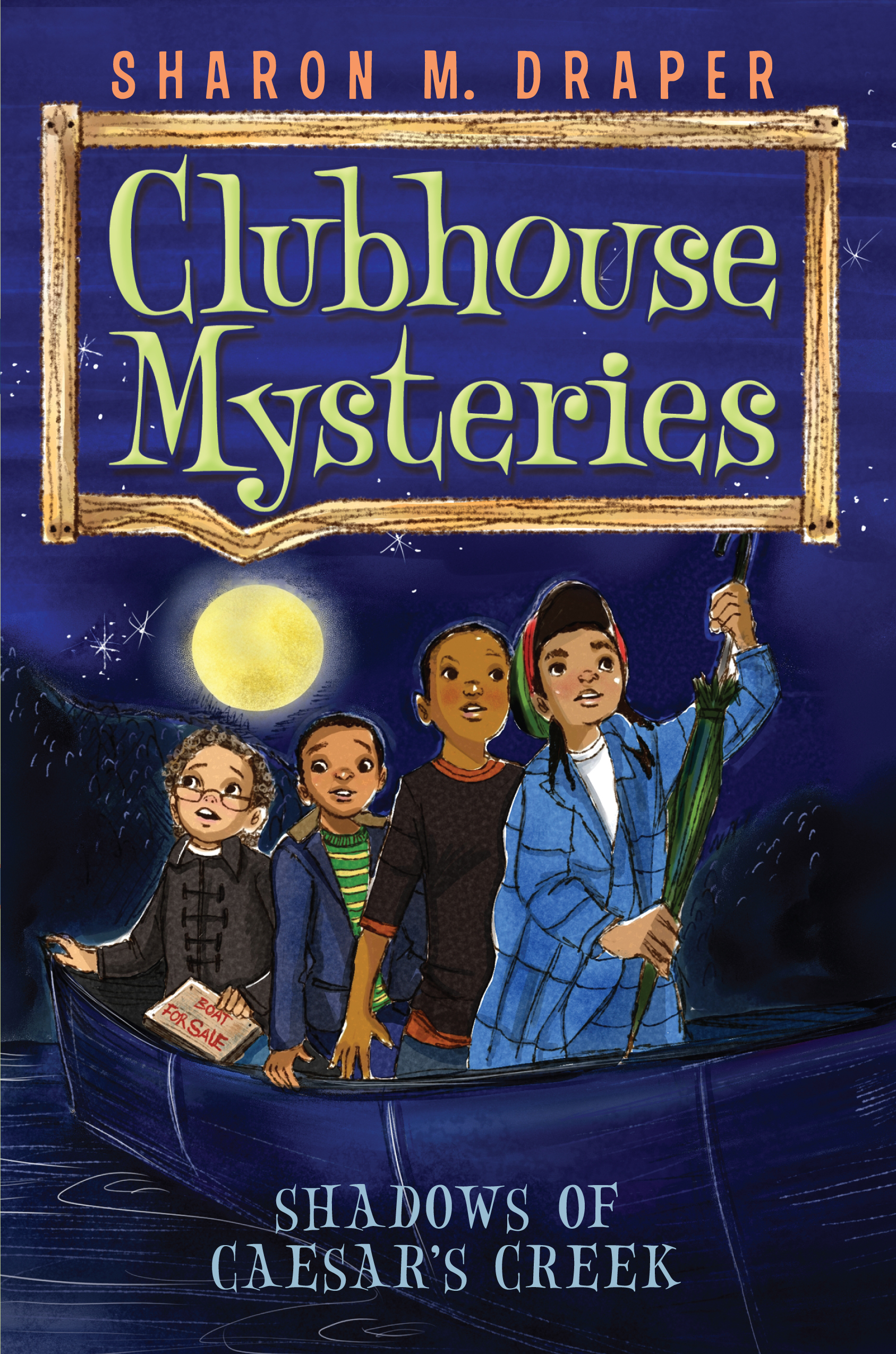 In this third book of the classic chapter book series by award-winning author Sharon M. Draper, four boys who call themselves the Black Dinosaurs go on a spooky camping trip filled with Native American lore.

Ziggy and friends are excited about their overnight camping trip to Caesar’s Creek State Park—named after a Shawnee chief. Their camp counselor is a descendant of Caesar and fills the campers’ imaginations with fun (and spooky!) stories about her ancestors and the Shawnee legends.

When Ziggy and the rest of the Clubhouse gang decide to test their courage like the Shawnee youth did, things don’t go quite as planned. And when they end up lost, strange things start to happen. Could it just be the animals roaming the woods? Or are the ancient spirits of Caesar back to haunt their old stomping grounds?

ZIGGY’S THOUGHTS BOUNCED LIKE HOT POPCORN as he ran through his backyard to the clubhouse of the Black Dinosaurs. An overnight camping trip he thought eagerly.Fishing Hiking Cooking over a campfire He couldn’t wait to talk to Rico, Rashawn, and Jerome, the other members of the Black Dinosaurs, about the letter from Camp Caesar.

Ziggy’s huge backyard was wonderful. It was a place where flowers, weeds, rabbits, and ten-year-old boys could grow wild. It was a place to dream and create—a perfect location for secrets and adventures. Ziggy followed a path, probably used by raccoons, which ran back through the thick underbrush to the clubhouse.

Using the remains of an old fence that the boys had found in Ziggy’s backyard, they had built the clubhouse themselves the previous summer. They had cut holes that looked a lot like windows in the two side walls, and for the door, they’d used a smaller section of the fence wall. It closed with a bent piece of wire coat hanger.

Inside, the clubhouse was about ten feet by twelve feet—not really big, but large enough for four boys to sit and talk. In it was one lawn chair with most of the webbing missing, one folding chair left over from a church picnic, one three-legged kitchen chair (they used a large rock to balance it), and a bicycle with two flat tires. This was their seating arrangement, or they could push everything aside and sit on the blanket that Ziggy’s mom had given them.

Just as Ziggy got to the front of the clubhouse, he tripped over his shoelace, lost his balance, landed on his backside, and rolled with a laugh to the door, where Jerome was waiting for him. Ziggy never walked anywhere—he bounced or jogged or galloped wherever he went. He was always in a good mood, always excited about whatever was happening around him. So Jerome was not surprised when Ziggy landed at his feet, bubbling with excitement.

He helped Ziggy up and asked with a laugh, “What’s up, Ziggy?”

“Did your letter come, mon? Are you packed? Where are Rico and Rashawn?” Ziggy’s eyes were bright. Behind him, the boys could hear the rustling of something in the bushes.

Rashawn’s Siberian husky, Afrika, with one blue eye and one brown eye, trotted out of the bushes, found his favorite spot under a tree, and went to sleep. Rashawn, tall, brown, and skinny, and wearing his favorite army boots, stomped through the backyard and sat down on a large rock in front of the clubhouse.

Ziggy was still hopping around enthusiastically. He wore a green vest, a blue shirt, and bright red jeans. Today a large knitted cap covered his braids, which usually bounced as much as he did. Ziggy’s family had come from Jamaica to Ohio several years before and had moved onto the street in Cincinnati where Rico, Rashawn, and Jerome lived.

The four boys had been friends since first grade.

Rico was coming down the path to the clubhouse. He had a huge wad of bubble gum in his mouth and was attempting to blow the world’s biggest bubble. He walked slowly, concentrating on blowing and balancing the bubble, which was almost the size of his face. He didn’t see Ziggy, who leaped into the air, bursting to tell his good news.

“It’s almost time” cried Ziggy. As Ziggy began to speak, he waved his arms around wildly. At that moment Rico and his bubble walked right into Ziggy’s hand. Splat went the bubble gum, and Rico’s surprised face and thick brown hair were instantly covered with sticky pink bubble gum.

Rashawn and Jerome hooted with laughter; Ziggy rolled on the ground with delight. Rico didn’t laugh much. But it was clear he wasn’t angry as he sat on the grass, picking gum out of his hair.

“That bubble would have gone in the Guinness Book of World Records,” he said, faking disappointment. “I bet it was the biggest one in the world so far”

“Aw, mon, I blow bubbles bigger than that every day” boasted Ziggy. “But you gotta mix the bubble gum with mashed potatoes first That’s the secret ingredient”

“Yuck” exclaimed the others. They were used to Ziggy’s unusual tastes in food. He stirred his chocolate milk with pickles and put mustard on his cornflakes.

“The mailman just left,” Ziggy told them, “and my letter from Camp Caesar came today We’ve been waiting forever, but the trip is finally here We’re going camping at Caesar’s Creek State Park next week”

“We got our letters today too,” Rico said. “It’s gonna be a cool trip.” He had almost finished pulling the bubble gum out of his hair.

Rashawn cheered. “Let’s hear it for my dad” Rashawn’s father was a member of the Black Heritage Club. They had decided several months ago to sponsor field trips for the young people of the community, and this camping trip was one of the first activities.

“I’ve never slept outside in the woods before,” admitted Jerome. “I wonder what we ought to take.”

Ziggy pulled a folded piece of paper from the back pocket of his red jeans. “Not to worry, mon” he announced. “Here’s the list of things to bring. Let’s see here … flashlight, sleeping bag, backpack, extra socks, bug spray …”

“Bug spray?” asked Jerome. He hated insects. He carried bug spray every day in his book bag, just in case. “You know how I am about bugs I’ll probably never get to sleep, looking for bugs in the night.”

Ziggy laughed and said again, “Not to worry, mon It will be so dark in those woods at night you’ll never even see the bugs that bite you”

Jerome picked up a handful of dry leaves and threw them at Ziggy. “Hey, you really know how to make a dude feel better, man”

“Who else is going?” asked Rico.

“I’m not sure,” Rashawn answered. “I think a few more kids from school. There might be some kids from other schools near the campsite, my dad said.”

“Who cares, mon” Ziggy replied. “I’m more concerned with the lions and tigers and bears”

“There are no lions and tigers in the woods here in Ohio,” Rico declared. “But I’m not sure about bears.”

“There’s no bears around here,” Jerome stated, “but I know the woods are full of bugs”

“Bug spray won’t do much against a bear” muttered Rashawn, who didn’t want to admit he was a little worried.

Ziggy checked the list again. “Not to worry, mon,” he announced again with cheerful assurance, “nothing on here about bears”

“That doesn’t mean there aren’t any,” Rashawn continued, smiling in spite of himself.

“What about Indians?” asked Rico.

“I don’t know,” Jerome said with a frown. “There used to be millions of Indians in Ohio—a long time ago.”

“What do you suppose happened to all of them?” Rico wondered.

“Hey, mon, I bet there are thousands of Indians living in the woods up there right now”

“No, Ziggy,” Rico said thoughtfully, “I think they got pushed out—from their own land. My dad told me that it used to be really beautiful around here before there were roads or bridges or even houses.”

“Can you imagine,” Rashawn thought out loud, “nothing but forests for miles and miles? The Indians had it so good”

“Yeah, except for one thing.” Jerome grinned.

“There was no place to stop for hamburgers and French fries”

At that, they all grabbed dry leaves and grass from the yard to throw at Ziggy, until he ran laughing and shouting through the backyard.

“Not to worry, mon” they heard him yell in the distance, still laughing. “I’ll bring my own”

Sharon M. Draper is a three-time New York Times bestselling author and a recipient of the Margaret A. Edwards Award honoring her significant and lasting contribution to writing for teens. She has received the Coretta Scott King Award for both Copper Sun and Forged by Fire, and was awarded the Charlotte Huck Award for Stella by Starlight. Her novel Out of My Mind has won multiple awards and was a New York Times bestseller for over three years, and Blended has also been a New York Times bestseller. She lives in Florida, where she taught high school English for twenty-five years and was named National Teacher of the Year. Visit her at SharonDraper.com.

Jesse Joshua Watson connects with people—where hammocking in Brazil, exploring Hong Kong, playing soccer in Haiti, or dodging taxis in Russia. He loves both the differences and similarities that are so colorfully displayed across our diverse world and reflects this passion in his illustrations, which have been featured in magazines, art publications, CD covers, children’s books, and on The Oprah Winfrey Show. His work appears in the New York Times bestselling Hank Zipzer series, the Clubhouse Mysteries (Ziggy and the Black Dinosaurs) series, Hope for Haiti, and more. He won the 2005 grand prize and was a 2006 finalist at the international SCBWI New York Showcase. Jesse lives with his wife and sons in Washington where he teaches art to kids, plays music occasionally and soccer religiously, and surfs the chilly northwest waters as often as he can. Visit him online at JesseWatson.com.