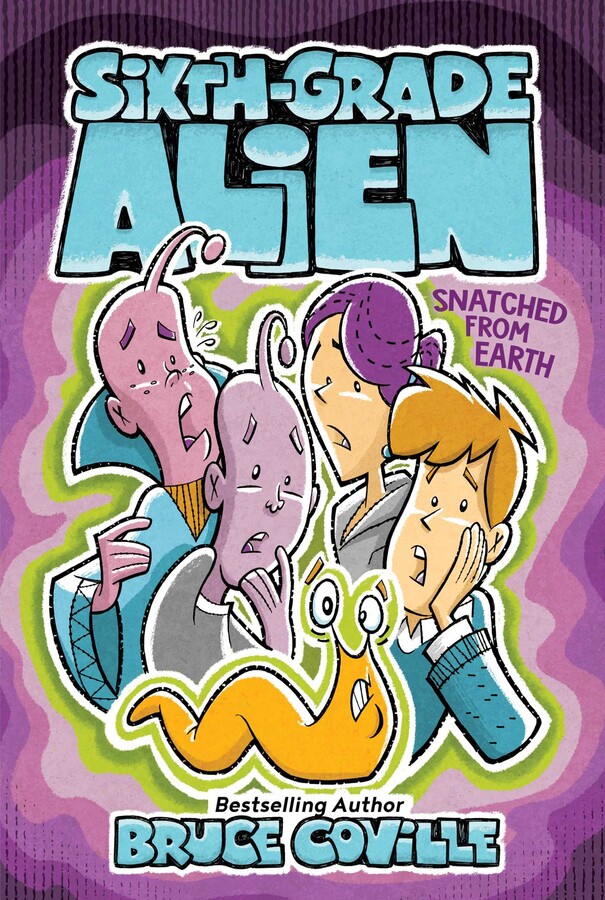 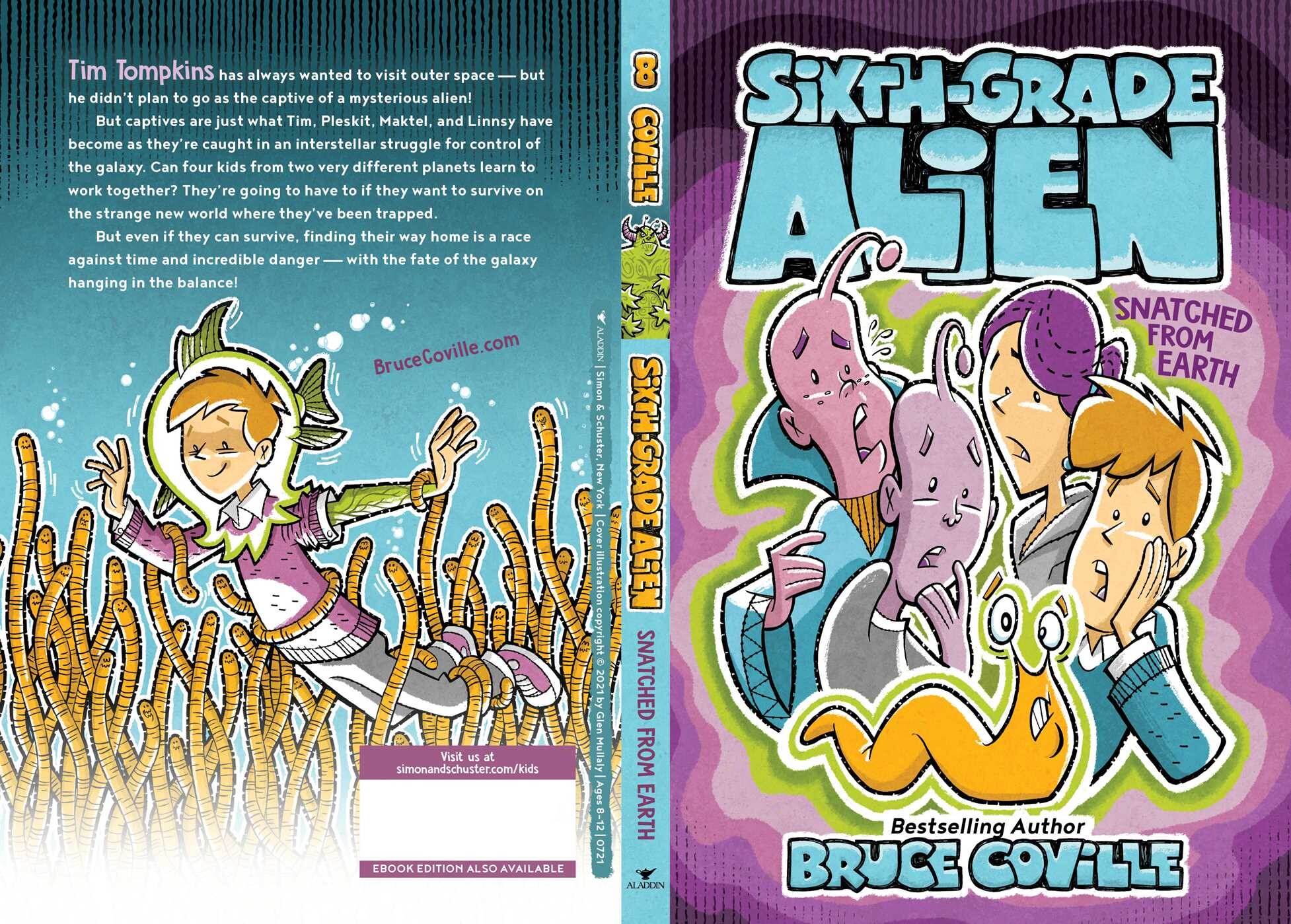 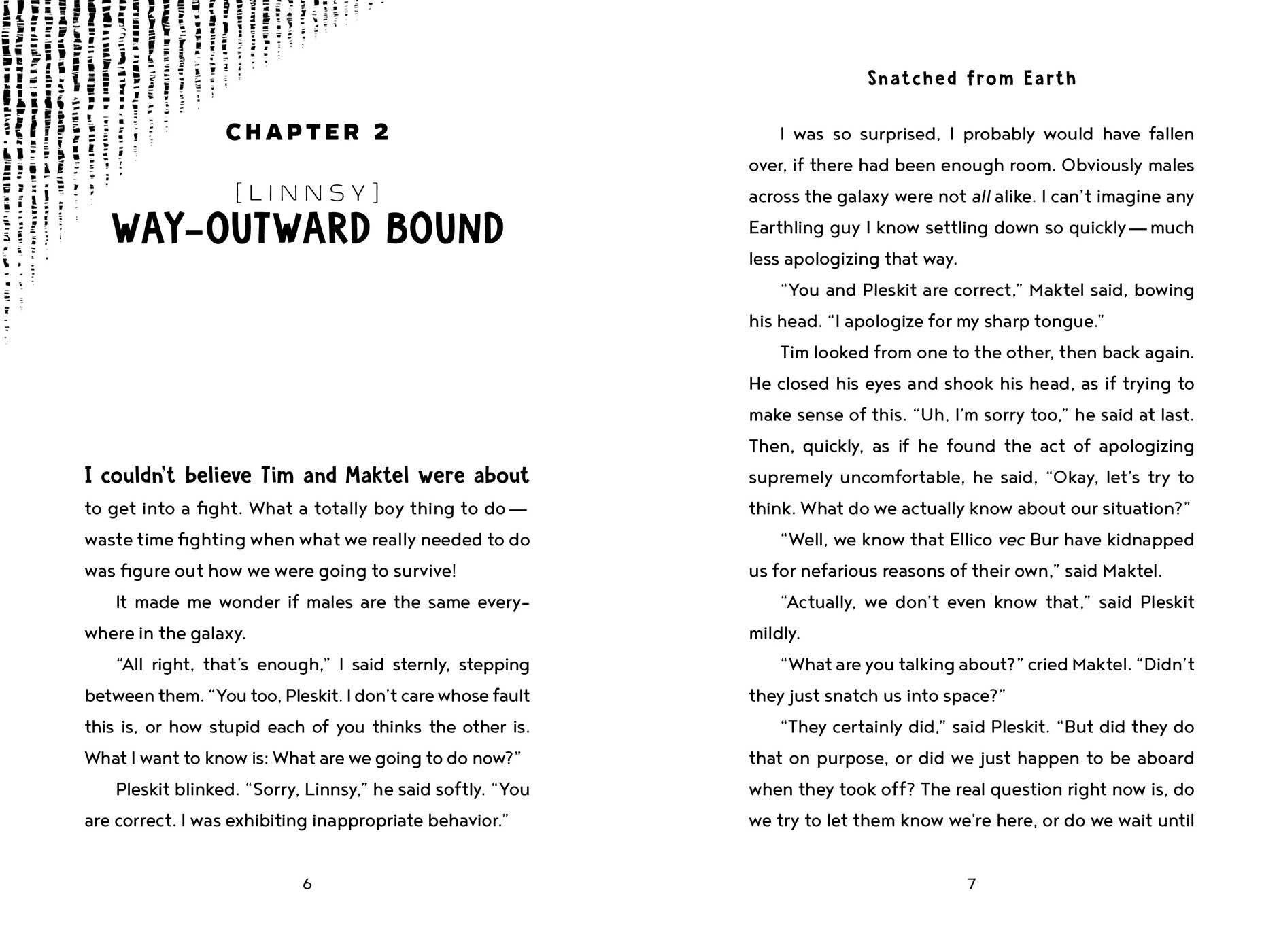 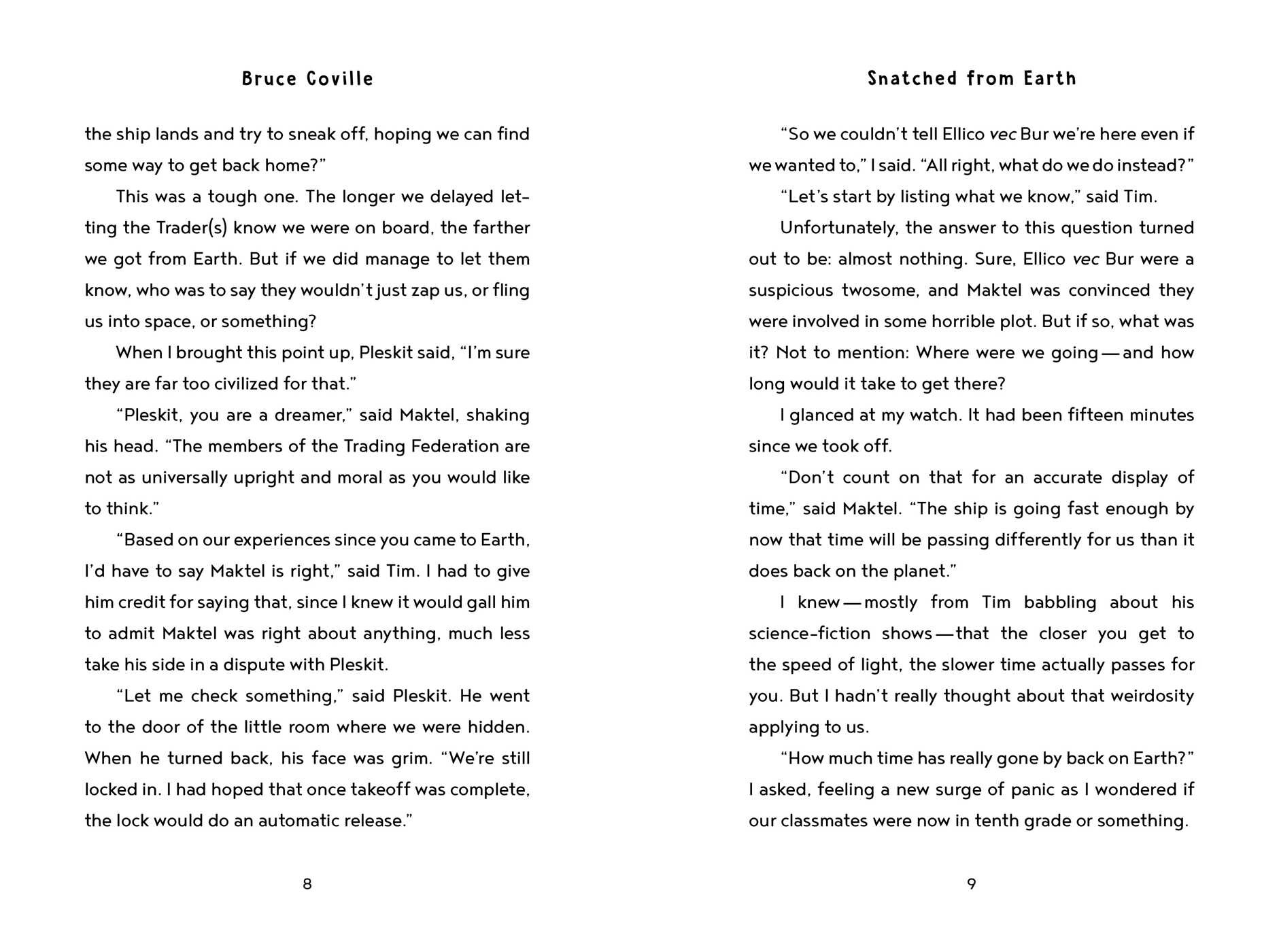 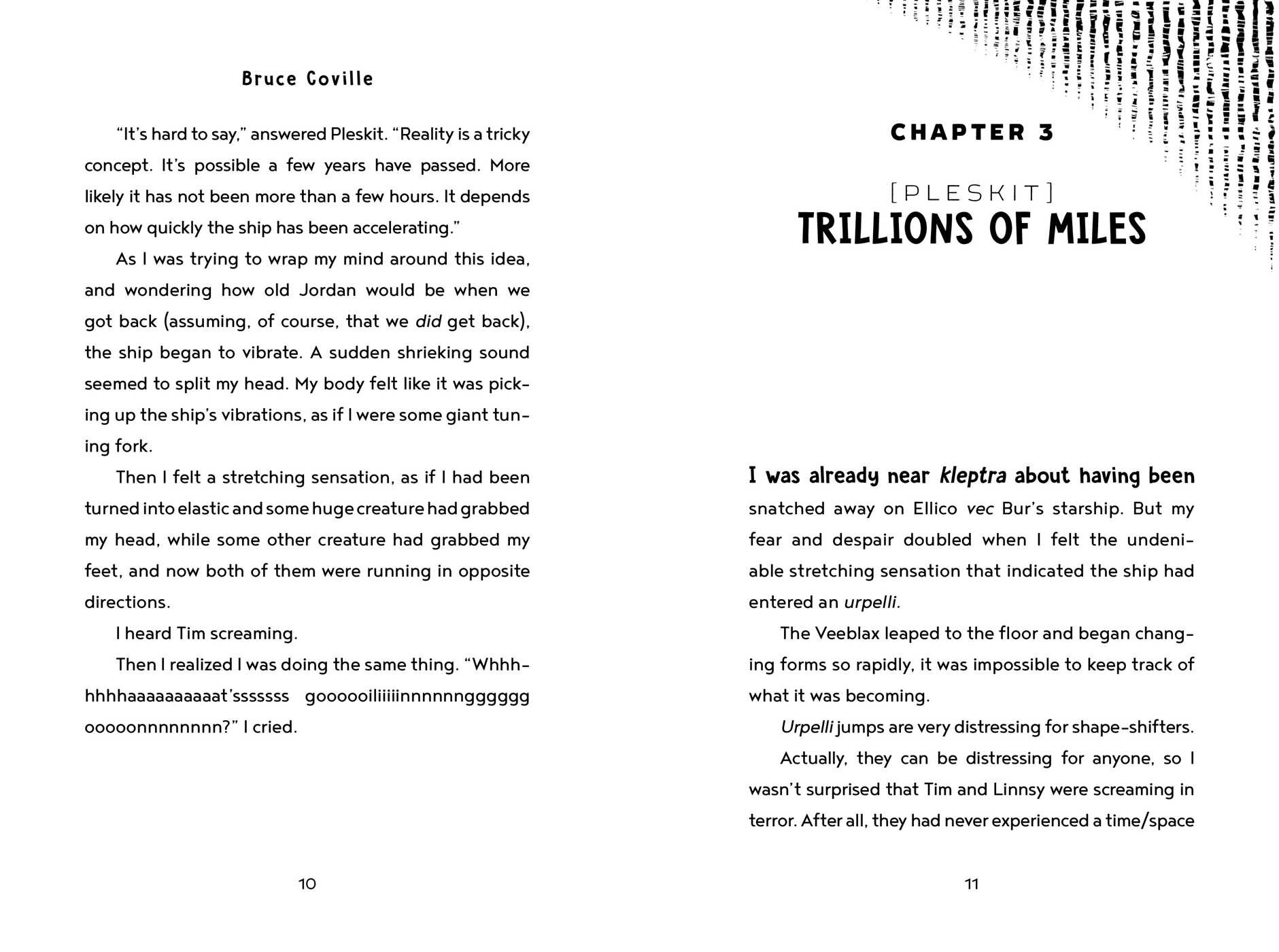 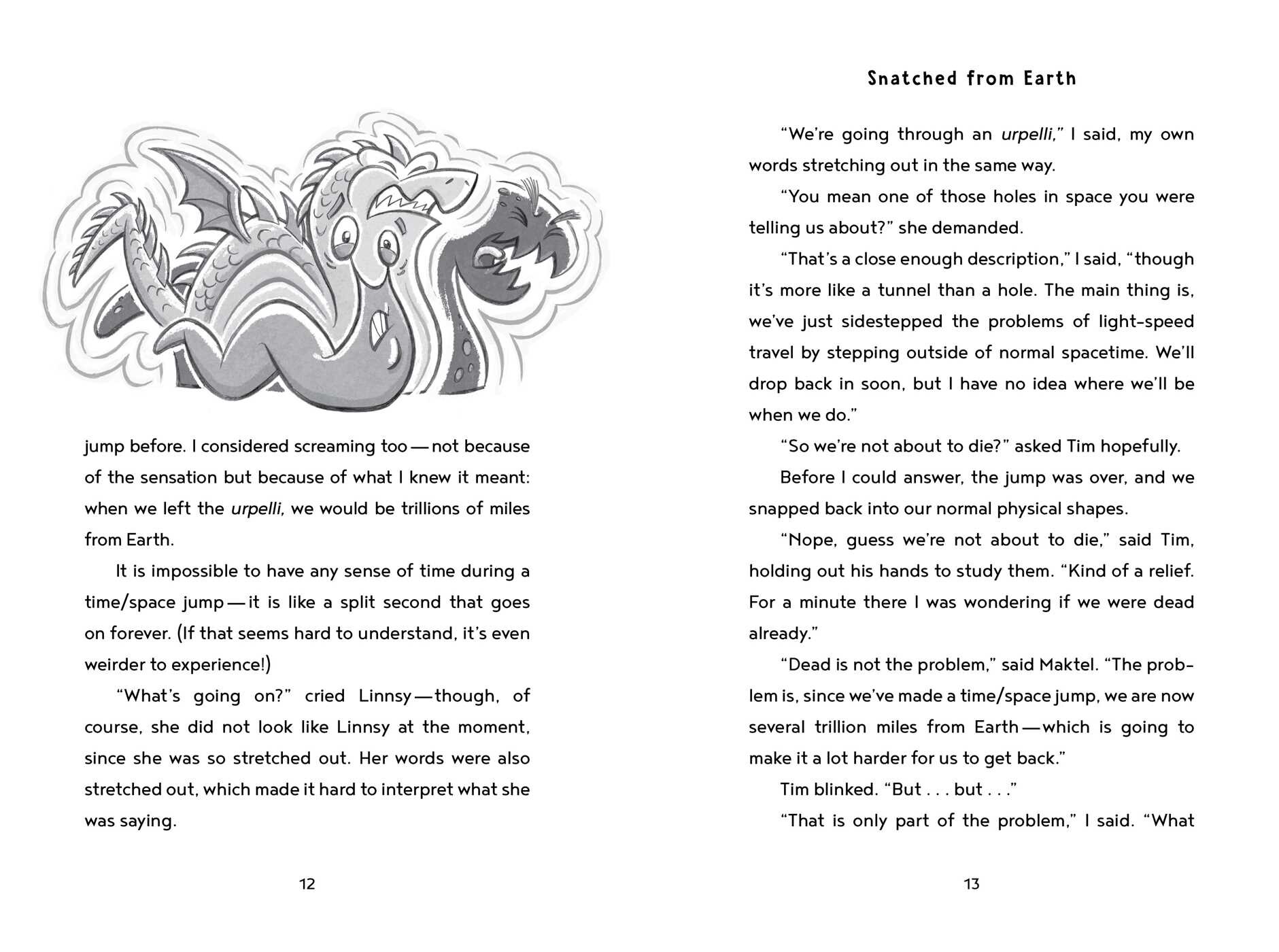 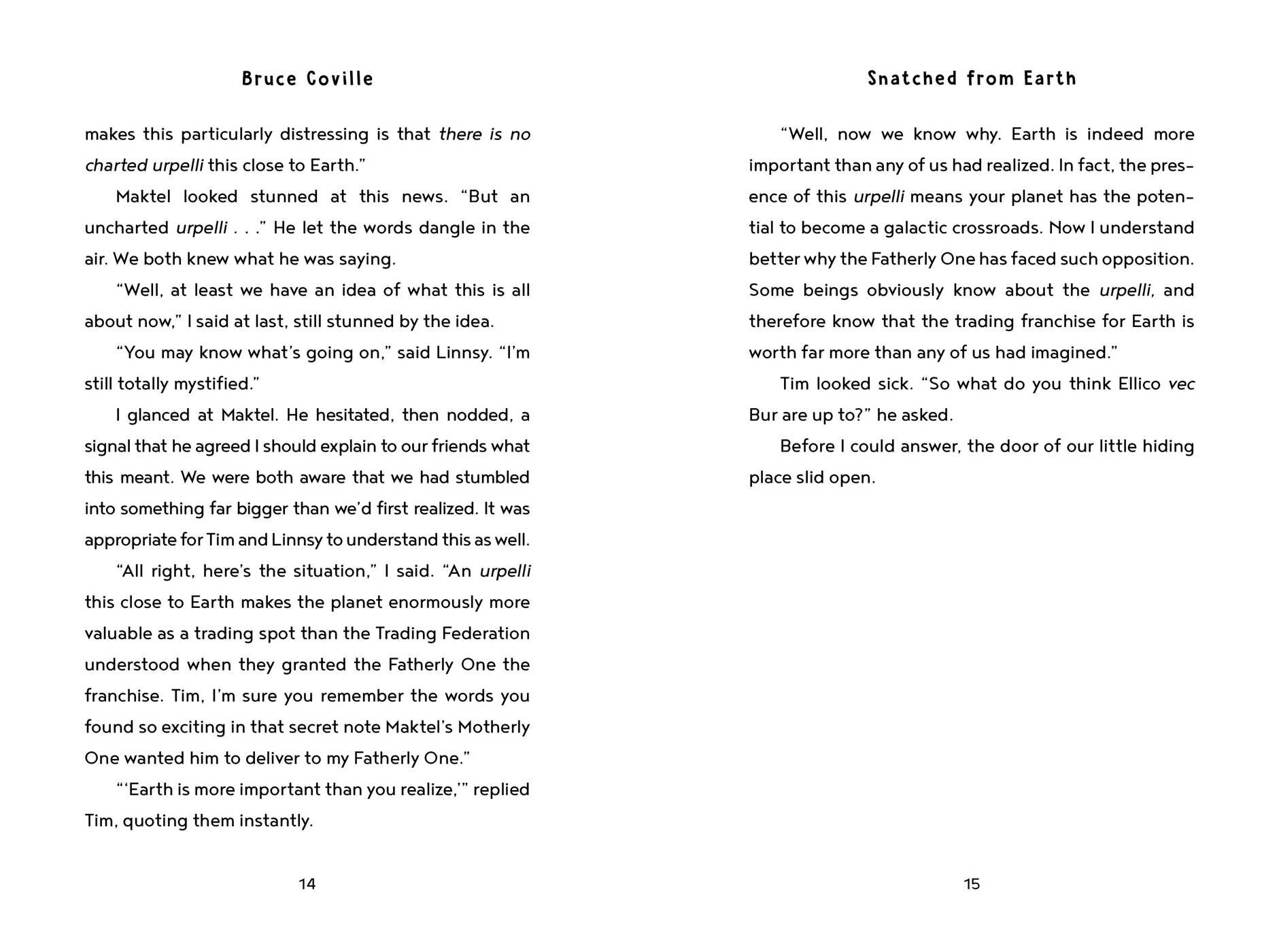 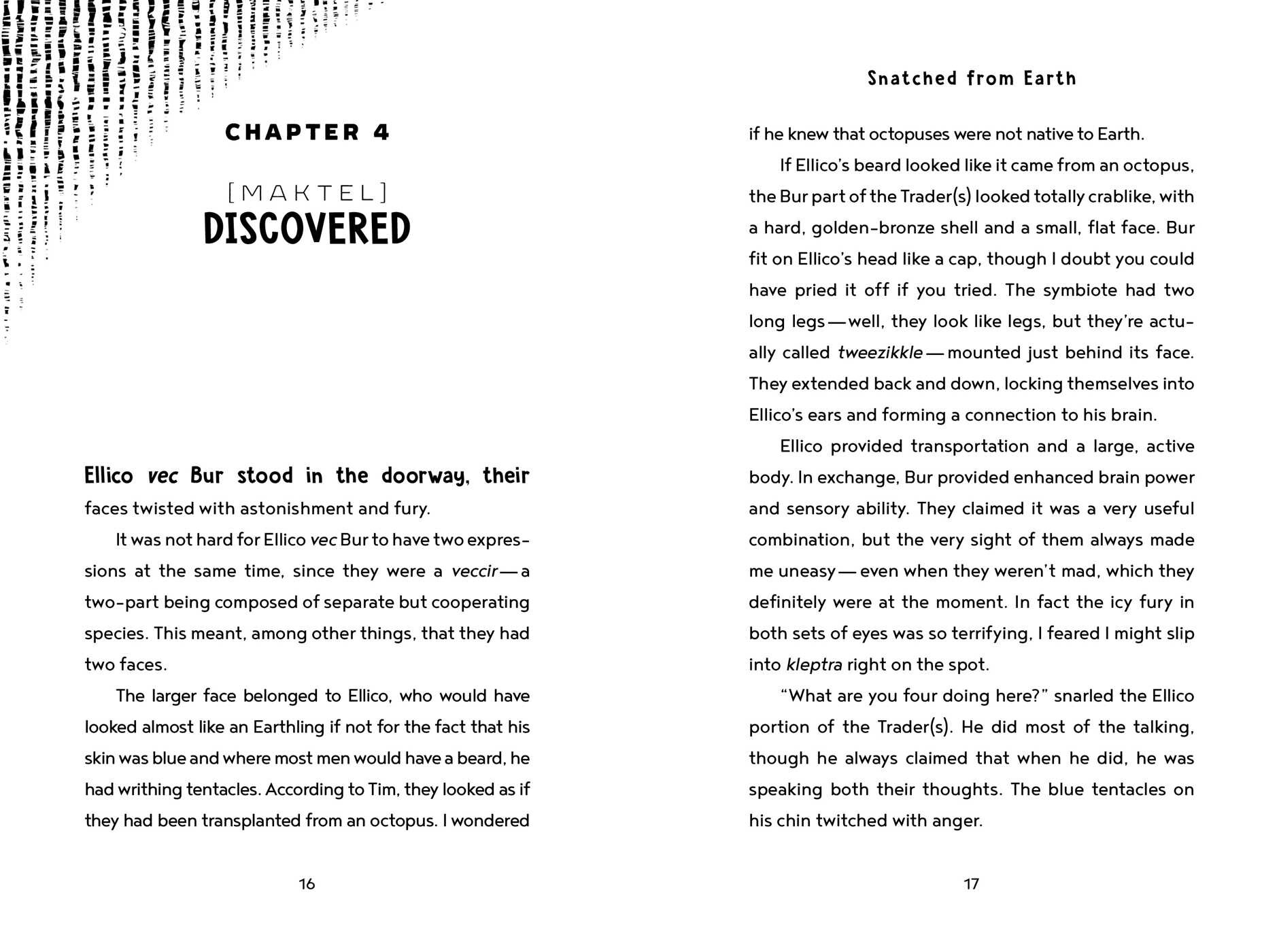 Tim and Pleskit are abducted in this eighth book in the hilarious, fast-paced, and accessible sci-fi series Sixth Grade Alien from the bestselling author of Aliens Ate My Homework and My Teacher Is an Alien, Bruce Coville.

Tim Tompkins has always wanted to visit outer space—though he didn’t plan to go as a captive of a mysterious alien!

But that’s just what Tim, Pleskit, Maktel, and Linnsy have become: captives in an interstellar struggle for control of the galaxy. Can four kids from two very different planets learn to work together? They’re going to have to if they want to survive on the strange new world where they’ve been trapped. But even if they can stay safe, how will the ever find their way back home?

Chapter 1: [Tim]: Stowaways CHAPTER 1 [TIM] STOWAWAYS
It’s late, and the others are asleep.

Judge Wingler’s assistant came in a while ago to pick up the material we had already written, all the chapters telling how we first got involved in what the galactic media are calling “The Earth-Based Catastrophe That Nearly Ended Life as We Know It.”

I would have liked more time to work on my chapters. I was completely honest about how upset I was when Pleskit’s friend Maktel came to Earth for a visit, but I’m afraid I didn’t sound very mature.

On the other hand, given what happened to Linnsy, maybe it’s just as well I’m not all that mature. If I were, I might be in her situation right now.

The weird thing is, sometimes I almost wish I were.

The pages we finished covered the first half of the story, beginning from the time Maktel arrived on Earth from Hevi-Hevi for a visit with Pleskit and started driving me nuts. The chapters talked about our suspicions regarding Ellico vec Bur, the strange two-part being who’d arrived on the same ship with Maktel to visit Pleskit’s Fatherly One, Meenom Ventrah. We got right up to the point where Pleskit, Maktel, Linnsy, and I sneaked onto Ellico vec Bur’s ship to see if we could find any clues to what the Trader(s) were up to.

I still remember the horror I felt when Ellico vec Bur came aboard. We quickly hid in a storage space, hoping the Trader(s) would leave before they found us.

They left all right, but not in the way we’d expected. They blasted off and left the planet—with the four of us still hiding on the ship! I have always wanted to go into space, but I never planned on making the trip by being snatched from Earth by someone(s) who seemed to be total villains.

I’m too wound up to sleep. I guess I might as well keep writing.

It was pitch black in the storage room until Pleskit’s sphen-gnut-ksher began to spark. Its purple light illuminated the terrified faces of my companions.

Linnsy was standing directly to my right. I felt bad that she had gotten dragged into this mess—though if I had a choice of who I’d want to have by my side when I was in trouble, she would be the one.

Next to her stood Pleskit himself, his pet Veeblax clinging to his shoulder. I could tell the little animal was as scared as I was, since it couldn’t choose a shape to settle in but kept shifting from one form to another.

Next to Pleskit was Maktel, his face wide-eyed in horror.

I wondered if I looked as frightened as he did. I sure felt that way.

“What are we going to do, guys?” whispered Linnsy.

I’ve known Linnsy since before kindergarten, so I could tell how hard she was working to keep the quaver out of her voice. Her nervousness increased the fear wringing my own gut. I realized it was possible we might never see Earth again.

Earth? Heck, I wasn’t sure we would live to see another day once Ellico vec Bur found out we were aboard.

“This is all your fault, Maktel,” said Pleskit bitterly. “If you hadn’t insisted on checking Ellico vec Bur’s ship, we would still be back at the embassy with the rest of the class, enjoying the party.”

“And if you had believed my suspicions to begin with, I would not have needed to insist on that checking,” replied Maktel, sounding equally bitter. “I did say those Trader(s) were up to something, didn’t I?”

“Actually, we still don’t know if they’re up to anything,” I pointed out.

“Stay out of this, Tim!” snapped Pleskit, which was so totally unlike him that I blinked and took a step back. I might have backed up more, but one step was as far as I could go in the tiny chamber we were trapped in.

Of course, in a way I had been feeling trapped ever since Maktel had arrived from Hevi-Hevi—trapped by the nagging fear in my gut that I would be left out of things when he and Pleskit got back together.

Well, I’d managed to keep myself included—and look where it had gotten me!

A sudden movement at my shoulder distracted me. I put a protective hand on the mesh pouch I wore there. Inside the pouch was a “purple pickle” that, with luck and proper care, might turn into a Veeblax like Pleskit’s. I suddenly wondered if the stress of blasting off would be bad for it.

“This won’t hurt the oog-slama, will it?” I asked nervously.

Maktel puffed out his cheeks in a Hevi-Hevian sign of exasperation. “By the Seven Moons of Skatwag!” he snapped. “We’ve got more to worry about than that stupid Veeblax in the making!”

“Will you shut up!” I hissed. I kept my voice low so that Ellico vec Bur wouldn’t hear us—then remembered that the Trader(s) couldn’t hear us anyway, since the room was soundproof.

Maktel looked at me angrily.

His sphen-gnut-ksher began to spark.

I pressed myself to the wall, wondering if he was about to zap me.

More books in this series: I Was A Sixth Grade Alien