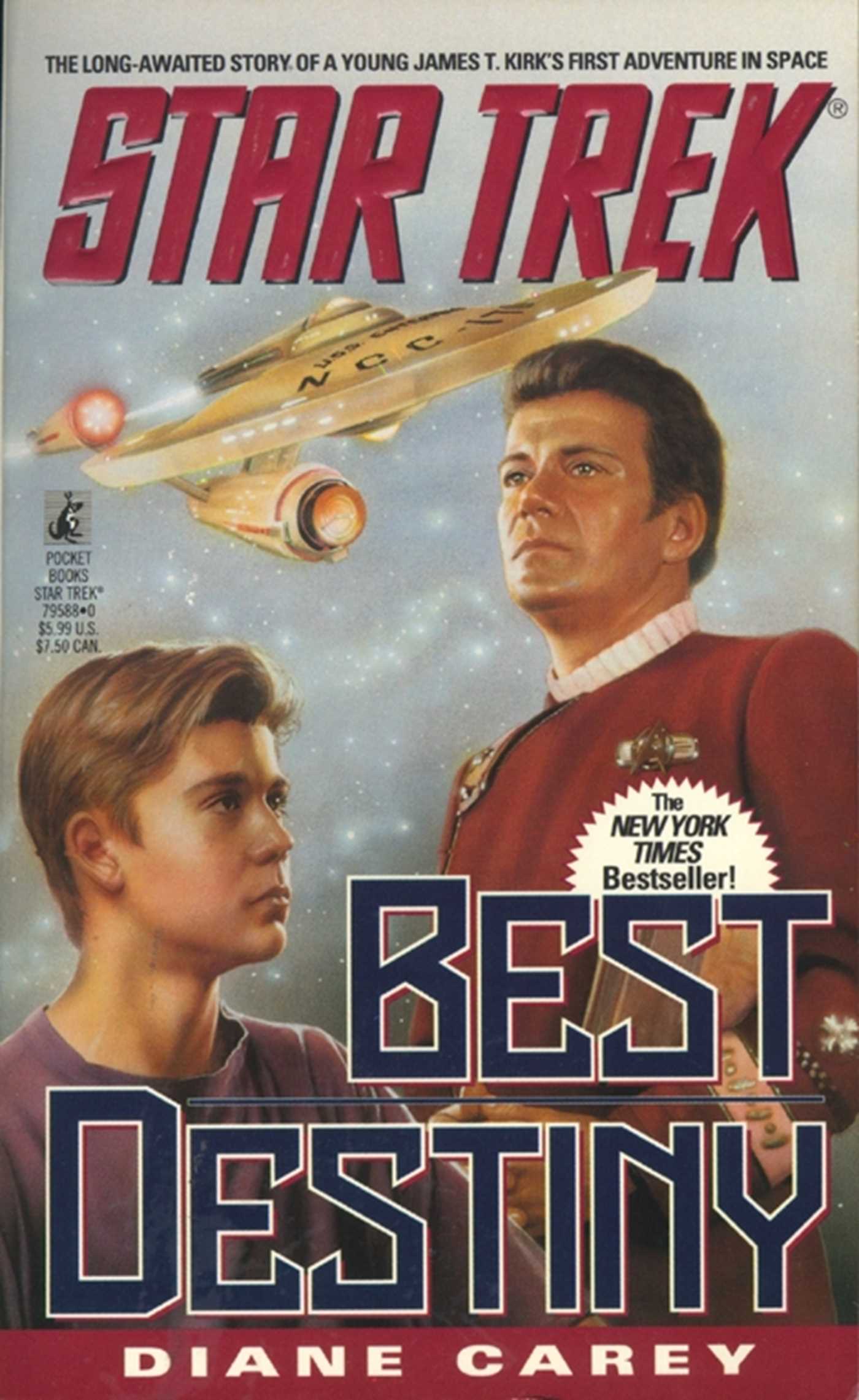 As James T. Kirk prepares to retire from a long and illustrious Starfleet career, events in a distant part of the Federation draw him back to a part of the galaxy he had last visited as a young man -- a mysterious world called Faramond whose name takes Kirk on a journey back to his youth.
At sixteen, Kirk is troubled, estranged from his father, and has a bleak future. However, a trip into space with Kirk's father George and Starfleet legend Captain Robert April changes James Kirk's life forever, when a simple voyage becomes a deadly trap. Soon Kirk and his father find themselves fighting for their lives against a vicious and powerful enemy.
Before the voyage ends, father and son will face life and death together, and James T. Kirk will get a glimpse of the future and his own Best Destiny...

Tension on the bridge could have been lifted and carried.

It would have cast the people into chaos, except for the anchor of the captain's voice. The captain on any ship was the only reason the crews could ever sleep or eat, for no one can sleep or eat where there isn't the anchor.

With that anchor on board, no storm was too bad, no fog too thick, no silence too damning.

Knowing the ship around them was screaming through space at warp nine, piercing through increasing waves of antiproton flush and heading not away from that horrifying fact of death but right into it, the crew clung to the captain's voice.

"Mr. Chekov, project our course and report what's there in a funnel of fifty light-years in diameter. Specify any outposts, Federation or otherwise, areas of contention, reported storms, and call up manifests of any shipping that has passed through that area in the past ten days."

"Aye, sir, projecting the course. I'll have that for you in a few moments."

On the quarterdeck, the ensign who had first noticed the flushback swallowed obvious guilt at having been the bearer of awful news. Wasn't her name Dimitrios? Demarris? De-something. McCoy knew that look, had carried it plenty of times himself.

With nothing to do -- yet -- in this emergency, he stepped away from the science station and over to the other side of the bridge to the young woman.

She was trying to get some moisture back into her mouth while she tracked the surging waves of flushback and tried to pinpoint their source. Not an exact science at all, if her expression wag any clue. Her hands were shaking.

The ensign blinked, glared at him, confused. Then she turned back to her screen and squinted into it.

She bit her lip, then only said, "Thank you, sir."

McCoy shifted his feet, watching the bridge personnel move tightly at their stations and the lights and panels of the bridge crackle with activity. A ship at warp nine was plenty active.

She wanted him to go away, and Leonard McCoy wasn't the go-away type.

She swallowed a couple more times, resisted the urge to glance at him and damn him for his doctor's intuition, but then she lowered her voice and let it out.

"If there's something out there that made an Excelsior-class ship blow up," the ensign said, "what chance do we have?"

McCoy offered the girl an annoyed glare, then swaggered a step closer to her, took her elbow, and turned her away from her console.

She gawked at him as if he were crazy.

The doctor didn't care that he was interrupting her work. Didn't care that she had been the one to tell everybody that a sister starship might have just been blown to bits. He was concerned about something else.

He nodded down toward the main deck, to the command chair, and to the man in it.

Ensign Devereaux looked down there too. Through his grip on her elbow, McCoy could feel some of her trembling go away as she watched James Kirk in his command chair.

There was just something about Captain Kirk.

The ensign cleared her throat, licked her lips, and turned back toward her station. Halfway there she paused, and gazed at Dr. McCoy. She was still afraid, but not in quite the same way.

At the navigation station on the upper deck, Commander Chekov straightened from his backbreaking hover and turned to look at the heart of the bridge also.

"Captain," the Russian said, speaking around his own accent as much as possible. "I have put up the merchant marine manifests on this screen for you to review. There are very few, sir. And there are no storms, no contested areas, no border disputes, no reported hazards in the specified funnel of space, no Starfleet outposts, no unfriendly settlements, and only two star systems within a hundred light-years. One is uninhabited, and on the other there is only a Federation archaeological excavation on a small outside planet."

Captain Kirk came up out of his chair. He had always had trouble sitting when there was action going on.

"Name the project," he ordered.

"I have never heard of it before, sir," came the clipped answer. "It is logged as...Faramond."

If McCoy was any judge of people he knew and people he didn't know, no one else on board had heard of that place either. One glance around the bridge told him that.

But then he looked down again at the captain.

On the face of the man he knew so well, McCoy saw a glitter of dangerous recognition.

The captain turned like a policeman about to make an arrest. He paced behind his command chair, caressing it. He glared forward into the rage of warp nine as stars and space debris blistered past the main viewscreen. His brows drew together and his eyes narrowed. A fire came into them which his friends thought talk of retirement might already have killed.

Though he watched the screen before him, he was gazing into the past. His lips parted and he spoke, but not to anyone there.