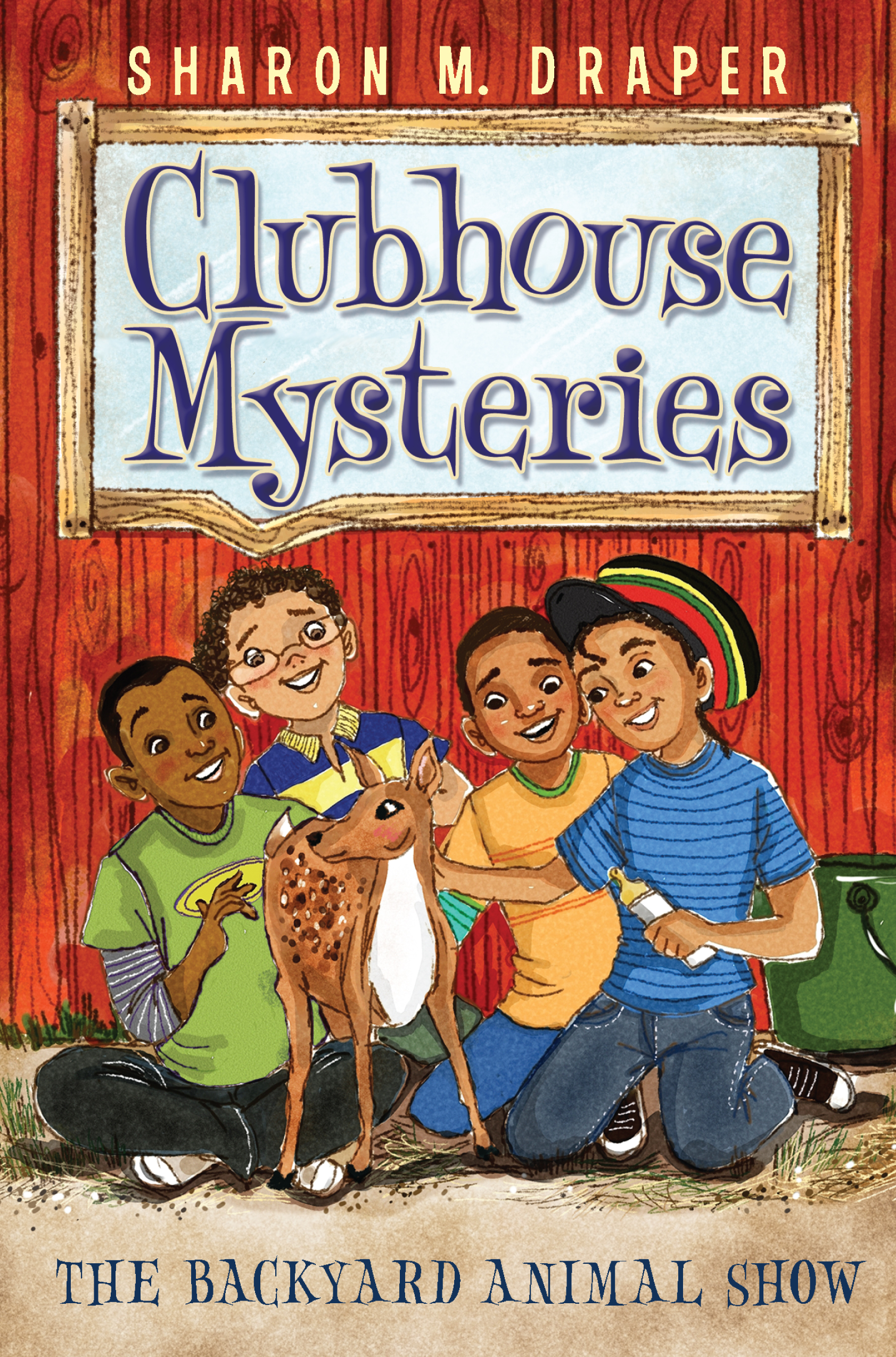 In this fifth book of the classic chapter book series by award-winning author Sharon M. Draper, four boys who call themselves the Black Dinosaurs get up close and personal with the pets of the neighborhood.

After witnessing a tragic accident in which a doe is killed, the boys in the Clubhouse Mysteries gang are able to rescue her orphaned fawn. But they realize that nearby construction means the destruction of more local animals’ homes, so Ziggy, Rashawn, Jerome, and Rico decide to take up the cause and host a backyard animal show to raise money for the local wildlife rescue center.

Dino, the adorable rescued fawn, will be the star attraction. And given that the boys have already tackled caring for a deer, managing their friends’ dogs, cats, and hamsters should be easy…right?

The Backyard Animal Show
ZIGGY AWAKENED TO A BRIGHT SPRING SATURDAY MORNING. The sunshine sparkled through his open bedroom window, and the roaring and groaning sounds of heavy trucks erased any songs a bird might be attempting to sing. Ziggy jumped out of bed, pulled the curtain aside, and looked to see what was making that powerful, compelling noise.

“The construction has started!” Ziggy whispered excitedly. “And we’ve got two whole weeks of spring break to watch the builders. I’ve got to tell Rico, Rashawn, and Jerome.” He dressed quickly, ran down the stairs, and gobbled a quick breakfast of honey-covered green beans and a glass of apple-prune juice. Ziggy, never one to eat a traditional meal, believed breakfast, and every other meal as well, should be an adventure. He grabbed a handful of walnuts from a jar, stuffed them into his jeans pocket, and waved good-bye to his mother, who was fixing herself a cup of tea.

“You boys be careful at that construction site!” she warned. “You stay behind that fence and watch from a distance, you hear me, son?”

“Yes, Mum,” Ziggy said obediently as he put on his jacket. “We won’t get in the way—promise.”

Ziggy’s mom looked unconvinced, but she waved him on, reminding him to be home in a couple of hours. Just in case she might think of any other warnings to add to the list of things mothers worry about, Ziggy hurried out the door and down the street to his friend Rico’s house. Rico was just coming out of his front door.

“Did you hear them? This is gonna be awesome, mon!” Ziggy told his friend. “It may take all summer for that apartment complex to be built. Just think of all the trucks and heavy equipment they’ll need!”

“Yeah, I can’t wait to check out all the bulldozers and stuff, but I sorta hate to see that little piece of land get all torn up.”

“What do you mean, mon?” Ziggy asked.

“Well, that area down the street has been woods for as long as I’ve lived here—there’s lots of trees, and squirrels who live in those trees, and birds, and probably bugs, too. Where will they move to now that the diggers are tearing up the place where they live?”

“I never thought about it that way, mon,” Ziggy replied thoughtfully.

Just then Rashawn and Jerome, the other two members of the Black Dinosaurs Club, joined Ziggy and Rico on the sidewalk. Rashawn was followed by his Siberian husky, a retired police dog named Afrika. Rashawn, the tallest of the four, wore a bright red, thick fleece, button-down sweatshirt with the picture of a basketball player on the front.

The Black Dinosaurs was the name of the club Ziggy, Rashawn, Rico, and Jerome had started one summer vacation. They had built a clubhouse in Ziggy’s backyard, and they met on Saturdays during the school year, sometimes just to goof off and eat pizza, and sometimes to try to solve neighborhood mysteries.

“Excavators and cranes!” Jerome added. “Let’s hurry up and get down there before they finish.”

“It will be weeks before they finish this project—maybe months, my dad said,” Rashawn explained.

The four friends ran down the street to the construction site. The area was barricaded with metal fencing and yellow tape, but that didn’t bother the boys. They found a spot on a nearby hill across the street from the site and settled in to watch as the motors of the heavy earthmoving equipment roared and rumbled as they worked.

“It sounds like dinosaurs growling at each other, mon,” Ziggy observed. “Vroom! Vroom!”

“That big earthmover is the T. rex!” Jerome continued. “Ready to gobble the dirt demons.”

“Don’t mess with my story, man,” Jerome said. “I’m getting ready to have the crane battle the dump truck!”

“Dump truck wins!” Rashawn said gleefully as he scratched his dog under its chin. “That’s the triceratops.”

“No way!” Jerome said. “The crane can pick up the dump truck and fling it across the construction zone. Crane wins, for sure.” He had brought a bag of potato chips and the boys passed the bag around, chewing, observing, and dreaming of truck monsters.

“They really do look like beasts, don’t they, mon?” Ziggy said in quiet appreciation of the snorting machines across the street.

The huge yellow backhoe looked almost graceful as it scooped dirt from an increasingly large hole. Its long neck dipped, scraped, and pulled huge clods of earth, pebbles and branches dangling from its claw teeth like the remains of a meal. It turned, swiveled, and spit the rocky clumps into the back of the dump trucks, which then ambled away like overburdened elephants.

“The man inside the cabin who’s operating the controls looks like one of those toy men we used to play with,” Rashawn observed.

“Look at the treads on those rollers, man,” Jerome said. “I bet that thing can roll over and stomp a whole army of toy builders.”

“You think they run on diesel fuel?” Rico asked.

“For sure, mon,” Ziggy replied. “Big rigs need heavy-duty food—just like I do. For dinner my mum is making sirloin steak covered with bananas! Yummy.”

“Yuck,” said Rashawn, who did not eat meat. “Just give me a big bowl of chili instead.”

“Whoa! Look at that! The crane is lifting that tree like it’s a toothpick!” Jerome pointed out with excitement.

“Where will they take the tree?” Rico asked.

“I don’t know, mon,” Ziggy answered. “Maybe they’ll make a chair out of it. Or a house for someone to live in. Or maybe just a pile of wooden toothpicks.” He sighed.

“The trees were home to lots of creatures,” Rico continued glumly. “The birds and the snakes and the raccoons and the deer that lived in those bushes and woods were happy living there. Now it’s all just dirt so people can build apartments. It doesn’t seem fair to me.”

“The animals will find another place to live, Rico,” Jerome said, trying to sound reassuring.

“Where?” Rico asked. “My mother told me they’re building another new housing project a few blocks away. Pretty soon there won’t be any place left for the creatures.”

The boys turned their attention to the street in front of them as they heard the harsh screeching of truck brakes, followed by a soft thud. The dirty yellow dump truck, full of rocks and debris from the work zone, had been rumbling slowly down the street when it stopped suddenly. The boys watched as the driver jumped out of the cab and ran to the side of the road.

Sharon M. Draper is a three-time New York Times bestselling author and a recipient of the Margaret A. Edwards Award honoring her significant and lasting contribution to writing for teens. She has received the Coretta Scott King Award for both Copper Sun and Forged by Fire, and was awarded the Charlotte Huck Award for Stella by Starlight. Her novel Out of My Mind has won multiple awards and was a New York Times bestseller for over three years, and Blended has also been a New York Times bestseller. She taught high school English for twenty-five years and was named National Teacher of the Year. She now lives in Florida. Visit her at SharonDraper.com.

Jesse Joshua Watson connects with people—where hammocking in Brazil, exploring Hong Kong, playing soccer in Haiti, or dodging taxis in Russia. He loves both the differences and similarities that are so colorfully displayed across our diverse world and reflects this passion in his illustrations, which have been featured in magazines, art publications, CD covers, children’s books, and on The Oprah Winfrey Show. His work appears in the New York Times bestselling Hank Zipzer series, the Clubhouse Mysteries (Ziggy and the Black Dinosaurs) series, Hope for Haiti, and more. He won the 2005 grand prize and was a 2006 finalist at the international SCBWI New York Showcase. Jesse lives with his wife and sons in Washington where he teaches art to kids, plays music occasionally and soccer religiously, and surfs the chilly northwest waters as often as he can. Visit him online at JesseWatson.com.