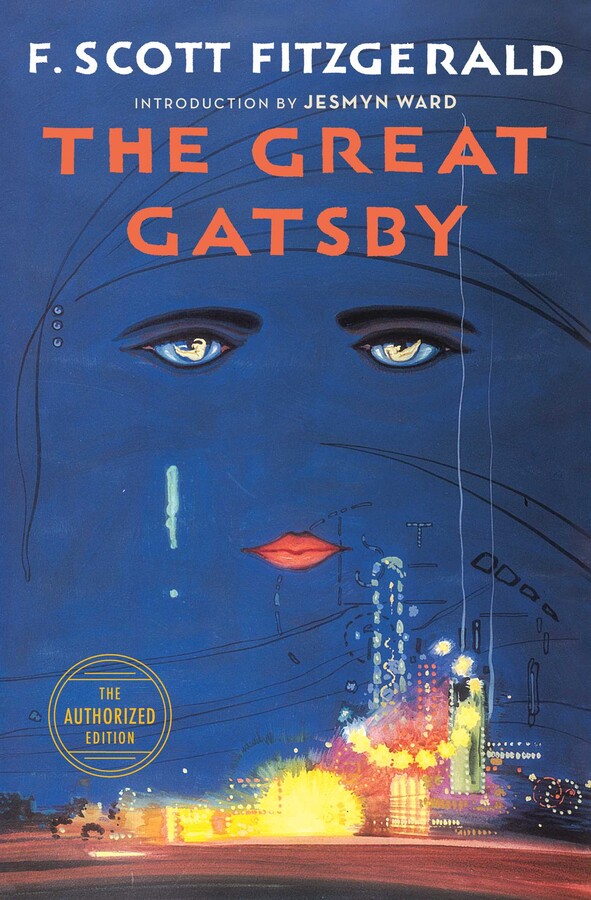 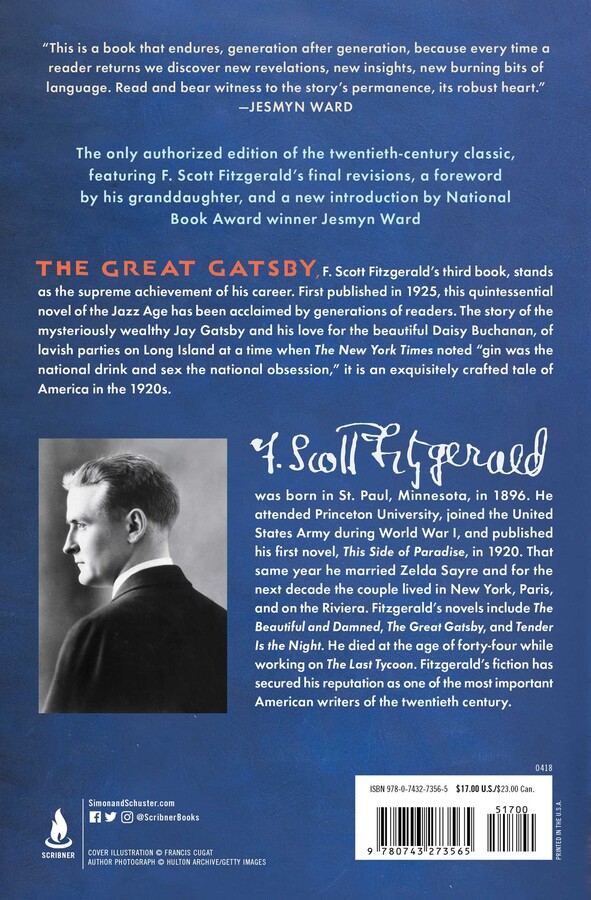 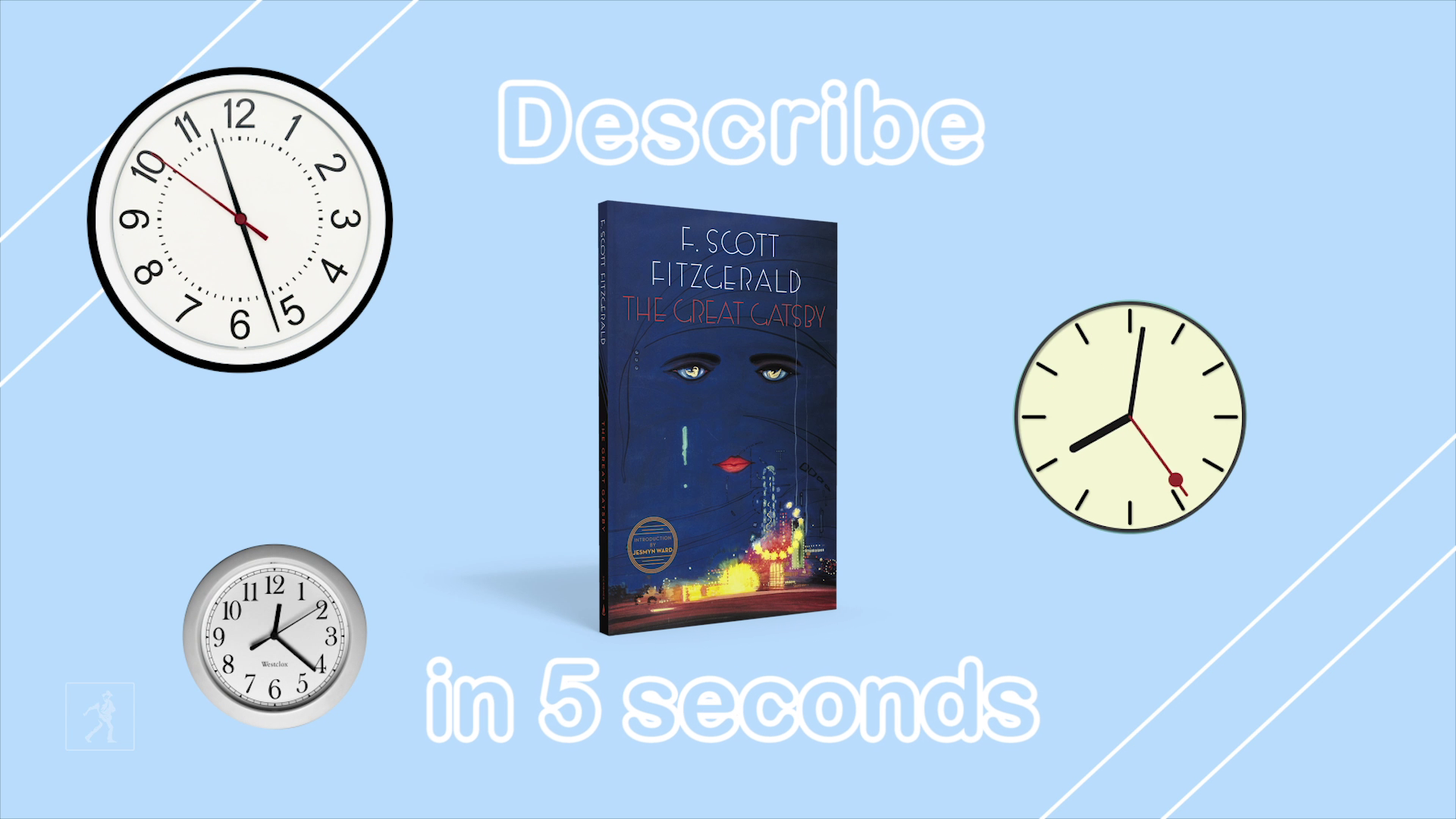 5 Second Summaries with Off the Shelf: THE GREAT GATSBY

By F. Scott Fitzgerald
PRICE MAY VARY BY RETAILER

The only authorized edition of the twentieth-century classic, featuring F. Scott Fitzgerald’s final revisions, a foreword by his granddaughter, and a new introduction by National Book Award winner Jesmyn Ward.

Nominated as one of America’s best-loved novels by PBS’s The Great American Read.

The Great Gatsby, F. Scott Fitzgerald’s third book, stands as the supreme achievement of his career. First published in 1925, this quintessential novel of the Jazz Age has been acclaimed by generations of readers. The story of the mysteriously wealthy Jay Gatsby and his love for the beautiful Daisy Buchanan, of lavish parties on Long Island at a time when The New York Times noted “gin was the national drink and sex the national obsession,” it is an exquisitely crafted tale of America in the 1920s.

This Scribner reading group guide for The Great Gatsby includes an introduction, discussion questions, and ideas for enhancing your book club. The suggested questions are intended to help your reading group find new and interesting angles and topics for your discussion. We hope that these ideas will enrich your conversation and increase your enjoyment of the book.

The Great Gatsby, one of the classics of twentieth-century literature, brings to life America’s Jazz Age, when, as The New York Times puts it, “gin was the national drink and sex the national obsession.” Nick Carraway, a Yale graduate and veteran of the Great War, moves to Long Island in the spring of 1922, eager to leave his native Middle West behind. He rents a tiny house in West Egg, dwarfed by a mansion owned by the most celebrated host of the season, Jay Gatsby. Everyone loves to drink and dance at Gatsby’s legendary parties, and everyone loves to gossip about Gatsby’s secret past. Directly across the bay in the tonier town of East Egg lies the home of Nick’s beautiful cousin and her millionaire husband: Daisy and Tom Buchanan. When Nick starts dating Daisy’s friend, the famed but deceitful golfer Jordan Baker, he finds himself caught up in a different romance: Gatsby begs for a reintroduction to Daisy. Gatsby and Daisy fell in love years ago, but the war and Tom Buchanan came between them. As the love triangle of Daisy, Tom, and Gatsby resurfaces – and Tom’s mistress, Myrtle, grows desperate with jealousy – Nick finds himself missing the plains of the Middle West, where hope can thrive in a wider landscape.

1. The Great Gatsby features an epigraph by “Thomas Parke D’Invilliers” (a writer invented by Fitzgerald) about winning a lover by any means. How does this short poem set the scene for the novel to come? Why do you think Fitzgerald would open The Great Gatsby with a fictional epigraph, rather than a real quote or poem?

2. Compare East Egg and West Egg. What kinds of people settle on each side of the bay? Why would a couple like the Buchanans reside in East Egg, and men like Nick and Gatsby on the other side? How does the division between these two villages compare to differences between the American East and West?

3. Discuss the role of honesty in The Great Gatsby. Which characters pride themselves on telling the truth? How does duplicity affect the relationship between Nick and Jordan, and the marriage of Tom and Daisy? What falsehoods has Gatsby relied upon to advance in society?

4. Compare two classic party scenes in the novel: the first party at Gatsby’s house that Nick attends, and the impromptu gathering at Tom and Myrtle’s apartment in New York City. How is each party enlivened by booze, romance, and chaos? How are the guests at each party similar, and how are they different? How does Nick’s drunken perspective color each scene?

5. Consider the role of gossip in the novel. What kinds of rumors do Gatsby’s guests spread about their host, and why? Why does public opinion have such a strong hold over the characters in the novel?

6. In Chapter VI, just after Daisy and Gatsby reunite at Nick’s house, Nick reveals the story of his friend’s transition from James Gatz to Jay Gatsby. Why does Nick choose this point in the story to tell Gatsby’s history? How does this chapter serve as a turning point in the novel?

7. Compare James Gatz to the man he became: Jay Gatsby. What do we learn about Gatz’s ambition as a youth? How did he make his transition to Gatsby? What elements from his past did he retain, even as he left his identity behind?

8. Eyes are a prominent feature throughout the novel – T. J. Ecklesburg’s spectacles watch over the “valley of ashes,” “Owl-eyes” attends Gatsby’s parties and funeral, and Nick senses Myrtle’s jealous gaze upon Tom and Jordan when they stop at Wilson’s gas station. What is the significance of this theme of surveillance? Who is being watched throughout the novel?

9. “‘Can’t repeat the past?’ [Gatsby] cried incredulously. ‘Why of course you can!’” (page 110). Discuss Gatsby’s attempts to recreate history. Why is he so eager to go back to life before he went to war, when he was a young officer in love with Daisy? What has Gatsby lost and gained since those days in Louisville?

10. At the moment of the accident that killed Myrtle Wilson, “first Daisy turned away from the woman toward the other car, and then she lost her nerve and turned back” (page 143). How else does Daisy lose her nerve on that drive from New York City to East Egg? Why does she turn back to Tom, instead of choosing a life with Gatsby?

11. Gatsby says about Daisy, “Her voice is full of money.” (page 120). Discuss how class and affects the romances in the novel. Would Daisy be just as alluring without her status? Would Gatsby or Tom be attractive without their fortunes?

12. Nick observes, “I see now that this has been a story of the West, after all,” (page 176) since none of its characters are from the East. How have ideas about the “West” changed since Fitzgerald’s day? What is particularly “Western” about each of these characters: Nick, Tom, Gatsby, Daisy, and Jordan? Do you agree with Nick that they are “unadaptable to Eastern life”? Why or why not?

13. Consider the setting of the novel: 1922 Long Island. Can you imagine this story within another time or place? Do you consider The Great Gatsby timeless, or do you think its characters and themes are deeply rooted in the postwar prosperity of the Roaring Twenties?

14. The novel ends with Nick thinking about “Gatsby’s wonder when he first picked out the green light at the end of Daisy’s dock” (page 180). Consider the symbol of the green light. What dreams and hopes does the light stand for? Is Gatsby’s “extraordinary gift for hope” an asset or a hindrance to his ambition, in the end?

15. If this was your first time reading The Great Gatsby, discuss what you knew about this American classic before you began reading, and how it met or defied your expectations. If you’ve read the novel before, think back to the first time you read it, and discuss how the novel has changed for you over time. Do you understand it differently today than you did in the past?

1. Come to your book club meeting dressed like your favorite Great Gatsby character! If you don’t happen to own a pink suit like Gatsby’s, consider donning a partygoer’s pearls, Daisy’s white dress, Owl-eyes’ oversized glasses, Jordan’s golf gloves, Tom’s riding pants, or any other accessory inspired by the Jazz Age.

2. In a nod to the Prohibition era, serve your book club’s refreshments – whether you’re pouring mint juleps or lemonade – in teacups.

3. Get your book club members in a jazzy mood – greet them with “Ain’t We Got Fun,” a song played during Gatsby and Daisy’s romantic reunion. You can find a recording of the 1921 classic here: http://www.loc.gov/jukebox/recordings/detail/id/7859/.

5. A theater company called the Elevator Repair Service has adapted The Great Gatsby into an eight-hour staged reading, Gatz. Stage a shorter version with your book club – assign parts to Nick, Gatsby, and Daisy, and have “Nick” read the beginning of Chapter V while “Gatsby” and “Daisy” read their lines of dialogue. Does the prose have a different impact when read aloud?

By F. Scott Fitzgerald
PRICE MAY VARY BY RETAILER

SEE ALL
See more by F. Scott Fitzgerald
Thank you for signing up, fellow book lover!