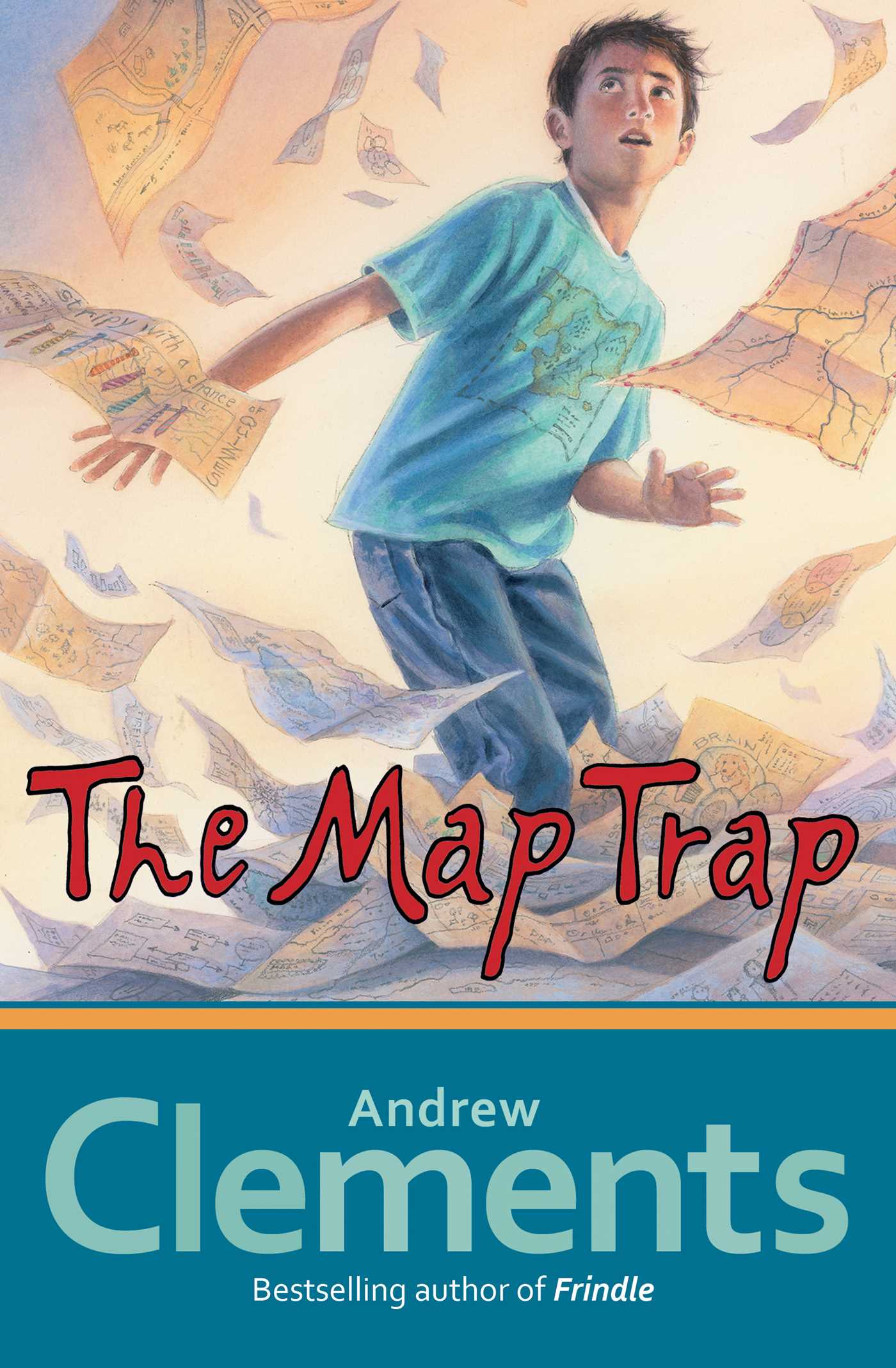 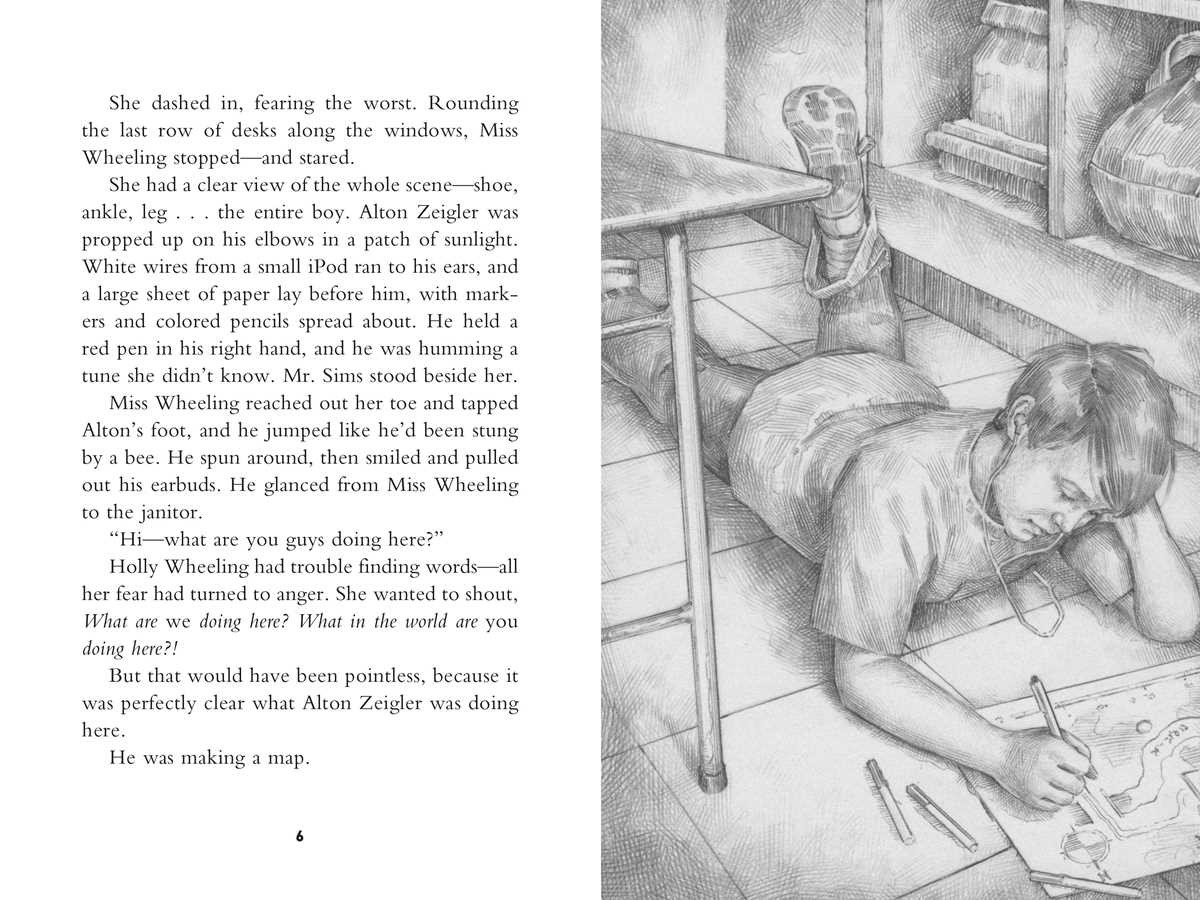 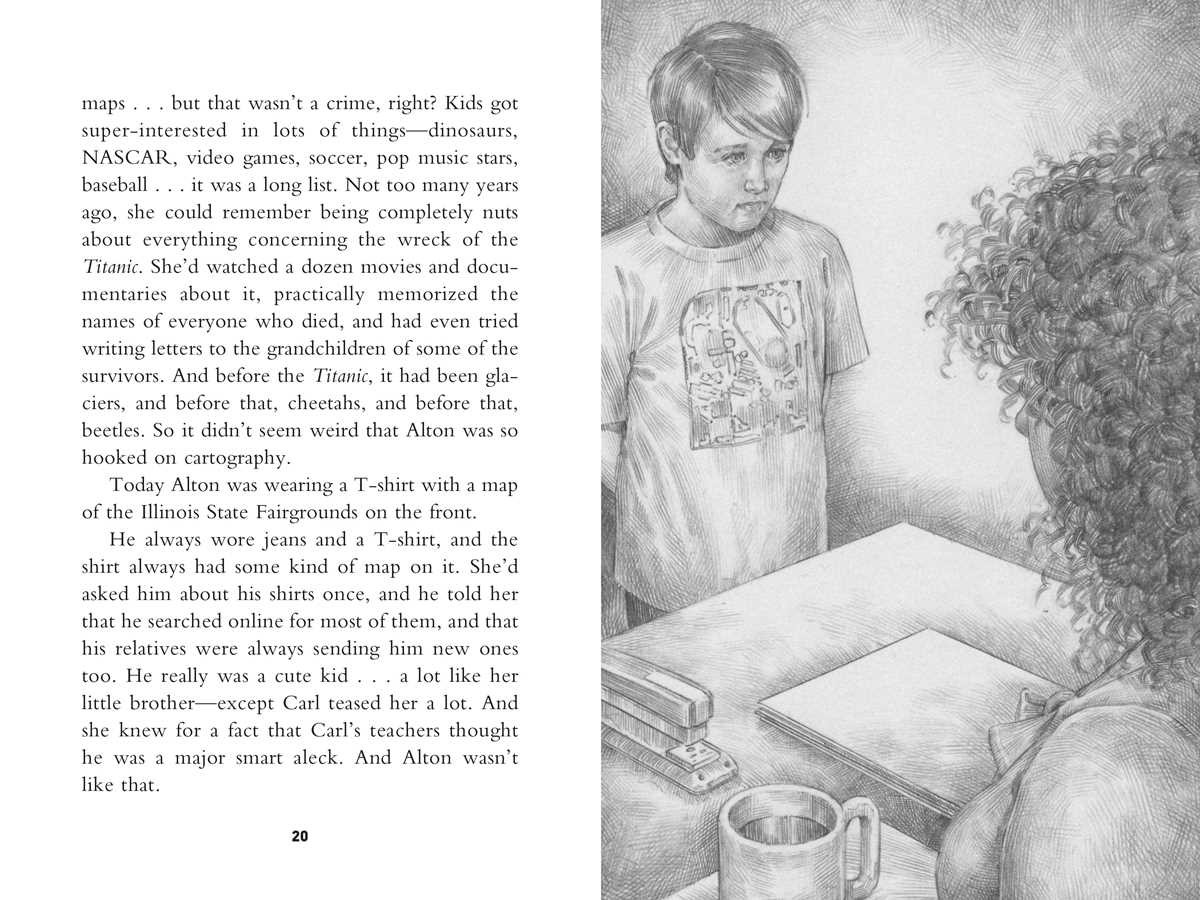 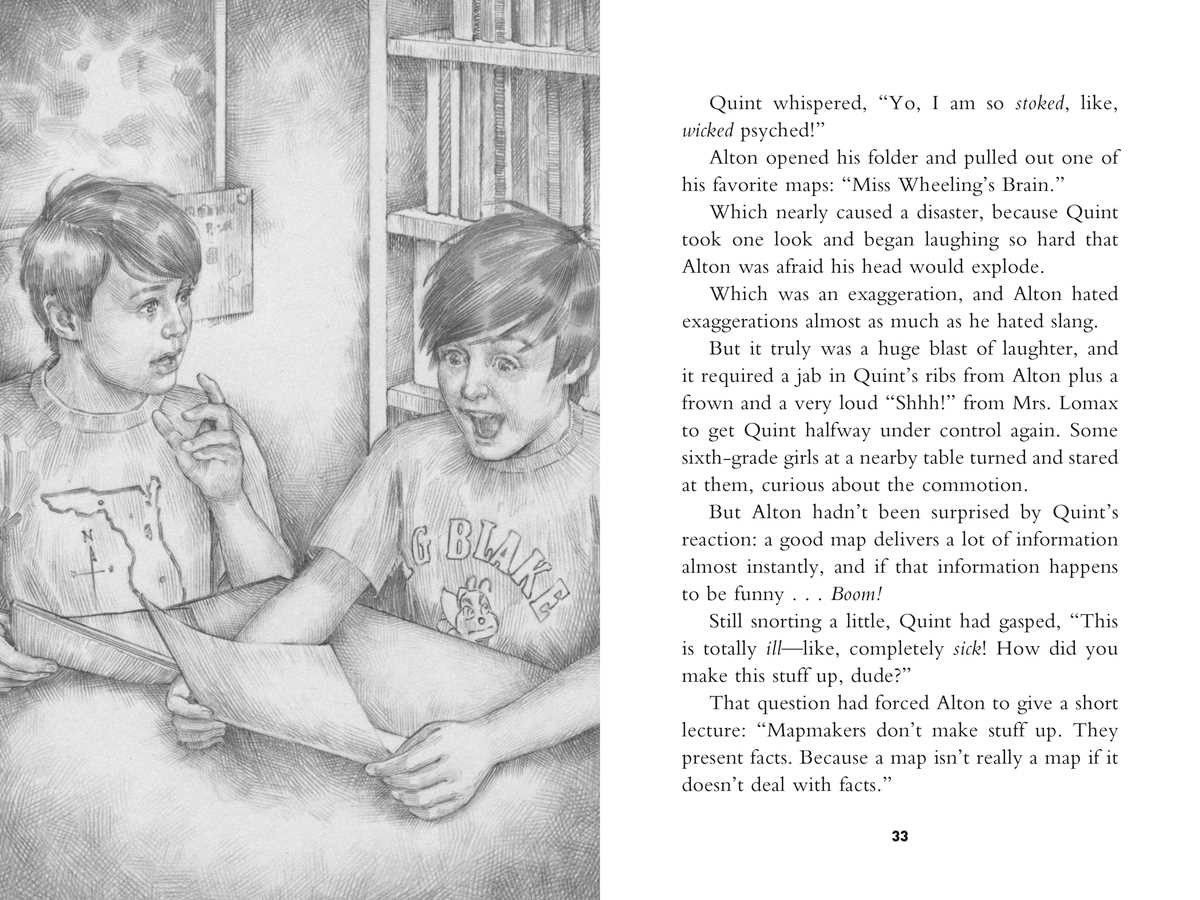 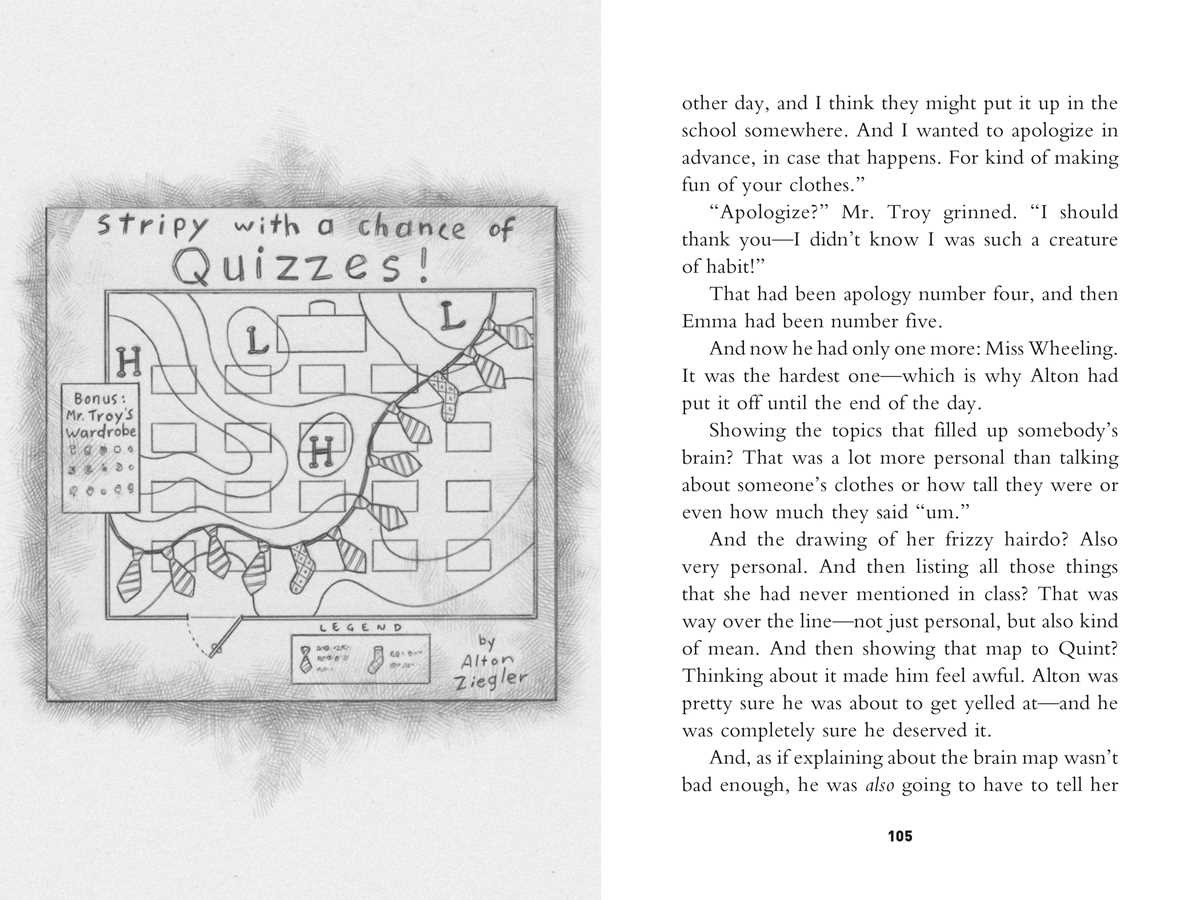 Alton Barnes loves maps. He’s loved them ever since he was little, and not just for the geography. Because maps contain more information than just locations, and that’s why he likes to draw maps as well as read them. Regular “point A to point B” ones, sure, but also maps that explain a whole lot more—like what he really thinks about his friends. And teachers. Even the principal.

So when Alton’s maps are stolen from his locker, there’s serious trouble on the horizon…and he’ll need some mad cartographic skills to escape it.

From “a genius of gentle, high-concept tales set in suburban middle schools” (The New York Times), this stand-alone story is off the charts.

Map Trap CHAPTER ONE BAD HAIR DAY
When the fire alarm began to beep and blink on Tuesday morning, the first thing Miss Wheeling thought about was her hair. She’d been outside on bus duty forty minutes ago, and it was a bright October day, moist and windy—the worst kind of weather for her hair. Couldn’t the principal have put off this drill for a couple of days?

It was free-activity time near the end of homeroom, and she clapped her hands sharply. “All right, everyone, this is a fire drill. Line up quickly, and I want you quiet! And don’t clean up, don’t do anything except get in line right now!”

She wrestled a scarf around her hair, and then, clutching her clipboard, Miss Wheeling led her homeroom students down the hall, past the gym, and straight outside toward their assigned spot along the playground fence. She noted with pride that hers was one of the first groups out of the building—pretty good for a brand-new teacher! She hoped the principal would notice.

She tried to remember the last time she’d been part of a fire drill, but she couldn’t get a clear picture. . . . It had probably been during high school—about five years ago, back when she was just Holly Wheeling, that girl who was crazy about insects.

She heard some loud whispering behind her, but she didn’t need to look to know who it was. This class had a handful of very gabby kids.

“Annie and Kelley? I asked you not to talk. A fire drill is serious business.”

She still felt amazed every time she realized that now she was Miss Wheeling, the teacher. She looked young, she felt young—she was young, only twenty-three years old. In fact, her own little brother was twelve, the same age as most of her students. And she was very glad that her family lived in Cedar Falls, Iowa, instead of Harper’s Grove, Illinois—the town where she now lived and worked. The thought of being Carl’s teacher? It was enough to give a girl nightmares.

The wind kicked up a flurry of dead leaves along the playground fence, and Miss Wheeling held the corners of her scarf tightly under her chin. But she knew it was hopeless. This was going to be a bad hair day—mega-bad. She’d been trying to set an appointment for a haircut for the past three weeks, but her first months as a new teacher had been insanely busy. Not that haircuts ever helped much. Her hair was very full, extremely curly, and almost impossible to style. She’d been fighting with it almost every day since she was about six years old. And losing.

All the classes were outside now, and she saw Mrs. Buckley at the far side of the playground. The principal was moving from teacher to teacher, checking off each group.

Miss Wheeling whipped her scarf off her head and stuffed it into the back pocket of her slacks. She looked at her clipboard and called out, “Billy Atkinson?”

Miss Wheeling hurried through the names as the principal came nearer, and finally called out, “Alton Ziegler?”

The principal was close now, talking with Mr. Troy, the other sixth-grade teacher.

Desperate, Miss Wheeling flipped to her attendance sheets . . . but Alton was definitely present today. She was certain that she’d seen him just half an hour ago, and she was sure—

“Good morning, Miss Wheeling.” Mrs. Buckley smiled at her and then at the kids. “Is your class all accounted for?”

“I’m . . . I’m sorry, but Alton Ziegler’s not here.” Miss Wheeling felt her face growing pale, and her hands were cold and clammy. She felt light-headed.

The principal frowned. “Was he in homeroom when you took attendance?”

Mrs. Buckley didn’t look at it. With a sharp edge to her voice, she said, “I’ll stay with your class. Go and find him. Right now.”

Miss Wheeling half walked, half ran to the gym door, and she could feel the eyes of everyone in the school watching her—and watching the way her hair bounced around as she ran.

Breathless now, she sprinted to her classroom door, but it was locked—and she didn’t have a key.

It was a shoe, a boy’s sneaker.

Leaning forward, she pressed her nose against the glass and cupped her hands around her eyes and forehead to block the glare from the hallway lights.

It was definitely a shoe—and also an ankle, plus six inches of a leg . . . wearing blue jeans!

With one hand she banged on the door, still looking at that foot. She called out, “Alton? Alton . . . ? Is that you? Alton! Answer me!”

The shoe, the foot, the leg—nothing moved.

Miss Wheeling yelled down the hallway. “Mr. Sims? Mr. Sims! Can you hear me?”

“An emergency in room forty-three! Bring a key, and hurry!”

Miss Wheeling heard a sharp crack as a wooden broom handle hit the floor, and then jangling keys as the janitor came around the corner at a dead run. A moment later he unlocked her door and shoved it open.

She dashed in, fearing the worst. Rounding the last row of desks along the windows, Miss Wheeling stopped—and stared.

She had a clear view of the whole scene—shoe, ankle, leg . . . the entire boy. Alton Ziegler was propped up on his elbows in a patch of sunlight. White wires from a small iPod ran to his ears, and a large sheet of paper lay before him, with markers and colored pencils spread about. He held a red pen in his right hand, and he was humming a tune she didn’t know. Mr. Sims stood beside her.

Miss Wheeling reached out her toe and tapped Alton’s foot, and he jumped like he’d been stung by a bee. He spun around, then smiled and pulled out his earbuds. He glanced from Miss Wheeling to the janitor.

“Hi—what are you guys doing here?”

Holly Wheeling had trouble finding words—all her fear had turned to anger. She wanted to shout, What are we doing here? What in the world are you doing here?!

But that would have been pointless, because it was perfectly clear what Alton Ziegler was doing here.

He was making a map.

Dan Andreasen is the illustrator of numerous picture books, including By the Dawn’s Early Light: The Story of the Star-Spangled Banner by Steven Kroll, which was named an ABA Kids’ Pick of the Lists and a Notable Children’s Trade Book in the Field of Social Studies; A Quiet Place by Douglas Wood; and Sailor Boy Jig by Margaret Wise Brown. He has also authored several picture books, including With a Little Help from Daddy and A Special Day for Mommy. Dan lives with his family in Medina, Ohio.