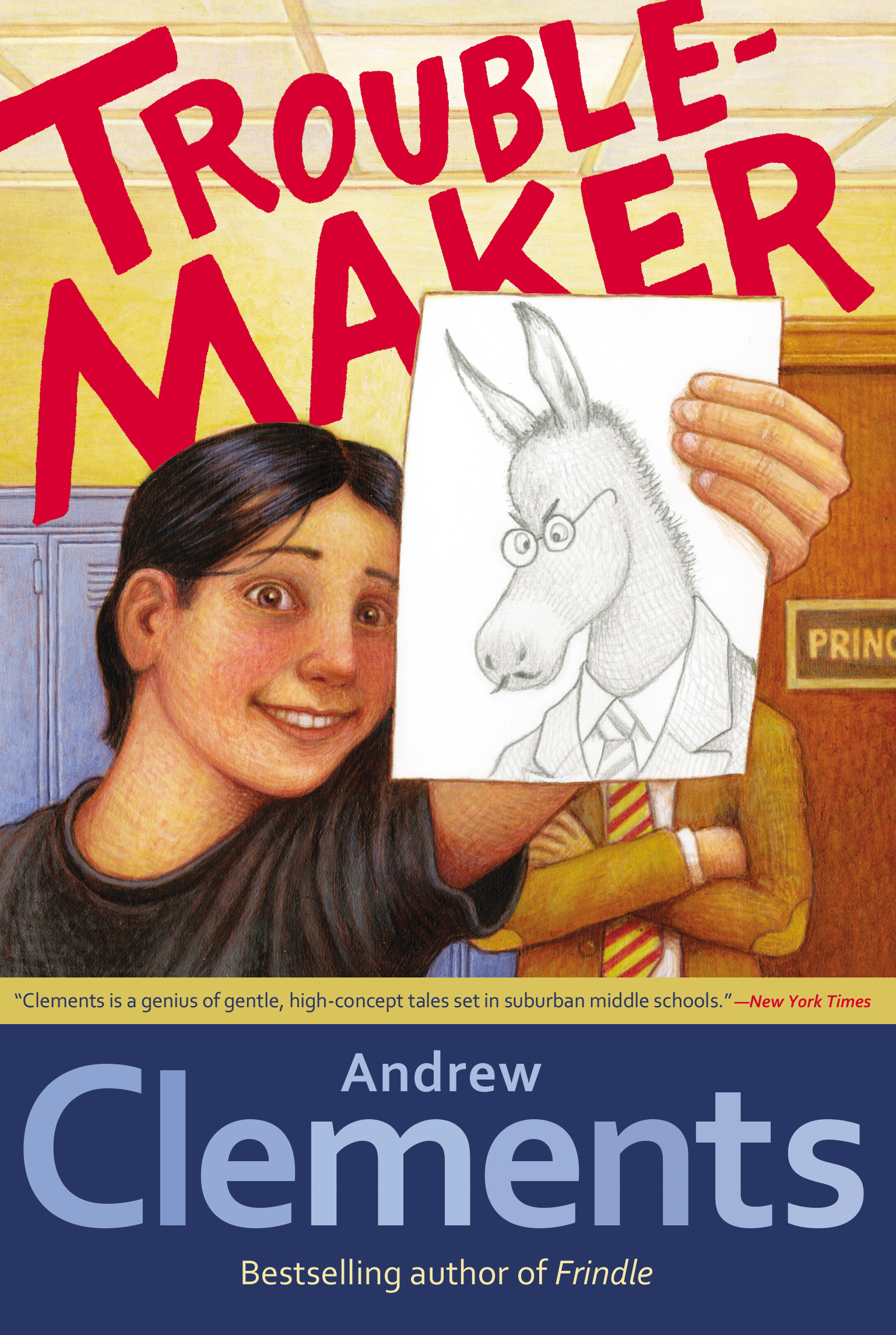 Once a troublemaker, always a troublemaker? A reputation proves challenging to change in this “rock-solid school story” (Publishers Weekly) from Andrew Clements.

Clayton Hensley is accustomed to trouble: There’s a folder of incident reports in Principal Kelling’s office that’s as thick as a phonebook and growing daily. Most recently, Clay’s art teacher told the class to spend the period drawing anything they wanted, and Clay decided to be extra “creative” by drawing a spot-on portrait of Principal Kelling…as a donkey.

It’s a pretty funny joke, but Clay is coming to realize that the biggest joke of all may be on him. When his big brother, Mitchell, gets in some serious trouble, Clay decides to change his own mischief-making ways…but he can’t seem to shake his reputation as a troublemaker.

From the master of the school story comes a book about the fine line between good-humored mischief and dangerous behavior—and how everyday choices can close or open doors.

By clicking 'Sign me up' I acknowledge that I have read and agree to the privacy policy and terms of use. Free ebook offer available to NEW US subscribers only. Offer redeemable at Simon & Schuster's ebook fulfillment partner. Must redeem within 90 days. See full terms and conditions and this month's choices.
A reading & activity guide for

Clayton Hensley has been getting into trouble since he started elementary school. From running in the halls to drawing an unflattering cartoon of the principal, he’s always been pretty proud of his pranks. Then his big brother, Mitch, returns home from a stint in jail with a new attitude and wants Clay to change his ways too. But Clay’s rambunctious friends don’t understand. Resisting the urge to act up when somebody bugs him is not as easy as he thought it would be. And a few weeks of good behavior may not be enough for the people Clay tricked and ridiculed to stop thinking of him as a troublemaker. Clements tells a thought-provoking and important story about rules, reputations, and the possibility to change course for the better.

1.      List at least three things you think you know about Clay after reading only the first page of Troublemaker. What is your opinion of Clay at the end of Chapter 1?

2.      Who is Mrs. Ormin? How does she help readers understand Clay’s story?  How does Clay feel about Mr. Dash, Mr. Kelling, and Mrs. Ormin? Is he angry at them? Why do you think Clay behaves the way he does in the early chapters of the book?

3.      What do you think Clay expected would happen after Mr. Dash and his classmates see the donkey picture? What events resulting from the inappropriate drawing surprise Clay?

4.      If you were the school principal, would you have dealt with Clay’s disrespectful cartoon in the same way as Mr. Kelling? What message would you have wanted to get across to Clay? Explain your answer.

5.      When we first meet Clay’s brother, Mitch, he has just been released from jail. Why was he there? How have Clay, his mom, his dad, and Mitch himself reacted to this experience?

6.      Is the Mitch who came home from jail the person Clay was expecting? How does Mitch respond when Clay shows him the donkey portrait?

7.      Why does Mitch want Clay to start behaving better? Why does he ask Clay to trust him? Why does Clay decide to do so? How do you decide whether or not to trust a person?

8.      List at least three things that Mitch makes Clay change about his appearance. Why might this help Clay make the more important change—to his attitude? Do the clothes and hairstyles of your classmates affect the way you think about them?

9.      On his first day at school with his new look, what opportunities for trouble does Clay resist? How does Clay’s friend Hank react to the new Clay? How do Clay’s other classmates and teachers react?

10.  Why does Clay have so many suspects to consider when he wonders who defaced his self-portrait? What does this say about Clay? Why does Clay stay home on Halloween night?

11.  How does his family react when the police come looking for Clay? Why is the trust Clay put in Mitch important now? How else does trust play a role at this moment in the story?

12.  What does Clay realize about his father’s attitude toward himself and his big brother? Is Clay surprised by his realization? Why or why not?

13.  Do you think Mr. Kelling was right to suspect Clay of painting his door? Would you have suspected Clay? Was Clay right to go to Mr. Kelling’s house the next day? How does Clay look back on past Halloweens now?

14.  Compare Clay’s drawing of the donkey-face principal to Hank’s destruction of Clay’s self-portrait. How are these actions similar? What do you think Clay comes to understand about each of them? Do you think Clay and Hank will remain friends? Explain your answer.

1.      Imagine you are another student in Mr. Dash’s art class, along with Clay. Write a two to three paragraph journal entry describing the day Clay drew the donkey-principal picture and how you felt about it. Consider noting how you imagine Mr. Kelling will feel when he sees the picture and/or what you think of Clay.

2.      In the character of Clay a week before the story begins, write a one-page letter to your brother Mitch in jail. How are you feeling? What do you want to do with Mitch when he returns home? What do you want him to know?

3.      Get a copy of your school’s student handbook or rules of conduct. Find out what type of punishment you think Clay would have received if he had been a student at your school when he drew the donkey cartoon. With friends or classmates, discuss what you feel would have been the most appropriate discipline for Clay.

4.      Cut pictures of kids and teenagers from old magazines and newspapers. Holding up one picture at a time, ask classmates to describe the kind of students or friends they imagine each person would be, based on their clothing and hairstyles. Discuss your results. Do most people make the same decisions about the pictures they see? What clothes, hairstyles, colors, or accessories tend to cause people to make assumptions about an individual? Is it right to make these assumptions? Write a dress code for your school based on this discussion.

5.      When Clay changes his behavior, his goals change too. He begins to take drawing more seriously. On a sheet of paper, write down your goal or goals for the school year. Goals can be related to schoolwork, sports, other activities, your family, or your community. Below your goal(s), write down what attitudes and actions might help you achieve these goals. If desired, discuss your goals with a parent, teacher, or other adult who might have some suggestions to help you reach them.

6.      With a friend or classmate, role-play a conversation between Clay and Hank in which the truth about the defaced self-portrait is revealed, or a conversation between Clay’s mother and father in which they discuss whether or not to believe Clay is innocent of the Halloween graffiti incident. Then, discuss with friends or classmates whether you think there is a “right” and a “wrong” person in either one of these scenarios.

7.      Clay is a talented artist who, at the end of the story, discovers that drawing can be even more rewarding than pulling pranks. Go to the library or online to find careers that would be good for someone with Clay’s talents, such as animator and graphic designer. Make a list of at least ten jobs to recommend to Clay.

8.      In the character of Clay, write a paragraph describing how and why you decided to include the donkey mask in your prize-winning self-portrait.

9.      Use colored pencils to make your own self-portrait. Include your face as well as at least one other object or image that shows something special about your goals or your attitude.

Andrew Clements (1949–2019) was the author of the enormously popular Frindle. More than 10 million copies of his books have been sold, and he was nominated for a multitude of state awards, including a Christopher Award and an Edgar Award. His popular works include About Average, Troublemaker, Extra Credit, Lost and Found, No Talking, Room One, Lunch Money, and more. He was also the author of the Benjamin Pratt & the Keepers of the School series. Find out more at AndrewClements.com.

Mark Elliott has a BFA in illustration from the School of Visual Arts. He has illustrated a number of book covers, and his work has been exhibited at the Society of Illustrators and the Art Directors Guild. Mark lives on a sheep farm in the Hudson Valley region of New York.