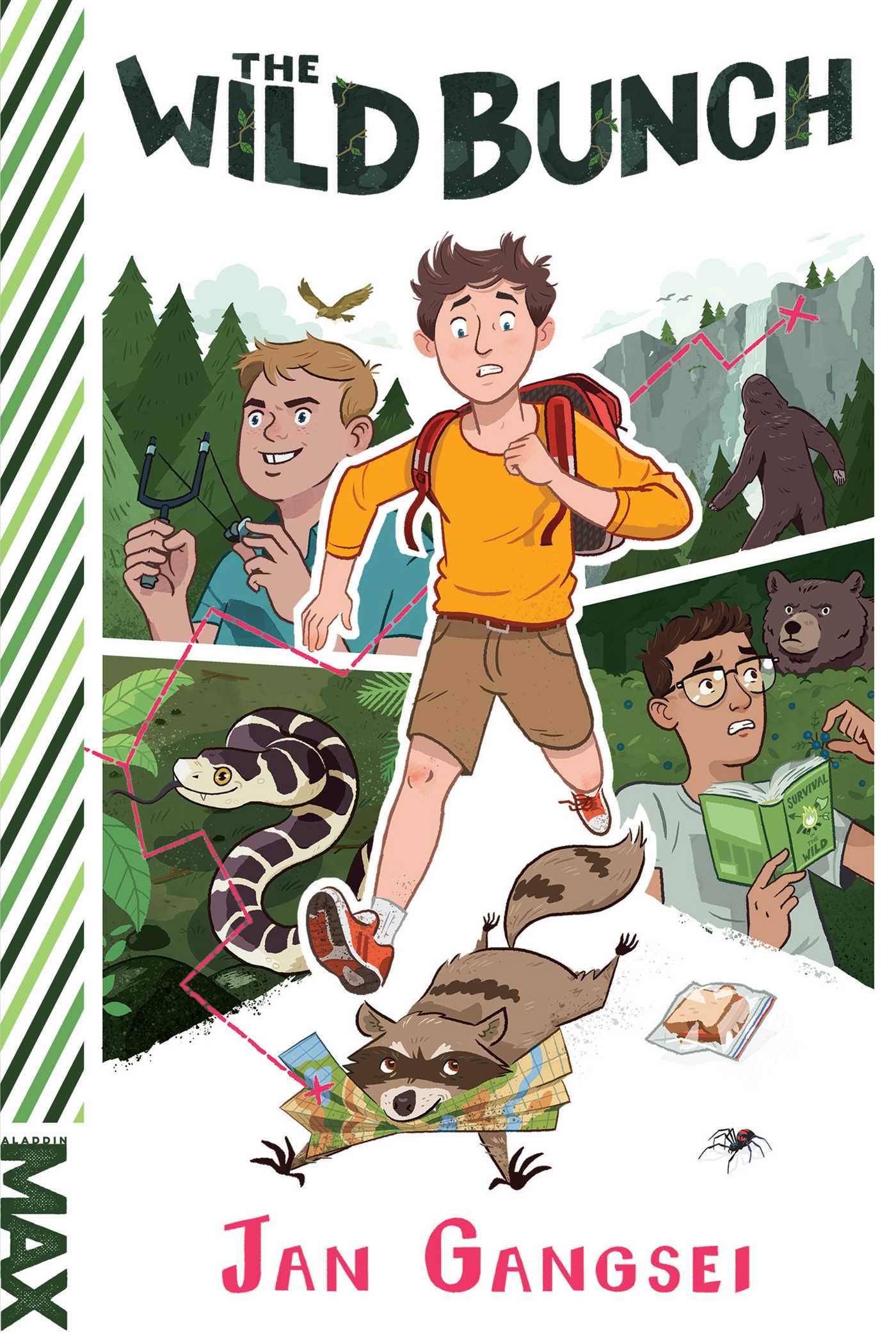 Part of MAX
By Jan Gangsei
PRICE MAY VARY BY RETAILER

Three unlikely friends—brainiac Hector, bullish Jack, and sarcastic Paul—find themselves braving the wilderness in search of the mythical Beast of Bear Falls in this hilarious MAX novel.

As far as Paul Adams is concerned, the idea of a weekend camping in the nearby state park with his dad’s two college friends and their sons, Hector and Jack, sounds like a nightmare. But even he finds the myth of the Beast of Bear Falls—a legendary Bigfoot creature—intriguing.

The trip gets off to a rough start, and calamity and disaster follow catastrophe. Against all odds, arguing most of the way, the crew face all sorts of obstacles natural and man-made. Can the three boys make it to Bear Falls and uncover the truth about the Sasquatch living there?

I’d managed to survive yet another year of brain-numbing homework, fill-in-the-circle-completely test forms, and whatever that stuff is that the cafeteria workers stick in Sloppy Joes.

Curled snugly in my nice warm bed, I was groggily considering all the things I’d do today: sleep till noon, shower in the lawn sprinkler, spend all afternoon lounging in the California sunshine . . .

I bolted upright, whacking my head on the bunk above me. My eyes watered, my legs twitched, and my heart tried desperately to eject itself from my rib cage.

Huh? I held the glowing numbers closer to my face and blinked.

I dropped the clock. Was this some kind of joke?

“Luiz, my man!” I heard Dad from somewhere downstairs, followed by the front door slapping open and shut.

Who in the heck was Luiz? And why was my dad speaking in that ridiculous voice?

And then it all came flooding back. The truth I’d been trying to block out. The weekend trip.

Not Luiz . . . not already. He wasn’t supposed to arrive until morning, and in my book 6:47 a.m. was not morning. It was definitely the tail end of the middle of the night.

I yanked the covers over my head. Next thing I heard was the sound of Dad’s feet thundering up the stairs. Urgh. Did he always have to be so . . . enthusiastic? I peeked from beneath my blankets, eyes darting around the room in desperation.

One dresser. One second-story window. One bookshelf. And one truly pathetic-looking half-deflated beanbag chair.

Nowhere to run. Or hide. I flattened myself to the bed. Maybe if I kept real still, Dad wouldn’t notice. . . .

I heard the door fly open. Whatever happened to privacy? Clearly I needed to invest in better security. A mantrap perhaps. Even a lock would do.

“Come on, sleepyhead!” Dad said with a clap.

I continued to play dead.

“I wonder where the little guy’s got to,” Dad said in the kind of silly voice usually reserved for six-year-olds. “I guess Paul musta packed his bags and left home for the summer. Oh well, I guess I’ll have to go have fun without him.”

Then, my covers were whipped off, leaving me clutching only my pillow. I opened one eye.

Dad stood there wearing a big goofy grin and an outfit ripped straight from the pages of a Wildlife Enthusiast catalog: khaki shorts, khaki vest covered with fishing lures, and coordinating khaki hat plastered with hooks, feathers, and fishing bobs.

He dropped the blankets, went to the window, then whipped open the curtains. I screamed like a vampire exposed to light for the first time. Dad just laughed. The shiny metal pieces on his vest reflected the early morning sunlight in every direction, making him look like some sort of camouflage disco ball.

“Time to get up, Paulie! You haven’t forgotten about Bear Falls, have you?”

That had nothing to do with the trip. I just couldn’t be bothered to get undressed the night before, so I was still wearing my favorite long-sleeved Green Day T-shirt and nicely wrinkled cargo shorts. Wearing my clothes in bed also prevents Mom from getting near them. Because Mom irons everything: jeans, T-shirts, underwear, potted plants. Nothing’s safe in the Adams house. Basically, the only way to avoid looking like Mark Twain Middle School’s reigning King of Starch is to break my clothes in overnight. I mean, it’s bad enough being twelve sometimes. The last thing I need is to be known as the twelve-year-old with the crease in his socks.

The clock hit 6:48. Dad just stood there, not taking the hint.

I sighed and sat up. I tried to smile, but it probably looked more like a grimace.

Dad winked. “Let’s find your backpack, buddy.” He went to my closet.

But he’d already opened the door. Hey, he couldn’t say he wasn’t warned. All my stuff—clothes (some clean, some not so much), sports gear, stacks of comics, old computer games, semiretired sneakers—came pouring out in an avalanche, burying him and swamping his cries. He came up like a drowning man, with an old jockstrap on his head. And somehow he was still grinning. He shook the stuff off and held out my backpack.

“Let’s get cracking! Want to hit the road before traffic picks up!”

“Really? Do I have to, Dad?” I said. “I mean, I’m not much of a camper.” I rubbed my crusty eyes again and coughed. “Or a morning person. How about I just stay here? I’ll probably just drag you, uh, outdoorsmen down anyway.”

Dad grinned and shook his head.

“I’ll do extra chores for a month.”

Another shake. The fishing lures clanked together.

Dad put his hands on his hips.

And this time, his smile faltered just a little, and he looked kind of desperate, so I stopped fighting. I knew Dad would never say it outright, but this trip meant a lot to him. He’d been working his butt off for the last year at school, taking on extra classes in the hope of a promotion to head of his department. Just a couple of days ago, they’d told him the job was going to someone else. All those late nights and weekends marking papers and preparing lessons had been for nothing. He pretended it didn’t matter, but I knew my parents were worried about money—Mom had been laid off three months ago.

But “fun”? Let’s just say Dad and I don’t quite share the same definition of “fun.” Like last summer, I wanted to go to the Super Mega Blast Water Park and ride the Cannon Shooter. Instead, Dad hauled me off to this tumbledown cabin in the middle of nowhere that was the childhood home of some Really Important Historical Figure who died three hundred years ago. Probably of boredom.

Don’t get me wrong; it’s not like I don’t respect the past and all. But with a history teacher for a dad, it kinda goes without saying I’ve seen enough Musty Old Places of Historical Significance to last an entire lifetime.

“Okay, chop-chop!” Dad said. He tossed the bag toward me and headed back into the hall, whistling “Yankee Doodle.”

I plucked clothes from my dresser and floor and jammed them into my backpack, doing my best to squash any creases out of them. I was almost done when there was a knock on the door. “Hello, honey,” Mom’s voice said sweetly. “I have something special for you since you had to be up so early!”

Yes! Maybe this morning wasn’t a total bust after all. I wondered if she’d made me pancakes. Or waffles. Or those little French toast things cut into triangles. I flung open the door expectantly and discovered . . .

Mom, standing there in her yellow bathrobe, holding a black T-shirt by the shoulders. “Father and Son Xtreme Adventures” was written across the front.

“Here!” she said. “I ironed this for you!” She pressed the still-warm garment to my chest. I crept back a step.

Cute? Just what any self-respecting twelve-year-old wants to hear. “No, thanks,” I said.

“I insist.” Mom smiled. She held the T-shirt like it was a net and I was a wild creature about to be captured.

I listened to the sound of my dad’s whistling in the hallway.

“Not just that,” said Mom, lowering her voice. “He feels bad because you guys never spend any time together.”

“We watched a Giants game just last week!” I protested.

“Quality time,” said Mom. “Sitting side by side shouting at the TV doesn’t count.”

She was right, I guess. There was a point when Dad and I did tons together—swimming, baseball, or just hanging out at the mall. When I was a couple of years younger, we even used to jam together in the garage while he taught me guitar. I’d lost interest, though. Between school, friends, and video games, I didn’t have much time for Dad these days.

The world disappeared for a second as she put the T-shirt over my head.

Sadly, when it reappeared, nothing had changed.
Jan Gangsei

Jan Gangsei grew up in the hills of Vermont, where she began her career as a journalist and photographer. After stints in Key West, New York City, and Barbados, Jan finally settled with her family in Northern Virginia, where she writes full time. Her debut novel, Zero Day, is a political thriller set in her backyard of Washington, DC. She is also the author of The Wild Bunch.

Part of MAX
By Jan Gangsei
PRICE MAY VARY BY RETAILER