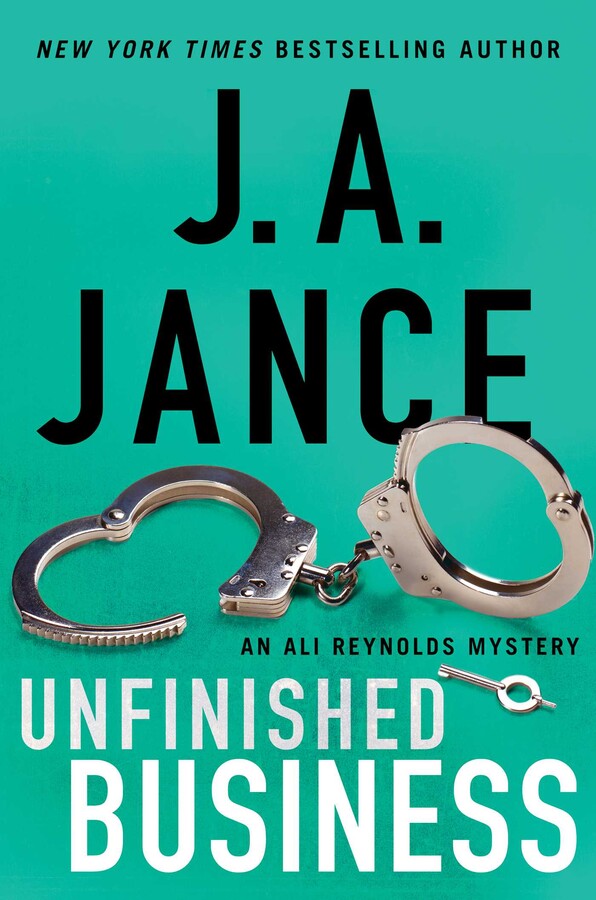 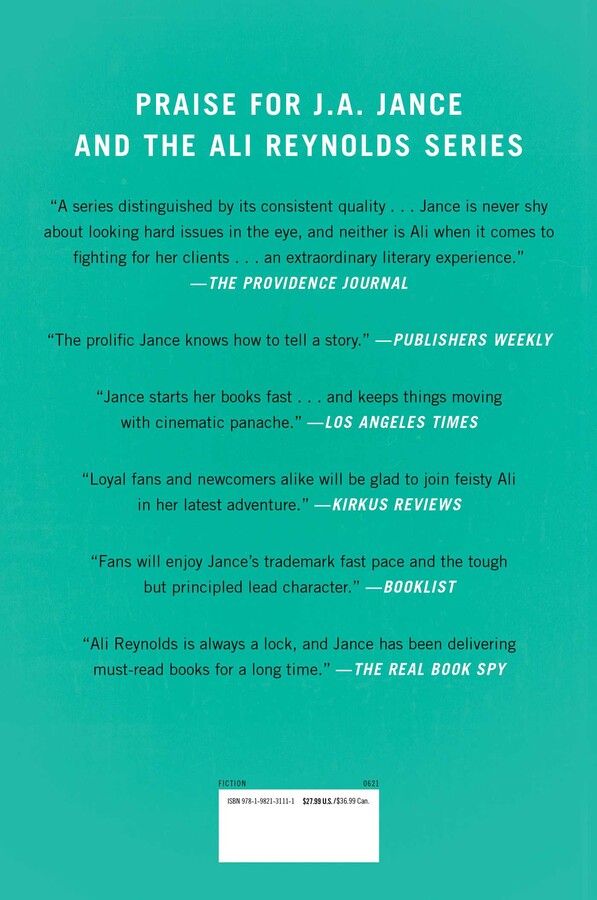 Book #16 of Ali Reynolds Series
By J.A. Jance
PRICE MAY VARY BY RETAILER

In this heart-pounding and sharply written thriller from J.A. Jance, the “grand master of the genre” (The Providence Journal), Ali Reynolds’s personal life is thrown into turmoil just as two men show up on the scene—a former employee of her husband’s who has just been released from prison and a serial killer who sets his sights a little too close to home.

Mateo Vega, a one-time employee of Ali Reynold’s husband, B. Simpson, has spent the last sixteen years of his life behind bars. According to the courts, he murdered his girlfriend. But Mateo knows that her real killer is still on the loose, and the first thing he’s going to do when he gets a taste of freedom is track him down.

After being granted parole, a wary Mateo approaches Stu Ramey of High Noon Enterprises for a reference letter for a job application, but to his surprise, Stu gives him one better: He asks him to come on board and work for B. once again. Just as Mateo starts his new job, though, chaos breaks out at High Noon—a deadbeat tenant who is in arrears has just fled, and tech expert Cami Lee has gone missing.

As Ali races to both find a connection between the two disappearances and help Mateo clear his name with the help of PI J.P. Beaumont, tragedy strikes in her personal life, and with lives hanging in the balance, she must thread the needle between good and evil before it’s too late.

An icy wind blew in from the west, and Broomy McCluskey, age fifteen, huddled in the moon-cast shadow on the far side of the shed, shivering—whether from the chill or anticipation—and waiting for the light in the kitchen to come on, signaling that his mother was about to send her mutt, Rocco, out to do his business. Broomy flexed the fingers of his right hand, feeling the unfamiliar weight of the brass knuckles and wondered if, when the time came, he would have nerve enough to go through with it.

Another blast of cold air ripped through the night. The first snow of the winter was supposed to fall by morning, and a good snowstorm was exactly what Broomy needed. Still, he shivered again, wishing he’d brought his jacket along. Had he done so, however, one or more of his drinking buddies might have noticed he wasn’t just going outside to take a leak. It wasn’t a huge worry, though. As far as he could tell, by the time he left, everyone was far too soused to notice much of anything.

The party was supposed to be nothing more than a last-minute kegger, held at Tony’s house because his parents were out of town for a week. Broomy, having raided one of his dad’s secret stashes of booze, had crashed the party, ensuring his welcome by adding a couple of fifths of tequila to the mix. He might have been the youngest guest at this underage gathering, but the tequila he brought along made him a very welcome one. He had pretended to swill down shots right along with everybody else, but by the time his buddies started passing out, Broomy was still stone-cold sober.

After making his excuses, he left the party by way of the back door and went straight to Tony’s aging GMC pickup. He chose that vehicle for two reasons: Everyone knew that Tony always left his keys in the ignition and the brass knuckles he had inherited from his cousin in the glove box. Broomy had no problem maneuvering the vehicle out of the driveway. He might have been too young to have a license, but he had his learner’s permit, and his dad had been teaching him how to drive a stick shift. His big worry now was that a cop might spot him coming or going, so Broomy made sure he didn’t exceed the speed limit or do anything at all that might attract unwelcome notice.

At last the kitchen light came on. The back door opened, and Rocco sprinted down the steps and into the yard. As the door slammed shut behind him, Rocco stopped for a moment and stood still, sniffing the air. That’s when Broomy let out a low whistle. He didn’t care for his mother much, but he did like her dog. Without so much as a bark, Rocco galloped straight to the shed and stood there with his tail wagging while Broomy pulled a hunk of jerky out of his pocket. Rather than giving it to the dog immediately, Broomy opened the door to the shed and tossed the jerky inside. When Rocco leaped in to retrieve it, Broomy shut the door behind him.

Then he waited again. Minutes later, Ida Mae McCluskey, now wearing her long flannel nightgown, appeared on the back porch. “Rocco,” she called. “Where the hell are you? It’s cold out here.”

Broomy knew from experience that the dog hated being locked in the shed. Rocco was scratching on the door and whining, and when the door didn’t open, he started to bark, just as Broomy hoped he would. Stepping back into the shadows, Broomy peered around the corner and watched Ida Mae make her moonlit way across the yard, still calling for the dog, who was barking frantically by this time, hoping to be let out.

Tense with anticipation, Broomy stood still and held his breath, remembering what Tony had told him about the brass knuckles. “If you hit someone with these hard enough, right at the base of the skull, they’ll be dead as a doornail, and there won’t be no blood neither.” That’s what Broomy was counting on—no blood.

As his mother approached the door, Broomy sneaked around the far side of the shed so he’d be able to surprise her from behind.

“How the hell did you get yourself stuck in there, you stupid dog?” Ida Mae muttered as she reached to wrench open the door. “Come on, now. I’m freezing my ass off.”

Those were Ida Mae’s last words. Before her hand touched the knob, Broomy aimed a powerful punch at the base of her skull. He heard a sharp crack as the brass knuckles connected with skin and bone. His mother crumpled to the ground and lay there moaning. There wasn’t a moment to lose. Afraid she might start making noises or calling for help, Broomy bent down and picked her up. It wasn’t hard. Two years of weight lifting with the JV wrestling squad paid off in that moment. At this point Broomy could regularly bench-press a hundred fifty pounds, and his mother didn’t weigh nearly that much.

He slung her over his shoulder in a fireman’s carry and hurried back toward the truck he’d left parked on the side of German Gulch Road, just beyond their drive. Halfway to the truck, Broomy felt a warm gush of moisture as urine flowed down over the front of his shirt and pants. That’s when he knew she was gone. Probably the very act of slinging her over his shoulder had been enough to finish her off. Now that his mother was dead, Broomy assumed he would have felt something, but he didn’t. He was mostly annoyed that he was so wet, because it really was cold as hell.

Back at the truck, he hoisted her over the tailgate and dropped her into the bed of the pickup. Then he headed for what he hoped would be Ida Mae’s final resting place. All around Butte there were low spots where brackish, mineral-laced mine-water runoff spilled into the earth and formed shallow ponds. Anaconda, doing its best to keep kids and wildlife from coming into contact with the contaminated water, had built chain-link fences and padlocked gates around most of the ponds, not that the gates were impervious. As kids, Broomy and his pals would use a bolt cutter to slice through the chains so they could come and go at will. When they were done wading, they’d wire the chain back together in a fashion that made it appear to the casual observer that the padlock and chain were still intact. Earlier that night, before Tony had come to pick him up, Broomy had smuggled his dad’s bolt cutter and a roll of baling wire out of the shed and hidden them away in some brush near the end of the drive. With his mother loaded into the pickup, Broomy retrieved both those items and headed out.

The pond he had in mind was less than two miles from the house and down half a mile of rocky dirt road. At the gate he made short work of the chain. Once the gate was open, he went to retrieve his mother’s body from the bed of the pickup. Before lifting her out, he took hold of her cold left hand, wrenched off her wedding ring, and stuffed it in his pants pocket. Then he picked Ida Mae up and carried her to the edge of the pond, where he heaved her into the water. He couldn’t throw her very far, and the pond wasn’t especially deep—only a couple of feet—but it was deep enough. Standing in the moonlight, Harvey “Broomy” McCluskey caught one last glimpse of his mother’s pallid face as her still body slipped beneath the surface of the water.

J.A. Jance is the New York Times bestselling author of the Ali Reynolds series, the J.P. Beaumont series, and the Joanna Brady series, as well as five interrelated Southwestern thrillers featuring the Walker family. Born in South Dakota and brought up in Bisbee, Arizona, Jance lives with her husband in Seattle, Washington. Visit her online at JAJance.com.

“Jance has been writing mysteries for more than 35 years, and she’s accumulated a large and enthusiastic fan base, all of whom should be delighted with this new one. Reynolds continues to be an engaging and resolute series lead, and it’s certainly nice to see Beaumont lend a hand.” —Booklist

"Jance is a born storyteller, tying family crises and crime into exciting tales of intrigue, danger and adventure. Unfinished Business is no exception, and I hope to catch up with Ali Reynolds in the very near future." —BookReporter

Book #16 of Ali Reynolds Series
By J.A. Jance
PRICE MAY VARY BY RETAILER