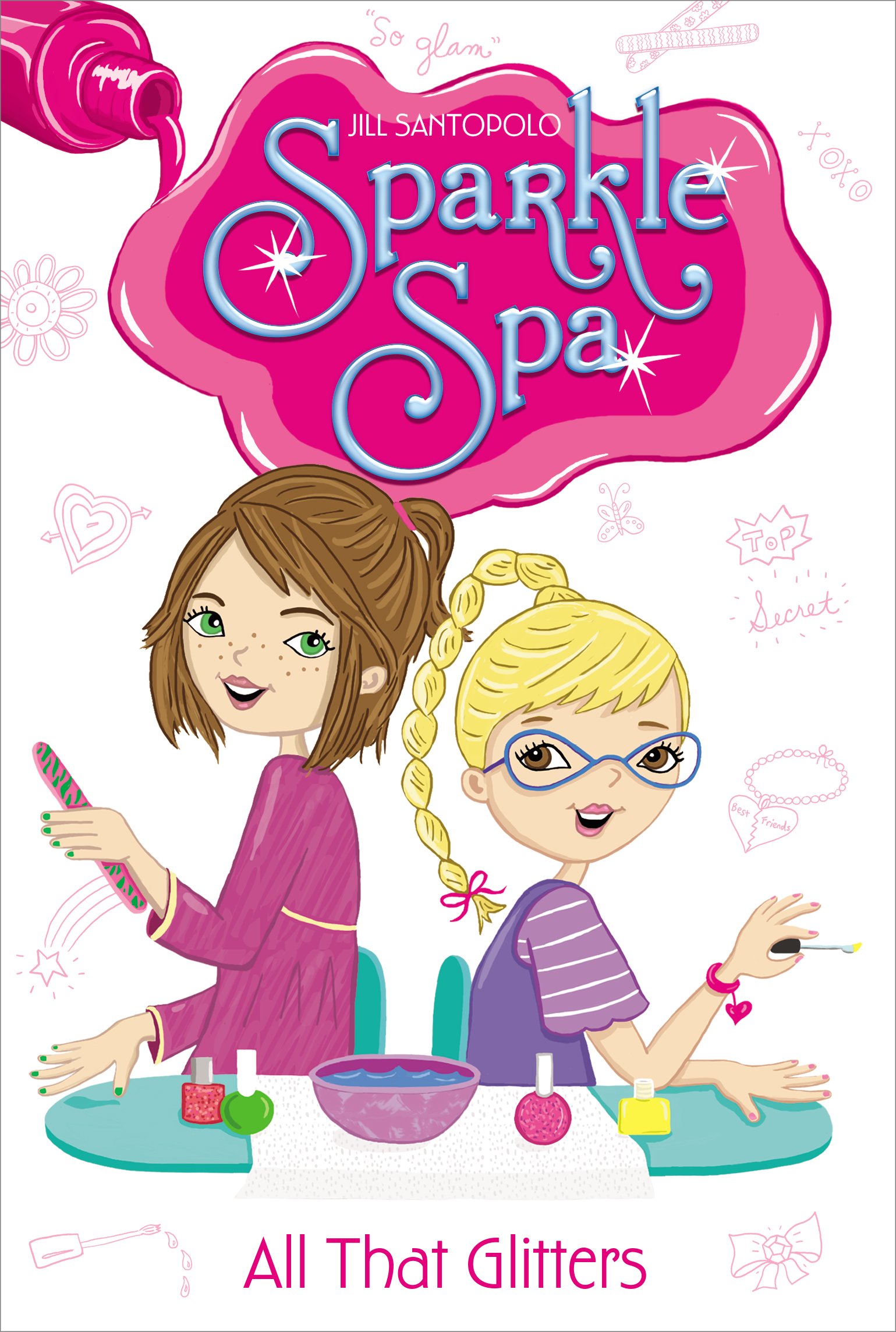 Aly and Brooke open a nail salon just for kids in this first book of the Sparkle Spa series!

Sisters Aly and Brooke love spending time at their mom’s popular and successful nail salon—it’s their “home away from home.” At the end of another incredibly busy day, Mom complains she is completely overwhelmed at work, even more so by all the kids who come to have manis and pedis. That’s when the sisters have a brilliant idea: Why don’t they open up a mini nail salon just for kids within Mom’s store? Their plan needs a bit of polish, but all signs point to success…

one Under Watermelon
The school bell rang, and Aly raced out the door, holding on tight to her backpack straps.

“Slow down!” a hall monitor shouted after her, but Aly didn’t listen. She made it to the steps at the front of the school in record time.

Her purple polka-dot watch said 3:07. Only eight minutes until Arnold the deliveryman arrived at her mom’s nail salon. Aly really wanted to be there to meet him. All the new sparkle colors were supposed to come that day, and Mom had promised that Aly and her sister, Brooke, could test them out the minute they arrived.

Where was Brooke? It took exactly five minutes to walk to the nail salon, which was three and a half blocks from Auden Elementary. Now Aly’s watch said 3:08. That meant they’d have two minutes to spare, if Brooke came right away.

Aly turned around, looking through the doorway into the school. When she squinted, she was pretty certain she saw Brooke, her long, braided ponytail swinging back and forth, skipping down the hall with three other third graders. This was not the time for skipping!

Brooke looked up, broke away from the other skipping girls, and ran toward Aly. When she got to the door, she was out of breath. “The sparkles! I almost forgot!” she said. “They must’ve skipped right out of my head!”

“How many minutes do we have?” Brooke asked, pushing her glasses up to the top of her nose.

Aly looked at her watch again. “Six!” she said. “Time for racewalking!”

The two girls took off, walking their fastest, pumping their arms back and forth to get extra speed. There was a man in their town who was an expert racewalker and always wore pink shorts and a pink T-shirt the exact color of Ready Set Flamingo nail polish. Aly and Brooke called him Mr. Flamingo and liked to walk the speedy way he did when they were in a hurry. Elbows were involved.

“Aly, did we end up ordering Cherry, Cherry Nice?” Brooke asked, panting a little as they racewalked past the pet store and the empty shop across from the salon that used to be the Candy Bar.

Aly knew all the colors by heart. She’d helped Mom put in the order. “No Cherry, Cherry Nice,” she said. “We got Strawberry Sunday, Under Watermelon, Lemon Aid, Orange You Pretty, and We the Purple.”

Brooke thought for a second. “I bet Lemon Aid will be the most popular.”

“Lemon Aid?” Aly asked. True Colors was only a few doors down now. Aly could see the sign—light blue with pink and purple curlicue letters. It was 3:14. One minute until Arnold!

Now that she was a fifth grader, Aly knew that just because you hadn’t been popular before didn’t mean you’d ever get a turn. Suzy Davis, who was the meanest girl in her whole grade, had never been popular. She’d just been mean. Ever since kindergarten. But then again, yellow was a color, and colors couldn’t be mean, so maybe it was different with nail polish.

The sisters reached the front door of True Colors at the exact same time Arnold did. He was holding a big box in his arms.

“Hi, Arnold! Are the sparkles here?” Brooke asked. She was tugging on her braid, which she always did when she was extra excited. Or extra nervous. This time, the pulling was definitely for excitement.

“Right here!” he said, bending over so Brooke could see the package. “Aly, can you sign for it, please?”

Aly nodded. It was a job her mom had given her last year, once she was able to write her name perfectly in script.

Arnold gave Aly his signing machine and a plastic thing that looked like a pen. She signed Alyssa Tanner on the screen in her most careful handwriting. Then he took back his machine and handed her the box.

Brooke jumped up and down. “Can I hold it, Aly? Pleeeaassee!” she begged.

“You know the rules,” Aly said. “Carrying boxes of nail polish is a fifth-grade-and-older job.”

Brooke picked up her backpack, which was covered in twirly pictures she’d drawn on with old nail polish colors. “I know. But it was worth a try,” she said as she held the door open for her sister.

Door opening was a third-grade job. Actually, it was a first-grade job, but it was one you could keep doing until you graduated from elementary school and turned a million years old. In the nail salon there were a lot of rules about what you could and couldn’t do based on how old you were.

The bells on top of the door jingled as it closed behind Aly. Everyone in the salon turned to look. The place was packed—even the six waiting-for-a-manicure chairs near the front window were filled.

“Hi, girls!” a few of the manicurists said.

“I have cookies for you two,” said Joan, who was Aly and Brooke’s favorite manicurist. “Raisin chocolate chip.” Joan wanted to open her own bakery one day.

“Hi, sweeties,” their mom said, looking up from manicure station number one. She carefully squeezed a rhinestone with a pair of tweezers, about to glue it on Miss Nina’s left pinkie nail. Miss Nina was one of the dog groomers at the pet store down the street and was a True Colors regular. She loved getting rhinestones on her pinkies.

“We got the new sparkles,” Brooke announced as she raced toward a room at the back of the salon.

“I signed for the package,” Aly added. She passed the row of five huge teal pedicure chairs—all filled—and walked around the ten manicure stations. Joan’s was number seven. All those stations were filled too.

“That’s great!” their mom called after them. “Pretzels and juice are in the back. And if you’re still hungry after that, you can each have one of Joan’s cookies.”

The bell jingled again, and more people walked in. Aly couldn’t believe how busy the salon was.

While Aly and Brooke munched on their pretzels—and Joan’s cookies—Brooke decided she wanted rainbow sparkle toes. One new color on each toe, starting with Strawberry Sunday on her big toe, followed by Orange You Pretty, Lemon Aid, We the Purple, and, on her baby toe, Under Watermelon.

It wasn’t a regular rainbow, because there was no blue or green and it ended in pink, but Aly could see how it might look cool. Still, she wanted to double-check. It was always good to double-check, just in case people changed their minds. Especially when they made fast decisions, like Brooke.

“Certain,” Brooke answered. She left her napkin and cup on the table and ran over to one of the old pedicure chairs in the corner. The blue-green leather on the chairs was worn out in some places, so Mom had them moved to the back. Brooke hopped into the chair on the right and slipped off her sandals, and Aly got started.

• Keep the side of your hand resting on something steady for wobble-free polishing.

• Wipe extra polish off on the side of the bottle before you paint a nail.

And Brooke had taught herself how to stay super still while she was getting her toes painted—even if Aly tickled her or dripped polish on her shorts.

“Sparkly?” Aly said, and they both started laughing.

Aly tucked her hair behind her ears. It had been cut too short to pull into a ponytail, perhaps not the best hairstyle for a manicurist. She kept worrying that it would fall in front of her eyes and that she’d paint Brooke’s skin instead of her nails. Maybe she should ask Mom to buy her some headbands.

After she’d applied a second coat, Aly admired Brooke’s toes herself. She had to admit, the rainbow look was awesome, especially with the sparkles.

“Let’s go see if there’s a spot at the drying station, Brookester.”

Brooke stood up and hobbled on her heels, following Aly out of the back room and into the main salon.

“I am the Princess of Sparkles,” Brooke announced. Brooke would say or do anything, Aly thought, to make people pay attention to her. Mostly Aly didn’t mind, but sometimes it could get annoying.

“Come over here and show me your royal toes,” Mom said. She was by the door, helping Miss Nina get her car keys out of her bag so she wouldn’t smudge her new manicure.

“Maybe you could do my nails next week.” Miss Nina winked at Aly. “You’re just as good as your mom.”

Aly smiled as Miss Nina left the salon. She was so ready to be a real manicurist, but Mom said she had to wait until she was eighteen. School had to be her main job until then. After that, she could paint nails. Or go to college. Or do both. Aly wasn’t sure what she would choose.

Aly looked up. Sitting on one of the chairs in the waiting area was Jenica Posner. The Jenica Posner—a sixth grader who was the very best soccer player on the girls’ team.

And this was the first time she had ever spoken to Aly.