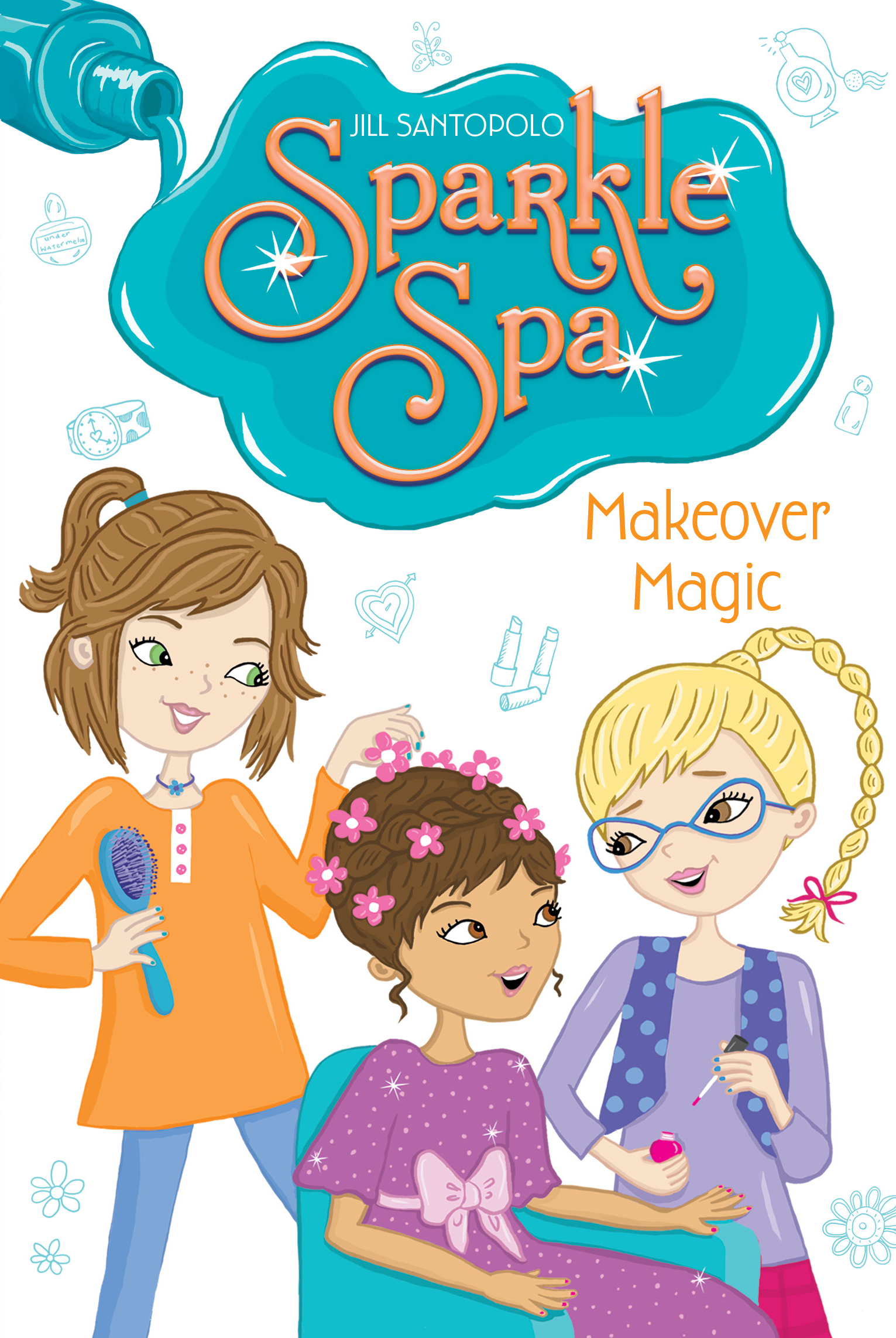 Aly and Brooke are up to their glittering fingertips in manis and pedis for the annual Fall Ball dance at Auden Elementary School. But when Princess Polish, a flashy new nail salon, opens right across the street, the sisters worry that Sparkle Spa’s days might be numbered!

one I’m So Grapeful
Aly Tanner glanced at her purple polka-dot watch. Uh-oh. She and her sister, Brooke, had only four minutes to unpack the new polish colors before their first appointments showed up at Sparkle Spa.

“Brooke,” Aly said, looking to where her sister was carefully reorganizing the bottles at the polish display, “we’ve got to go a little faster. Jenica and Bethany are going to be here for their pedicures soon. And then the rest of the soccer team will be coming in all afternoon.”

Sparkly, the girls’ tiny dog, who lived in Sparkle Spa during the day and at home with them at night, barked in agreement.

“I know, I know,” Brooke said. “But I just can’t decide if I’m So Grapeful should go before Plum Delicious or after We the Purple. It’s hard to tell how the color’s going to come out on people’s nails. And I want the display to be absolutely right so that no one thinks they’re getting one color and ends up getting another.”

Aly smiled. Brooke’s attention to detail was partially what made Sparkle Spa look so beautiful—she’d been in charge of picking the paintings on the walls, the colorful pillows in the nail-drying and bracelet-making area, and the huge rainbow display of polish. Aly quickly opened up a bottle of I’m So Grapeful and brushed it onto her thumbnail. Then she blew on it and added a second coat. “Does this help?” she asked. “Can you tell better now?”

Brooke’s eyes lit up. “Yes. Now I know exactly where it should go.” She slid the bottle in right next to Purple People Eater and went on to the next color.

“You know,” Aly said, handing Brooke Cider Donuts, which was a very light orange, and Apple Crispy, which was a bright red, “I think later we should pull out all the colors that have to do with fall stuff. You know, for the Sixth-Grade Fall Ball.”

“Okay,” said Brooke. “And maybe we can come up with some special Fall Ball combinations.”

Brooke nodded as she put a bright yellowish-gold polish called Candy Corn on the Cob next to Lemon Aid. Sparkle Spa, which was really just the back room of True Colors, Aly and Brooke’s mom’s nail salon, had a lot of rules. One of them was that the girls could be open only two days after school and one day during the weekend. That was so they could still do homework and hang out with their friends.

“I can’t wait until I’m in sixth grade and can go to the Fall Ball,” Brooke said, reaching for a silvery Very Ice Try. “Only three more years.”

Aly closed the box and put it in the corner with the rest of the extra polish bottles. “And only two more years until you get to decorate. I can’t believe I get to be a decorator this year.”

The Sixth-Grade Fall Ball was one of the biggest events of the school year at Auden Elementary. The fifth graders always decorated the gym for the dance. It was tradition. It was also tradition that two sixth graders, one girl and one boy, got trophies for being “On the Ball.” They were chosen by teachers and always had to be kids who were good students and good friends and gave back to the school community. Aly wondered who was going to get the trophies this year.

“Are you guys open yet?” a voice called from the Sparkle Spa doorway. It was Jenica Posner:

• the most popular girl at Auden Elementary

• and Sparkle Spa’s very first customer, back when Aly and Brooke started the salon a little more than a month ago.

Jenica was also the person Aly would vote for to win one of the On the Ball trophies if winners were chosen by students instead of teachers.

Jenica was more than just a great soccer player. She had also created an after-school program called Superstar Sports. Two days a week, she and a group of volunteers helped the younger kids at school learn how to play soccer and kickball and practice things like teamwork and good sportsmanship.

“We’re open!” Brooke said. “And we have lots of new colors. The polish company is really pushing a fall theme this year.”

“We thought some of these would be perfect for the ball,” Aly added, securing her chin-length hair in a half-up so it wouldn’t fall in her face while she was polishing.

“But you’re still going to get the rainbow sparkle pedicure today, right?” Brooke said, handing over a bottle of Cider Donuts.

“Absolutely,” Jenica answered, slipping off her sneakers and socks. “Otherwise, we might kill our winning streak.” Ever since Jenica and the other soccer players had started getting rainbow sparkle pedicures, they’d won every single soccer game they’d played. The girls said it was because their feet had sparkle power, but Aly was pretty sure it was just because they were really good soccer players.

Still, she liked having so many regular customers at Sparkle Spa and especially liked hanging out with Jenica Posner. Sometimes she still couldn’t believe that the two of them were friends.

“But,” Jenica continued, jumping up into a pedicure chair, “I’m thinking I might get something different for the Fall Ball. Because I just bought my shoes—silver sandals with little heels. It’s the first time I’m allowed to wear heels.”

“Really?” Bethany asked, walking into Sparkle Spa. “My glamma got me my first pair of high heels when I was six. But they were for dress-up only.”

“Yeah, ‘glamorous’ plus ‘grandma’ equals ‘glamma,’ ” Bethany said. She sat down in the chair next to Jenica and unbuckled her sandals, and Aly and Brooke started the sparkle pedicures. “My glamma is super-glamorous. She was even in a television commercial once.”

Aly thought about her own grandma, who wore jeans and sweatshirts and was not very glamorous at all. She’d never been on TV, either. Aly decided she liked it that way.

“Which boy do you think is going to get the On the Ball trophy?” Bethany asked.

“Everyone thinks it’s going to be Lucas,” Jenica answered. Aly had never spoken to Lucas Grant, but she knew who he was. He played basketball and the trumpet, and all the girls called him “Cute Lucas” because, well, he was really handsome. He’d also started a program called Reading Buddies, where sixth graders went into the kindergarten classes to read to the kids. It was a pretty cool program, and Aly hoped it would still be going next year so she could volunteer for it.

“I think it’s going to be Oliver,” Bethany replied, looking at her toes.

“That’s just because you like him,” Jenica said, rolling her eyes.

“Well, he’s very likeable!” Bethany answered. Aly was pretty sure she was blushing. “But still, I think he has a good chance. He was the one who got the cafeteria to donate its extra food to homeless shelters, after all. That does more for the community than reading to little kids.”

Just as Aly and Brooke were applying the top coat of clear polish to the rainbow sparkle pedicures, Mia, their next appointment, ran into the spa. Anjuli, the team’s goalie, was right behind her.

“Guys,” Mia said dramatically, standing in the middle of the doorframe, “I have crazy news.”

“What?” Brooke asked, whipping around to face Mia.

Aly twisted her head to look at Mia too.

From his fenced-in corner, Sparkly even turned to see what was happening.

“Princess Polish just opened!” Mia said. “Can you believe it?”

Sparkly whimpered and turned back around.

Aly and Brooke exchanged a Secret Sister Eye Message that meant: Oh no!

Princess Polish was a new nail salon across the street that’d had a COMING SOON sign in the window for the last month or so. It had worried Aly and Brooke’s mom for a while, but then it seemed like it might never open. Now it had. This was not good news for Sparkle Spa. Or for Mom’s salon, True Colors.

“Does it look any good?” Bethany asked. “My cousin told me there’s a Princess Polish in her town and it’s really awesome.”

“Bethany!” Jenica elbowed her. “It won’t be any better than Sparkle Spa.”

“Sheesh,” Bethany said, rubbing her arm. “I was just asking.”

Aly had to bite her cheek not to smile. She loved how loyal a customer Jenica was.

“But I didn’t even tell you the craziest part yet!” Mia still hadn’t moved from the doorframe, and Anjuli was still behind her. “They’re offering a free Princess Pedicure to anyone under thirteen who goes into the salon! And a manicure, too, if you’re going to Auden’s Fall Ball. How did they even know about our school’s dance?”

Aly gulped. This was even worse news. It wasn’t like they charged a lot at Sparkle Spa; in fact, that was one of Mom’s rules—there was no set price, just a donation jar for customers to pay whatever they could afford. Then, each time the jar reached $100, Aly and Brooke gave the money to a worthy cause. So far, they’d donated money to Paws for Love, an animal shelter on Taft Street. The jar was getting kind of full again. They’d have to pick another charity soon.

Jenica glared at them. Then she cleared her throat. “Aly, Brooke, I’d like to book my appointment for a manicure and pedicure for the Fall Ball. Here at Sparkle Spa. Can I book it now?”

Aly smiled at Jenica. She let out a breath she didn’t know she was holding. “You definitely can,” she said, pulling out the new appointment book Mom had gotten them just for Sparkle Spa. Mom reviewed it every week to make sure there weren’t too many appointments for the girls to handle. “When would you like to come?”

“Next Saturday morning at eleven,” Jenica answered, after thinking for a bit. “We have an early soccer game, but I’ll be free after that.”

“You got it,” Aly said, writing her into the book.

“Me too,” Anjuli said from where she stood behind Mia. “I’ll come at eleven thirty.”

“And me,” Mia said after Aly had finished writing. “I’ll come at the same time as Anjuli.”

Bethany didn’t say anything, though, no matter how hard Jenica glared at her. And if Bethany, one of their regulars, wanted to check out Princess Polish, Aly knew they had a problem brewing. A big one.