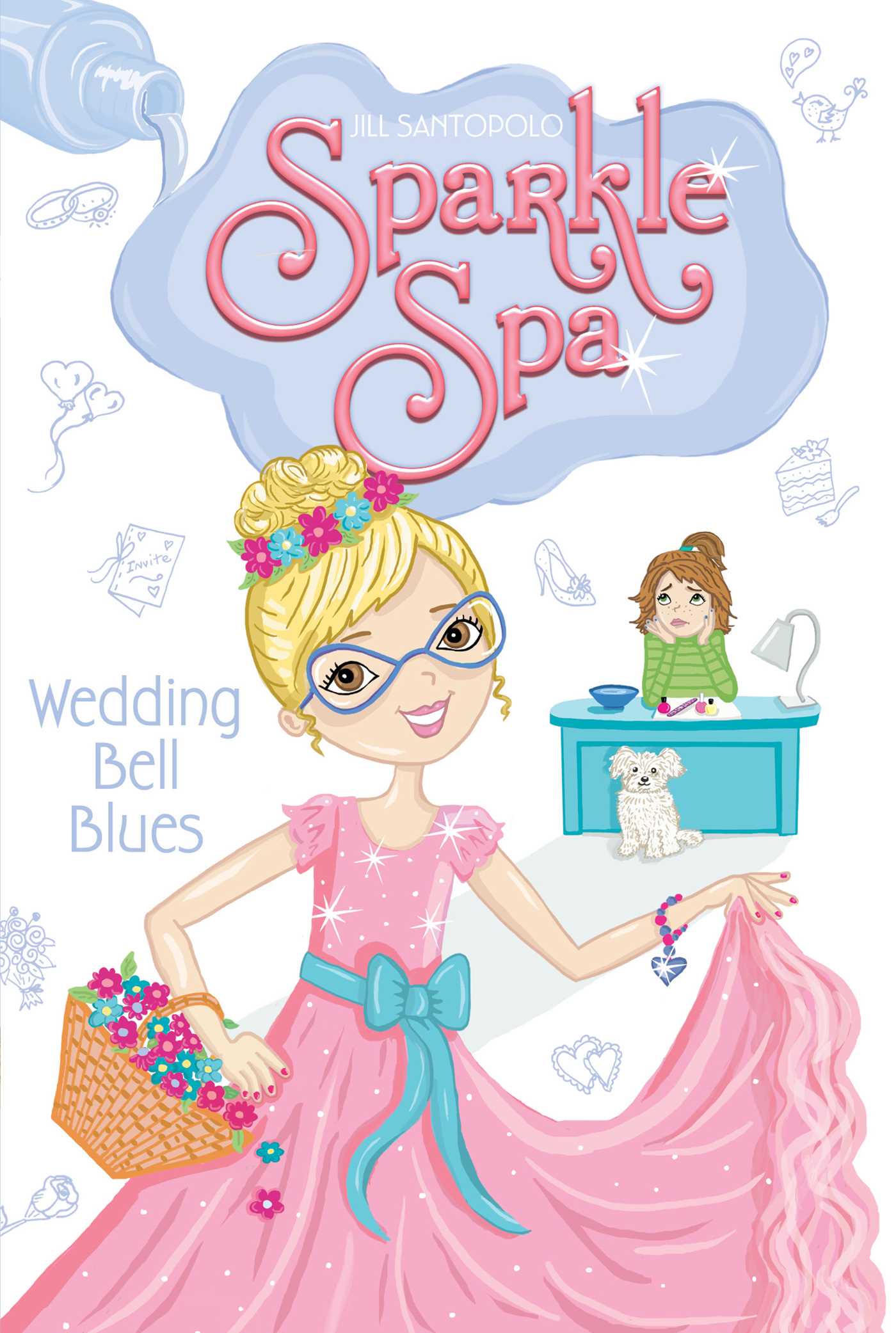 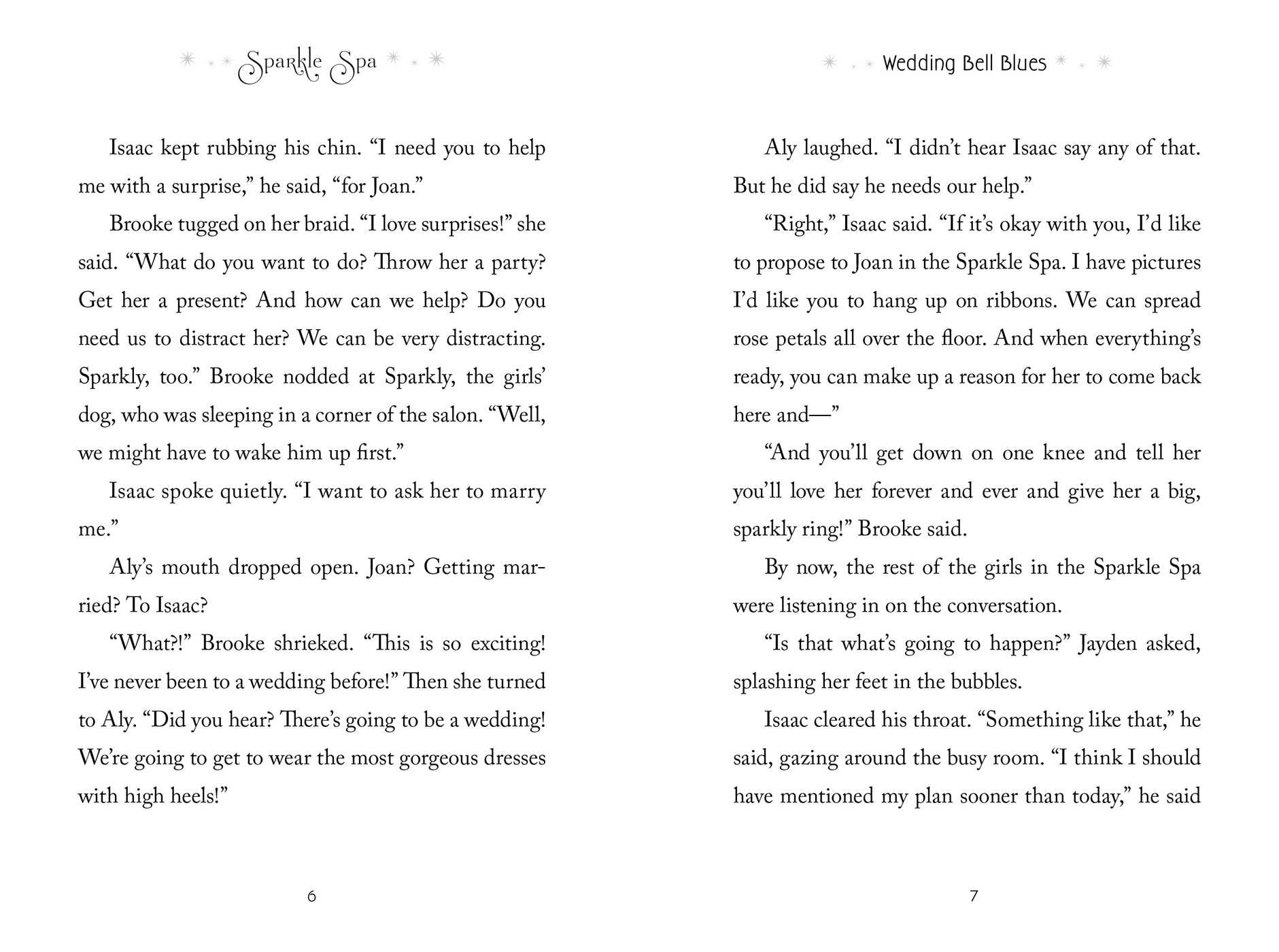 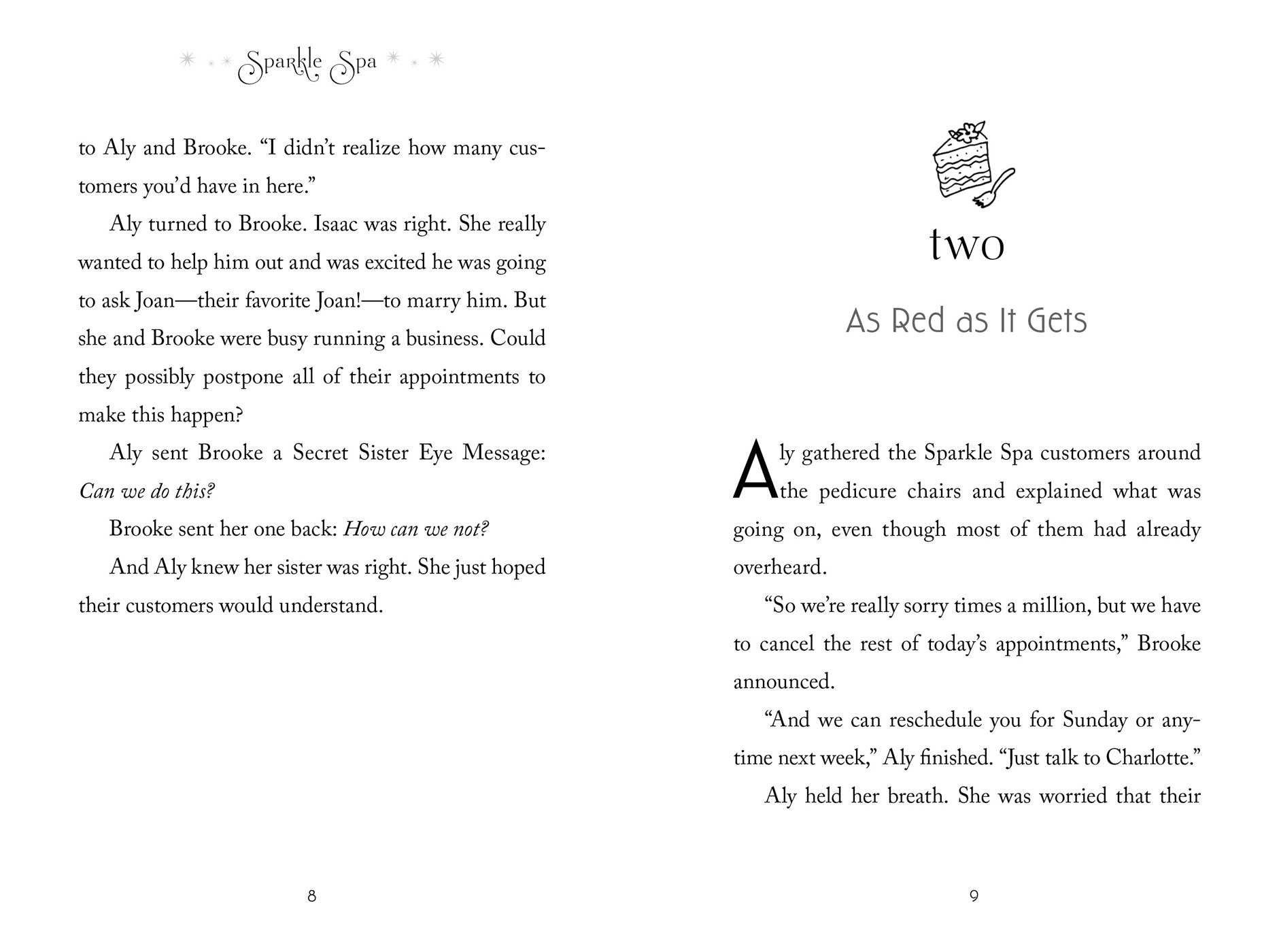 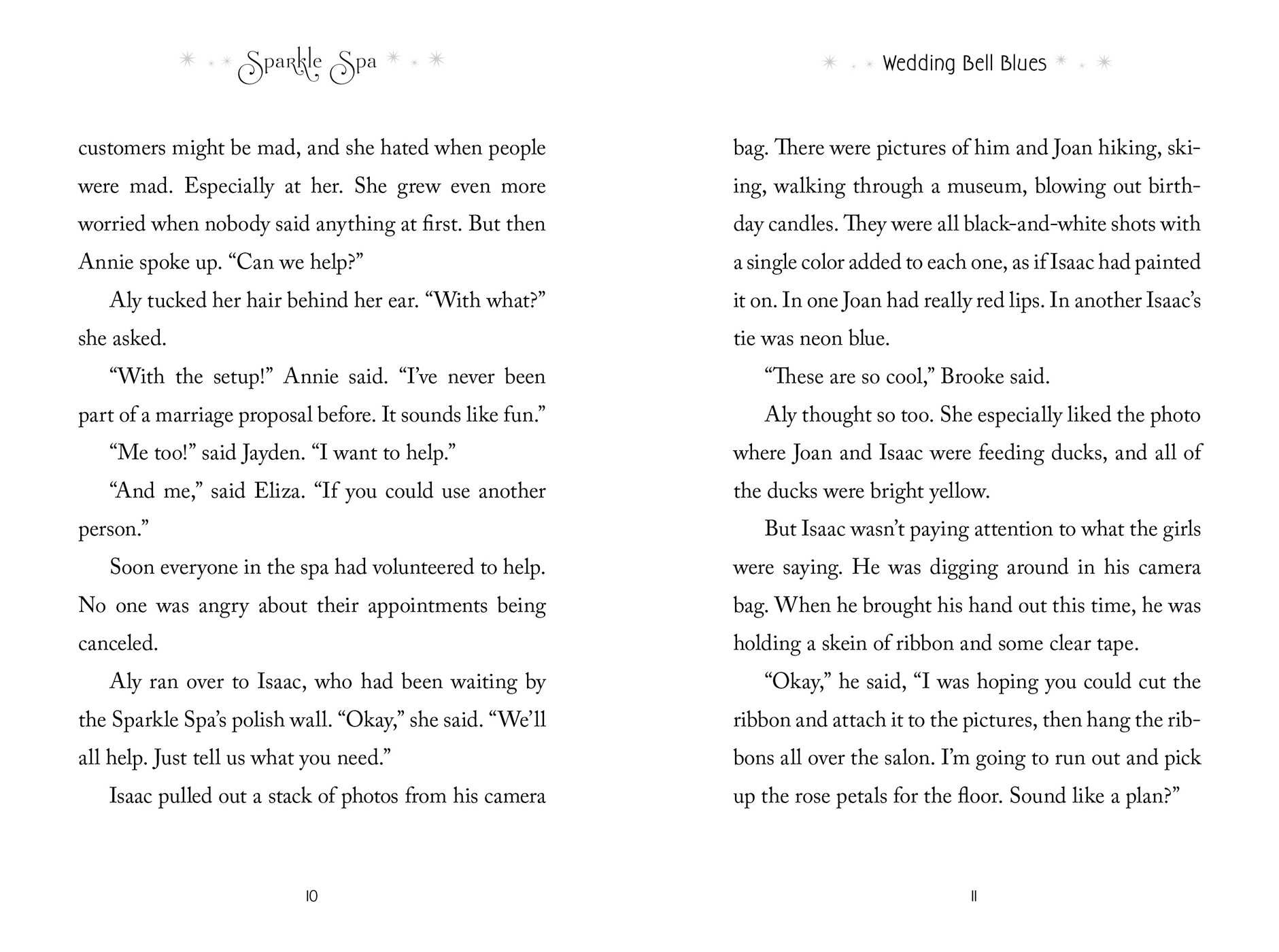 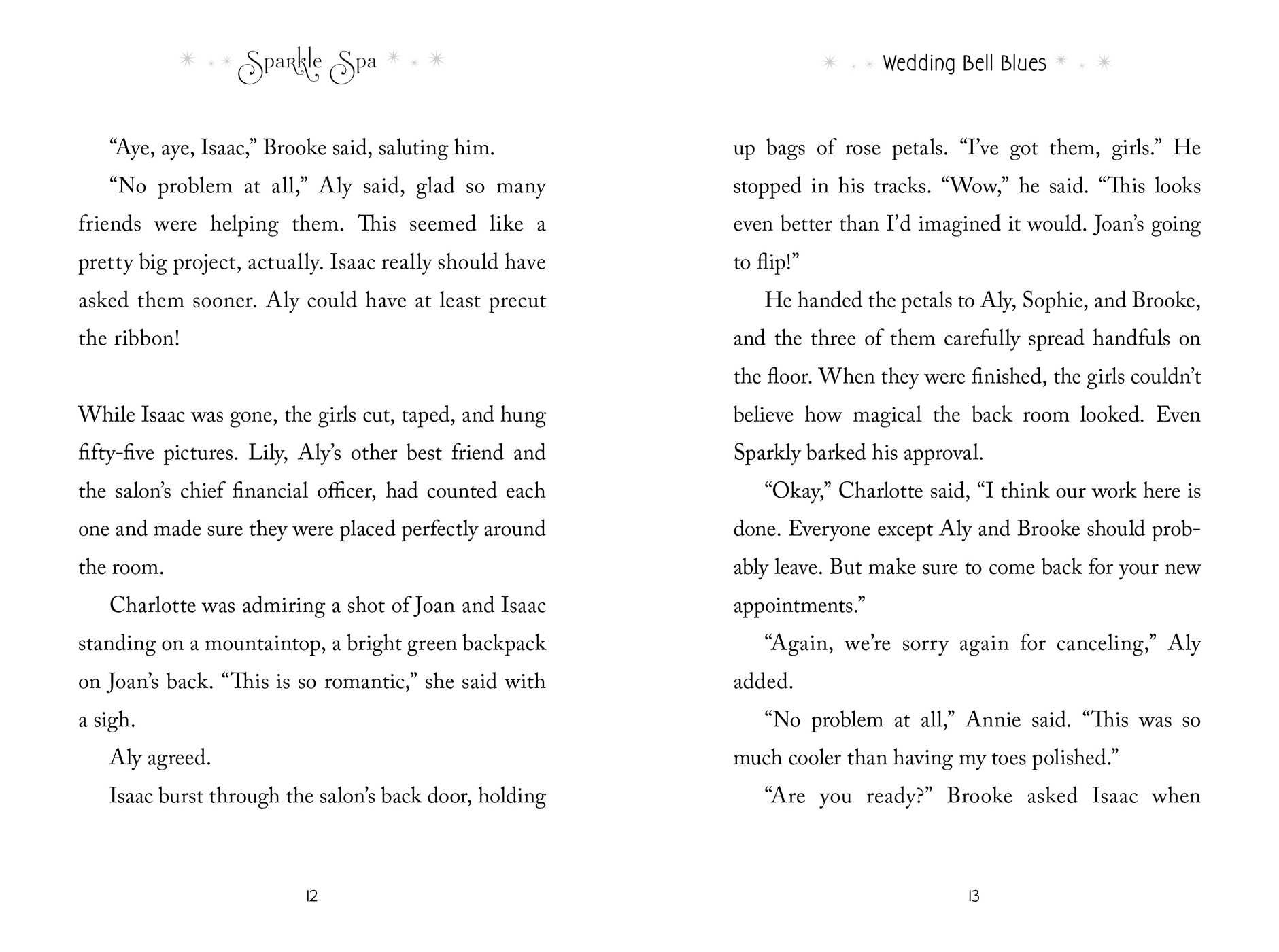 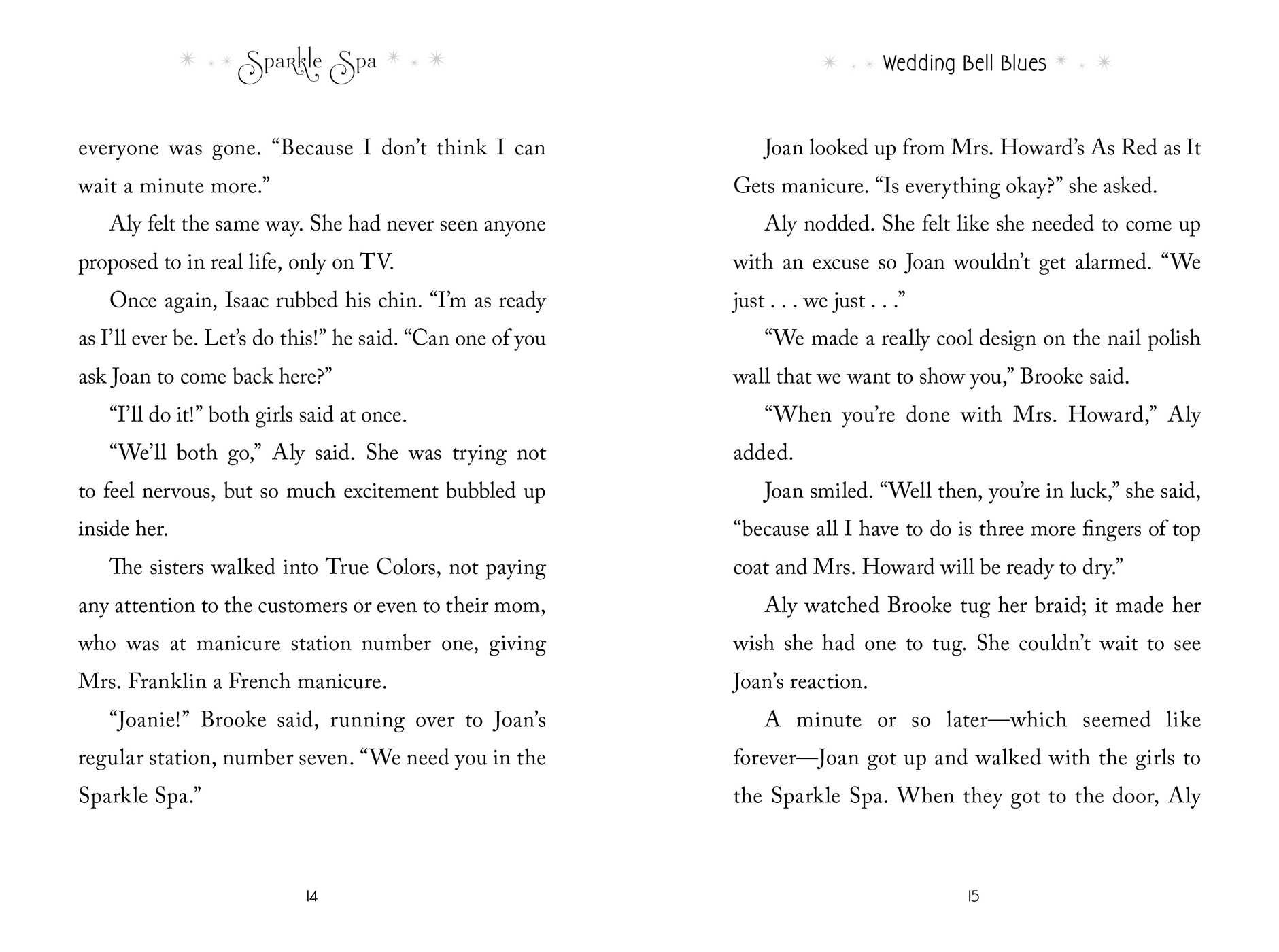 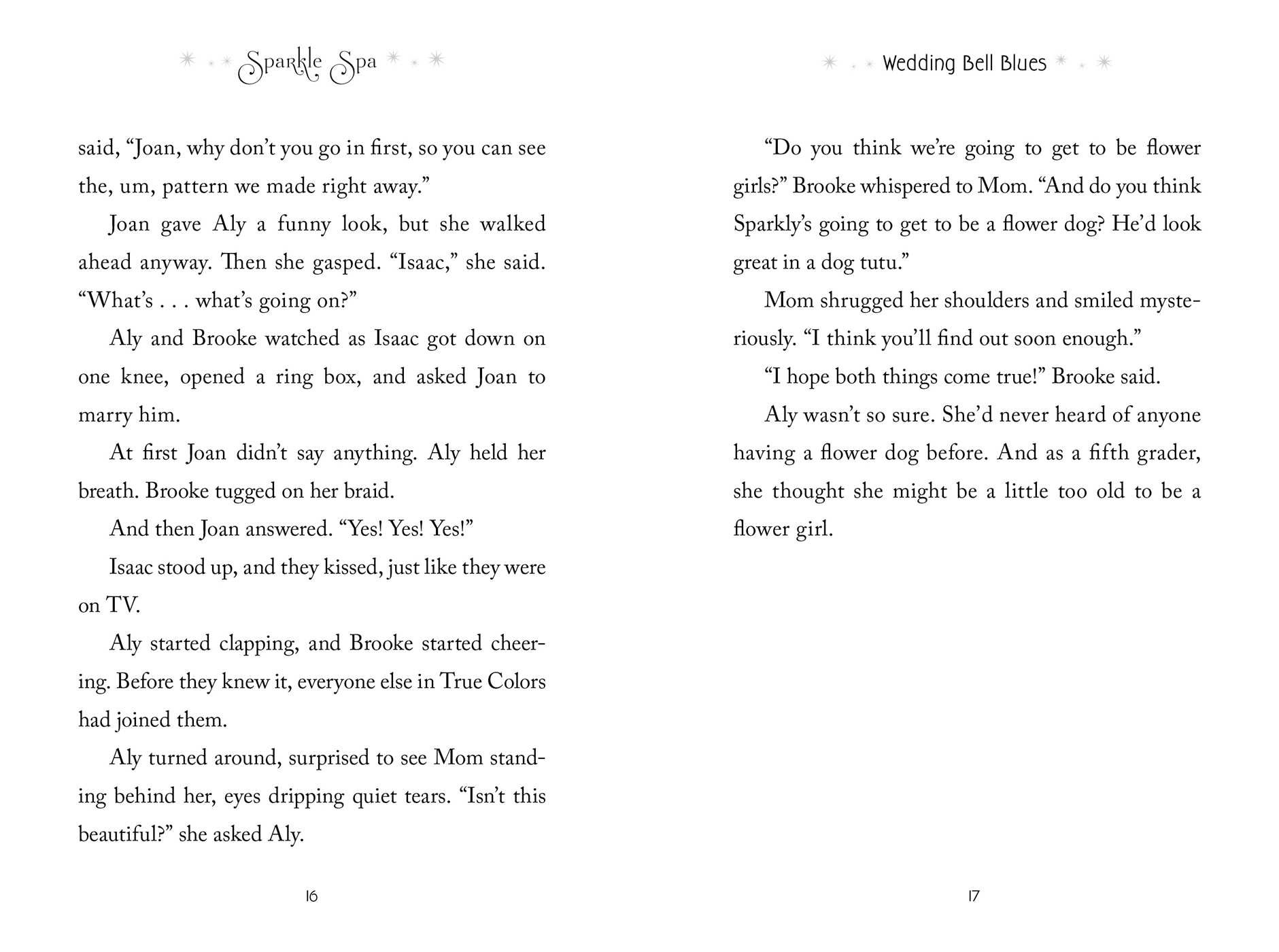 Wedding bells are ringing and the Tanner sisters are excited to be involved, but will the Sparkle Spa make it to the wedding after one sister is left out of the fun?

Aly and Brooke Tanner are beyond excited! Joan, their favorite True Color’s manicurist, is getting married! Aly and Brooke want to be involved in every sparkly step, but when only one sister is going to be the Flower Girl, this wedding starts to feel less fun. Will Brooke and Aly figure out a way to make Joan’s happily-ever-after happy for everyone?

one Really Rosie
Aly Tanner was up to her elbows in suds. Her sister, Brooke, had tipped some extra soap into the pedicure basin, and now there were way more bubbles than usual covering Annie Wu’s feet.

Brooke looked over from the pedicure she was giving to Annie’s stepsister, Jayden Smith. “Oh no! I think I might have overdone it with the bubbles!” she said, laughing. “Sorry, Aly.”

Aly smiled at her sister. A few too many bubbles never hurt anyone.

“Can you overdo it for me too?” Jayden asked. She was a first grader and visited the Sparkle Spa pretty often.

Aly pulled one of her hands out of the water and leaned over to add more soap to Jayden’s basin. Soon Brooke had bubbles up to her elbows as well.

“I know this might not be the best business plan,” Brooke said to Aly, “because it’ll mean we need to buy more soap solution. But if it makes our customers laugh, maybe we should always add extra bubbles.”

Aly laughed at the idea of the Sparkle Spa covered in bubbles. “Let’s see how much it would cost, Brookester,” she said.

Aly and Brooke were the co–chief executive officers of the Sparkle Spa—they were in charge of the salon and everything that happened in it. That included bubble purchasing.

“Did you girls choose colors yet?” Charlotte asked Annie and Jayden.

Charlotte was a fifth grader, like Aly, and one of Aly’s two best friends. She was also the chief operating officer of the Sparkle Spa and made sure the spa ran smoothly and was organized.

“I did,” Annie and Jayden said at the same time, holding up their nail polish bottles. Annie’s was a bright red called Really Rosie, and Jadyen’s was a dark blue called Good Knight.

Charlotte looked at her clipboard and at the girls sitting in the jewelry-making area. “Hannah’s missing,” she said to Aly.

“I forgot to tell you,” Aly answered. “Hannah had to cancel her appointment. Her phone was taken away in music class, and she needed to wait at school until one of her parents could come to get it back.”

“Oh no,” Sophie said. She was Brooke’s best friend and the only other third grader who worked at the Sparkle Spa. She was a manicurist—a really good one—and was in the middle of a sparkly Lemon Aid manicure on a fourth grader named Eliza.

As Aly lifted Annie’s feet out of the warm water, she looked around the Sparkle Spa and smiled. When she and Brooke had started the salon at the beginning of the school year, they had no idea how awesome it was going to be, with so many kids coming by to get their nails done, and then staying because it was fun to hang out.

Before Aly could open the Really Rosie polish, there was a knock against the door frame that led from True Colors, Aly and Brooke’s mom’s nail salon, into the Sparkle Spa in the back room.

Aly turned around quickly. Brooke turned too, and when she saw who it was, she jumped up. “Isaac!” she screeched, and ran over to him.

Isaac was a local photographer who’d taken pictures of Sparkle Spa events. He’d been visiting True Colors a lot recently because he was dating Joan, Aly and Brooke’s favorite manicurist and their mom’s best friend.

Isaac cleared his throat. “Actually,” he said, “I need your help.” Then he noticed the Sparkle Spa customers and employees. “Everyone’s help, if you wouldn’t mind.”

Aly turned to Annie. “Could you hold on a sec?” she asked, walking over to Brooke and Isaac. Isaac rubbed his hand over the stubble on his chin, like he was nervous about something. “What’s going on?” she asked.

Isaac kept rubbing his chin. “I need you to help me with a surprise,” he said, “for Joan.”

Brooke tugged on her braid. “I love surprises!” she said. “What do you want to do? Throw her a party? Get her a present? And how can we help? Do you need us to distract her? We can be very distracting. Sparkly, too.” Brooke nodded at Sparkly, the girls’ dog, who was sleeping in a corner of the salon. “Well, we might have to wake him up first.”

Isaac spoke quietly. “I want to ask her to marry me.”

“What?!” Brooke shrieked. “This is so exciting! I’ve never been to a wedding before!” Then she turned to Aly. “Did you hear? There’s going to be a wedding! We’re going to get to wear the most gorgeous dresses with high heels!”

Aly laughed. “I didn’t hear Isaac say any of that. But he did say he needs our help.”

“Right,” Isaac said. “If it’s okay with you, I’d like to propose to Joan in the Sparkle Spa. I have pictures I’d like you to hang up on ribbons. We can spread rose petals all over the floor. And when everything’s ready, you can make up a reason for her to come back here and—”

“And you’ll get down on one knee and tell her you’ll love her forever and ever and give her a big, sparkly ring!” Brooke said.

By now, the rest of the girls in the Sparkle Spa were listening in on the conversation.

“Is that what’s going to happen?” Jayden asked, splashing her feet in the bubbles.

Isaac cleared his throat. “Something like that,” he said, gazing around the busy room. “I think I should have mentioned my plan sooner than today,” he said to Aly and Brooke. “I didn’t realize how many customers you’d have in here.”

Aly turned to Brooke. Isaac was right. She really wanted to help him out and was excited he was going to ask Joan—their favorite Joan!—to marry him. But she and Brooke were busy running a business. Could they possibly postpone all of their appointments to make this happen?

Aly sent Brooke a Secret Sister Eye Message: Can we do this?

Brooke sent her one back: How can we not?

And Aly knew her sister was right. She just hoped their customers would understand.