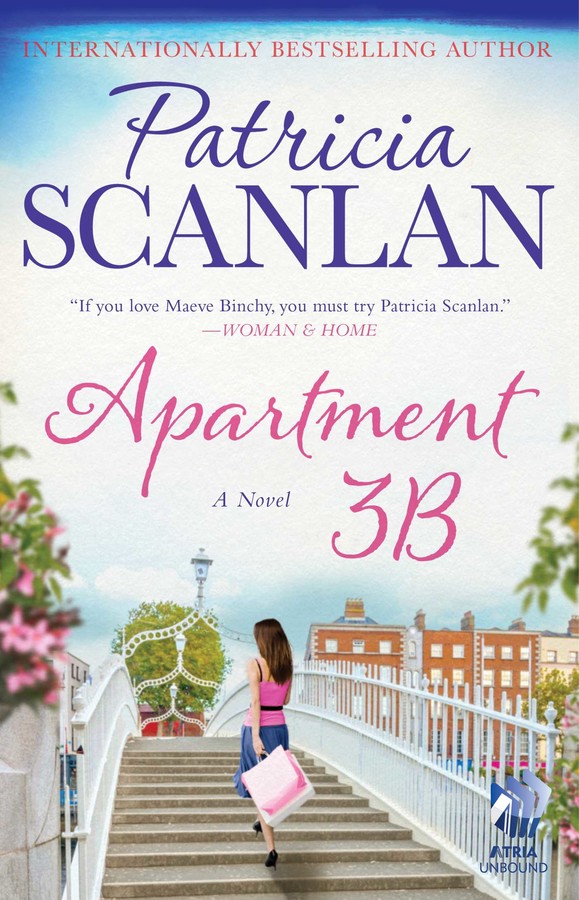 In the tradition of Maeve Binchy, internationally bestselling author Patricia Scanlan takes readers on a dazzling ride where Dublin’s elite will stop at nothing to be the sole owner of the city’s most luxurious apartment.

The best address in Dublin is for sale!

Its owner, successful artist Liz Lacey, is set to make big changes in her life. She is selling the luxurious apartment that no longer feels like home.

In great excitement, Dublin’s elite flock to view her apartment: sophisticated Lainey Conroy; plucky Claire Moran, who has triumphed over adversity; ambitious but tender-hearted Dominic Kent. And Cecily, sister-in-law to Lainey, who will stop at nothing in her plan for revenge.

Who will emerge victorious? One thing is for certain; there will be many upsets along the way…

Full of warmth and wit, Apartment 3B is an engrossing family drama from the bestselling author of With All My Love and A Time for Friends.

Apartment 3B
‘Where’s the file for Apartment 3B?’ Hilary Purcell muttered to herself, knowing that His Nibs, as she disrespectfully referred to her boss, would be requiring it later. Having located it, she placed it on the desk in front of her and returned to her typing. The phone rang.

‘O’Malley, Costello and Ryan. Can I help you?’ Hilary cursed silently as she made yet another typing error. Down the phone an angry tirade assaulted her ears. ‘Just one moment. I’ll put you through to Mr O’Malley,’ she said sweetly. She was damned if she was going to deal with the angry client on the other end of the phone. Typical, of course. On their first meeting John O’Malley had told the client that the firm took 2 per cent of the selling price. He omitted to mention that the 2 per cent did not include the price of the boards and photograph of the property and the advertising. Not to mention the 21 per cent VAT. So the poor unfortunate on the other end of the phone had got a much heftier bill than she had budgeted for.

Hilary had had so many phone calls from shocked and irate vendors that she had decided to let the partners concerned handle them. Why should she have to listen to such abuse on the pittance she was being paid! If only she could win the Lotto! Hilary propped her head on her chin and a faraway look came into her eyes. She’d pay the mortgage on her parents’ house, buy a villa in the south of France for herself, give her brothers a couple of thousand each, and tell John O’Malley exactly where he could stuff his job. She wouldn’t even give him a day’s notice. She smiled at the thought. She might even misplace a few files, make a couple of phone calls to her brother in the States and be positively rude to the clients. Her humour began to improve immensely. Tomorrow she was definitely going to buy a few lottery tickets and if she won she wasn’t going to tell a soul except the family. She certainly didn’t want to be inundated with begging letters!

‘Miss Purcell!’ Her boss’s suave tones interrupted her reverie. ‘I want you to ring Mr White and tell him that we’ve accepted his offer for the Santry property. Then ring Miss Carey and tell her that someone else has put in a bid of a thousand extra for the house in Donnycarney.’

‘But I thought we’d sold the Santry house to the Morrisseys,’ she said, thinking he had made a mistake.

‘Contracts weren’t signed. We’ll return their deposit to their solicitor,’ he replied briskly, turning to stride back into his office.

Swine! she thought. He’d gone and gazumped the Morrisseys and they’d had their heart and soul set on that house in Santry. And she knew quite well that no-one else had put in an offer for the house in Donnycarney; it was just a ploy to make Miss Carey pay an extra thousand. On second thoughts, if she won the Lotto she would buy out O’Malley, Costello and Ryan, through a broker of course, so they wouldn’t be aware of her identity. And when the firm was finally hers, she’d call a meeting and personally sack her boss. This exquisite thought got her through the morning until her tea-break. Then John O’Malley appeared beside her again.

‘Miss Purcell . . . ’ How she detested that voice! ‘I want the file on Apartment 3B in Mountain View, if you please. I presume you contacted the interested parties to tell them what time the viewing was arranged for?’

‘Yes,’ she said coldly, handing him the file.

‘And you’ve informed Mrs Lacey that I’ll be there fifteen minutes beforehand?’

‘Yes, Mr O’Malley,’ Hilary almost hissed. Hadn’t she been working with him long enough to know what to do when there was a viewing.

‘How many have confirmed?’ He perused the file. ‘Hmm . . . Hugh Cassidy, the TV personality. Mrs Claire Moran, Mrs Cecily Clarke-Conroy, Ms Lainey Conroy. Are they related?’

‘I don’t know really. A Mr Dominic Kent made all the arrangements for Ms Conroy.’ Hilary managed to refrain from informing her boss that, unlike him, she was not inquisitive enough to go into clients’ personal histories on the phone. Honestly, John O’Malley would ask you what you’d had for your breakfast! If Mrs Clarke-Conroy and Ms Lainey Conroy were related, so what! Maybe the two of them were having an affair with the man called Dominic Kent. Anything was possible. There were plenty of men buying apartments and town-houses for their mistresses. You saw a lot of goings-on in the estate agency business. She wouldn’t put it past John O’Malley to indulge in a bit of blackmail. The crook that he was! She knew that he madly fancied Liz Lacey, the famous artist who was selling Apartment 3B. Hilary got the impression that his interest wasn’t reciprocated. He thought he was a bit of a ladies’ man. But Hilary wouldn’t touch him with a ten-foot bargepole. Just the thought of his marble-like hands with the wet fishy handshake gave her the shudders. And he had a way of looking at you and a way of making remarks that were very close to sexual harassment. If he didn’t stop annoying her, she would report him! It would be worth it to knock that smirk off his face.

‘Very interesting indeed.’ Her boss gave a supercilious smile. ‘I’m off to sell the apartment. I’ll be back some time in the afternoon. Take my messages. Goodbye, Miss Purcell. Be good!’

‘Goodbye and good riddance!’ Hilary spat as she watched her boss get into his BMW. At least she had her office to herself for a while. She hoped that selling Apartment 3B would take up a good chunk of his time as, unfortunately, he had no other appointments that afternoon and would be under her feet for the rest of the day. If Tim Costello was out, she’d nip in next door and have a chat with his secretary.

Who would buy the apartment, she wondered. Hugh Cassidy? He was a bit of all right. Ireland’s most eligible bachelor, even more popular than Pat Kenny. Claire Moran from Drumcondra? She’d sounded nice on the phone – a gentle sort. That Clarke-Conroy one had sounded like a right stuck-up bitch with her posh accent. She knew all about the percentages and the VAT and the extra costs. John O’Malley wouldn’t mislead her. And Dominic Kent! He sounded like a right dish. With that absolutely gorgeous deep voice. Whoever bought 3B, she’d most likely meet him or her as they’d have to sign papers. It would be very interesting indeed to see which of the viewers would become the new owner.