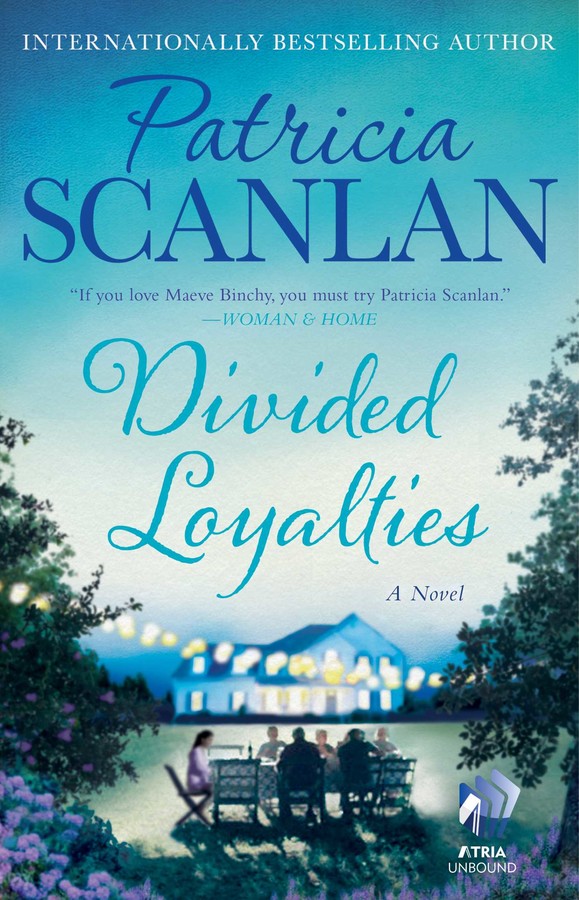 From internationally bestselling author Patricia Scanlan comes a delightful story about the struggles and victories of marriage, and the true meaning of family.

Shauna and Greg’s marriage is under pressure. She wants another baby but he doesn’t. She also has to endure her obnoxious in-laws, The Freeloaders: Della, Eddie, and their spoiled kids. Shauna’s glad to be moving abroad—but three thousand miles won’t stop the determined Della.

Meanwhile Carrie, Shauna’s sister, can’t help feeling put upon. The burden of looking after their elderly father rests on her now and she’s fed up. Even though she loves her siblings, resentment builds. Will Carrie put her foot down and stand up for herself?

The last Christmas the family got together was a disaster. Now, as another get-together approaches, can they final turn things around and put the past behind them?

Divided Loyalties 1
‘Let’s try for another baby?’ Shauna Cassidy fingered the flat, full pack of her contraceptive pill and scowled resentfully. Her husband, Greg, groaned from his side of the bed.

‘Aw, Shauna, I don’t know. Chloe’s been such a handful since she was born, and besides, she’s only two.’

‘Don’t say that,’ Shauna flared indignantly, her heart sinking at his negativity. This wasn’t the first time that she’d broached the subject of trying for another baby. For the last couple of months she’d become increasingly broody. She wanted Chloe to have a brother or sister close in age to her but, so far, Greg wasn’t having any of it.

‘Come on, Shauna.’ He yawned and nearly gave himself lockjaw. ‘She had colic for the first year. And that bloody reflux. Not to talk about the temperatures every time she’s getting a tooth. She rarely sleeps a full night, we’ve only just started to have a social life again and we’re moving to the Emirates in January. Your timing is lousy.’

As if on cue, a fretful squawk from the room across the landing turned into a heart-rending howl. ‘And you want another one?’ Greg muttered, turning on his side and pulling the duvet up over his ears. Shauna glared down at him.

‘Come on, Greg! I don’t want to start another month on the Pill; we need to talk about this sooner rather than later.’

‘Not tonight. I’m knackered. For God’s sake go in to her or we’ll never get to sleep,’ he growled.

‘Ah you’re always knackered,’ she said exasperatedly as she threw back the duvet and hurried into the next room to comfort their little daughter.

Greg felt the tension begin to seep out of his body as he stretched his limbs and heard Chloe’s sobs peter out as his wife’s soft crooning soothed her. Was the woman mad? he wondered drowsily. Imagine two babies in the house, screeching and yelling. He loved his daughter but she’d completely disrupted their lives. Even Shauna couldn’t deny that. They rarely had a night out together. Everything had to be arranged around feeding times and nap times. It was a pain in the butt. There were times he even felt that Shauna was so completely focused on Chloe and her needs that she’d hardly notice if he wasn’t around any more. He remembered how she’d always made a fuss of him and danced attendance on him before she’d got pregnant. Those days were a distant memory.

Perhaps it would all change when they went back out to the Gulf. He was really looking forward to going to work in the Emirates, despite the instability in the region. He’d kept in contact with people he’d known and they all assured him that life went on very much as normal in spite of the volatile political situation. Shauna felt a little jittery sometimes, especially when the bombs had gone off in the residential compounds, but Greg had pointed out that Abu Dhabi was much more stable than Saudi and far more cosmopolitan. The war in Iraq wasn’t having such an impact there. Look at all the people going out on holidays and buying property in Dubai, which was only a couple of hours’ drive down the highway, he’d pointed out reassuringly. If they didn’t go now they’d never go, he urged. His wife had reluctantly agreed, knowing that he was right, at least about the timing.

They’d met at a party in Riyadh ten years ago. He was an architect in a big construction company. Shauna had worked in the personnel department. They were both in their early twenties, making lots of money and having a ball. They’d clicked and started dating. Greg sighed, remembering those carefree days. They’d had a great, relatively stress-free couple of years and then come home to get married.

The money they’d made in Saudi had bought them a four-bedroom house in Malahide; they hadn’t even needed a mortgage. They’d bought it in Shauna’s name so they wouldn’t have to pay stamp duty as they were still paying off the mortgage on the place that Greg had bought when he was single. The apartment was now let, and the rent more than covered the mortgage repayments.

Greg wanted to increase his property portfolio and get into the property business in a big way. He’d bought and renovated two small redbrick houses in Cabra and made a relatively good profit on them. It had given him the taste for property speculation. Another stint in the Gulf would boost the bank balance enough to get him on the next rung of the property ladder.

It had all been going swimmingly until Shauna had got broody. He’d managed to put her off for a few years but she’d said that she didn’t want to be too old having her first child and that thirty was considered quite old for a first-time mother. Reluctantly, he’d agreed to try for a baby. Chloe had been conceived a couple of months after they’d stopped using contraception and Shauna had been over the moon.

Greg scowled under the duvet. It seemed she was getting broody again. As he’d told her, her timing was lousy. Well, she could forget it. When they moved back to the Gulf they’d have an au pair to help out with Chloe and they were going to start having fun and socializing again. Life in Abu Dhabi would be far less restricted than their life had been in Saudi. It was just what they needed. Once they were out there, she’d forget all this baby stuff. His eyelids drooped and within minutes he was asleep.

Shauna could hear her husband’s snores rumbling across the landing. Selfish lump, she thought sourly. Greg rarely got up to attend to Chloe. You wanted her, you deal with her was the unspoken reproach that had permeated their marriage since she’d had the baby.

What was wrong with him? Why couldn’t he enjoy their child? Why couldn’t he see that it would be good for them to have another baby, sooner rather than later, so that the children would be companions for each other? It made sense. They’d be around the same stage getting through all the childhood and teenage stuff. They’d be close to each other, there for each other in times of trouble, just like her siblings were there for her.

She looked down at Chloe’s blond head nestled into her shoulder and her heart contracted with love. Her daughter’s curls were the colour of spun gold and framed her head like an angelic halo. Her two little cheeks were fire-engine red and her chin was damp from dribbles. Shauna wiped her mouth tenderly with a soft bib. Chloe whimpered.

‘It’s all right, darling. Let’s give you a drop of Calpol and you’ll be as right as rain,’ she murmured, stifling a yawn. It looked as if it could be a bumpy night. If she was up with one child she might as well be up with two, she thought resentfully. If she didn’t get pregnant soon Chloe would be too old for her sibling. She’d love to have another little girl. It would be wonderful for her daughter to have a sister. Shauna smiled, thinking of her own sister, Carrie. She was really going to miss her when she went back out to the Gulf. Not only was Carrie her sister, she was her best friend. She’d understand Shauna’s desire for another baby better than anyone would.