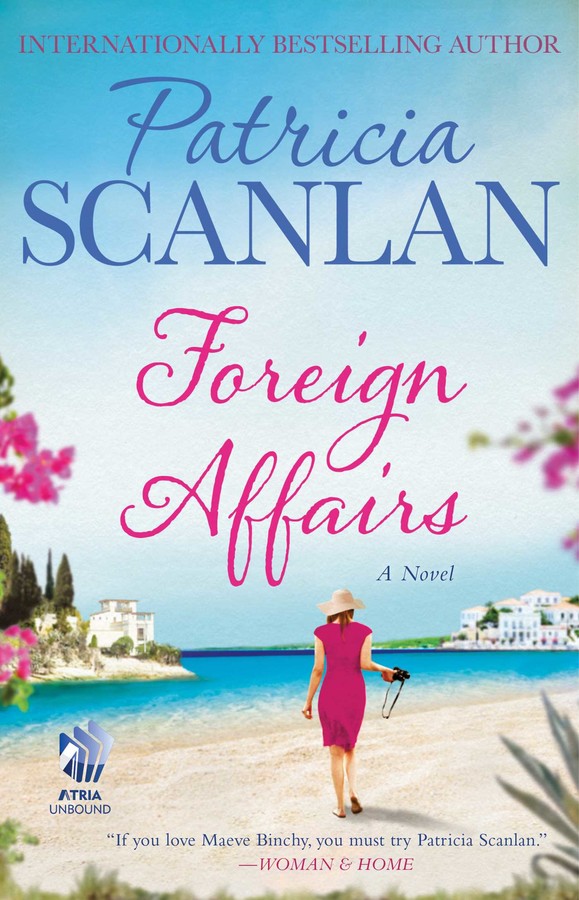 When four friends take a trip to Greece, they’ll learn how strong their friendship truly is in this heartwarming novel from internationally bestselling author Patricia Scanlan.

When four women stay in a luxurious villa on a Greek island, they soon realize that they have embarked on more than just a foreign holiday. Amid arguments, laughter, and fun, they come to see each other in a different light.

Paula is beautiful, ambitious and successful. She works hard and plays hard. Men find their irresistible…except for the one man she really wants.

In her late thirties, Brenda is tired of being a housewife stuck at home with her children. But then the unthinkable happens.

Shy and timid, Rachel has always been dominated by her cold, intolerant father. Does she have the courage to finally become her own woman?

Jennifer is a true friend to them all. But when tragedy strikes, will Paula, Brenda, and Rachel be there for Jennifer when she needs them?

Foreign Affairs Chapter One
‘I’m afraid, Mr Stapleton, your wife has had a very difficult labour and it was touch and go for a while at the birth. However she has been safely delivered of a baby girl and both will survive. There can be no more children.’ Doctor Ward was quietly emphatic.

William Stapleton drew a deep breath, the nostrils of his aquiline nose turning white. ‘I see,’ he said stiffly.

‘Her heart won’t take it and I’ve told her of the danger. You understand?’ Doctor Ward’s piercing blue eyes, not dimmed by age, stared into the eyes of the younger man. It was a hard thing to do, to tell a young man of thirty-three that his sex life was to be curtailed and two children was his limit. Normally he would have felt pity for any unfortunate in that position. But Doctor Ward just couldn’t take to William Stapleton. He had a way of looking at you as if he thought he was far above you and he treated his young wife like one of his pupils from the village school. The doctor gave William a stern look. There was no doubt in his mind that another child would kill Theresa, it was up to William to see that that never happened.

‘I don’t want to see Theresa in my surgery telling me she thinks she’s pregnant. I’ve told this to Theresa and I’m telling you now. Another child would kill her. And I won’t have that on my conscience. Now I’ve done my duty you must do yours,’ the doctor said gruffly. What that lovely young girl had married that dry old stick for, he could not imagine.

Theresa Stapleton was a quiet, gentle, shy young woman, ten years younger than her husband. Thoroughly dominated by him, and unable to assert herself, she was smothered by her husband’s authoritarianism and felt herself inferior to him in every way. Her husband encouraged this belief. Doctor Ward, who was a shrewd judge of character, was quite aware of this. ‘You understand, Mr Stapleton?’ he repeated sternly.

‘Yes, Doctor, I do,’ William said coldly. ‘Thank you for all your help.’

‘I’ll be back tomorrow and every day for the rest of the week. Your wife is in a very weakened condition, she must have complete bed rest for at least a fortnight. You have someone to look after the little lad?’

‘My mother,’ William replied. God help us all, thought Doctor Ward as he slipped into his tweed overcoat. Bertha Stapleton was as bad, if not worse than, her son. God help that poor unfortunate up in the bed, with the pair of them.

‘Goodnight, Doctor.’ William closed the door, not even waiting for Doctor Ward to get into his ancient Morris Minor. Stupid old codger, he thought sourly. What would he know, he was only an old country quack. Millions of women had children like peas popping from a pod, why did he have to marry a woman who made a production out of it?

Slowly he walked up the stairs of the fine two-storey house he had installed his wife in when he married her three years ago. She had done well for herself, had Theresa Nolan. Married the schoolmaster. Lived in a house half the women in the village would give their eye-teeth for. Lacked for nothing. Had a fine healthy one-year-old son, and now a daughter. And what did he have? William thought irritably. Just responsibilities and burdens and now not even the comfort of the marriage bed to look forward to. He might as well be bloody single, he reflected as he opened the door to their bedroom. Still, he was not a man to shirk his duty. And his duty was to provide for his wife. She would not find reproach in his eyes when he looked at her.

Theresa lay in the wide brass bed, her face the colour of faded yellow parchment. Two big bruised brown eyes turned in his direction as he entered the room. Curls of chestnut hair lay damply against her forehead and he could see the sheen of perspiration on her upper lip. In her arms she held a small swaddled bundle.

‘I’ll just go and make you a cup of tea, pet, while you show your husband the little dote.’ Nancy McDonnell, the village midwife, smiled as she gathered together her bits and pieces.

‘Thanks, Mrs McDonnell,’ Theresa murmured weakly, staring at her husband.

‘Rest yourself now, Theresa, like a good girl. Don’t talk too much. Your husband won’t mind, he’ll be too busy looking at his little beauty.’ Nancy beamed as she fluffed up the pillows before leaving them alone.

‘How are you feeling?’ William said gruffly.

‘Tired, sore.’ She hesitated. ‘Did you talk to the doctor?’

‘I’ll move into the spare room,’ William said coldly. ‘I’ll not be accused of being irresponsible by Doctor Ward or any other.’

‘I’m sorry, William,’ Theresa said quietly. Although if she was completely honest, she felt a great relief at his words. Theresa was a dutiful wife but she did not love her husband. She had only married him to obey her parents’ wishes. Marrying the schoolmaster was considered almost as good as marrying a doctor or the like. Theresa’s mother had been terrified that her daughter would end up on the shelf and she had encouraged the match strongly. Marriage was not for pleasure, her mother had told her often enough. Marriage was a duty and Theresa had been brought up to be a good attentive wife. Able to run a house and when the time came, have and take care of the children God would bless her with. She was lucky, her mother informed her over and over again, that a man of William Stapleton’s calibre was taking an interest in her. The day of her wedding had been one of the happiest days of her mother’s life. Theresa had felt utterly and completely trapped.

Only today, when Doctor Ward had told her no more children and William had informed her that he was moving into the spare room, had she felt the slightest glimmer of hope. A little fluttering of freedom. She would make this bedroom a haven, a peaceful place, Theresa decided. Here she would read and sew and look out at the hustle and bustle of village life. It would be her refuge from her husband. Happiness flickered briefly.

‘What will we call her?’ Theresa asked her stern-looking husband as she tucked the shawl closer around her baby.

‘Call her what you like,’ William answered with hardly a glance at his new-born child.

Theresa’s hold tightened on the sleeping baby in her arms. So that was going to be the way of it, she thought. God help the poor child, William would hold this against her. Well she would do her best to make her feel happy and loved, after all, her arrival had given Theresa a freedom of sorts and for that she would always be in her daughter’s debt. Almost to herself she murmured, ‘Rachel, that’s what I want to call her. I’m going to call her Rachel.’