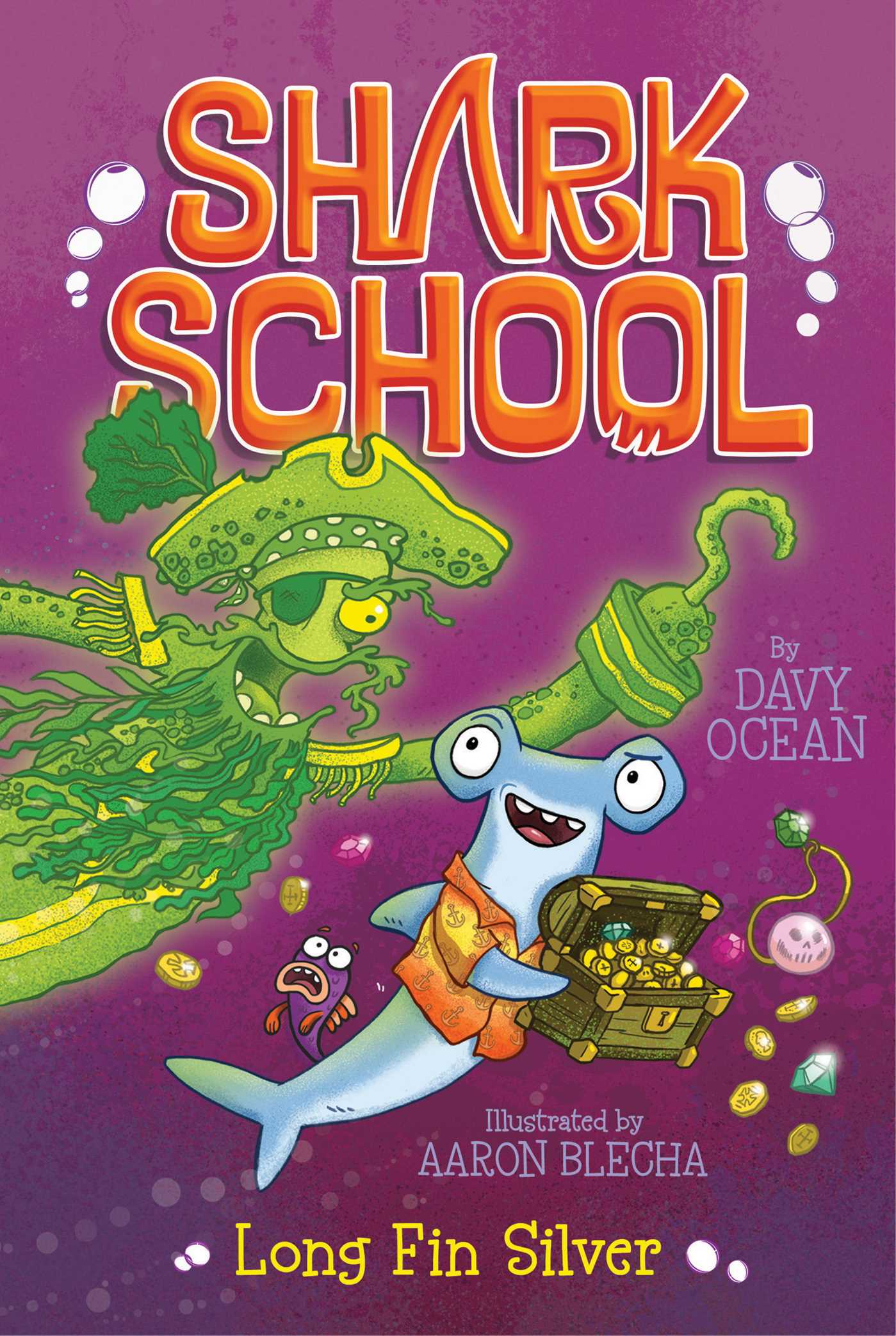 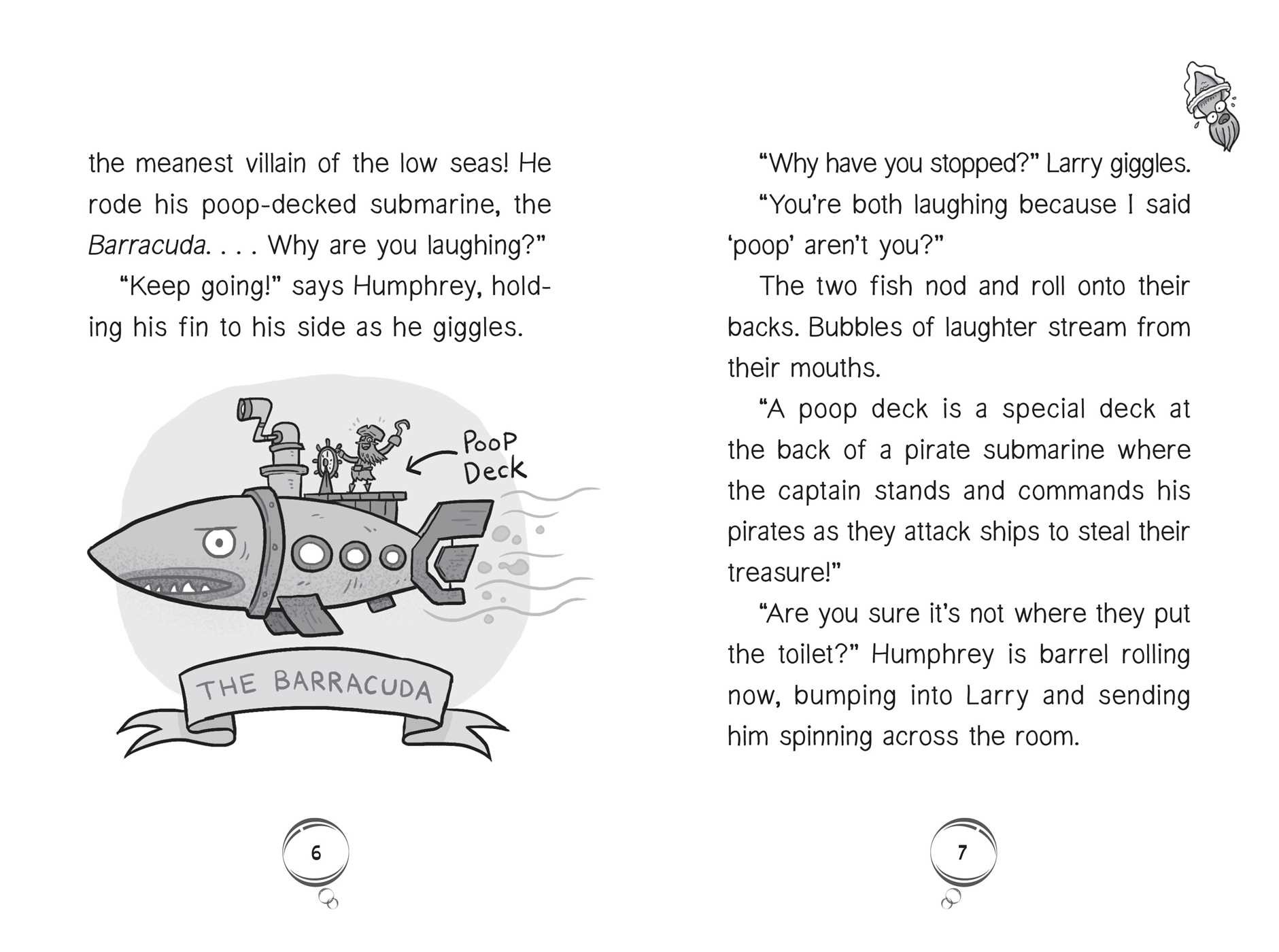 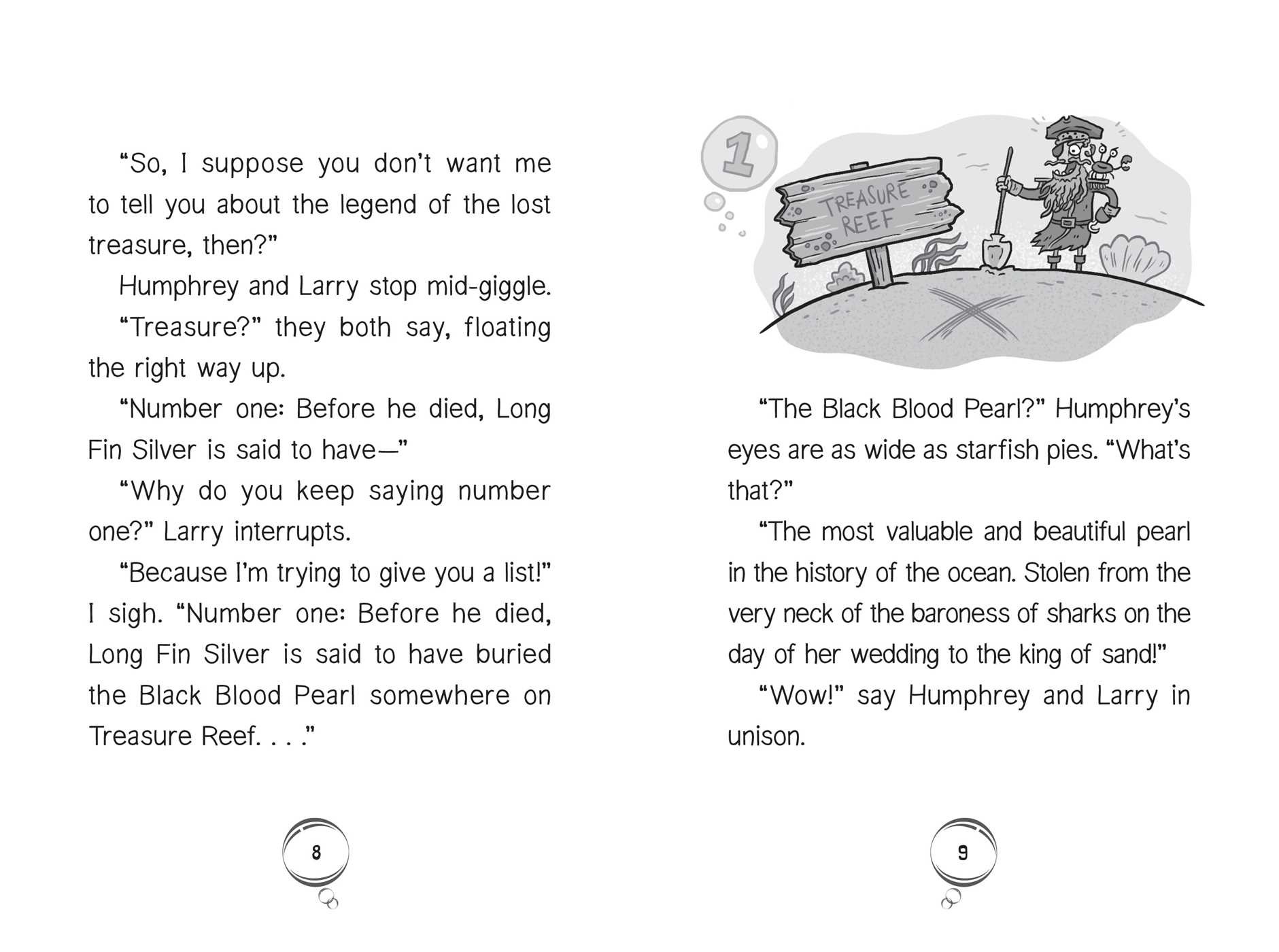 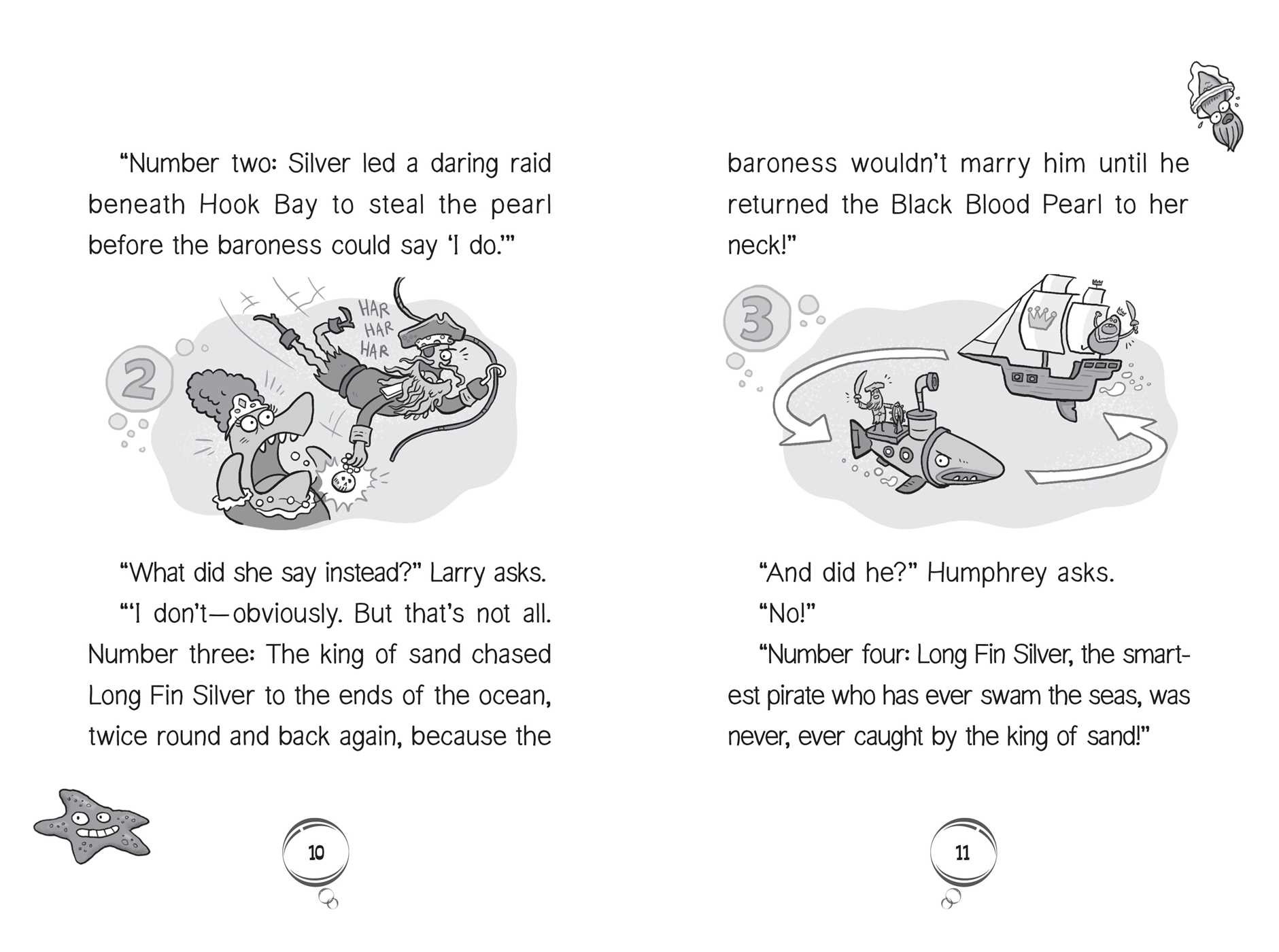 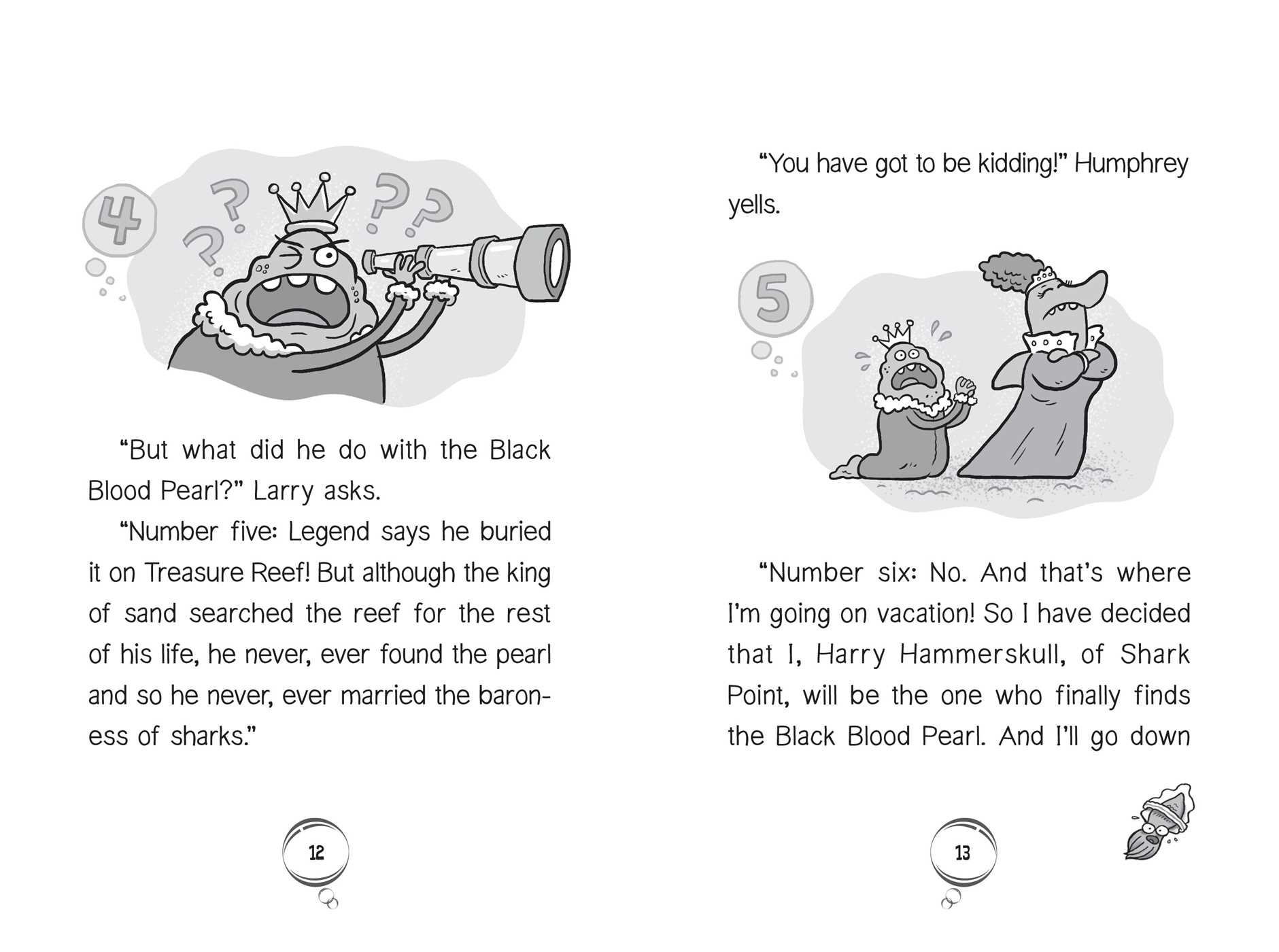 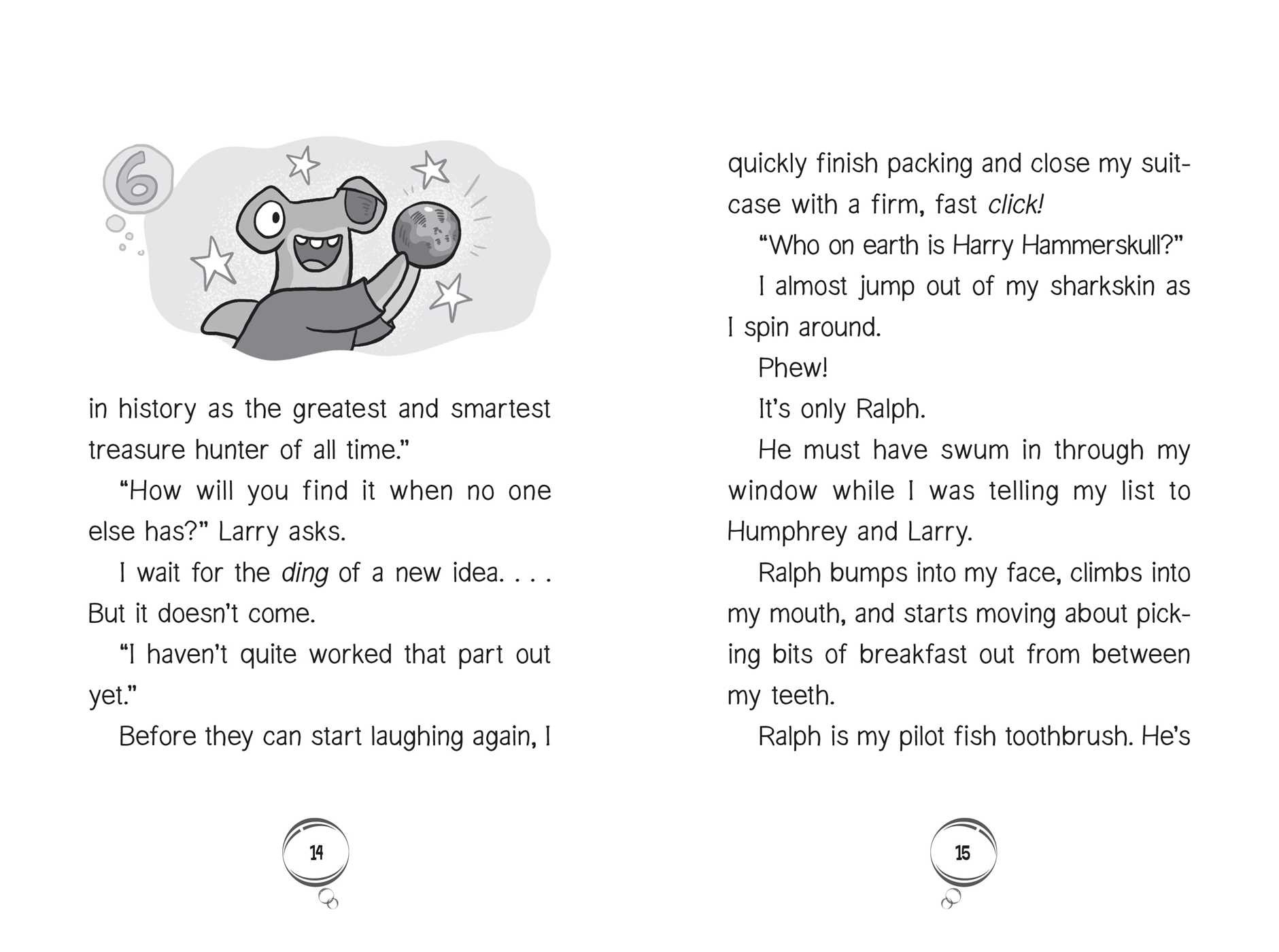 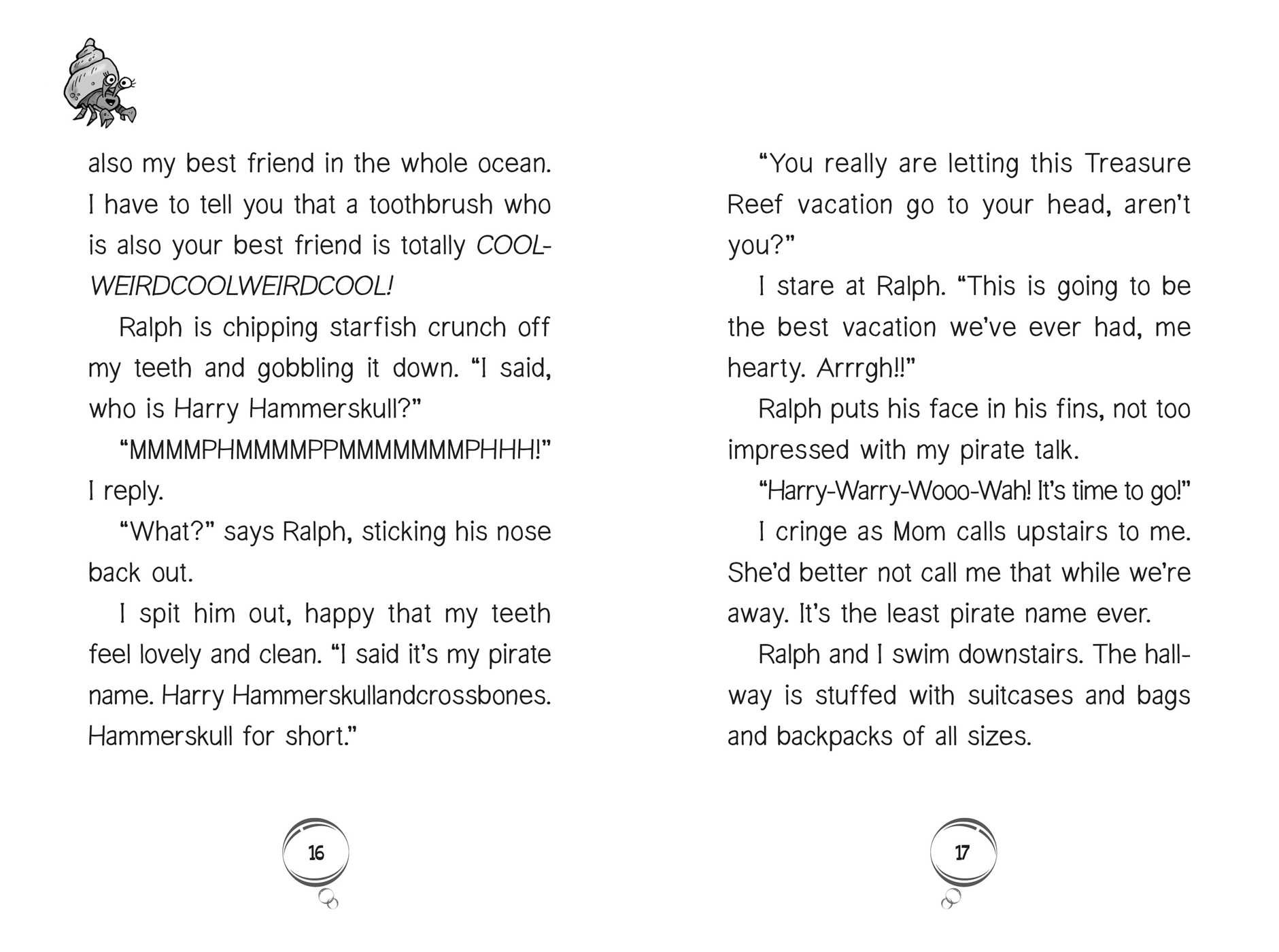 Harry Hammer looks for the lost treasure of Long Fin Silver, the greatest pirate of the deep seas, in this ninth Shark School (mis)adventure.

Harry Hammer can’t believe his luck! He and his family are going on vacation to Treasure Reef, home of The Lost Treasure of that dastardly, long-ago pirate Long Fin Silver. Legend has it that Long Fin buried the Black Blood Pearl, the most valuable and beautiful gem in the history of the ocean. Harry and his pesky cousin Harvey are on the hunt for treasure, but they best beware of where they look, as they’re about to come fin-to-fin with the spooky spirit of Long Fin Silver himself!

“A vast what?” Humphrey my humming-fish alarm clock says, peering at Larry my lantern fish’s rear dorsal. “I wouldn’t say it was vast. Large, maybe. You should cut down on the Kelp Krispies, Larry.”

“Hey!” says Larry, angrily flashing his light. “You’re not so slim yourself!”

“Shiver me timbers!” I whoop as I tail-swipe a suitcase from under my bed. I bump it open with the right side of my hammerhead and dart over to my drawers. “Don’t you two know what day it is?”

“No!” I swim up to them and put one fin over my eye like a patch and wave my tail in their faces like a sword. “It’s the day I’m off to Treasure Reef for our family vacation!”

I start pulling clothes from my drawers. “Treasure Reef is the best vacation destination in the whole sea world! It’s like the pirate paradise of the ocean and we’re going there for two weeks! I wish you two could join us, but Dad and Mom said just Ralph could come this time.”

That’s me having an idea.

I now know exactly how to make the trip to Treasure Reef seem more interesting to them-I’ll make a list!

“Number one: LONG FIN SILVER!” I blurt at Humphrey and Larry.

“Number one: Long Fin Silver was the greatest pirate of the seas!”

“Oh, I thought you meant one of those funny-faced parrot fish,” says Larry.

“NO! Number one: Long Fin Silver was the meanest villain of the low seas! He rode his poop-decked submarine, the Barracuda . . . . Why are you laughing?”

“Keep going!” says Humphrey, holding his fin to his side as he giggles.

“Why have you stopped?” Larry giggles.

“You’re both laughing because I said ‘poop’ aren’t you?”

The two fish nod and roll onto their backs. Bubbles of laughter stream from their mouths.

“A poop deck is a special deck at the back of a pirate submarine where the captain stands and commands his pirates as they attack ships to steal their treasure!”

“Are you sure it’s not where they put the toilet?” Humphrey is barrel rolling now, bumping into Larry and sending him spinning across the room.

“So, I suppose you don’t want me to tell you about the legend of the lost treasure, then?”

“Treasure?” they both say, floating the right way up.

“Number one: Before he died, Long Fin Silver is said to have-”

“Why do you keep saying number one?” Larry interrupts.

“Because I’m trying to give you a list!” I sigh. “Number one: Before he died, Long Fin Silver is said to have buried the Black Blood Pearl somewhere on Treasure Reef . . . .”

“The Black Blood Pearl?” Humphrey’s eyes are as wide as starfish pies. “What’s that?”

“The most valuable and beautiful pearl in the history of the ocean. Stolen from the very neck of the baroness of sharks on the day of her wedding to the king of sand!”

“Number two: Silver led a daring raid beneath Hook Bay to steal the pearl before the baroness could say ‘I do.’?”

“What did she say instead?” Larry asks.

“?‘I don’t-obviously. But that’s not all. Number three: The king of sand chased Long Fin Silver to the ends of the ocean, twice round and back again, because the baroness wouldn’t marry him until he returned the Black Blood Pearl to her neck!”

“And did he?” Humphrey asks.

“Number four: Long Fin Silver, the smartest pirate who has ever swam the seas, was never, ever caught by the king of sand!”

“But what did he do with the Black Blood Pearl?” Larry asks.

“Number five: Legend says he buried it on Treasure Reef! But although the king of sand searched the reef for the rest of his life, he never, ever found the pearl and so he never, ever married the baroness of sharks.”

“You have got to be kidding!” Humphrey yells.

“Number six: No. And that’s where I’m going on vacation! So I have decided that I, Harry Hammerskull, of Shark Point, will be the one who finally finds the Black Blood Pearl. And I’ll go down in history as the greatest and smartest treasure hunter of all time.”

“How will you find it when no one else has?” Larry asks.

“I haven’t quite worked that part out yet.”

Before they can start laughing again, I quickly finish packing and close my suitcase with a firm, fast click!

“Who on earth is Harry Hammerskull?”

I almost jump out of my sharkskin as I spin around.

He must have swum in through my window while I was telling my list to Humphrey and Larry.

Ralph bumps into my face, climbs into my mouth, and starts moving about picking bits of breakfast out from between my teeth.

Ralph is chipping starfish crunch off my teeth and gobbling it down. “I said, who is Harry Hammerskull?”

“What?” says Ralph, sticking his nose back out.

I spit him out, happy that my teeth feel lovely and clean. “I said it’s my pirate name. Harry Hammerskullandcrossbones. Hammerskull for short.”

“You really are letting this Treasure Reef vacation go to your head, aren’t you?”

I stare at Ralph. “This is going to be the best vacation we’ve ever had, me hearty. Arrrgh!!”

Ralph puts his face in his fins, not too impressed with my pirate talk.

I cringe as Mom calls upstairs to me. She’d better not call me that while we’re away. It’s the least pirate name ever.

Ralph and I swim downstairs. The hallway is stuffed with suitcases and bags and backpacks of all sizes.

Mom is floating by the door, checking her watch and making sure her summer hat is on straight.

I hold up my suitcase and drift past her, where I see a taxicrab waiting to take us to Shark Point Harbor.

“Did you remember to pack those books for Cousin Harvey?” Mom asks.

I nod and hold up a net-bag full of books.

Harvey and my aunt Hettie and uncle Hector are also coming on vacation. I haven’t seen Harvey since he was a baby. I remember him looking at me all googly-eyed and hugging me and gurgling my name. He thinks I’m the greatest. It’ll be loads of fun seeing him again and getting him to join me and Ralph.

I quickly make a list of my fellow pirates in my head and give them pirate names:

2. Harpoon-Humphrey * (Making sure all is safe on the home front)

And my new sidekick

I know Harvey is going to be the coolest little cousin EVER!