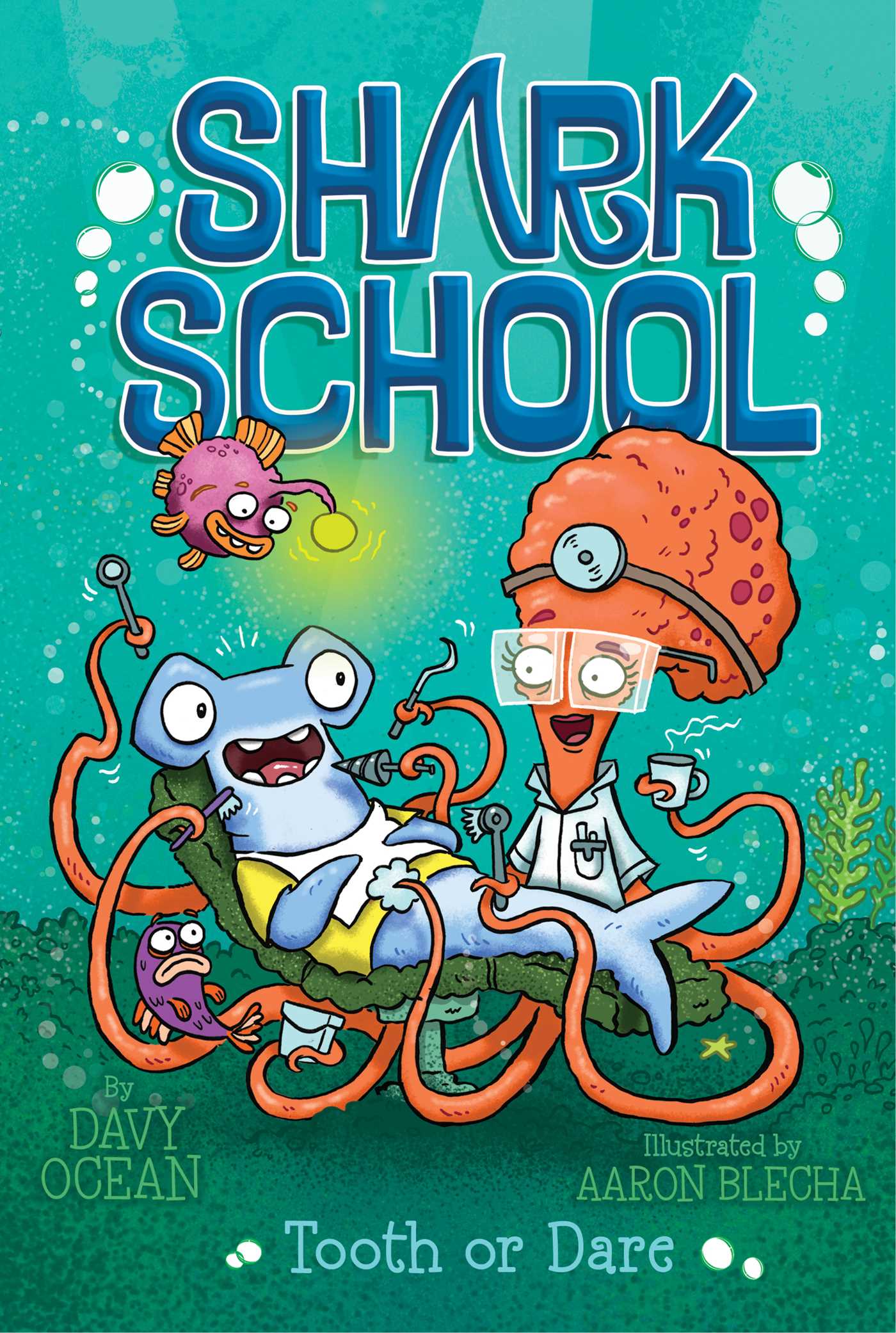 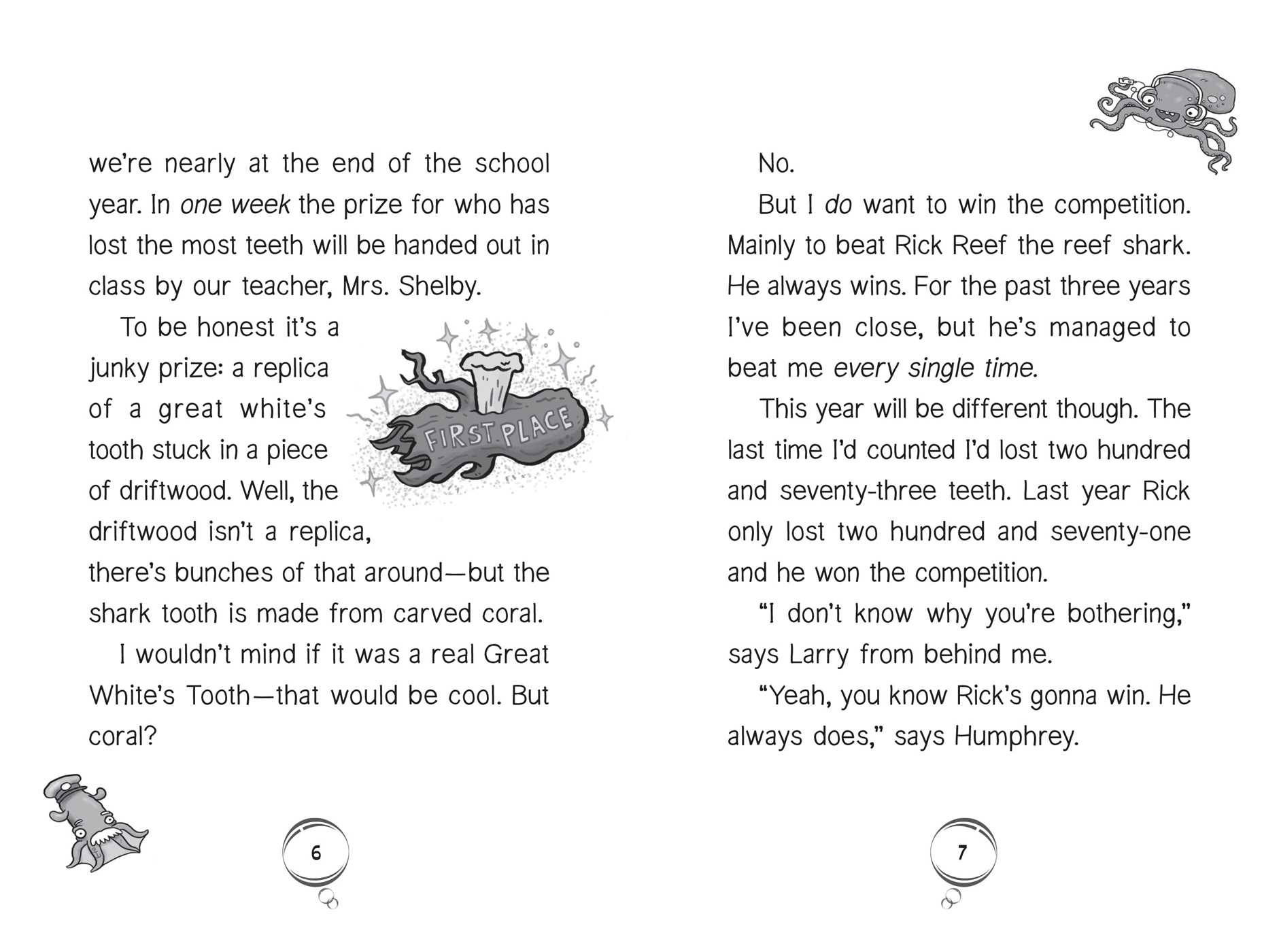 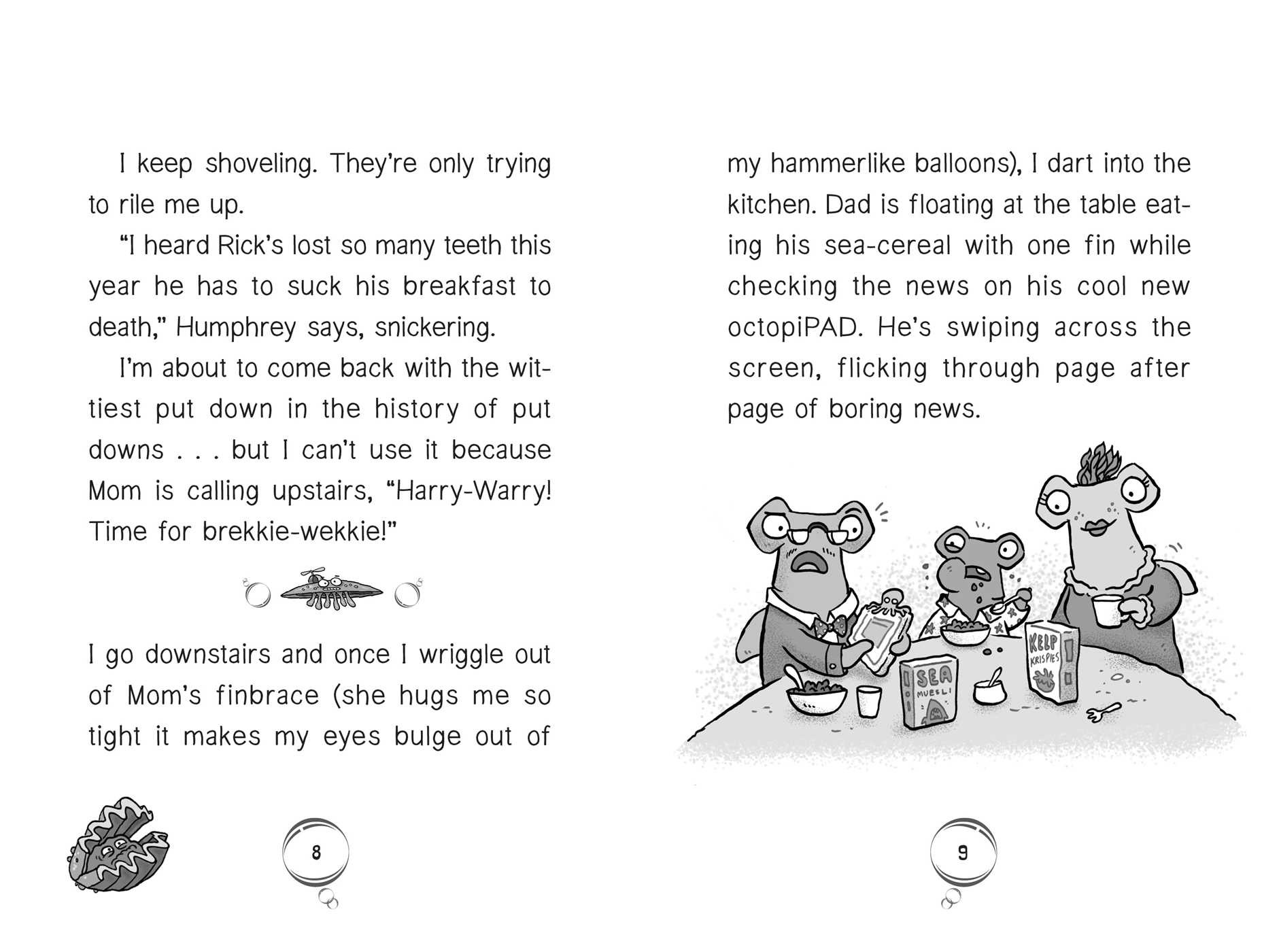 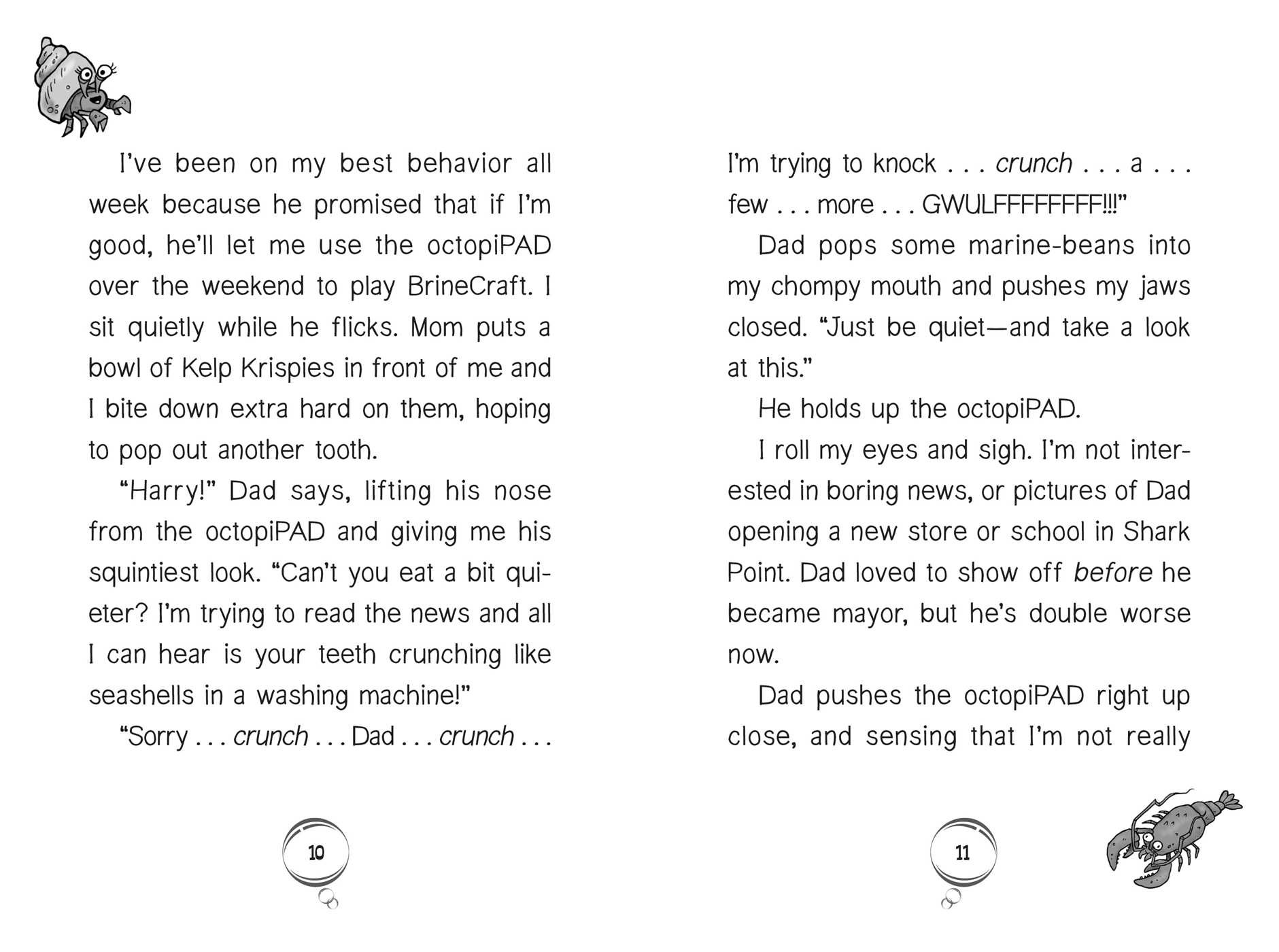 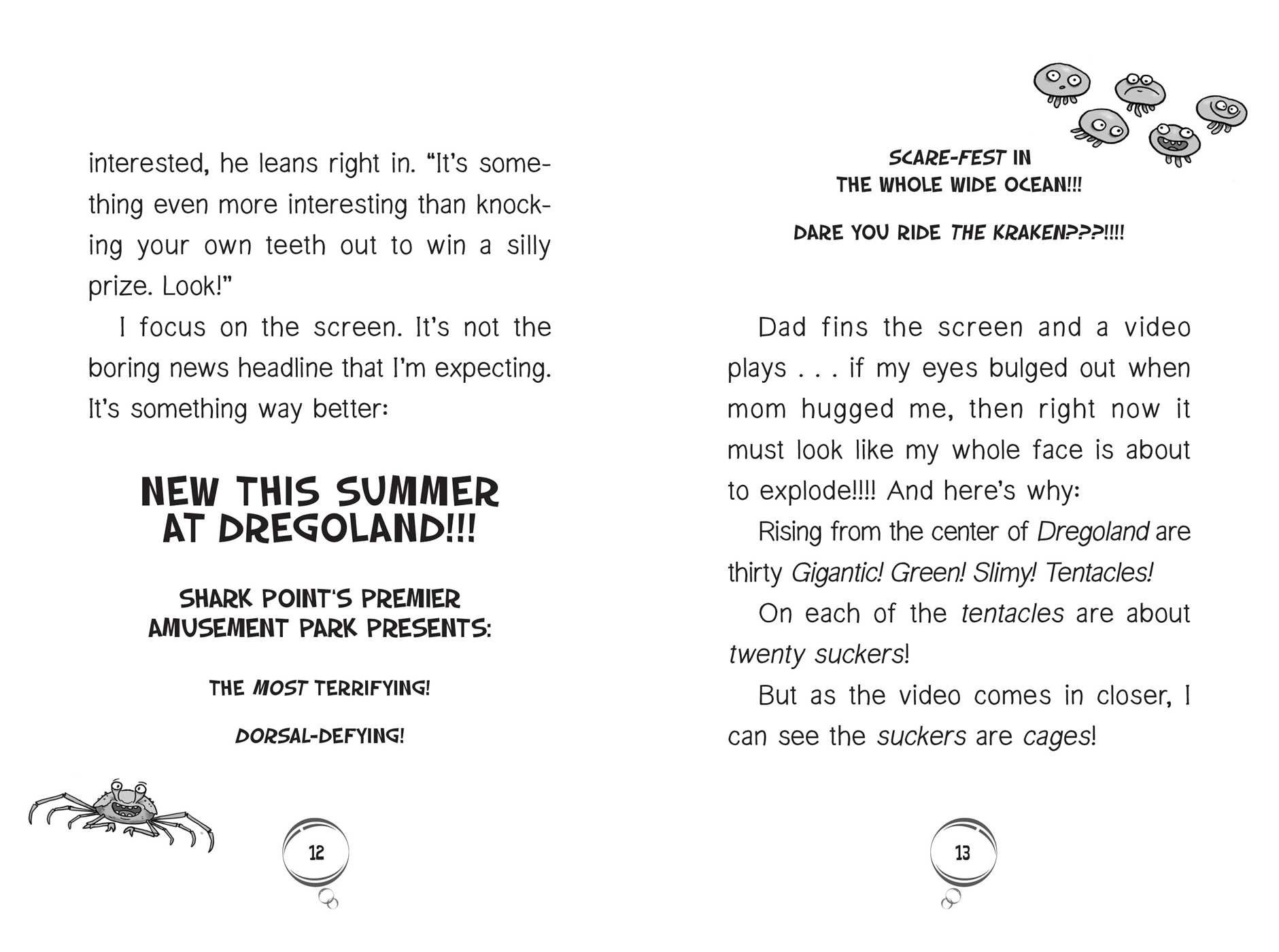 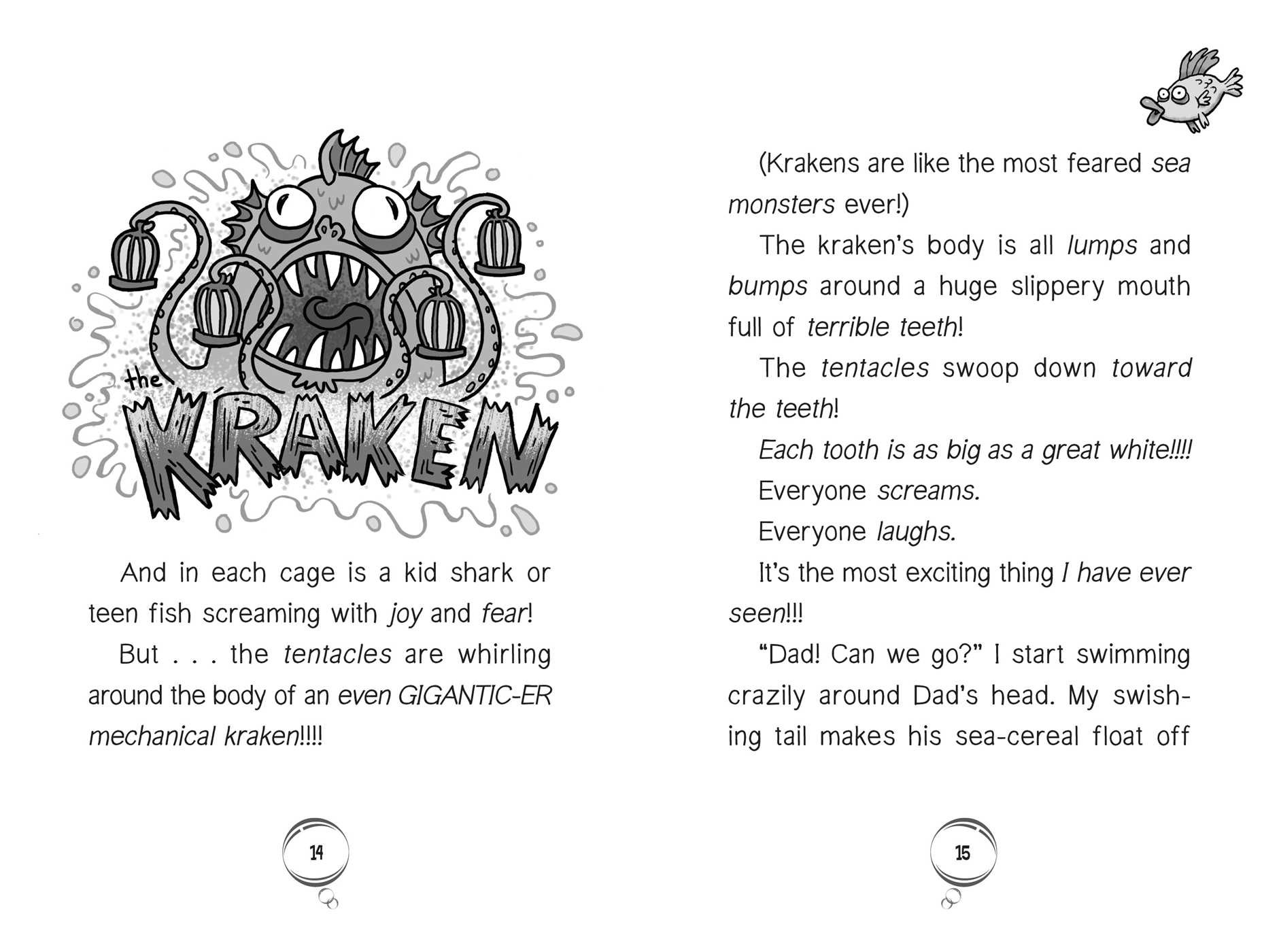 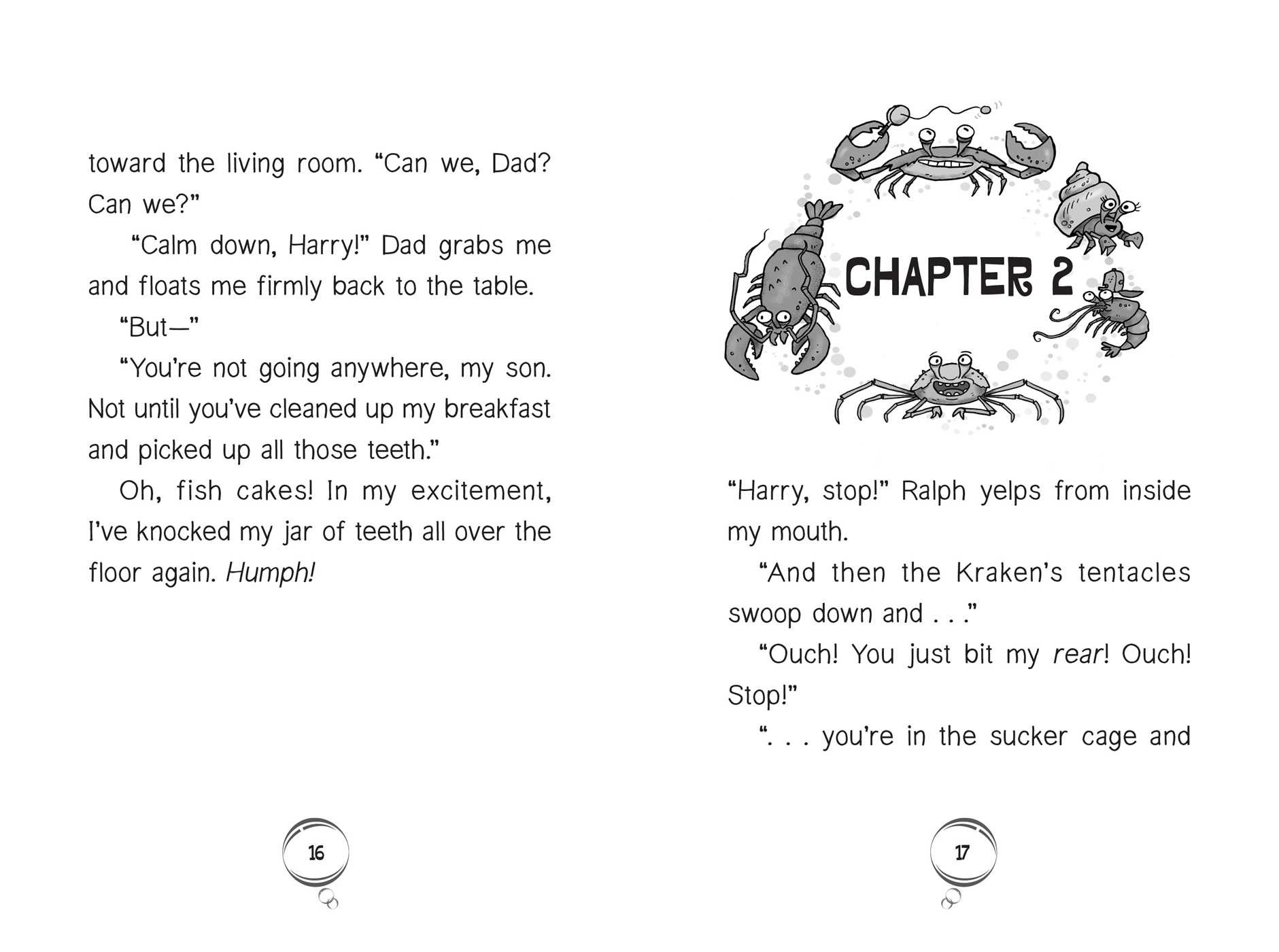 Everyone in Harry Hammer’s class at school is talking about a fin-tastic new ride that’s premiering at Dregoland, Shark Point’s amazing amusement park. It’s the most terrifying, dorsal-defying, scare-fest in the whole wide ocean! And guess what? Whoever loses the most shark teeth in Harry’s class will get to go on the ride before anyone else—and meet Gregor the Gnasher, superstar wrestler.

Harry and his arch-nemesis Rick Reef are tied for first place, but will Harry pull it off and win the contest?

As the huge pyramid of teeth I’ve been counting crashes to the bedroom floor, I glare at Humphrey, my humming-fish alarm clock, from both sides of my hammer.

The glare is meant to make him terrified . . . but in this case it’s more laughing-i-fied.

Humphrey floats onto his back as bubbles of laughter explode from his gills.

With a sudden flash, Larry the Lantern Fish starts glowing like a ship’s fog light. Larry always gets too bright when he’s startled.

“Is it time to get up already?” he says sleepily, finning his eyes and dimming his light.

I float around and sigh at the teeth scattered all over the carpet.

How many teeth do you have? Count them. While you’re doing that, I’ll list all you need to know about my teeth.

Sharks have about a squillion unbelievably sharp teeth.

I have row after row of them in my mouth.

They fall out all the time and are replaced within a day.

If there was a Tooth Fairy for sharks (like you leggy air breathers have) we’d all be millionaires by the time we’re eight.

But we don’t have a Tooth Fairy, and they’d probably run out of money in half a day.

Instead we collect our teeth in a jar and have a competition at school to see who has lost the most each year.

That’s why I was counting them out on top of my bedside crabinet.

But now they’re scattered all over the floor and I have to count them all out again! (Humphrey starting to hum made me jump and the teeth went flying.)

Humphrey obviously thinks this is the funniest thing he’s ever seen. I can still hear him snickering as I start shoveling the teeth back into the jar with my tail.

To be honest it’s a junky prize: a replica of a great white’s tooth stuck in a piece of driftwood. Well, the driftwood isn’t a replica, there’s bunches of that around-but the shark tooth is made from carved coral.

I wouldn’t mind if it was a real Great White’s Tooth-that would be cool. But coral?

But I do want to win the competition. Mainly to beat Rick Reef the reef shark. He always wins. For the past three years I’ve been close, but he’s managed to beat me every single time.

“I don’t know why you’re bothering,” says Larry from behind me.

I keep shoveling. They’re only trying to rile me up.

“I heard Rick’s lost so many teeth this year he has to suck his breakfast to death,” Humphrey says, snickering.

I’m about to come back with the wittiest put down in the history of put downs . . . but I can’t use it because Mom is calling upstairs, “Harry-Warry! Time for brekkie-wekkie!”

I go downstairs and once I wriggle out of Mom’s finbrace (she hugs me so tight it makes my eyes bulge out of my hammerlike balloons), I dart into the kitchen. Dad is floating at the table eating his sea-cereal with one fin while checking the news on his cool new octopiPAD. He’s swiping across the screen, flicking through page after page of boring news.

I’ve been on my best behavior all week because he promised that if I’m good, he’ll let me use the octopiPAD over the weekend to play BrineCraft. I sit quietly while he flicks. Mom puts a bowl of Kelp Krispies in front of me and I bite down extra hard on them, hoping to pop out another tooth.

“Harry!” Dad says, lifting his nose from the octopiPAD and giving me his squintiest look. “Can’t you eat a bit quieter? I’m trying to read the news and all I can hear is your teeth crunching like seashells in a washing machine!”

Dad pops some marine-beans into my chompy mouth and pushes my jaws closed. “Just be quiet-and take a look at this.”

He holds up the octopiPAD.

I roll my eyes and sigh. I’m not interested in boring news, or pictures of Dad opening a new store or school in Shark Point. Dad loved to show off before he became mayor, but he’s double worse now.

Dad pushes the octopiPAD right up close, and sensing that I’m not really interested, he leans right in. “It’s something even more interesting than knocking your own teeth out to win a silly prize. Look!”

I focus on the screen. It’s not the boring news headline that I’m expecting. It’s something way better:

NEW THIS SUMMER AT DREGOLAND!!!

SCARE-FEST IN THE WHOLE WIDE OCEAN!!!

Dad fins the screen and a video plays . . . if my eyes bulged out when mom hugged me, then right now it must look like my whole face is about to explode!!!! And here’s why:

Rising from the center of Dregoland are thirty Gigantic! Green! Slimy! Tentacles!

On each of the tentacles are about twenty suckers!

But as the video comes in closer, I can see the suckers are cages!

And in each cage is a kid shark or teen fish screaming with joy and fear!

But . . . the tentacles are whirling around the body of an even GIGANTIC-ER mechanical kraken!!!!

(Krakens are like the most feared sea monsters ever!)

The kraken’s body is all lumps and bumps around a huge slippery mouth full of terrible teeth!

The tentacles swoop down toward the teeth!

Each tooth is as big as a great white!!!!

It’s the most exciting thing I have ever seen!!!

“Dad! Can we go?” I start swimming crazily around Dad’s head. My swishing tail makes his sea-cereal float off toward the living room. “Can we, Dad? Can we?”

“Calm down, Harry!” Dad grabs me and floats me firmly back to the table.

“You’re not going anywhere, my son. Not until you’ve cleaned up my breakfast and picked up all those teeth.”

Oh, fish cakes! In my excitement, I’ve knocked my jar of teeth all over the floor again. Humph!
Davy Ocean