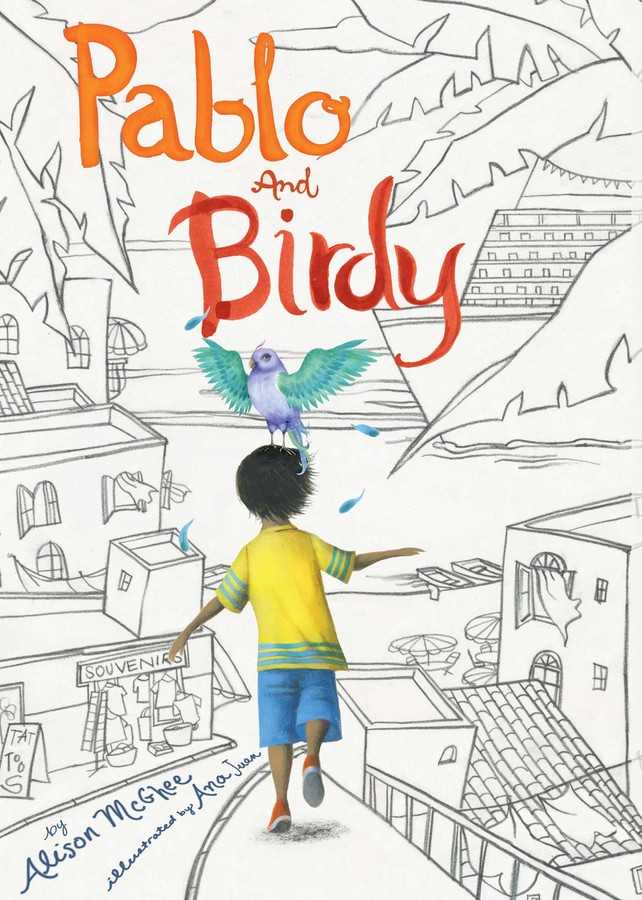 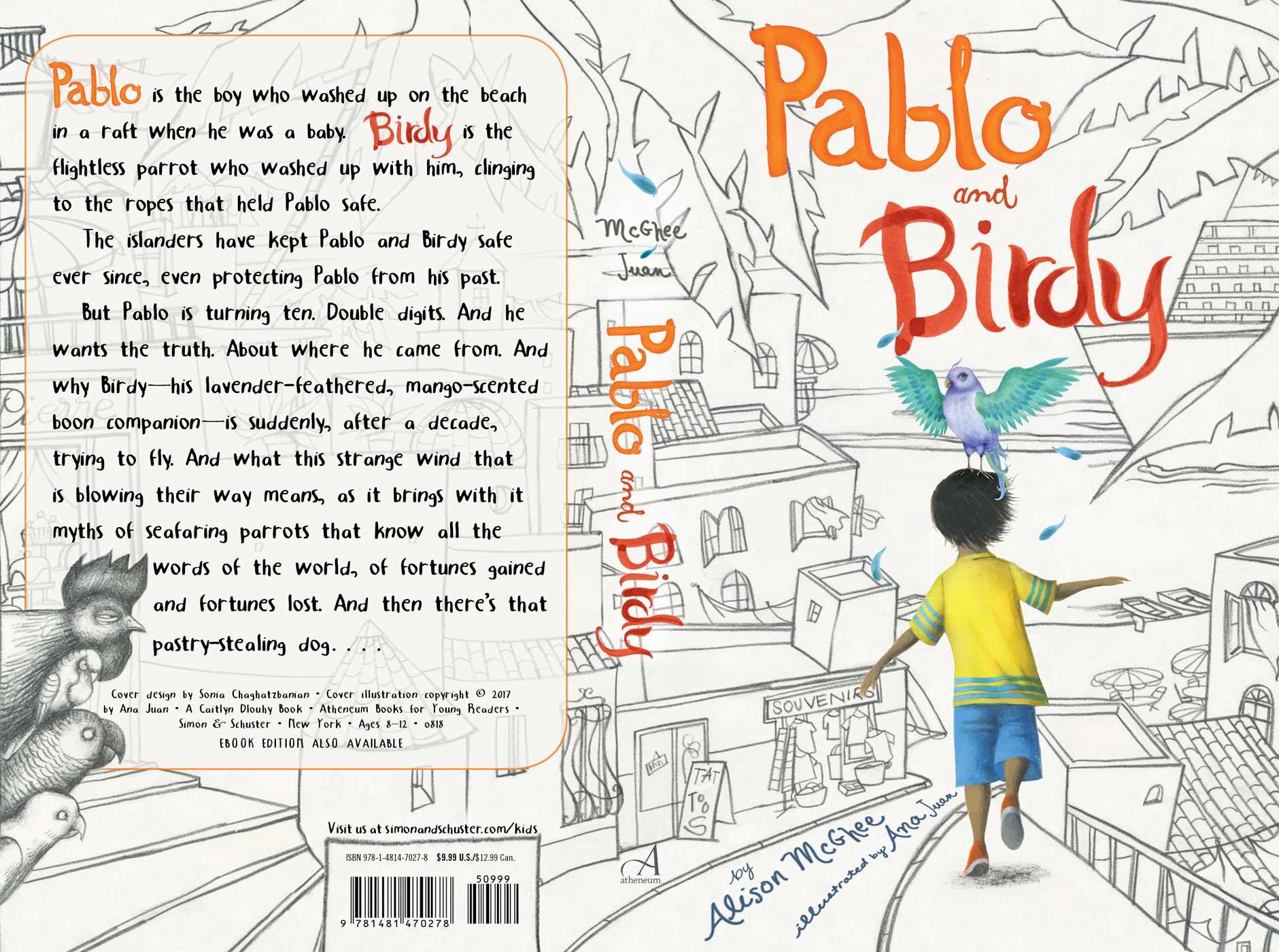 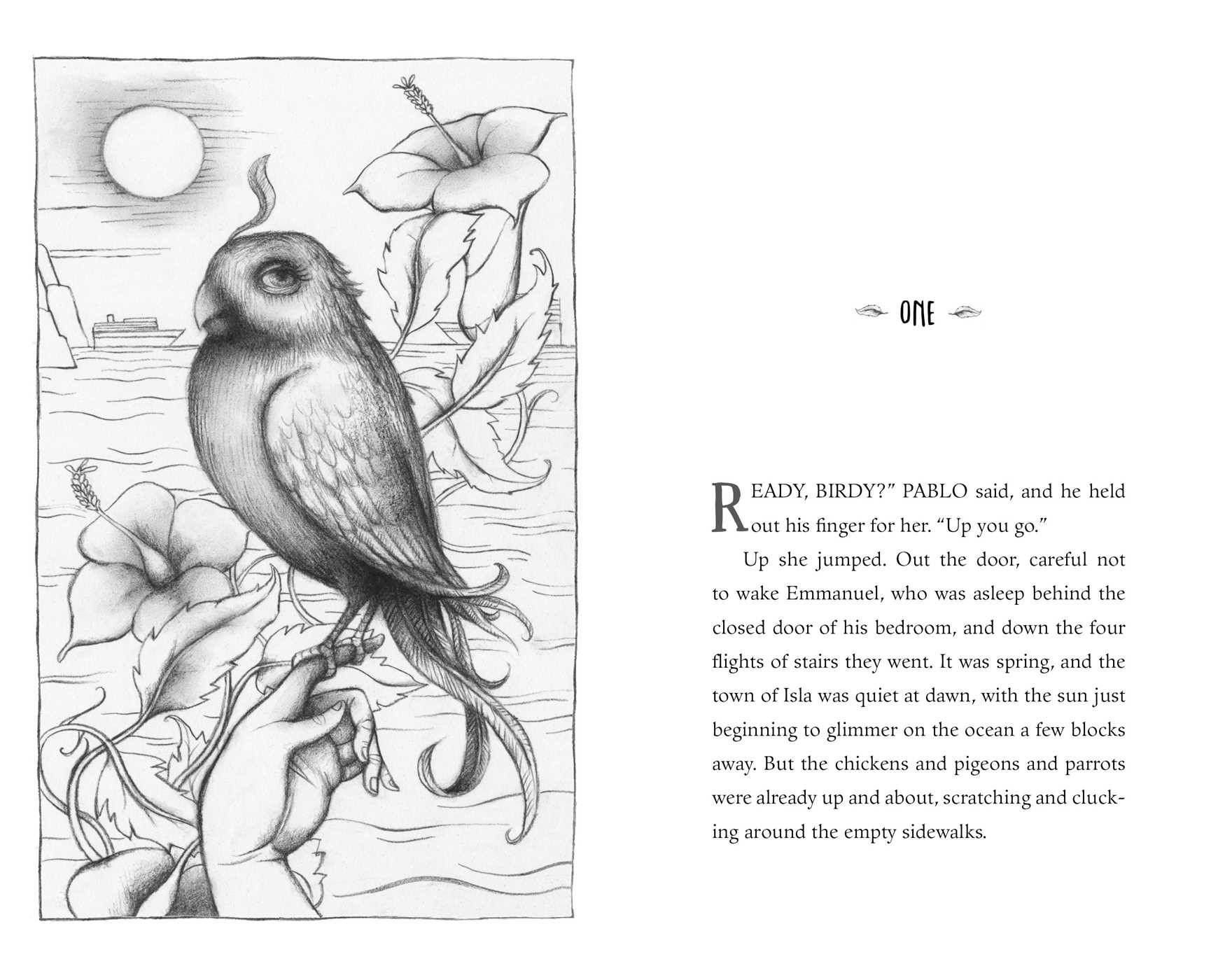 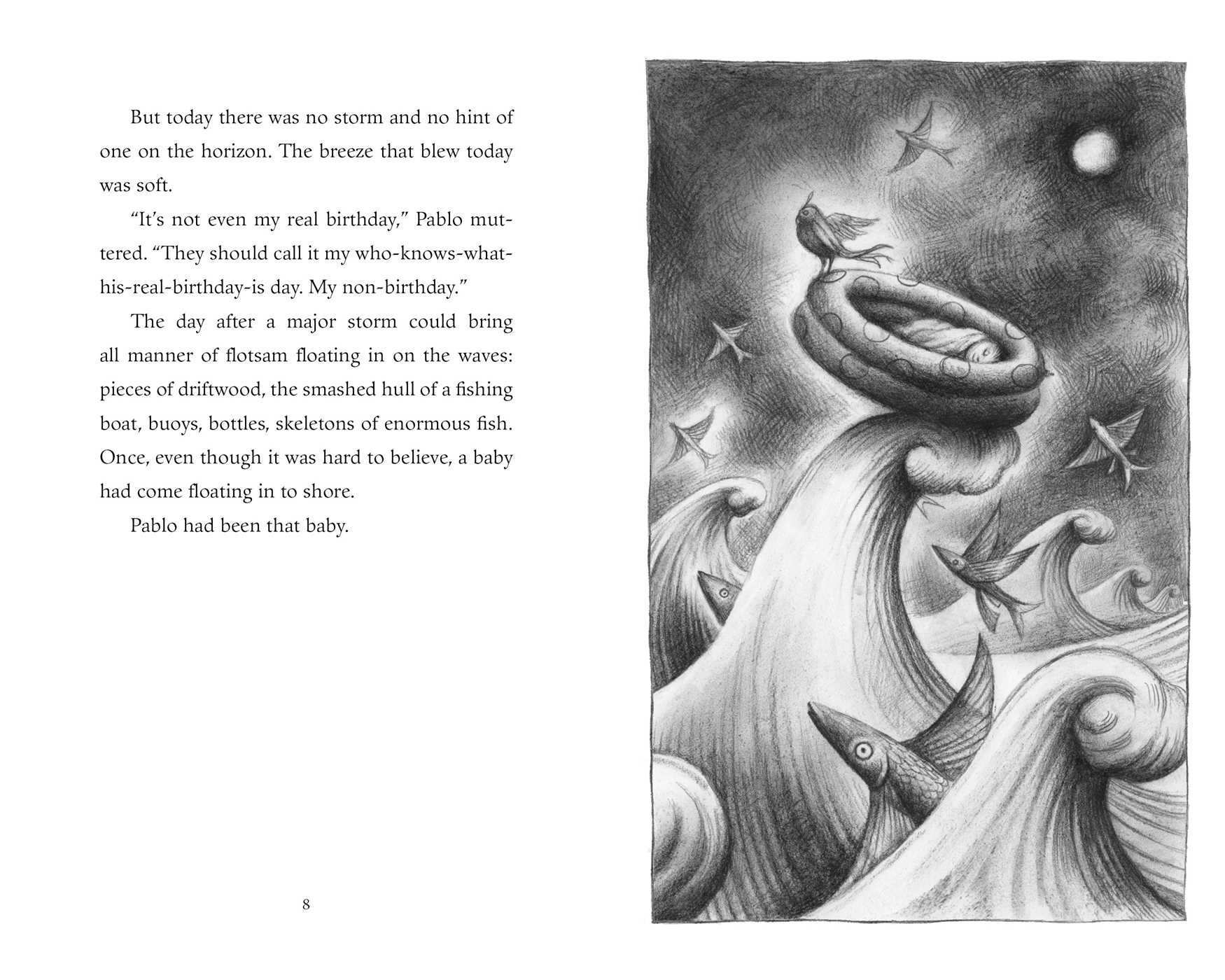 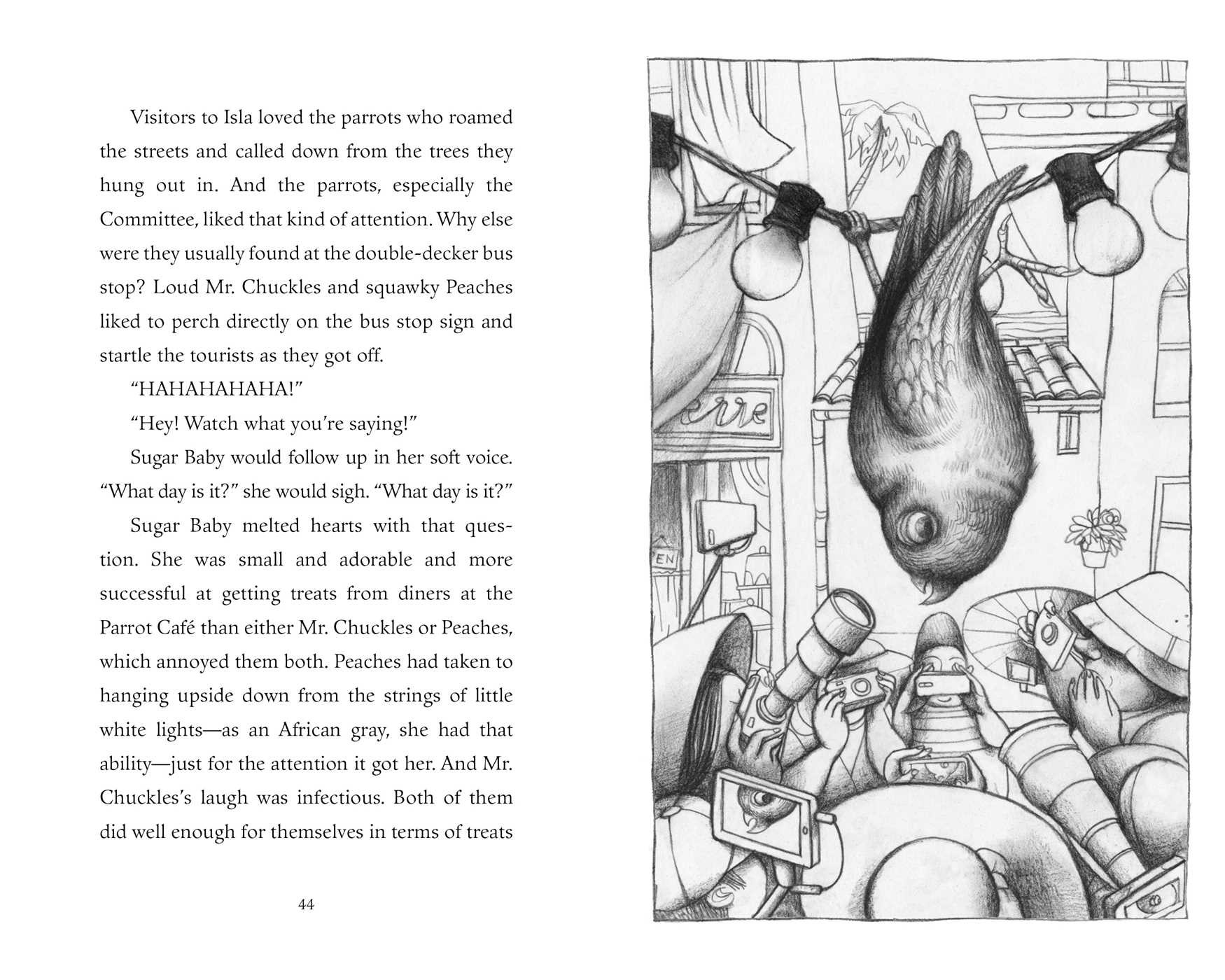 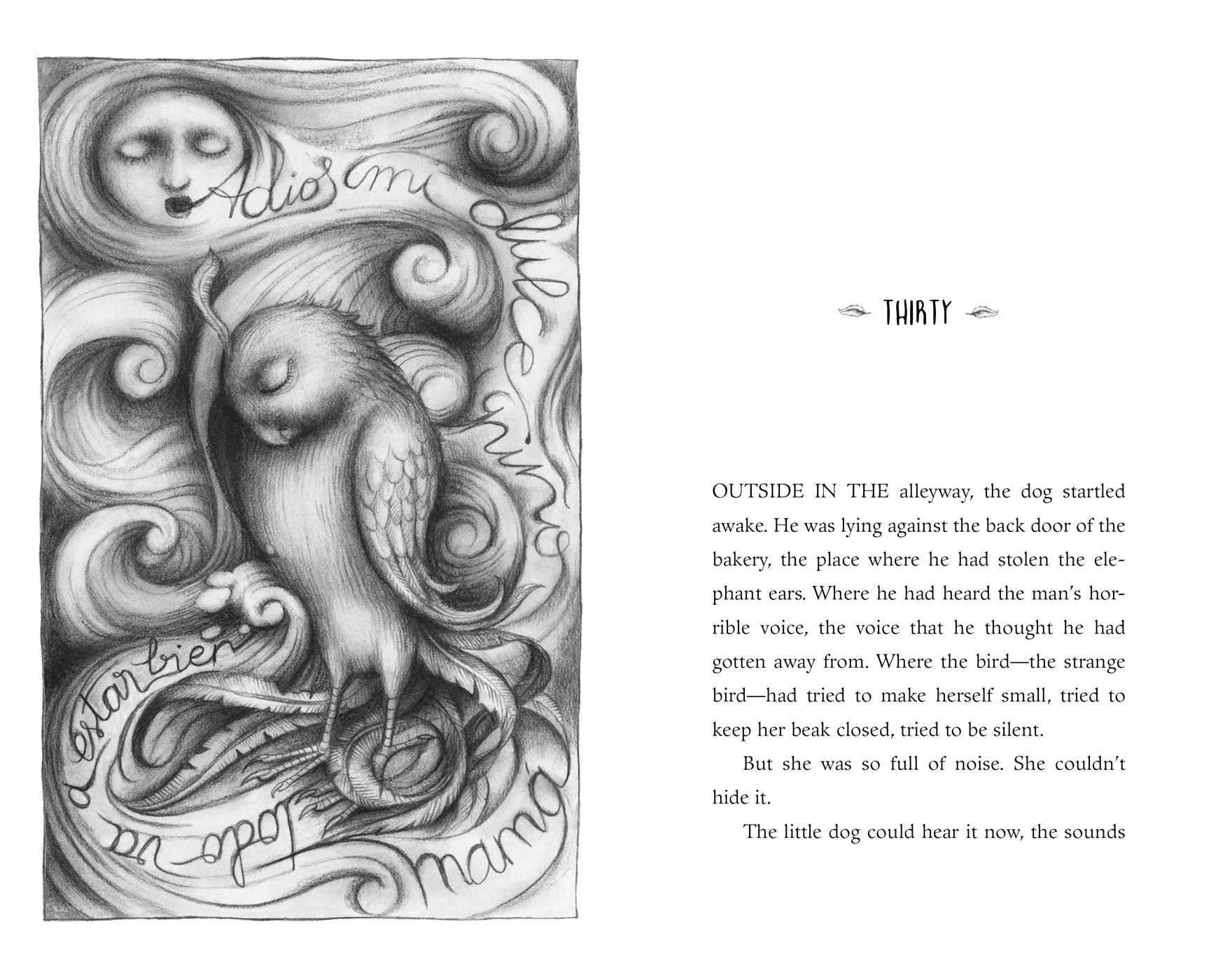 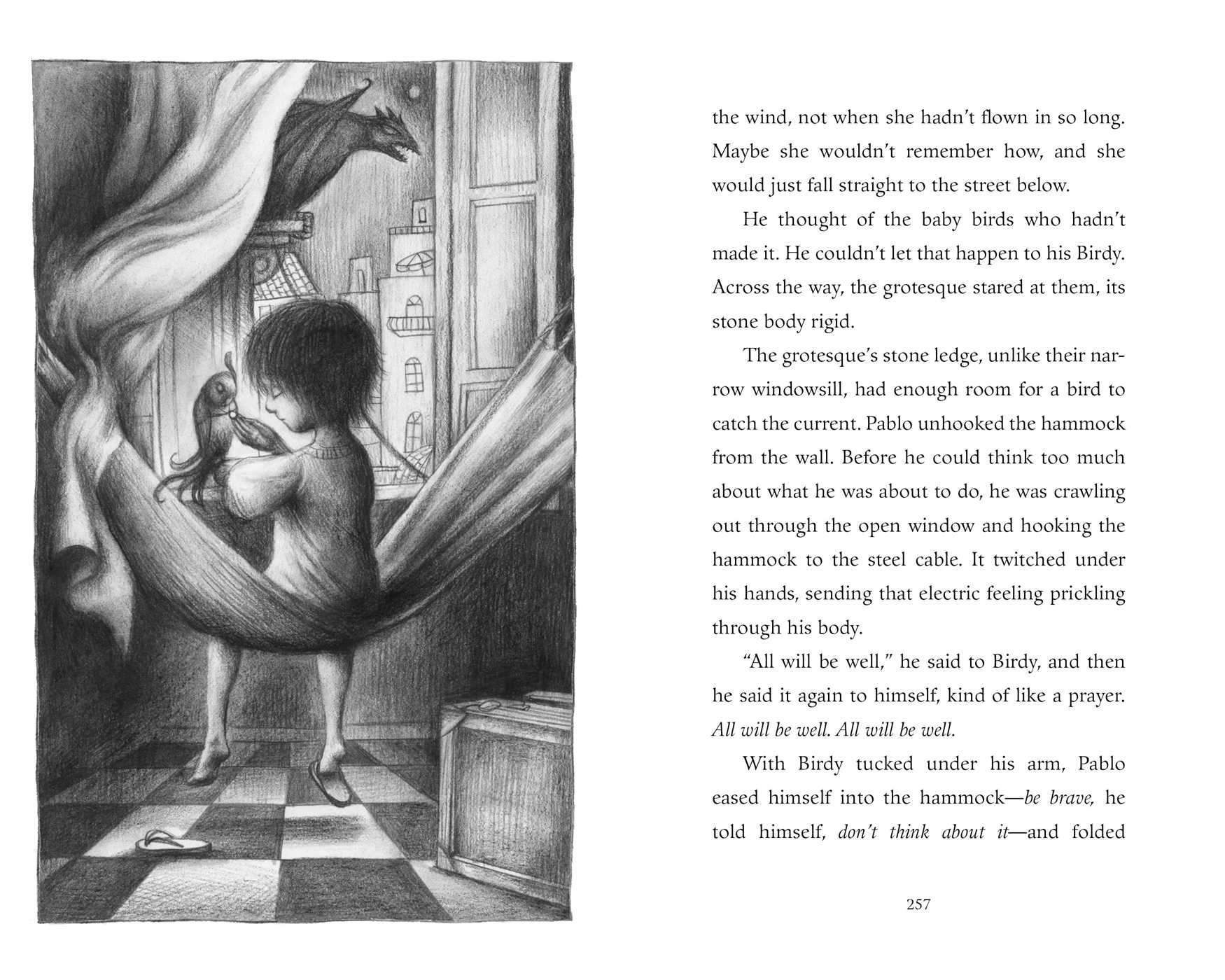 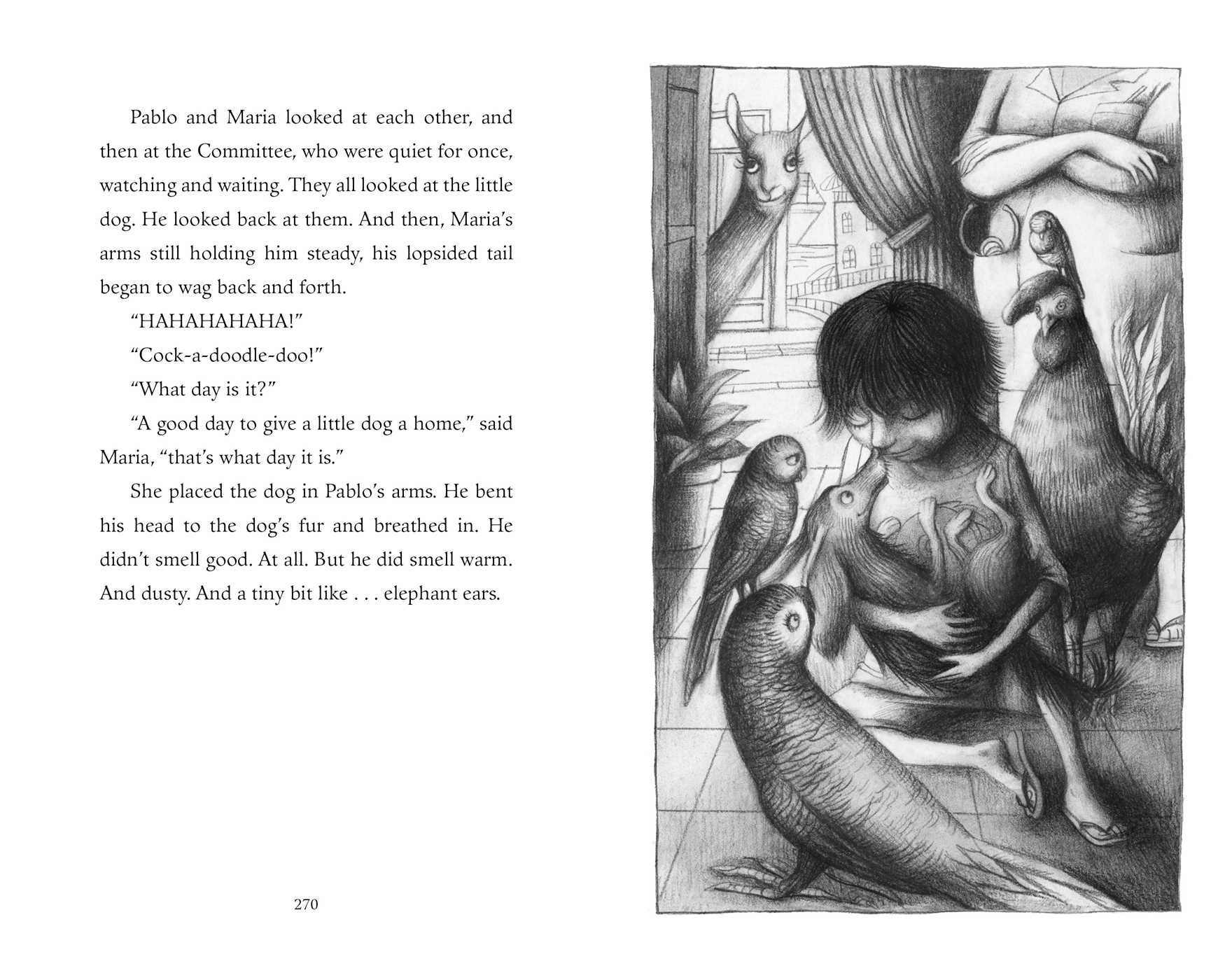 A boy who drifted into the seaside town of Isla as a baby searches for answers about where he and his parrot came from in this “memorable, fantastical tale” (Kirkus Reviews, starred review) from New York Times bestselling author Alison McGhee.

The seaside town of Isla has many stories, the most notable being the legend of the Seafaring Parrot. Locals claim that the Seafarer remembers every sound, every whisper, cry, laugh, or snort ever uttered. But, though there have been rumored Seafarer sightings, no one has actually seen the bird before. Other stories surround a boy named Pablo, who had washed up on shore in a blow-up swimming pool as an infant with only a lavender parrot as a companion. Now, on the eve of his tenth birthday, the stories are repeated.

“At first I thought it was a huge fish,” Emmanuel, the man who found and took Pablo in, says. Pierre, the baker’s guess was a good one: Perhaps Pablo has come from an undiscovered country, one unknown to the rest of the world. Maybe the inhabitants there lived in tree houses, or underground. Or maybe he’s a pirate baby. But Pablo wants the truth, and the only one who might know it is Birdy, his parrot. After all, she was there, holding onto the raft. But unlike most birds who live in Isla, Birdy can neither talk or fly. Or, at least, she never has. Until…one day, when strong winds begin to blow—winds similar to the ones that brought Pablo to shore—Birdy begins to mutter. Could Birdy be a Seafaring parrot? If she is, then she will be able to tell Pablo the true story of where he came from—of who tied him so lovingly and safely to that raft? But, if she is, that also means the second part of the Seafarer myth is true…that Seafaring Parrots will, eventually, fly away.

As Pablo is buzzing with questions, hopes, and fears, an old saying echoes in his mind: winds of change mean fortune lost or fortune gained. And while the winds rise in Isla, Pablo holds tight to Birdy. Would losing his companion, his dearest link to his past, be that loss?

Pablo and Birdy ONE
READY, BIRDY?” PABLO said, and he held out his finger for her. “Up you go.”

Up she jumped. Out the door, careful not to wake Emmanuel, who was asleep behind the closed door of his bedroom, and down the four flights of stairs they went. It was spring, and the town of Isla was quiet at dawn, with the sun just beginning to glimmer on the ocean a few blocks away. But the chickens and pigeons and parrots were already up and about, scratching and clucking around the empty sidewalks.

Soon the shops and cafés would open for business. Soon Pablo and Emmanuel would unlock Seafaring Souvenirs for the day. Pablo would prop open the double doors and wheel the T-shirt racks into the sunshine. Soon the old double-decker red bus would lumber its way down the street, tourists with their sun hats leaning out from the open windows.

Pablo’s bike leaned against the side of their apartment building, hidden behind the bougainvillea. Birdy clung to his forearm, her talons gripping his skin, as he wheeled it out. She jumped into the basket that Pablo had bolted to the handlebars, Pablo swung his leg over the frame, and they were off.

Past Pierre’s Goodies and Lula Tattoo, past the Parrot Café and Maria’s Critter Clinic they went. They took a right at the end of the block, cruised past the Parrot Rescue Sanctuary, through the palm trees, and onto the boardwalk. Pablo leaned the bike against the railing by the wooden stairs that led to the beach and crooked his forearm again for Birdy.

Once they were down by the water, she fluttered to the top of his head and dug in with her talons.

Birdy swatted him on the ear with her wing. Pablo held his pointer finger straight up in the air and Birdy nipped it gently with her beak. There were many parrots who would take advantage of an unguarded finger, but not Birdy. Not when it came to Pablo, anyway.

“Hold on tight now,” he said, and he hopped down onto the sand.

Birdy held on tight. The shoreline was smoothed by the high tide, unmarred by footsteps or paw prints. No one but Pablo and Birdy was out. A lone orange shovel poked up, half-covered with sand, next to a dune. Later today the beach would be busy and noisy with little kids, boogie boarders, fishermen nosing their boats into the marina at the far edge of the harbor, and the coconut man and the pepitas woman trudging barefoot down the beach, hawking their wares. But right now, the beach was all theirs.

“Want to fly?” Pablo asked. Birdy jumped down to his shoulder and ducked her head into his neck. That meant yes.

“Hold on tight then,” he said, and she dug her talons into his shoulder. He put one hand over them for extra measure. “Uno, dos, tres . . .” and down the beach they went. Birdy held on tight, Pablo gradually increased his speed from a jog to a sprint, and then, in a whoosh, Birdy spread her wings as wide as they could go. The breeze blew Pablo’s hair back, and for a moment he felt as if his feet might leave the ground. Was this what flying felt like? Even a little bit? He wished he knew. But Pablo was a boy, not a bird, so he could only guess.

One thing he knew for sure was that this was as close as Birdy ever came to actual flying, and she loved it. She swayed on his shoulder, her talons clinging tight and her head lifted to the breeze. Almost-flying was Pablo and Birdy’s morning ritual. Some people walked their dogs, but Pablo? He flew his bird down the beach. Pablo ran and ran and ran, until he had to stop and catch his breath. They were at the far end of the beach now, no one else around. Only gulls, with their perpetual hunger, wheeled and cried above them, scanning the beach for something to eat. Pablo shaded his eyes and watched them. Birdy’s talons clenched and released on his shoulder. Did she wish that she, too, could soar into the sky? It must be hard to be a bird who couldn’t fly.

“Birdy?” Pablo spoke softly, so that even if someone had been nearby, only Birdy would hear him. He slid his feet forward so that he was standing right at the shoreline. “Do you remember way back all those years ago? When it was just you and me?”

She dug her talons in a bit, her way of letting him know that she was listening.

She shifted her weight from side to side. His fingers found and closed over the necklace he never took off, his Dios me bendiga necklace. The stone pendant, with a tiny hole drilled through it, was strung on a narrow leather band. Pablo kept it hidden beneath his T-shirt. Looking out at the water, it was hard to believe that they were at the edge of an ocean. The waves were tiny right now, sloshing in and out like water in a baby’s bathtub, and they tickled his toes.

“Do you remember the big storm that Emmanuel says came through the day before we got here?”

This was the same question he asked her every year. And every year, she was silent. She dug her talons in a little harder. Still listening.

“It’s that time of year,” Pablo said. “They’re going to start in again.”

Birdy’s talons tightened again. She was the only one he talked to about things like this, and she always let him know she was listening.

Behind them came the soft plop of a coconut, dropping from a palm tree onto the sand. The water wasn’t always calm like this. The ocean had a mind of its own. If it were high tide instead of low, the way it was now, Pablo would be standing underwater. And if the winds whipped up the way they sometimes did, the fronds of the palm trees would be blowing in a single direction. Huge waves were known to roar right over the beach and up the stairs and the boardwalk. When a storm was on the way, the inhabitants of Isla got ready. Pierre nailed boards over the big picture window of his bakery. Lula closed and latched the shutters on Lula Tattoo. Maria gathered up all the animals staying at the clinic and took them to her house, sheltered by the pine forest at the other end of town. Emmanuel and Pablo wheeled in the T-shirt racks, rolled up the awnings, buttressed the double doors with sandbags, and locked up tight.

But today there was no storm and no hint of one on the horizon. The breeze that blew today was soft.

“It’s not even my real birthday,” Pablo muttered. “They should call it my who-knows-what-his-real-birthday-is day. My non-birthday.”

The day after a major storm could bring all manner of flotsam floating in on the waves: pieces of driftwood, the smashed hull of a fishing boat, buoys, bottles, skeletons of enormous fish. Once, even though it was hard to believe, a baby had come floating in to shore.

Pablo had been that baby.

Ana Juan is the illustrator of Elena’s Serenade by Campbell Geeslin, which School Library Journal called “a fascinating adventure that explores issues of gender roles, self-confidence, and the workings of an artist’s heart” in a starred review. Her paintings have appeared on the cover of The New Yorker, on book and album jackets, on film festival posters, and in several European magazines. She is also the illustrator of Frida by Jonah Winter and the author and illustrator of The Night Eater. She lives in Madrid, Spain.