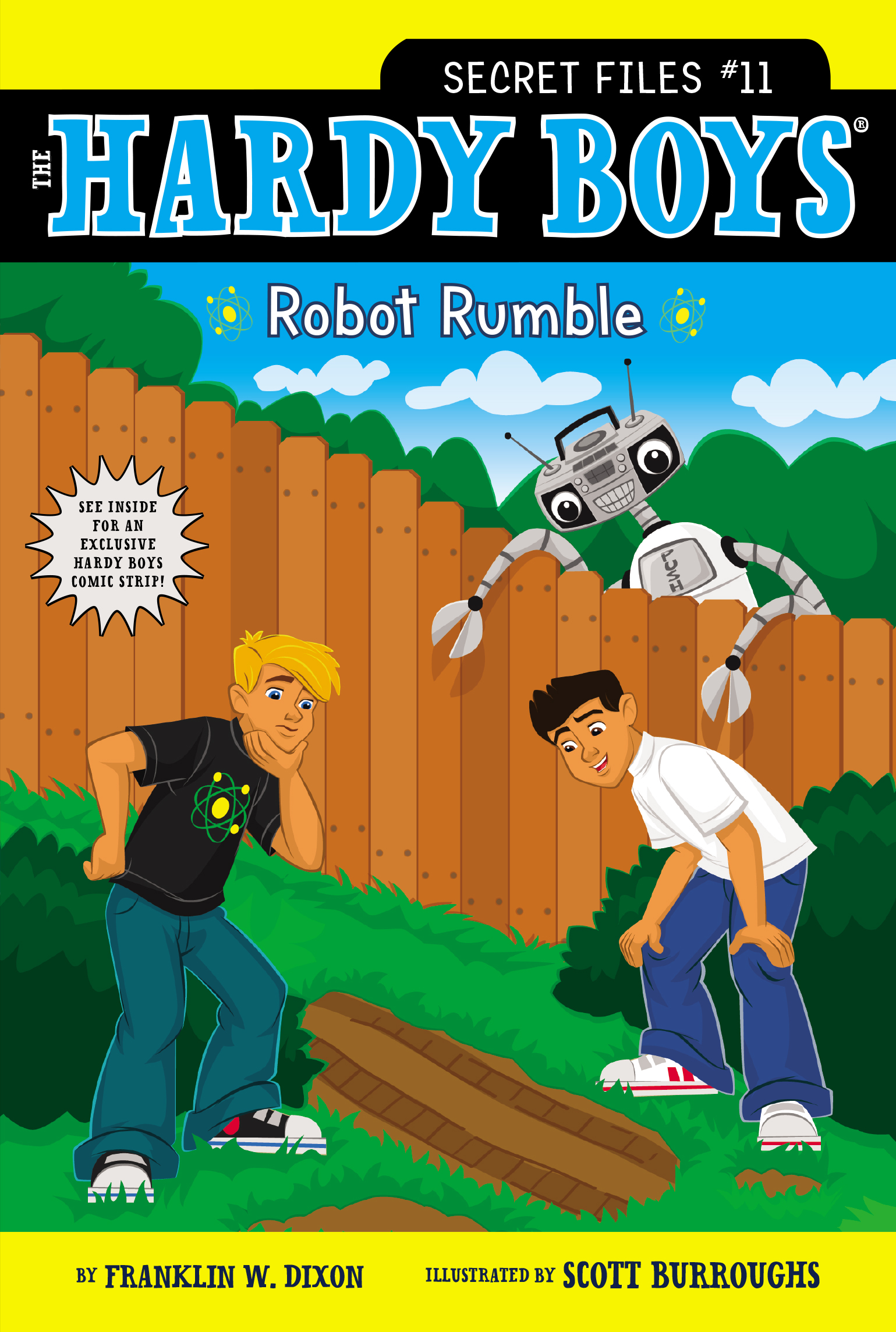 It’s time for the annual Bayport Science Fair, and Frank, Joe, and their friend Phil are determined to have the winning entry. With their spiffy homemade robot, they are convinced they can finally top their classmate, Cissy Zermeno, who has won the past two years.

But right before the boys are about to bring Mr. Roboto to the fair, Phil discovers that their prized creation has gone missing! Did town bully (and usual suspect) Adam Ackerman steal him out of jealousy? Or was Cissy worried she would have to settle for second place this year?

It’s up to the boys to figure out how Mr. Roboto found his way out of Phil’s garage. Will they get him back in time to compete?

Robot Rumble 1 Science Fair Countdown
Joe moved around the cramped garage. He squeezed past cardboard boxes, a pile of rusty rakes and shovels, and the old kitchen table his mom had refused to throw out. The Hardys had two garages side by side. His father parked his car in one, and the other was the place the family stored all the things they didn’t use—like his dad’s collection of posters from old police movies.

Joe grabbed the metal sled propped against the wall. “Look!” he yelled over his shoulder. “What do you think, Frank? I bet we could use this for finishing the robot’s back.”

Joe took the sled out of the garage, careful not to step on any of the old knitting magazines his mom was saving. He dropped the sled on the grass and grabbed the walkie-talkie, pressing the button on the side. “Heard you loud and clear, Frank. Over and out.”

“Requesting assistance at the back exit—” Frank said, his voice interrupted by static.

Joe ran to the back door just in time to open it. Frank strode through, carrying a whole stack of flat silver pans. A few rolls of tinfoil were stacked on top of the pans. “Look what Mom gave me. They have to be good for something, right? Then we can see if Phil can use these old walkie-talkies to make the robot speak.”

“This is perfect,” Joe said. He held up the sled. “I was thinking we could use this to cover its back, where some of the wires stick out. Now we just need to find that silver paint we were looking for. . . . ”

Frank set the pans and foil on the lawn. They had enough to finish up the robot tonight. “I can’t believe the science fair is tomorrow. Those judges would be crazy not to pick us!”

It was Friday afternoon, and at noon the next day was the Bayport Science Fair. Frank and Joe had spent the last three weeks working with one of their best friends, Phil Cohen, on their project.

Phil had been obsessed with electronics ever since they were in first grade. He always had the latest computer or video game. Other kids from Bayport spent their afternoons playing baseball or camping out by the school jungle gym. But Phil took apart computers or helped his mom fix the broken appliances in his house. One time Frank and Joe came over after he had dissected his father’s old treadmill, just to see how it worked.

With Phil on their team this year, the boys decided to make a robot. They’d finished up most of the robot’s insides, and they had already hooked up the parts that made its arms move. Plus, they had a cool feature. Frank had found a busted stereo in the attic, and after Phil fixed it and installed it, if you pushed a button, music came out of the robot’s ears! For the first time, they actually had a real chance of winning the fair.

“I don’t know what Cissy is bringing to the fair this year,” Frank said, “but I sure hope we can compete with it.”

Cissy Zermeño, one of their friends from their baseball team, won the science fair nearly every year. The year before, she’d won by finding out how plants respond to music. The year before that, she did an experiment where she used a plastic tennis ball container to speak underwater. Sometimes it seemed like no one could top Cissy’s projects. The judges, who worked at the Natural History Museum in the city, were always impressed.

“I heard Adam is making another volcano,” Joe said. “It’s probably the same one he used last year.”

Frank shook his head. Normally, he’d feel bad for someone who brought the same project to the science fair every year, but Adam Ackerman was different. He was the biggest bully in Bayport. Kids flinched every time they passed him in the halls. In the last two months he’d put a toad in their friend Callie’s book bag and had threatened to punch Chet Morton just because Chet “looked at him funny.” And he was constantly shoving Phil whenever he saw him. Adam spent so much time in the principal’s office that people joked he had a special seat reserved for him.

“Callie won’t tell anyone what her project is, and Melissa and Todd are keeping theirs a secret too,” Frank added.

“I can’t wait to see what Phil did,” Joe said. They were storing the robot a few blocks away in Phil’s garage. He’d found a used blender at a yard sale and had taken the motor out. Tonight, after they got the last of their supplies, they were going to help him put it in the robot’s neck. With one push of a button, it would make the robot’s head spin! “Who else could make a robot that plays music? Or whose head goes around in circles?”

“Or one that can move its arms like this?” Frank stood perfectly straight, imitating the five-foot-tall robot. He bent his arms at right angles and shuffled around. The whole time he kept his body completely stiff.

“I am the smartest robot on earth,” Joe said in a mechanical voice. He walked around the same way Frank did, each movement stiff. “I will fight you with my laser-beam eyes.”

They kept walking around like that. “Robots will take over the world!” Frank yelled. He raised both his arms in the air. “Robots unite!”

Joe karate-chopped Frank’s shoulder with one flat hand. “I’m a warrior robot from Mars!” he yelled. “I will ruin you!”

They moved across the yard in slow motion and pretended to battle. The whole time Frank’s face never changed. It was perfectly still, like it was made of metal.

“Am I interrupting?” someone with a familiar voice called out. The boys turned to see their dad, Mr. Hardy, standing on the back porch. He was holding a silver paint can. “Were you robots looking for this?”

The boys froze in place, still pretending to be robots. Mr. Hardy didn’t miss a beat. He set the paint can down on the steps and jumped into position, his back straight as he shuffled past them. “I am father robot from Mars!” he said. “I will eat your brains!”

The boys ran from him. He chased them around the yard, then tackled them in one of his big hugs. They laughed so hard their sides hurt. “We need our brains, Dad!” Frank yelled as he wriggled free of Mr. Hardy’s grip. “We have the science fair tomorrow!”