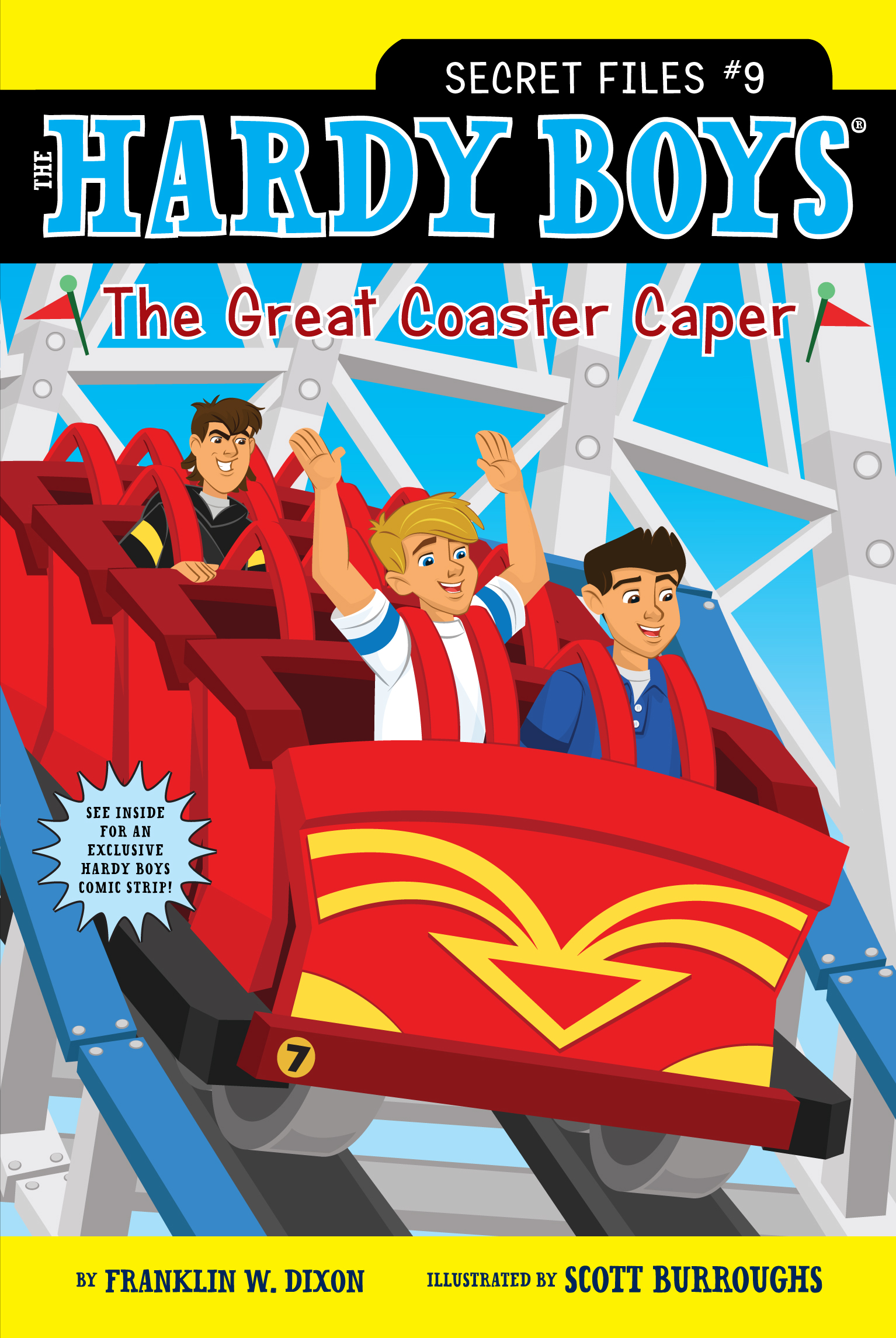 Book #9 of Hardy Boys: The Secret Files
By Franklin W. Dixon
Illustrated by Scott Burroughs
PRICE MAY VARY BY RETAILER

Frank and Joe are excited to learn that Thrill Kingdom, their local amusement park, is having a contest for kids to design a brand-new ride. And they’re even more excited that their friend Phil is entering! The prize? Free passes to the park for the winner and two friends—aka, two Hardy brothers!
But on the day of the contest, someone ruins Phil’s roller coaster contest entry. Since it had been kept in a locked room while awaiting final judging, everyone is confused as to who could have found their way inside. It’s up to Frank and Joe to figure out the twists and turns of this coaster caper!

The Great Coaster Caper  1  Buccaneer Bullies
Eight-year-old Joe Hardy gulped as the cage door snapped shut. It wasn’t the cage of a snarling tiger or a wild gorilla. It was worse—much worse! Joe was locked inside the Tarantula, the scariest, most extreme ride at the thrill park!

“What am I doing here?” Joe shouted. He had always avoided the Tarantula like cooties.

Joe’s nine-year-old brother, Frank, sat across from him inside the cage. “You’re not wimping out, are you, Joe?” Frank asked with a smirk.

Joe gripped the safety bar so tightly he thought his knuckles would crack! “No way!” he squeaked. “Bring it!”

Joe’s stomach dropped as the cage lifted off the ground. He squeezed his eyes shut. This was it … until he felt the steely black cage jerk to a stop.

Did the ride break down? Joe wondered hopefully.

No such luck. In a flash the cage began spinning until everything around Joe was one big dizzying blur!

Flip? “Why did I let you talk me into this ride, Frank Hardy?” Joe yelled. “I must have been craaaaaaazy—”

Joe’s eyes snapped open. He turned his head to see Frank hanging upside down—from his top bunk, not inside a cage!

With a sigh Joe let his head fall back on his pillow. The terrifying Tarantula ride was only a dream. Or nightmare!

“That must have been some dream,” Frank said, flipping down to the floor. “What was it about?”

Joe kept his mouth shut. He had been scared of the Tarantula ride at the Thrill Kingdom amusement park since he was a really little kid. Frank would just tease him like he did all the time.

“Um … I had this dream about zombies, Frank!” Joe said, climbing out of bed. “Seven-foot zombies chasing me all through Bayport.”

“Zombies, huh?” Frank said. “You don’t think it had something do with Phil’s Zooming Zombie Coaster? And the contest today?”

Joe smiled at the thought of the contest at Thrill Kingdom. It was a cool contest just for kids. The rules were to design and build a miniature thrill ride. Not only would the winner get free ride passes for the rest of the summer—his or her ride would replace the old fun house, Buccaneer Cove!

“Phil has got to win first prize,” Frank said. He pulled a neatly folded polo shirt from his dresser drawer. “It’s totally sweet!”

“Because we helped,” Joe said. He grabbed a wrinkled T-shirt draped over a chair. “You helped Phil glue Popsicle sticks to make the tracks. And I ate the Popsicles.”

To prove it, Joe stuck out his tongue. Even though he had brushed his teeth after eating the last pop the night before, his tongue was still streaked with the colors of Freezy Fruity. Joe was totally sick of Freezy Fruity pops, but not of his cool tie-dyed tongue.

Not only did Frank and Joe share a room, they also shared the tree house their father had built for them in the woods behind their house. Besides being a great place to chill, it was also the brothers’ secret detective headquarters. When Frank and Joe weren’t playing softball, hanging out at the arcade, or doing their homework, they were solving mysteries all over the town of Bayport!

Though Frank and Joe were awesome detectives, sometimes they needed their dad’s help. Fenton Hardy was a private investigator, so he knew a thing or two about cracking cases.

“Frank, Joe!” Mrs. Hardy called up the staircase. “Phil and his dad will be here soon. What do you guys want for breakfast? Eggs? Waffles?”

It wasn’t long before Frank and Joe were sitting in the backseat of the Cohen family car, headed for Thrill Kingdom. Phil sat in the middle, his Zooming Zombie Coaster model on his lap. Each boy wore a badge around his neck that would admit him into Thrill Kingdom for the contest.

“I brought some marbles to roll down the tracks,” Phil said. “To demonstrate the direction the cars would go in.”

“The answer is yes!” Phil sighed. “You guys will get my extra ride passes—I’ve told you a million times!”

Joe grinned from ear to ear. “Well, if that’s the case,” he said, “I’m going to ride every ride in the park!”

“As in … the Tarantula?” Frank asked.

“Here’s a challenge,” Frank told Joe. “If Phil’s Zooming Zombie Coaster wins, you’ll brave the Tarantula—once and for all!”

“You’re still too scared to ride the Tarantula?” Phil asked Joe. “No way!”

“I love that Tarantula!” Mr. Cohen said as he drove the car. “If it weren’t for my migraine headaches, I’d ride it every week!”

Joe felt his cheeks burn. Their aunt had not only rode the Tarantula, she’d raised both arms above her head and yelled, “Woo-hoooo!”

“What have you got to lose, Joe?” Phil chuckled. “Besides your lunch!”

“Ha-ha,” Joe muttered. Maybe Phil wouldn’t win. But he wanted Phil to win. And he definitely wanted those free passes to the park!

Mr. Cohen drove up to the Thrill Kingdom gate. Frank and Joe helped lift Phil’s coaster out of the car. Phil stretched his neck to peer over the Popsicle-stick tracks.

“Are you sure you don’t need help carrying your coaster, Phil?” Mr. Cohen asked.

Joe flexed an arm muscle. “And we’re strong like bulls, Mr. Cohen!” he said with a grin.

Mr. Cohen wished Phil luck before driving away. The boys flashed their badges at the booth, then walked through the gate. Thrill Kingdom was packed with people enjoying the rides, games, and food.

Joe tried not to look at the Tarantula as they made their way to the contest hall. But as he aimed his eyes straight ahead, he saw something just as creepy: three beefy-looking pirates waving swords and charging straight toward them!

Book #9 of Hardy Boys: The Secret Files
By Franklin W. Dixon
Illustrated by Scott Burroughs
PRICE MAY VARY BY RETAILER