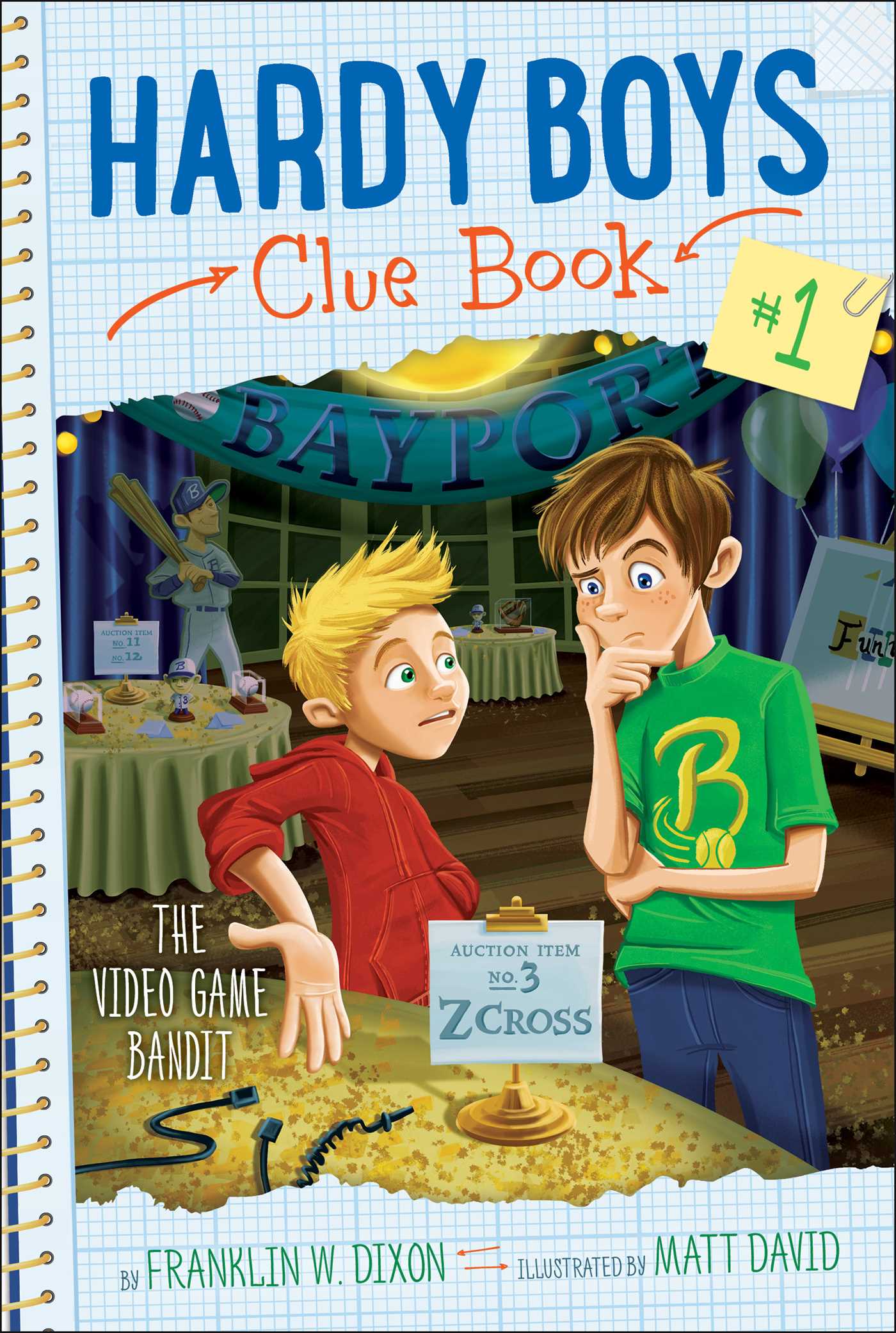 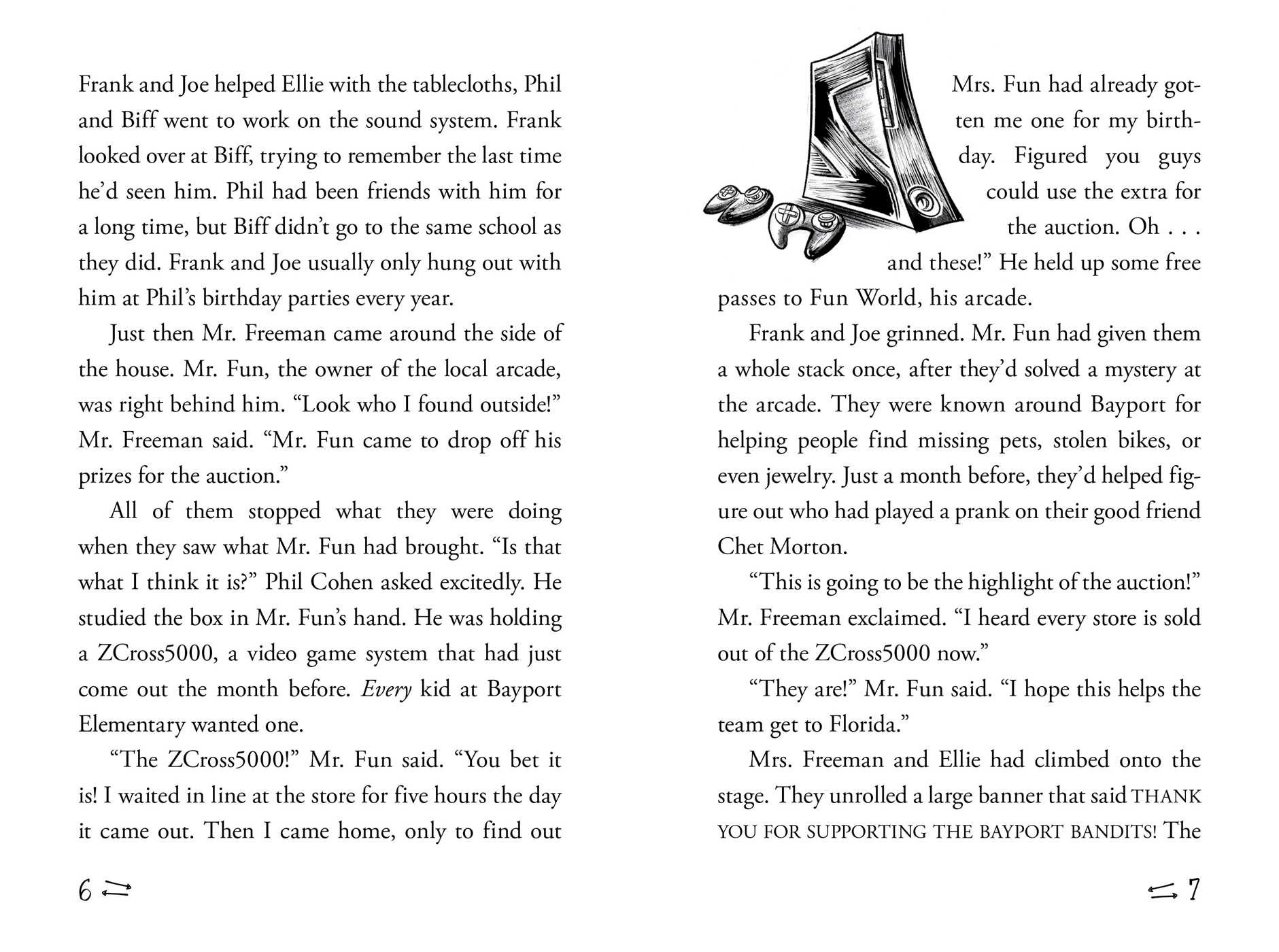 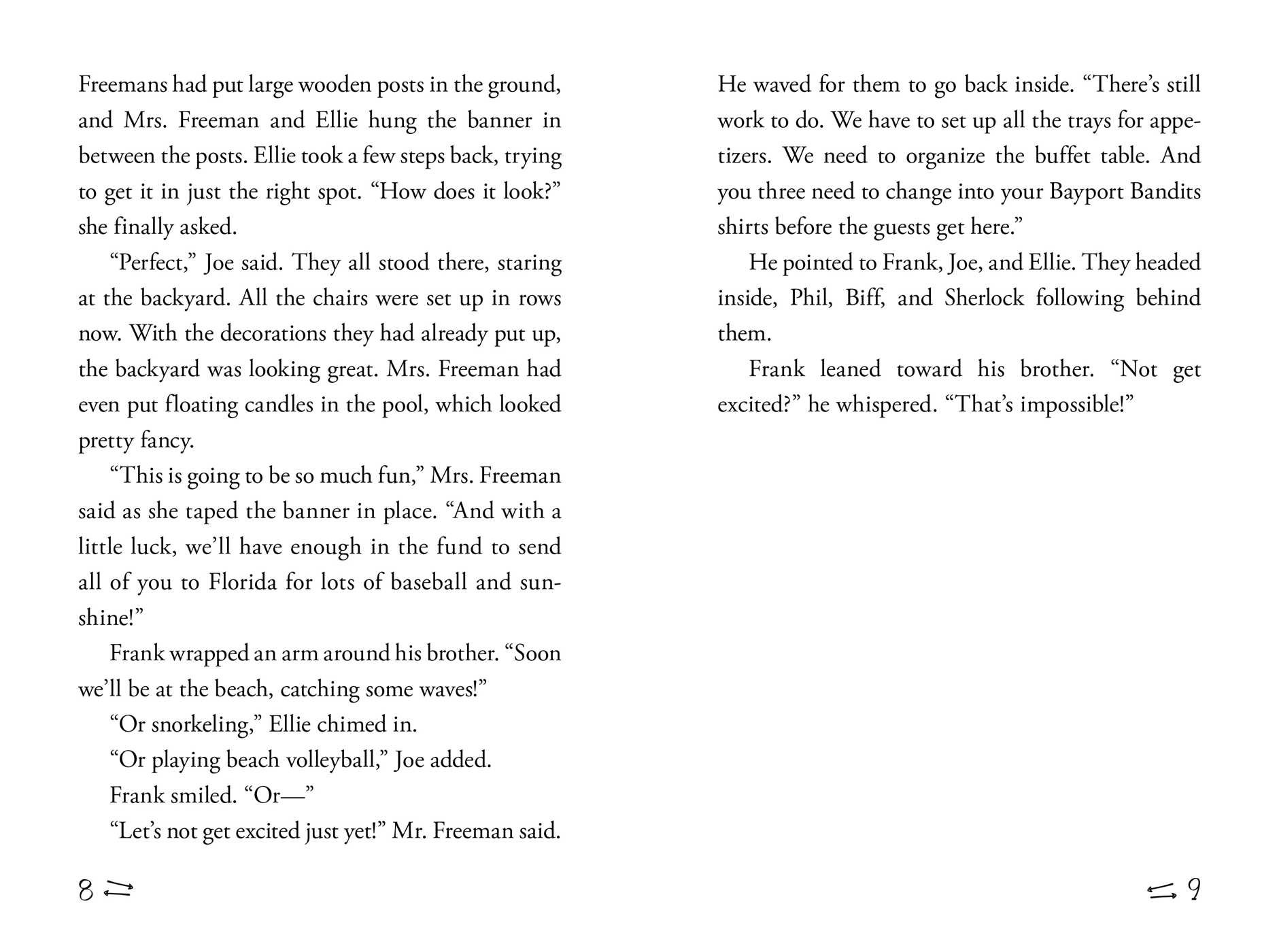 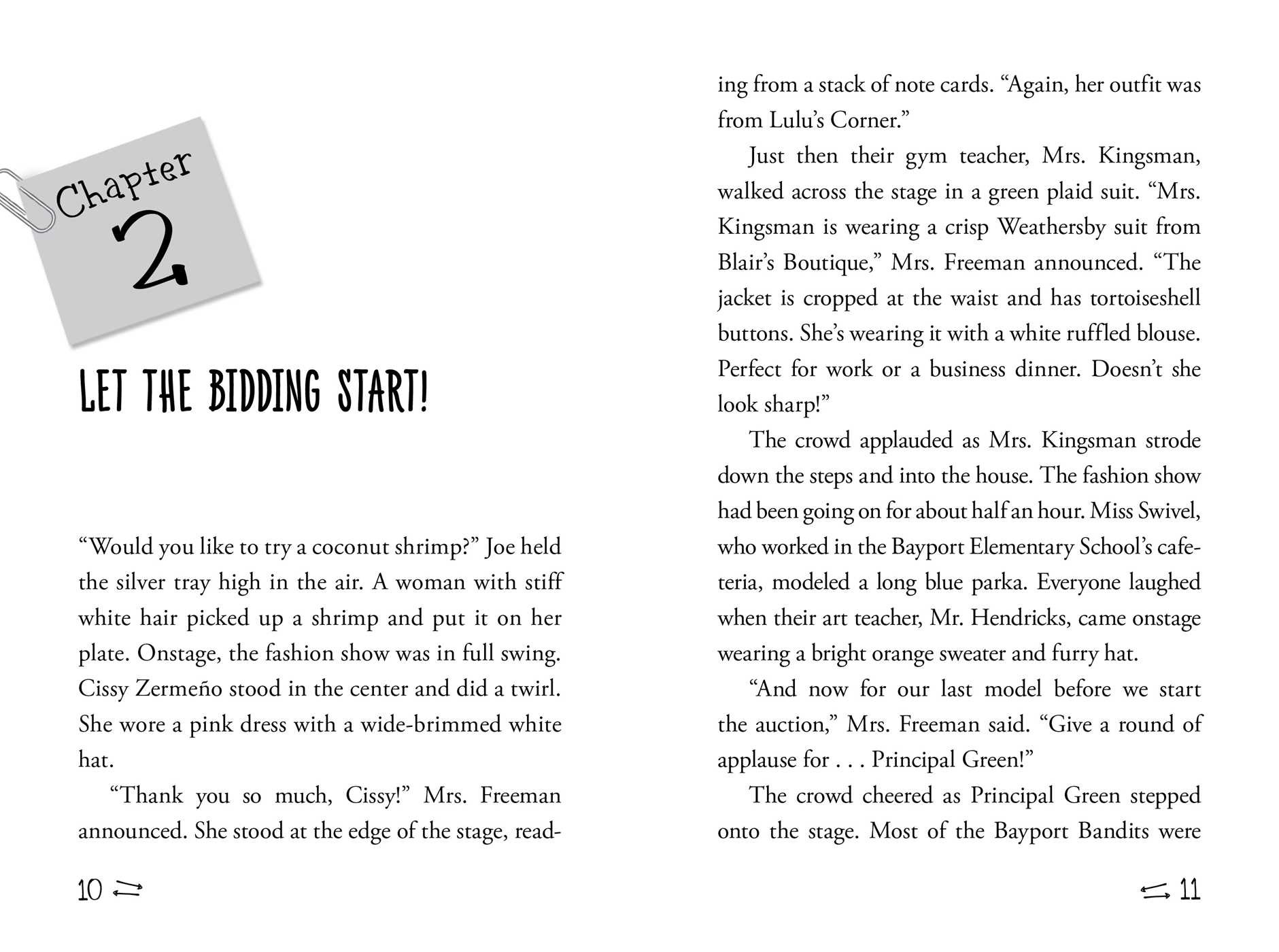 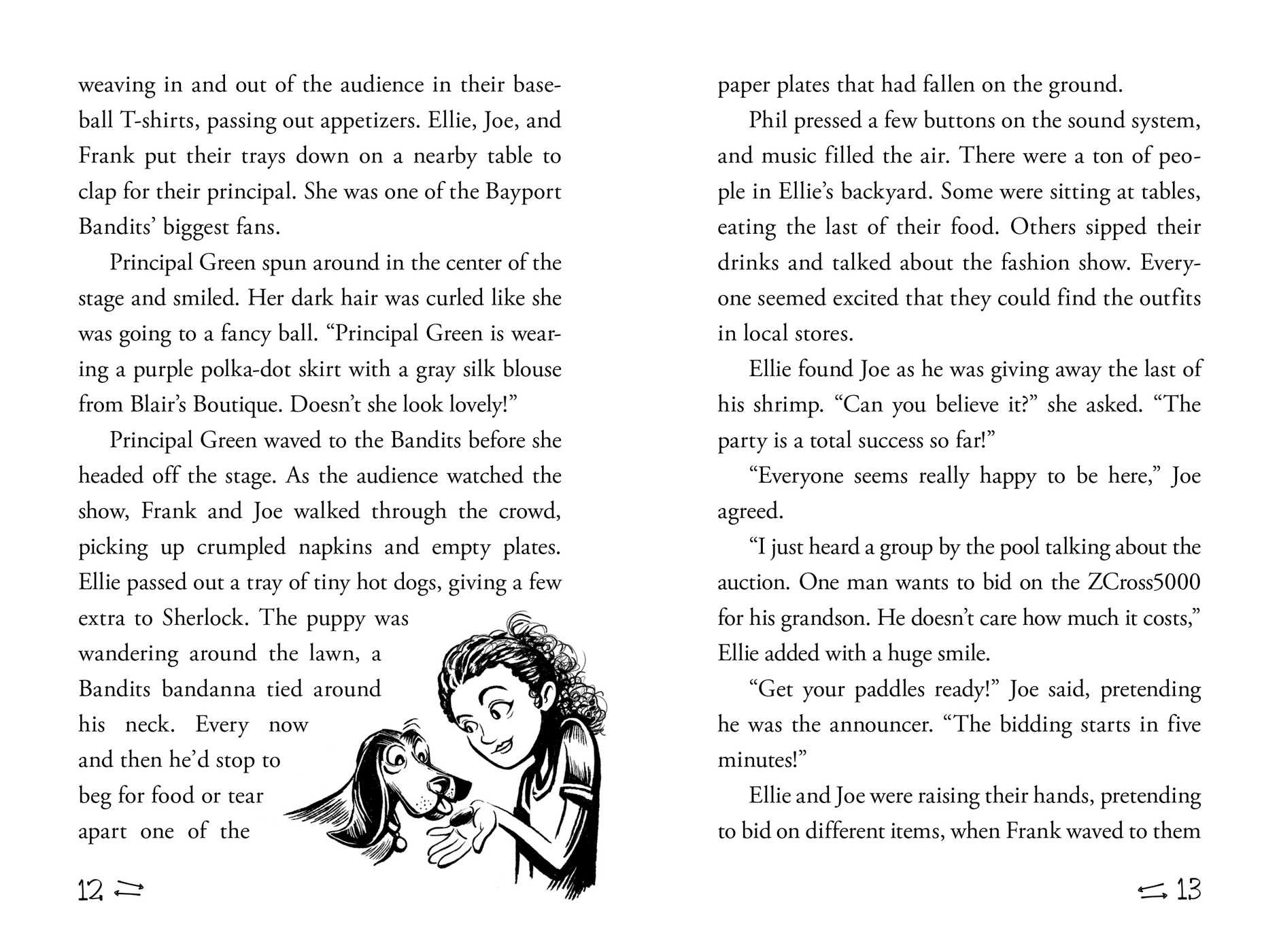 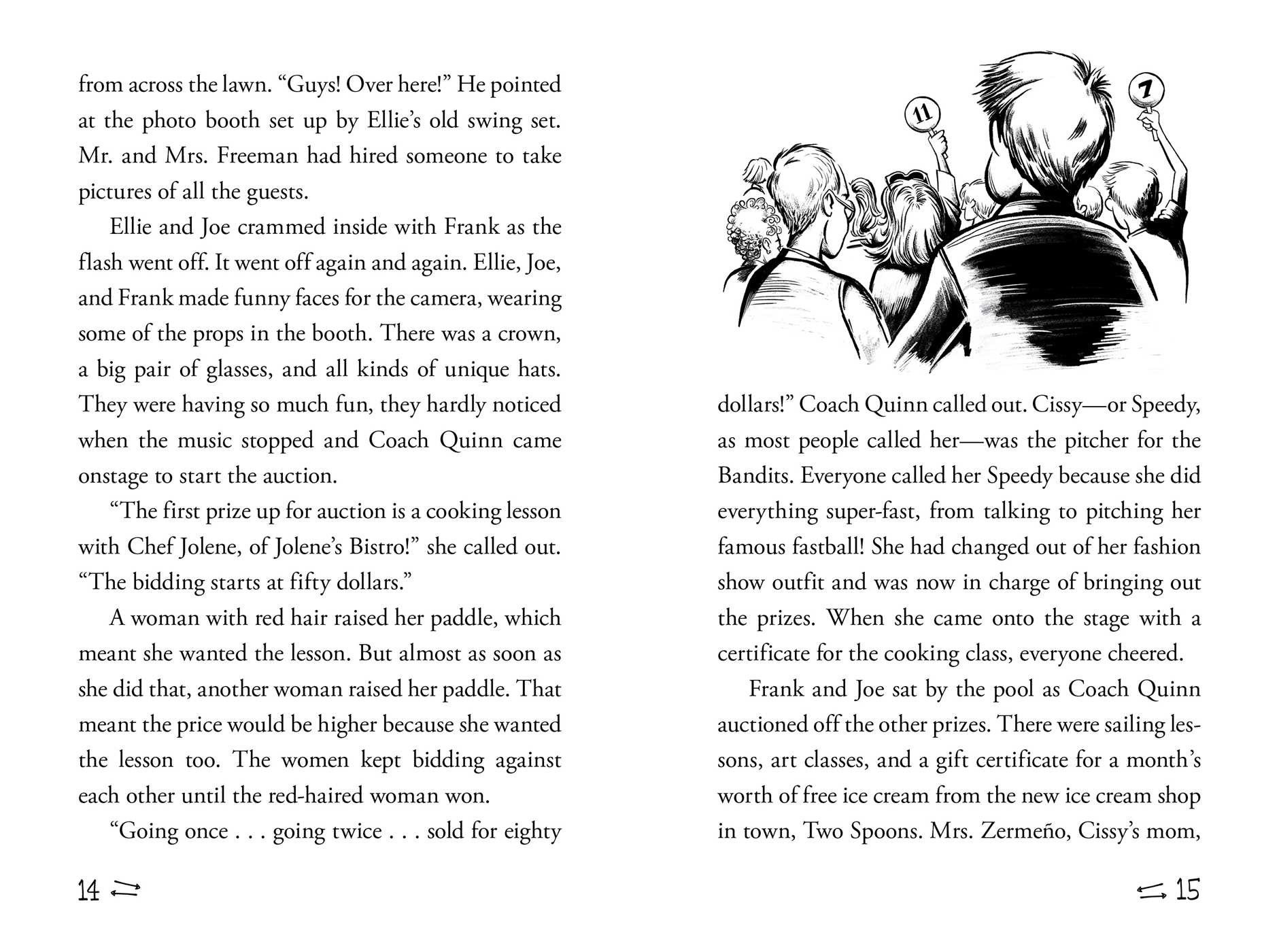 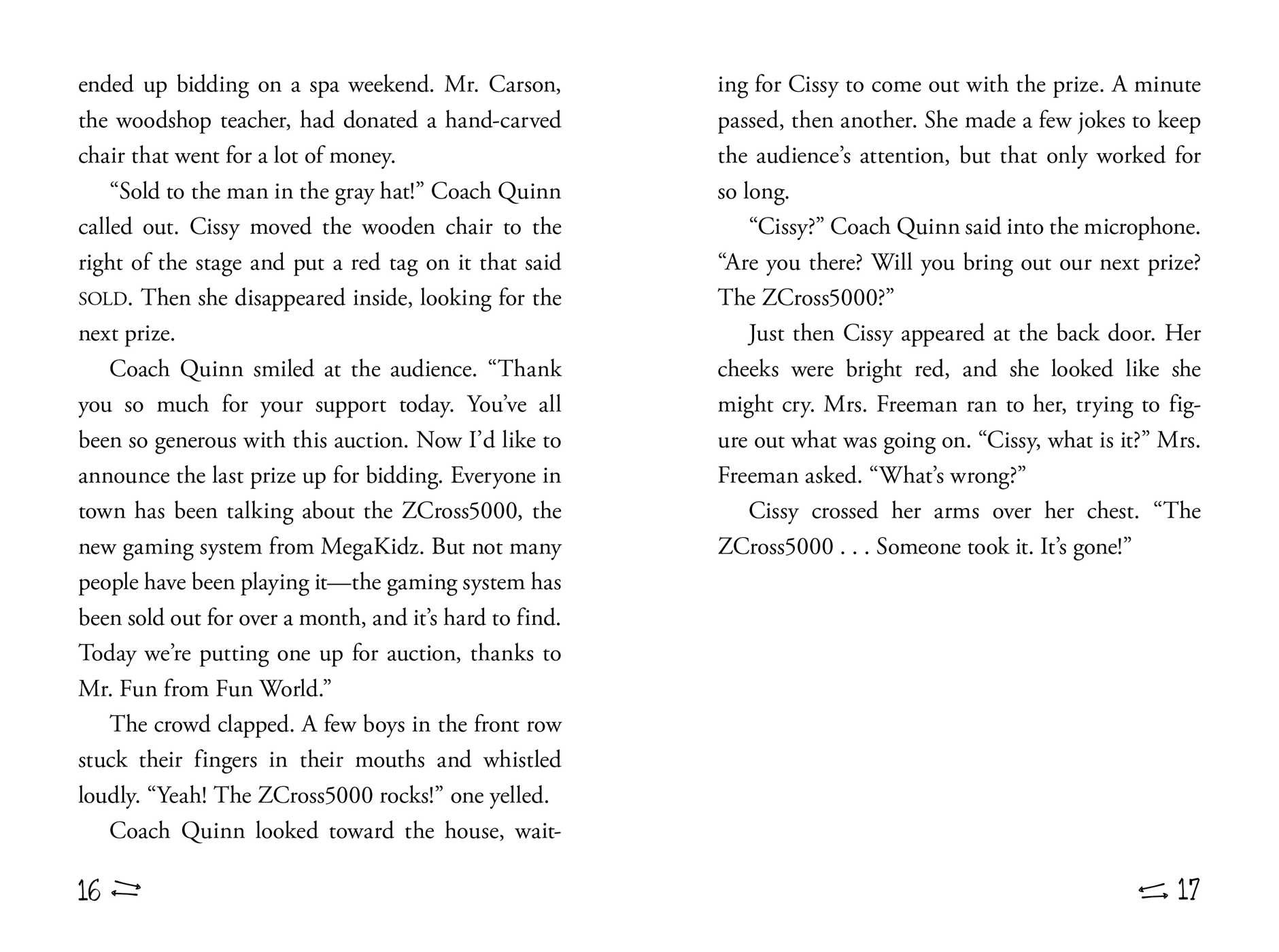 Frank and Joe are on a mission to track down a thief in the first book in an all-new, interactive Hardy Boys chapter book mystery series. Includes space for readers to jot down their own ideas and solutions to the case!

Bayport Elementary is throwing a fundraiser so they can go on an end-of-the-year trip. Ellie Freeman’s parents have volunteered their house for the event, and neighbors have donated all sorts of prizes to be raffled off including movie tickets and gift certificates to Fun World. But the best prize of all is a brand-new ZCross50000, a video game system that every kid has been drooling over.

But sometime during the event, the ZCross goes missing. Can Frank and Jo figure out who took the prize before it’s too late to save the big school trip?

Chapter 1 A PARTY FOR CHAMPIONS
“This way, over here!” Frank Hardy called out. He waved his arms back and forth, signaling his younger brother, Joe. Joe walked across the backyard with a stack of folding chairs. They were kind of heavy, and his face was beet red after carrying them over to Frank and their friend Ellie Freeman.

Frank and Joe’s baseball team, the Bayport Bandits, was having a big fund-raiser. They were hoping to go to Florida on a team trip and play a few friendly games with other teams. In between games the team would be at the beach, snorkeling, paddleboarding, and learning how to surf.

Ellie’s parents had volunteered to host the fund-raiser at their house. They had a big backyard, where they would auction off prizes in honor of the Bayport baseball team. People from all over town had donated things for the auction—a meal at Chez Jean, the fanciest French restaurant in Bayport, sailing lessons, art classes, and a shopping spree at Blair’s Boutique, a cute new store in town.

“What do you need next?” Joe asked Ellie. He dropped the metal chairs on the ground with a clatter.

“I think we need to get the tablecloths from my mom,” Ellie said. She was busy unfolding another stack of chairs and setting them up in a straight line. The stage in the backyard was already assembled, and now they were figuring out where the guests would sit during the auction. A big van from Forks and Knives was parked near the side door of Ellie’s house, and the workers were busy shuttling delicious-looking food from the van into the house. “This party is going to be the best in Bayport history,” Frank said, looking at the decorations they’d just hung up. There were lights and streamers strung across the yard. “Do you think we’ll raise enough to go to Florida?”

“You bet.” Ellie grinned. “The tickets alone will give our fund a huge boost. Then we have the prizes that will be auctioned off and the fashion show—all the boutiques donated clothing just to be part of it.”

“Sounds like we’ll be in Florida in no time,” Joe laughed. He unfolded a chair and set it down next to one of Ellie’s.

With twenty-five kids on the team, it would be expensive to fly everyone down and have them stay at a hotel. They’d already had a bake sale and a car wash. With this huge event, everyone was hoping they would raise all the money they needed to bring every member of the team to Florida for free—or at least to pay for everyone’s plane ticket.

As Frank and Joe helped Ellie set up the rest of the chairs, Mrs. Freeman came out, followed by Phil Cohen, a friend from school. He was carrying a small speaker that he put down by the side of the stage. “You guys remember my friend Biff, right?” Phil asked. He pointed over his shoulder.

A tall blond boy came out of the house with the other speaker. He was wearing a blue T-shirt with the word TIGERS written across it in orange script. Right behind him was a basset hound puppy with long, floppy ears, who scampered down the stairs, tail wagging.

Before Frank or Joe could even respond, the puppy jumped up on them. Frank crouched down as the puppy covered his face with wet kisses.

Biff ran over, grabbing the back of the puppy’s collar. “Come on, Sherlock! Down!” he commanded. “Sorry, he’s still learning,” Biff apologized.

“Sherlock?” Ellie asked, kneeling beside them. She kissed the puppy on the nose. “That’s so cute.”

Phil looked at his friend. “Biff and Sherlock are staying with me for the weekend while Biff’s parents are away. He’s helping me set up the music for the fund-raiser this afternoon,” he said. “I figured we could use an extra hand.”

“Isn’t that nice of him?” Mrs. Freeman said as she darted past. She put a stack of tablecloths on one of the tables. “It’s true, we could use all the help we can get.”

“I just hope this guy doesn’t cause too much trouble,” Biff said, rubbing Sherlock’s head. He looked down at the dog. “You’re going to be a good boy, aren’t you, Sherlock? Aren’t you?”

Sherlock sprinted across the lawn, his ears flying up behind him. He grabbed a branch that had fallen from a nearby tree and started chewing it. As Frank and Joe helped Ellie with the tablecloths, Phil and Biff went to work on the sound system. Frank looked over at Biff, trying to remember the last time he’d seen him. Phil had been friends with him for a long time, but Biff didn’t go to the same school as they did. Frank and Joe usually only hung out with him at Phil’s birthday parties every year.

Just then Mr. Freeman came around the side of the house. Mr. Fun, the owner of the local arcade, was right behind him. “Look who I found outside!” Mr. Freeman said. “Mr. Fun came to drop off his prizes for the auction.”

All of them stopped what they were doing when they saw what Mr. Fun had brought. “Is that what I think it is?” Phil Cohen asked excitedly. He studied the box in Mr. Fun’s hand. He was holding a ZCross5000, a video game system that had just come out the month before. Every kid at Bayport Elementary wanted one.

“The ZCross5000!” Mr. Fun said. “You bet it is! I waited in line at the store for five hours the day it came out. Then I came home, only to find out Mrs. Fun had already gotten me one for my birthday. Figured you guys could use the extra for the auction. Oh . . . and these!” He held up some free passes to Fun World, his arcade.

Frank and Joe grinned. Mr. Fun had given them a whole stack once, after they’d solved a mystery at the arcade. They were known around Bayport for helping people find missing pets, stolen bikes, or even jewelry. Just a month before, they’d helped figure out who had played a prank on their good friend Chet Morton.

“This is going to be the highlight of the auction!” Mr. Freeman exclaimed. “I heard every store is sold out of the ZCross5000 now.”

“They are!” Mr. Fun said. “I hope this helps the team get to Florida.”

Mrs. Freeman and Ellie had climbed onto the stage. They unrolled a large banner that said THANK YOU FOR SUPPORTING THE BAYPORT BANDITS! The Freemans had put large wooden posts in the ground, and Mrs. Freeman and Ellie hung the banner in between the posts. Ellie took a few steps back, trying to get it in just the right spot. “How does it look?” she finally asked.

“Perfect,” Joe said. They all stood there, staring at the backyard. All the chairs were set up in rows now. With the decorations they had already put up, the backyard was looking great. Mrs. Freeman had even put floating candles in the pool, which looked pretty fancy.

“This is going to be so much fun,” Mrs. Freeman said as she taped the banner in place. “And with a little luck, we’ll have enough in the fund to send all of you to Florida for lots of baseball and sunshine!”

Frank wrapped an arm around his brother. “Soon we’ll be at the beach, catching some waves!”

“Or snorkeling,” Ellie chimed in.

“Let’s not get excited just yet!” Mr. Freeman said. He waved for them to go back inside. “There’s still work to do. We have to set up all the trays for appetizers. We need to organize the buffet table. And you three need to change into your Bayport Bandits shirts before the guests get here.”

He pointed to Frank, Joe, and Ellie. They headed inside, Phil, Biff, and Sherlock following behind them.

Frank leaned toward his brother. “Not get excited?” he whispered. “That’s impossible!”
Franklin W. Dixon