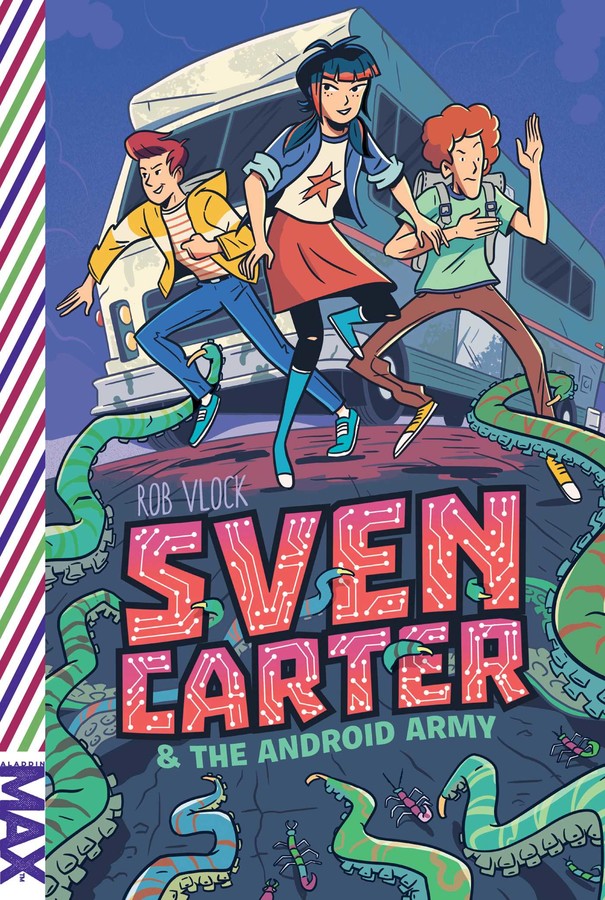 Part of MAX
By Rob Vlock
PRICE MAY VARY BY RETAILER

Sven Carter—part boy, part robot—is back and now it’s up to him to stop the rest of the Ticks from destroying the human race in this fun and funny MAX novel!

All Sven wants is a normal life, or whatever normal means for a Tick—a cyborg who is programmed to destroy the world. His hopes are dashed when he learns that he is just one of the seven Ticks loose in North America. Even worse, he learns about their master plan to destroy the human race.

In an effort to stop them, Sven speeds across the country in a decrepit RV, collecting the rest of the Ticks—ranging from a pop star whose songs can brainwash people into submission, to a dog whose mission is to raise an army of creatures to attack every human in sight.

Everything seems to be going well as Sven convinces the cyborgs to join him in saving the world. But the very last Tick, One Omicron, is nothing like the rest of them. Until One Omicron can be stopped, the world is in more danger than ever.

Sven Carter & the Android Army CHAPTER 1.0: < value= [Face, Meet Anvil] >
WHO KNEW THAT THE TOUGHEST person I’d ever met would melt into a pile of goo three words into a song?

Actually, that’s not exactly true. She hadn’t entirely melted into a pile of goo. Because a pile of goo didn’t have a fist that felt like a five-hundred-pound anvil slamming into your face.

I reached this insight—about the anvil, not the goo—the moment Alicia Toth’s right fist plowed into my face and felled me as efficiently as Godzilla kicking over a miniature Eiffel Tower made of toothpicks.

I should probably explain. Let me rewind a bit.

Junkman Sam’s ancient motor home creaked and groaned as it lurched along I-90. Niagara Falls was two hours behind us. Schenectady was two hours ahead.

I stared out the window, even though there was nothing to look at. It wasn’t light yet, so the only view I had was the reflection of my own face in the glass. When the occasional car would blow by our slow-moving rust bucket, its headlights washed me out of existence for a moment or two until my face reappeared in the darkened window.

“You’re sure he said that, Sven?” Alicia asked for the fifth time. “Those were his exact words?”

For the fifth time, I gave her the same answer. “Yes. I’m sure. He asked if I ever wondered why I was called Seven. Then he laughed and said, ‘A little something for you to ponder when you think of me.’ Only with more stuttering and gurgling because his head was hanging from a gigantic electromagnet.”

I sighed and went back to looking out the window. Dr. Shallix, the cybernetic mastermind behind srok rasplaty—the day of reckoning—a plot to extinguish every human life on Earth, had been dead for hours. Yet he was still making my life miserable. It wasn’t easy coming to terms with the fact that I’d been Shallix’s superweapon—a pawn in his evil plan.

“Maybe he didn’t mean there are other Ticks out there waiting to kill everyone on the planet,” Will suggested hopefully. “Maybe he just meant they screwed up the first six Ticks they tried to build. You know, like it took them seven tries to get it right.” He ran an oversize hand through his tousled red hair in a way that suggested he didn’t believe it himself.

Alicia rounded on him. “And are you willing to bet six billion lives on that?” she snapped.

Before Will could answer, Junkman Sam cleared his throat and called back to us from the driver’s seat. “I think it’s reasonable to assume that since Sven was designated Seven Omicron, there are other Synthetics like him in the Omicron line.”

The color drained out of Will’s face. “Wait! You’re saying there are six more Ticks like Sven out there waiting to exterminate all humans?”

Junkman Sam shrugged. “No, I’m not saying that.”

Will’s sigh turned into a kind of strangled moan. He started flipping an old ashtray open and closed.

That was kind of Will’s thing. He had OCD. Obsessive-compulsive disorder. So when he was scared or stressed or upset, he’d do these little rituals. You know, like turning light switches on and off. Or opening and closing doors. Stuff like that.

Of course, compared to my thing, Will’s thing was nothing. I ate stuff. Gross stuff. Like, for example, a wad of old gum stuck in the ashtray Will was messing with.

“You think they’re all programmed to do the same thing as Sven?” Alicia asked, watching me nearly break my teeth on the decades-old gum. “Incubate superviruses that’ll wipe out humanity?”

Sam scratched his stubbly chin. “Maybe. They may have mass-produced that model and designed each one to function as a disease vector.”

Alicia bit her lip nervously. “If there are that many of those things running around, we’re in big trouble.”

Things. That’s what I was. A thing that was made, not born. A weapon. A Synthetic humanlike object. Thinking about it made my stomach turn.

I walked to the front of the motor home and turned on the radio. I didn’t care what was on. Anything was better than hearing my friends talk about me like I was a thing.

Okay, I take that back. Because Dixon Watts was singing. As usual, it sounded just like a cat that had gotten its tail caught in the door.

Girl, you’re as fine as some really smooth sandpaper.

I want to kiss your face more than a lightsaber.

I reached out to turn to another station.

Junkman Sam’s right hand flew off the steering wheel and slapped my arm away from the radio. “Hey, I love this song.”

I stared at him like he had just told me his father was an onion bagel. “You’re joking, right?” I asked, somehow knowing he wasn’t joking. “I mean, you have to understand just how much this song sucks.”

Girl, I love you like a dog loves its kibble.

Why can’t you love me back just a libble?

Alicia scowled at me. “Take that back! Dix is amazing!”

“Yeah, you must be the only person on Earth who doesn’t love him!” Will added.

“A few weeks ago you didn’t even know who he was!” I countered.

It was true. A month ago, nobody on the planet had heard of Dixon Watts. Then he burst onto the scene like a mushy jack-o’-lantern in December, the biggest teen-pop mega-superstar in the history of music. His song “Girl, You Are My Shredded Wheat” was at the top spot on every chart in the world. And spots two through twelve on those charts were filled with the other songs from his first album. You couldn’t go anywhere without hearing one of those ear-manglers.

“How can you listen to this?” I pressed. “He sounds like a blender full of quarters! No, you know what he sounds like? A garbage disposal full of forks. He’s the worst singer—”

I didn’t get to finish the sentence. Because that was the moment Alicia’s anvil of a fist smashed into my face.

The only good thing about being knocked out by Alicia Toth was that I was unconscious for the rest of Dixon Watts’s song. When I opened my eyes a few minutes later, I was relieved to hear the DJ’s voice oozing in that slick, plasticky tone pop station radio announcers all like to use.

“That was Dix Watts’s mega-superhit ‘Girl, You Are My Shredded Wheat.’ But don’t you dare turn off your radio! Because we’ve just gotten a brand-new surprise release from Dix! Here is ‘Babe, You Are My Scrambled Eggs’!”

One of the worst things I’d ever heard came warbling out of the RV’s speakers.

Babe, you are my scrambled eggs!

I love you and your bacon legs!

“Haven’t I suffered enough?” I blurted through a fat lip, instantly wishing I could bite back the words as I thought about Alicia’s fist and its run-in with my face. What was up with her, anyway? I mean sure, Alicia punching people wasn’t all that unusual. But because of a song? That was a bit much, even for her.

So just relax and don’t put up a fight.

’Cause you know it’s gonna be all right.

But Alicia just sat perfectly still with a weird, vacant look on her face. So did Will and Sam. It was like they were in a trance.

I cleared my throat. “Uh, guys?” I said tentatively.

Will turned and fixed a pair of glazed eyes on me. “Okay? Yeah. Better than okay. Amaaaaazing.”

He said the words flatly, mechanically, drawing out the final A like it was an ice-cream cone he was savoring.

“Will? What’s going on? A few minutes ago you were about to have a freak-out over the other Ticks out there. Now you’re amazing?”

“Ticks?” Alicia intoned emotionlessly. “You know, I’ve been thinking they’re not all that bad. I don’t know why we were all worried about them.”

Not all that bad? Alicia’s parents died at the hands of Ticks back when she lived at the Settlement in the Chernobyl exclusion zone. And you saw how she got when I insulted a song she liked. What was going on here?

Just have a stack of pancake love.

The song! It was doing something to my friends!

I grabbed Will by the shoulders and shook him. “Will! Come on! Wake up!”

But he just stared straight ahead with a half smile on his face.

I slapped her. Normally, something like that probably would have resulted in one or more of my bones being broken. But all Alicia did was sing along with the chorus:

Babe, you are my scrambled eggs!

I love you and your bacon legs!

Time for plan B.

I reached for the volume knob.

Without warning, Junkman Sam sprang from his seat and clamped me into a headlock, his sweat-stained armpit pressing against my ear as he wrestled me away from the radio.

One thought managed to break through the din: Nobody’s driving the motor home!

A grinding sound echoed through the vehicle as we plowed through a guardrail.

All of a sudden, the world was upside down. Instead of the blacktop illuminated by the headlights, all I could see through the windshield were clumps of grass and shrubs. Freed from Sam’s grip as the vehicle jolted and careened, I latched my arm around the back of the passenger seat to try to keep from being smashed to a pulp. The motor home convulsed once . . . twice . . . three times, as it hit little dips on the way down the slope . . . and slammed directly into a tree. 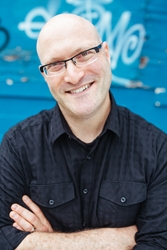 Rob Vlock writes fun, funny, fast-paced kids’ books that are perfect for reluctant readers. When he’s not writing, you can usually find him somewhere in the greater Boston area trying to make his trumpet sound like something other than a dying goose. It’s a work in progress.

Part of MAX
By Rob Vlock
PRICE MAY VARY BY RETAILER