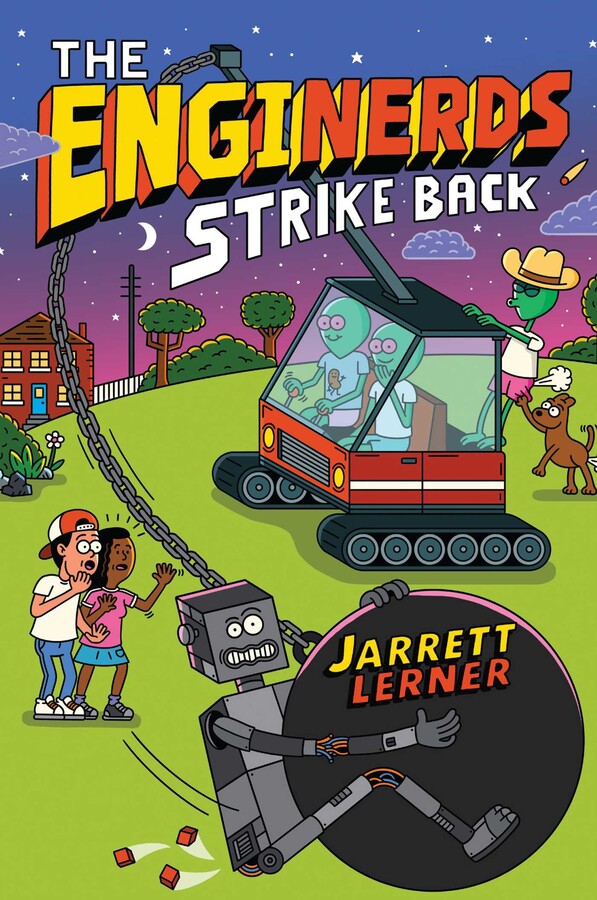 Part of MAX
By Jarrett Lerner
PRICE MAY VARY BY RETAILER

Ken and his EngiNerds crew return in another nutty and nerdy adventure as they face down an alien to save the planet!

Alien invasion? At the end of Revenge of the EngiNerds an alien appeared, and it turns out he’s the real deal. He explains he was sent to Earth as an envoy to scope things out for a planned massive, futuristic billboard—which will mean demolishing the planet! Here? On Earth? In their town? Not if the EngiNerds have anything to say about it. Time to save the day and the planet!

Chapter 1 1.
THE ALIEN, I SHOULD SAY, doesn’t look like an alien.

The kind you see in old TV shows and on the covers of certain science fiction books.

If you walked past this alien on the street, you probably wouldn’t bat an eye. I bet you could even have a quick conversation with him—about the weather, maybe, about the big, somewhat strange-looking cloud you’ve seen floating around in the sky lately—and you wouldn’t think twice of it.

Sure, his eyes are a bit big.

His nose is a tad narrow.

His skin has an odd green-blue tinge to it.

And his voice carries a slight squeak.

But otherwise, he looks and sounds and moves just like a normal kid.

A fact that I managed to entirely forget, even though only moments ago he let a particularly foul one loose with a long, loud FFFffpffweeeeeeeeeeeeeeeeeeeeee-PARP!

I guess learning that your planet is a week or two away from being utterly destroyed can do some damage to your short-term memory.

But that bold step I just took toward the alien landed me right in the fetid heart of his otherworldly fart cloud.

I leap back, gagging, before the gas can utterly destroy my lungs.

“Sorry,” the alien says. “Those Food-Plus veggie burgers are really not sitting well.”

It’s Mikaela. And though I’ve got my eyes squeezed shut, worried as I am that the intergalactic nastiness that recently leaked out of the alien’s backside might melt my corneas, I can tell that Mikaela’s brain is spinning fast as it finally, at long last, puts together the pieces of this puzzle that we’ve all been driving ourselves crazy over for the past few days.

“You took all that food from the Food-Plus,” she says. “And—”

And I crack open my eyes just in time to see him say:

“I caused the blackout. And I made that satellite fall out of the sky, too.”

He’s talking about the out-of-the-blue blackout that left our town without power for two whole hours, and the satellite—you know, those big contraptions that spin around in outer space—that came plummeting out of the sky and crashing in, again, our town. A pair of crazy, inexplicable events that I’d been so sure were caused by Edsley’s rogue robot.

“But those were both accidents,” the alien continues. “The other stuff wasn’t.”

“What other stuff?” he asks.

“The precipitation,” the alien says. “All that snow. And the rain behind that other food store the other day.”

He means the “freak blizzard” that caused our town to cancel school yesterday—in the middle of May—and the sudden, super-intense downpour that drenched me, Dan, Jerry, John Henry Knox, and the last of the butt-blasting bots in back of the Shop & Save.

“You…,” I say, remembering that day, recalling the fear I felt thinking that my life as I knew it was about to come to a screeching halt as those bottomlessly hungry, dangerously flatulent robots overtook us and then took over our town, our country, and maybe even the whole entire world. “You saved us,” I finally finish.

“And I came down here to try to help do it again.” 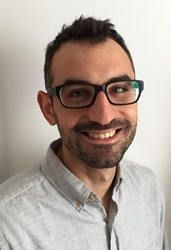 Jarrett Lerner lives with his family in Medford, Massachusetts. You can visit him online at JarrettLerner.com and find him on Twitter and Instagram @Jarrett_Lerner.

Part of MAX
By Jarrett Lerner
PRICE MAY VARY BY RETAILER