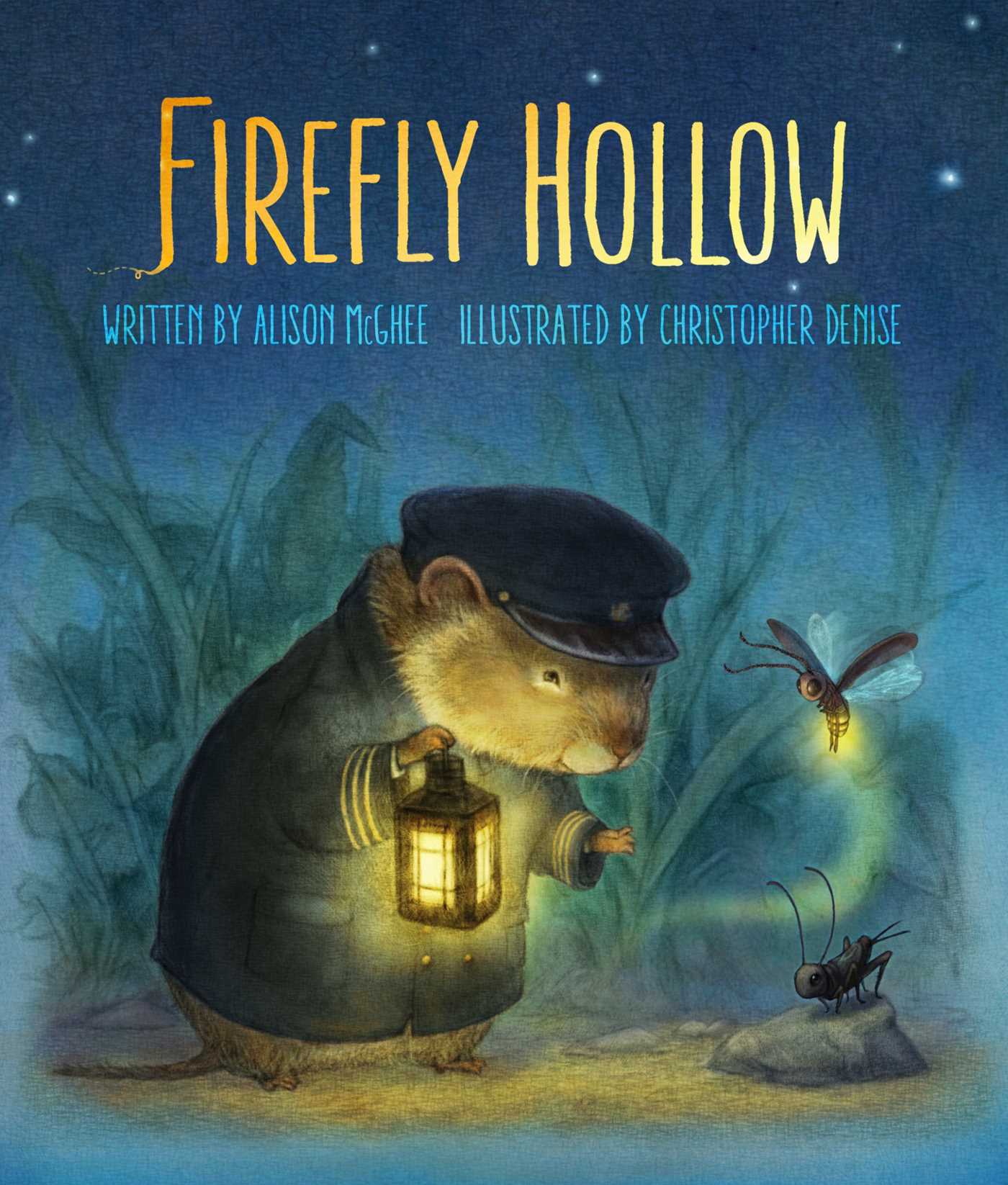 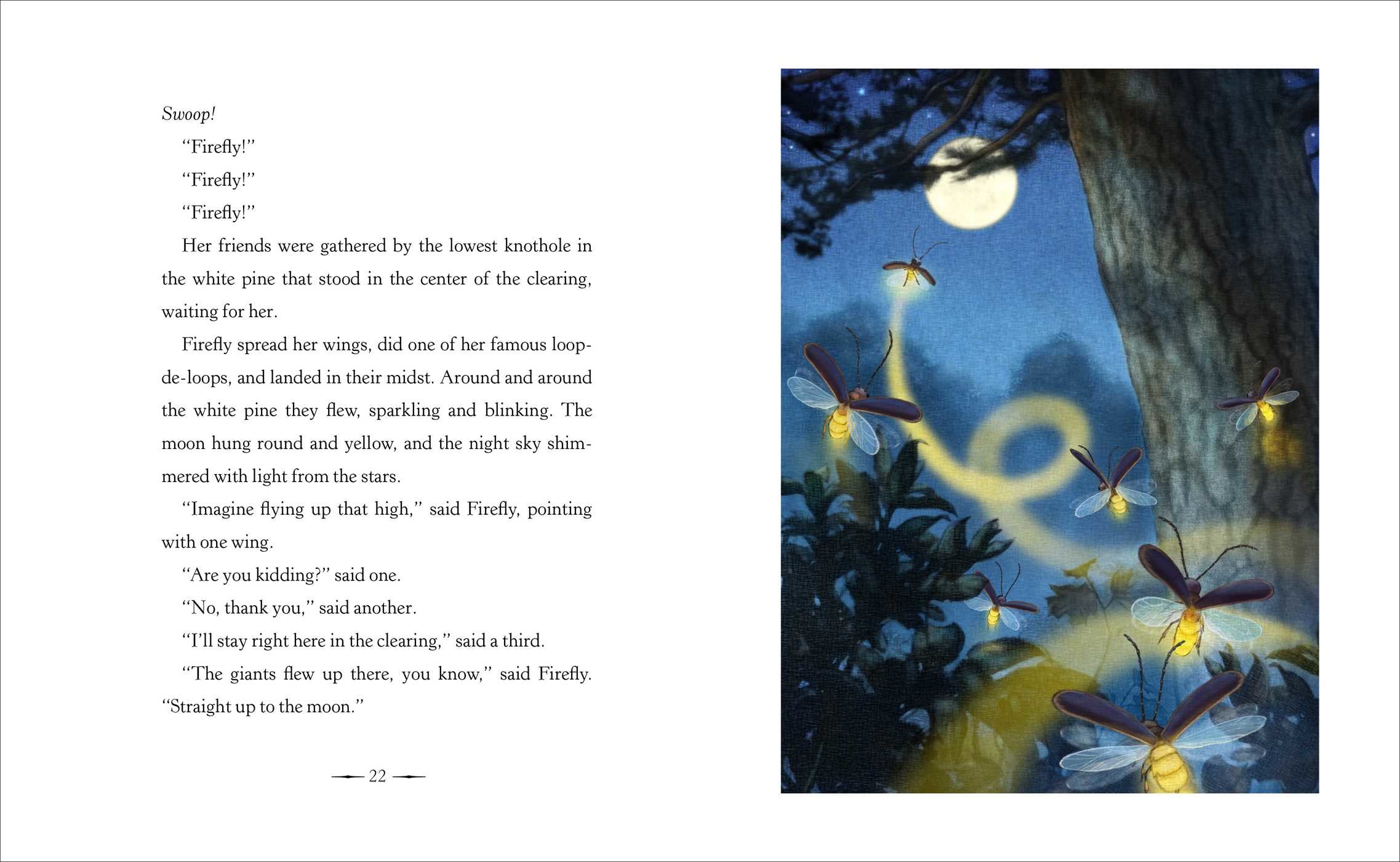 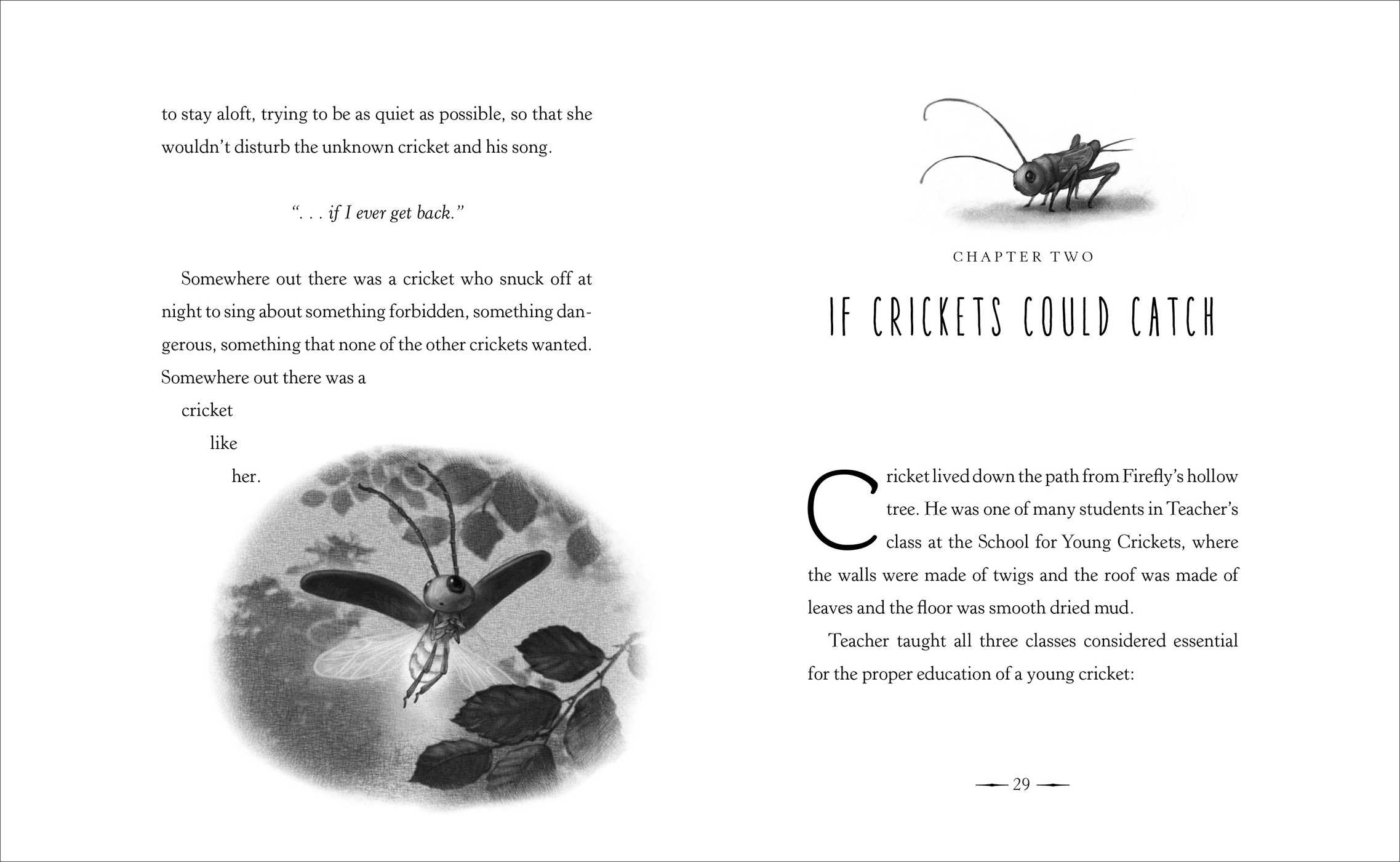 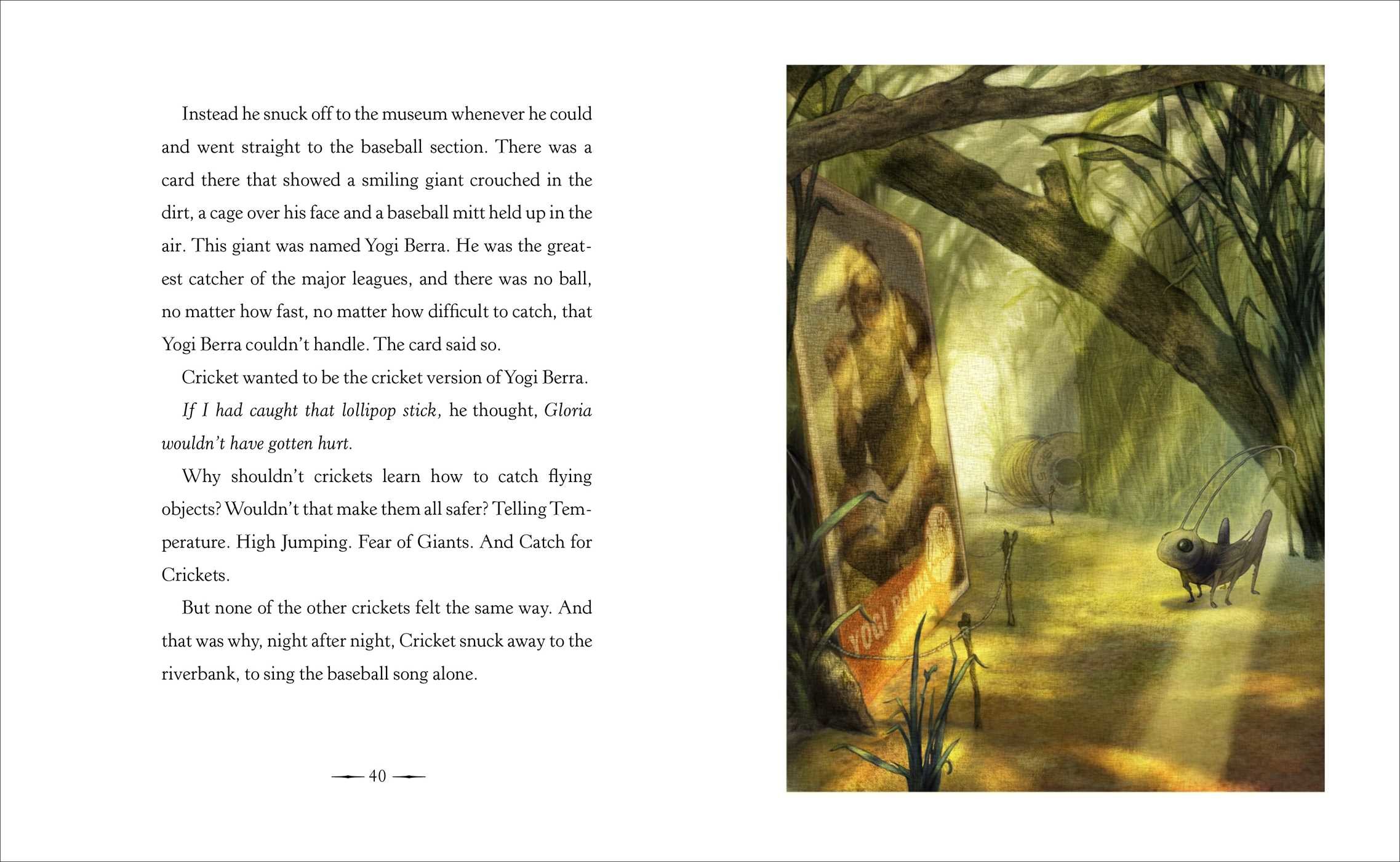 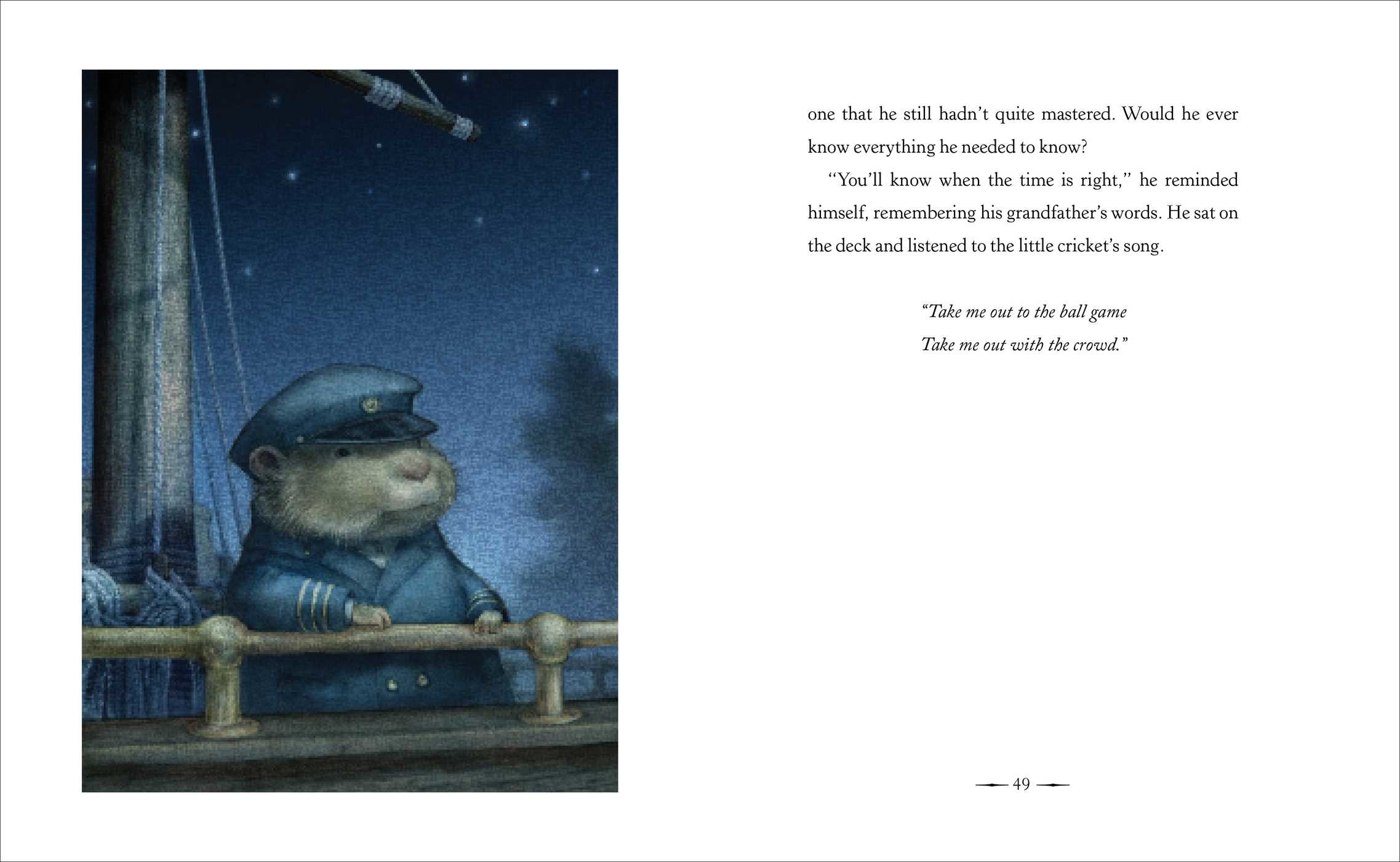 Firefly. Cricket. Vole. Peter. Can four creatures from four very different Nations help one another find their ways in a world that can feel oh-so-big? Delve into this “wise and lovely reading adventure” (Kirkus Reviews, starred review) in the tradition of Charlotte’s Web and The Rats of NIMH, from the author of the New York Times bestselling Someday.

But Peter is a Miniature Giant. They’ve always been told that a Miniature Giant is nothing but a Future Giant, but this one just isn’t quite as big or as scary as the other Giants. Peter has a dream of his own, as well as memories to escape. He is overwhelmed with sadness, and a summer with his new unlikely friends Firefly and Cricket might be just what he needs. Can these friends’ dreams help them overcome the past?

Firefly Hollow is nothing short of enchanting, reminding us all that the very best friend is the one who encourages you to achieve your dreams. Full-color tip-in illustrations and dozens of black-and-white drawings provide added glow.

Cricket and Firefly are different from all the other crickets and fireflies—they have dreams for their lives. Because of this, they’re both seen as strange to the others in the hollow, and they are teased mercilessly, and all because they aren’t just like everybody else. When the two loners run away to meet the miniature giant who lives by the river, they commence on an adventure that may just lead to the fulfillment of their dreams. Young Peter, the miniature giant, can see and hear them, and he teaches them new lessons about life. Cricket and Firefly, with the help of a river vole who is also seeking a dream, ultimately learn that when you follow your dreams, no matter how crazy they might seem to others, life is full of unexpected possibilities.

1. How does Firefly and Elder’s relationship begin? Why does Elder continue to protect and educate Firefly?

2. Why are Firefly’s and Cricket’s classmates so impatient with them? Why do they sometimes say mean things to them? How do their teachers respond both to Firefly and Cricket and the other students?

3. How does Gloria’s accident affect Cricket? How does Cricket use her accident to help him persuade others to think like him?

4. Why is Vole the only river vole left on the river? What is Vole’s dream? How does he work to achieve it?

5. How does Cricket’s song bring him and Firefly together? What do they do the first night they meet?

7. What does Peter do and say when he steps out of his house and meets Cricket and Firefly?

8. Why are Cricket, Firefly, and Vole so surprised when they meet? What do they learn about each other?

9. Why does Vole watch Cricket, Firefly, and Peter? What are Vole’s observations and conclusions about the meeting?

10. Why does Vole catch the milk jug and place it on the rock where Peter will find it?

11. Why does Firefly practice her flying maneuvers every day? Why does she practice the parachute formation alone, away from all of the other fireflies?

12. What prompts Cricket to run away from his home and from the other crickets? What is his plan?

13. Why does Firefly decide to leave Firefly Hollow? What secret does she tell that gets her in trouble? Why can’t Elder come to her rescue?

14. Why do Peter’s mother and father think Firefly and Cricket are imaginary? How do Cricket and Firefly react?

15. How do Firefly and Cricket meet Vole? What do Cricket and Firefly decide to do that night?

16. Why doesn’t Peter want to return to school? What is his plan to avoid going? How do Peter’s parents react to the news that he is not going to school?

17. How does Peter teach Cricket to catch? What is the first thing Cricket catches?

19. What do Firefly and Cricket miss about their homes? As summer ends, what are Firefly’s and Cricket’s plans for the fall and winter?

20. How does Peter react to a new family moving in on his street? Who might have lived in the house before the new family?

21. When Firefly sneaks away from Cricket to return to Firefly Hollow, what does she overhear the other fireflies talking about? How does Firefly react?

22. Why do the crickets and fireflies leave their homes to talk to Vole? What do they learn about Cricket and Firefly?

23. What does Firefly see when she attempts to fly to the moon? How does it affect her flight?

24. How do Peter and Cricket help save Firefly? What happens when the raft sinks?

25. When Peter returns to school, what happens to his relationships with Firefly and Cricket?

27. Why does Vole want to return the paper boat to his boy? Why doesn’t he need it anymore?

28. Why do Cricket and Firefly decide to leave with Vole? How do they say goodbye to Peter?

Cricket, Firefly, Vole, and Peter all have a dream. Select one of the characters and write down the selected character’s dream and how the character plans to achieve it. Then write a narrative poem that tells the story of how that character achieves the dream. Have students read their poems to others in groups of four to six. Post the finished poems in the classroom.

In the book, Vole explains to Cricket and Firefly what a kindred spirit is. Working in small discussion groups, have students use Vole’s explanation as a starting point to discuss why Firefly, Cricket, Vole, and Peter could be considered kindred spirits and to locate textual support from the book. After all groups have had the opportunity to discuss the kindred spirits, have each group share their insights with the whole class.

From Script to Action!

Select a scene in the book that would make a good skit. Have students work in groups of four to write a script with original dialogue and to practice the skit before performing it for the class.

Investigate the Characters—Ground, Air, and Water

Have students investigate the characteristics of crickets, fireflies, and/or voles. Working in small groups, have students explain to the others in their group what a typical day and then a year would be like in the life of a cricket, firefly, or vole. Based on what is shared, each group should synthesize their information and write and illustrate a nonfiction children’s book on the wonders of crickets, fireflies, and voles. Display the children’s book in the school library.

Giants in the Land

Advice from the Wise

Vole had experience with Peter’s father when he was a miniature giant. In small groups, ask students to write a list of ten “Tips for Dealing with Miniature Giants” for Firefly and Cricket.

Everyone Needs a Friend

Perhaps one of the reasons Peter could communicate with Firefly and Cricket is because he had lost the only friend he had and did not want to make any new ones. Ask students to write about their best friend and their relationship, including how they met and why they are best friends. Students can share their writing with the class or in small groups.

Christopher Denise is an award winning children’s book illustrator and visual development artist. His books have appeared on the New York Times bestseller list and have been recognized by Bank Street College of Education, Parents’ Choice Foundation, and the Society of Illustrators Annual Exhibition. Christopher Denise lives with his family in Rhode Island.

SEE ALL
See more by Alison McGhee
Thank you for signing up, fellow book lover!