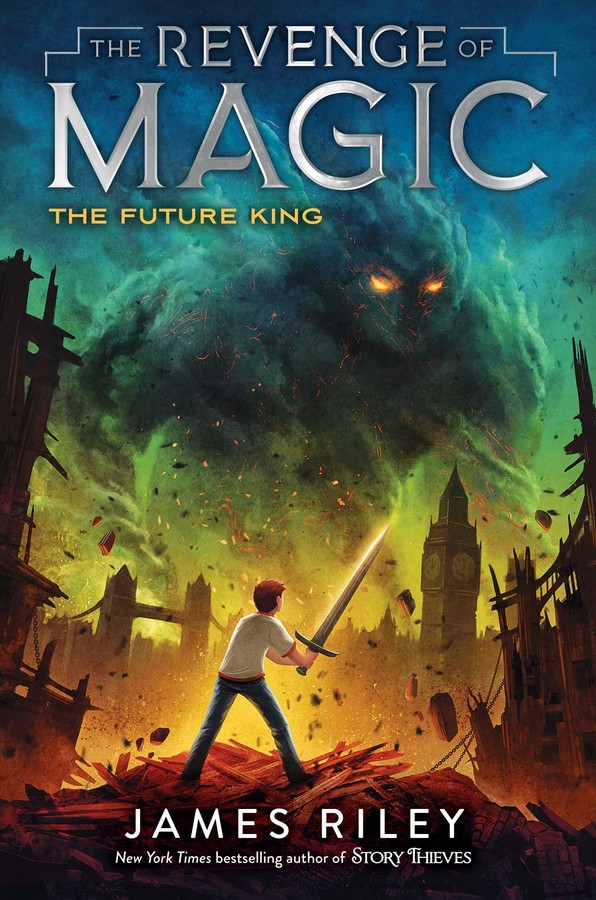 Fort’s continued adventures take more surprising twists and turns in this third novel in a thrilling series from the author of the New York Times bestselling Story Thieves!

Dealing with monster attacks and his missing father has been hard enough for Fort Fitzgerald in his first month at the Oppenheimer School. But there’s another school for magic, this one in the United Kingdom, that's about to create even bigger problems.

Six of the Carmarthen Academy students found themselves lost in time when they first started learning magic. Now they’ve returned, with news of a coming war that the students claim only they can stop.

But their new plan for the world might lead to an even worse future, one that Fort and his friends are destined to help bring about, no matter how much they might want to fight it.

Can Fort change the future that the Time students have already seen play out? Or is he destined to pay for his past mistakes for all of time?

Chapter 1 - ONE -
SINCE THIS IS YOUR FIRST briefing, I’d just stay quiet and listen,” Dr. Ambrose said to Fort as they waited for the elevator in the slowly transforming hall of the new Oppenheimer School. The walls were being repainted from an awful puke green to a less horrible camouflage green, and all the posters talking about some “Red Scare” were being replaced with warnings about magic and not talking to strange creatures.

“I doubt I’ll have anything to say anyway,” Fort told her, still barely sure what was even happening. Just a few moments ago Dr. Ambrose, the Healing teacher at the school, had collected Fort from his room to head to this mysterious military briefing.

All Fort knew was that according to the short news video Dr. Ambrose had shown him, an enormous black dome now covered the lower half of the United Kingdom. That, and whoever had made the dome wanted Fort—along with his friends Rachel and Jia—handed over to them.

Because of course they did. Just when everything seemed to be getting a little better, this had to happen.

In the last week or so, things had been a bit … chaotic for Fort. He’d learned enough Summoning magic to travel between dimensions in the search for the monsters who had taken his father, while also fighting against a dragon, a city of dwarfs, and his own roommate, Gabriel. And that had been the easy stuff.

The truly terrifying creatures Fort had faced were the three Old Ones, creatures as old as time with a hatred of the human race. The Old Ones had tried to offer Gabriel his missing brother back in exchange for the whereabouts of the last dragon on earth. Only it turned out that dragon was actually Damian, a boy from the original class of the Oppenheimer School.

But through all of that, the one thing that had kept Fort going was the idea that he might find his father alive and bring him home. And somehow, someway, he had. Fort had located his father, who’d been turned into one of those same monsters that had taken his dad in the first place. Then Fort had restored his humanity and brought him home.

Things still weren’t totally fixed. His dad had fallen unconscious as soon as he turned back into himself and hadn’t woken up since. Plus, Dr. Ambrose had apparently found something weird in his dad’s tests. So all Fort wanted to do was go back to his father, hug him tight, and take him home.

The elevator dinged, and the doors opened. “Colonel Charles came back especially for this emergency, after taking his son Gabriel home,” Dr. Ambrose told Fort. “And he’s none too thrilled with you, I might add, considering what happened.”

Fort nodded silently but inwardly wondered how that was different from any other moment at the school. The only time the colonel had seemed to be on Fort’s side had been when he assigned Fort to be Gabriel’s roommate and basically ordered them to become friends. Gabriel hadn’t taken that order very well, but they’d actually had fun anyway.

That was all over now. The last time he’d seen Gabriel, in fact, the other boy had been threatening to drop him into a volcano if Fort didn’t take him back to the dimension where his younger brother had chosen to remain with the Old Ones.

Fort sighed, wondering how much worse things could get. “Do you know what the dome people want with us?” he asked Dr. Ambrose. “How would they even know our names?”

“Well, considering you were on international news flying with a dragon yesterday, it might have something to do with that,” Dr. Ambrose said with a shrug. “Or maybe they want you because you’ve faced those Draci monsters twice now.”

“Right, that’s what matters now, correcting me about a made-up word,” Dr. Ambrose said, and somehow, her annoyance made Fort feel a bit less like things were completely out of control.

Still, the thought of what might be waiting for him in the briefing sent a chill down Fort’s spine. Who could have put the dome up? The Old Ones seemed like the most obvious answer, but if they had found a way back, then it wasn’t just the UK that was in danger: The entire world would be next.

And if that was the case, Fort wished Dr. Ambrose had left him with his father. He’d just gotten to see him again after everything. Who knew when his dad would wake up, if he even would?

“Try not to be too scared,” Dr. Ambrose said, patting his shoulder awkwardly. “I’m sure the colonel won’t send you three into—”

She stopped in the middle of her sentence right as the elevator did too. But the doors didn’t open in front of them, and when Fort glanced up at Dr. Ambrose, he found her mouth open like she was still speaking.

“Dr. Ambrose?” he said, fear beginning to spread through him. “Dr. Ambrose! Are you okay?”

And then the doctor and the elevator both disappeared, as the out-of-date paint of the new Oppenheimer School was replaced by a bloodred sky. In the distance was some sort of huge fortress made of shining black stone and surrounded by a landscape devoid of any other signs of life.

Fort stared around him in horror. What had just happened? Where was he? Had the people who made the dome just reached out and taken him? But even if they had, where had they brought him?

Maybe this was some kind of dream, or Mind spell? He touched his arm, and it felt solid enough, as did the dusty ground beneath his feet.

“HELLO, FORSYTHE,” said a voice from behind him, the power of it vibrating in Fort’s chest. His heart began racing even faster, and he slowly turned to find a cloaked creature floating in the middle of the air.

Or at least he assumed it had to be a creature, because it had spoken. Only there was nothing beneath the cloak, which was covered in glowing black symbols. There was no physical body at all, just what looked like a face, or maybe only eyes. As he stared, the cloak seemed to pull Fort in, the world kaleidoscoping around him, as he found himself almost drowning in a thousand different versions of himself. There he was with his father holding him as a baby, and Fort felt every cry he made. Another vision hit him, this time the first day of kindergarten, and he was flooded with too many emotions to deal with, from missing his father to excitement about his new school.

And then he was in D.C., and a giant, scaled hand was driving out of the ground. Terror struck him like a blow, and he couldn’t breathe, couldn’t speak, could only watch as the hand pushed up out of the Lincoln Memorial—

And then the monster disappeared, replaced by a strangely familiar twenty-year-old man, his body glowing with several different colors of light, as if he knew multiple types of magic. Whoever it was smiled at Fort, and for the first time, Fort felt almost a strange sort of peace. The man started to say something, but then the cloak blew out in the wind, cutting off the vision in midstream.

The emotions of it all disappeared along with the vision, and their absence sent Fort to his knees. What was that thing?

“YOU KNOW WHAT I AM, FORSYTHE,” the creature said, and for the first time Fort noticed there were hands at the ends of the arms of the cloak. One hand was covered in a spiked black glove; the other was solely bone, like a skeleton.

James Riley lives in Virginia. He is the New York Times bestselling author of the Half Upon a Time, Story Thieves, and Revenge of Magic series.

"Fans of Harry Potter and Rick Riodan’s books will enjoy the crafted mixture of magic and military life."

"This imaginative and exciting story feels like the start of something big."